At a time when there is limited opportunity for travellers to jet around the world, there is a perverse brilliance in the timing of the British designed, Swiss-made Christopher Ward C1 Worldglow – a source of much-needed light at the end of the tunnel, and that’s before we even mention the lume factor. 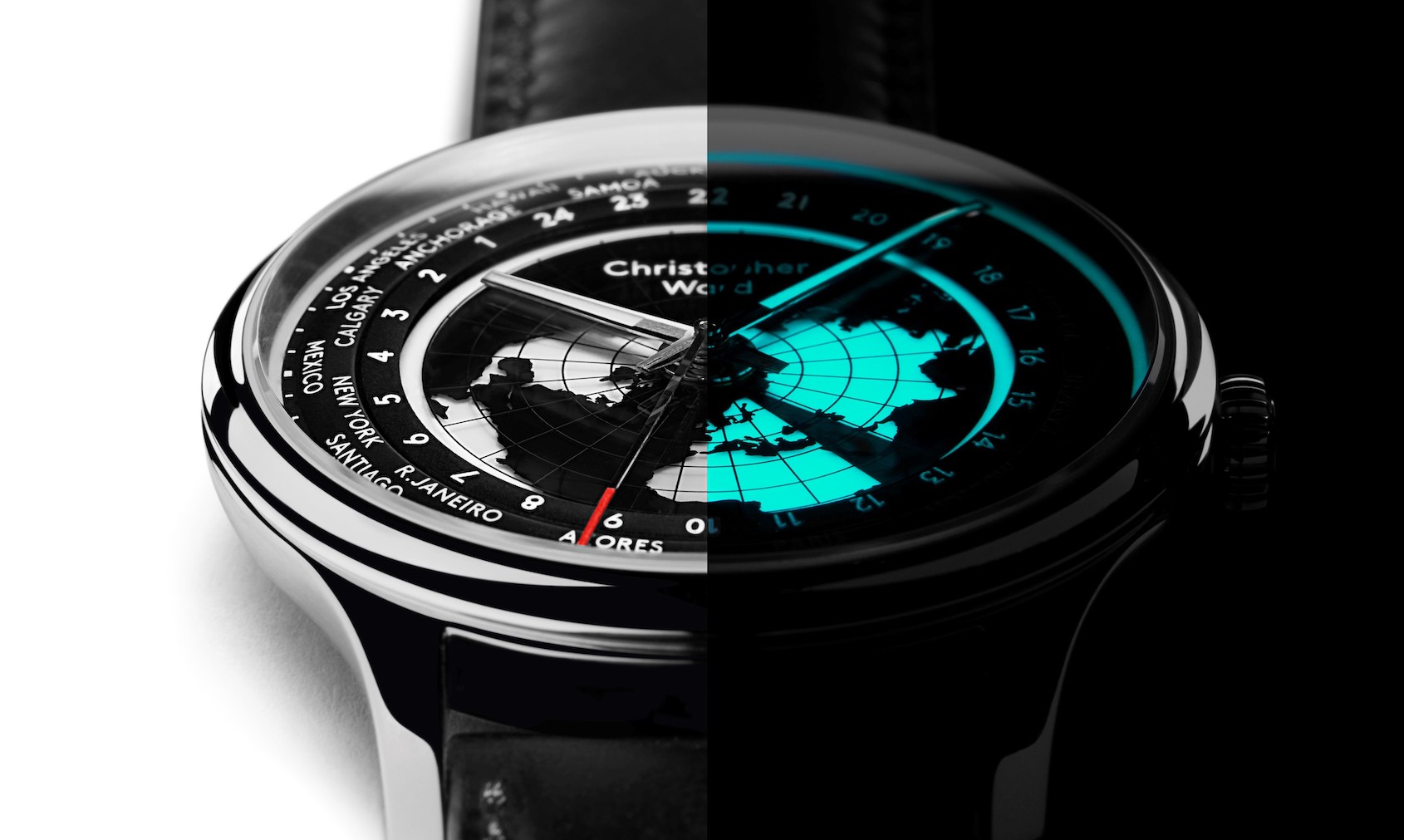 The genesis of Christopher Ward’s latest brainchild comes from its sister watch, the C1 Moonglow, which landed in July 2019. That was released to celebrate the 50th anniversary of the landing of the first Apollo that landed on the moon and was a roaring success for the British brand that only formed in 2005 (from a chicken shed in Berkshire I might add). It is now one of several brands driving a burgeoning UK market forward, thanks in part to co-founder and CEO Mike France (no, he’s not French). 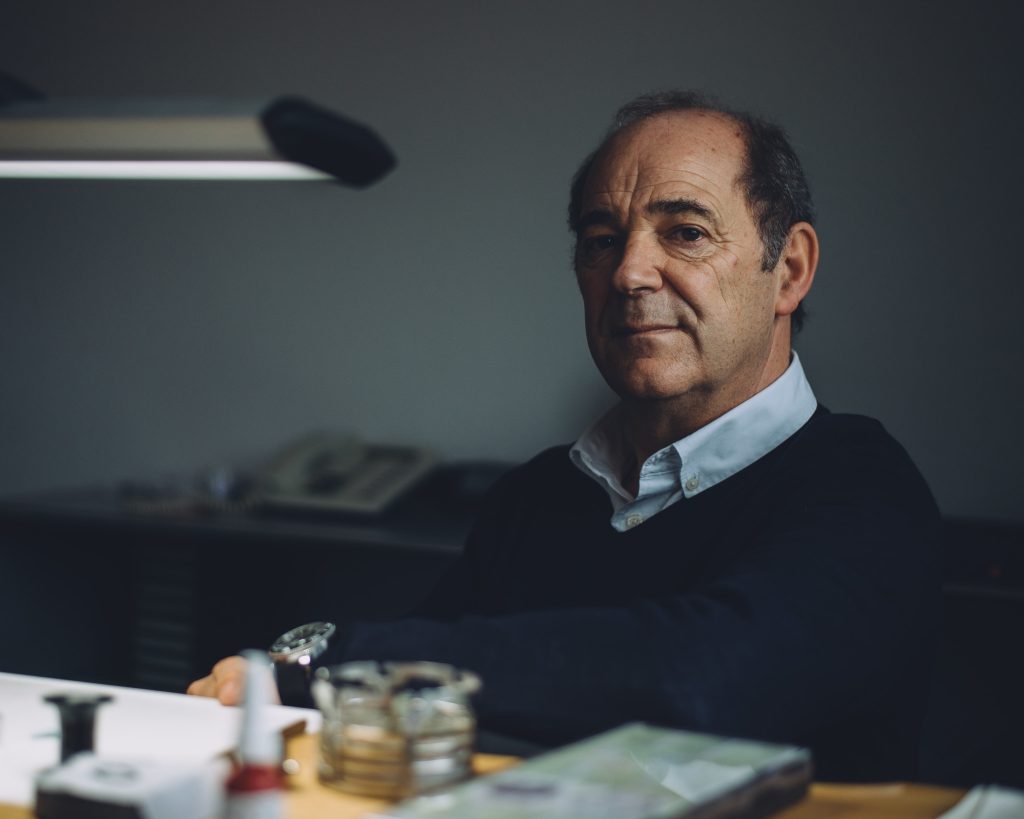 “Building on the success of the C1 Moonglow, we are out to establish an even stronger foothold and put our own flag, if you like, into glow watches that are part of the dress category,” France tells us. “Nobody’s really ever done anything in terms of lume on dress watches. But we thought, ‘How do you spark something new and interesting that we would enjoy wearing in a dress watch?’ And we decided that lume would be a good way to go.”

Anyone who love watches, has got to have a little bit of a fascination with luminosity, and it largely sees itself in dive watches and sports watches but France wanted to go against the grain – something the likes of Jean-Claude Biver has had huge success doing in this industry. 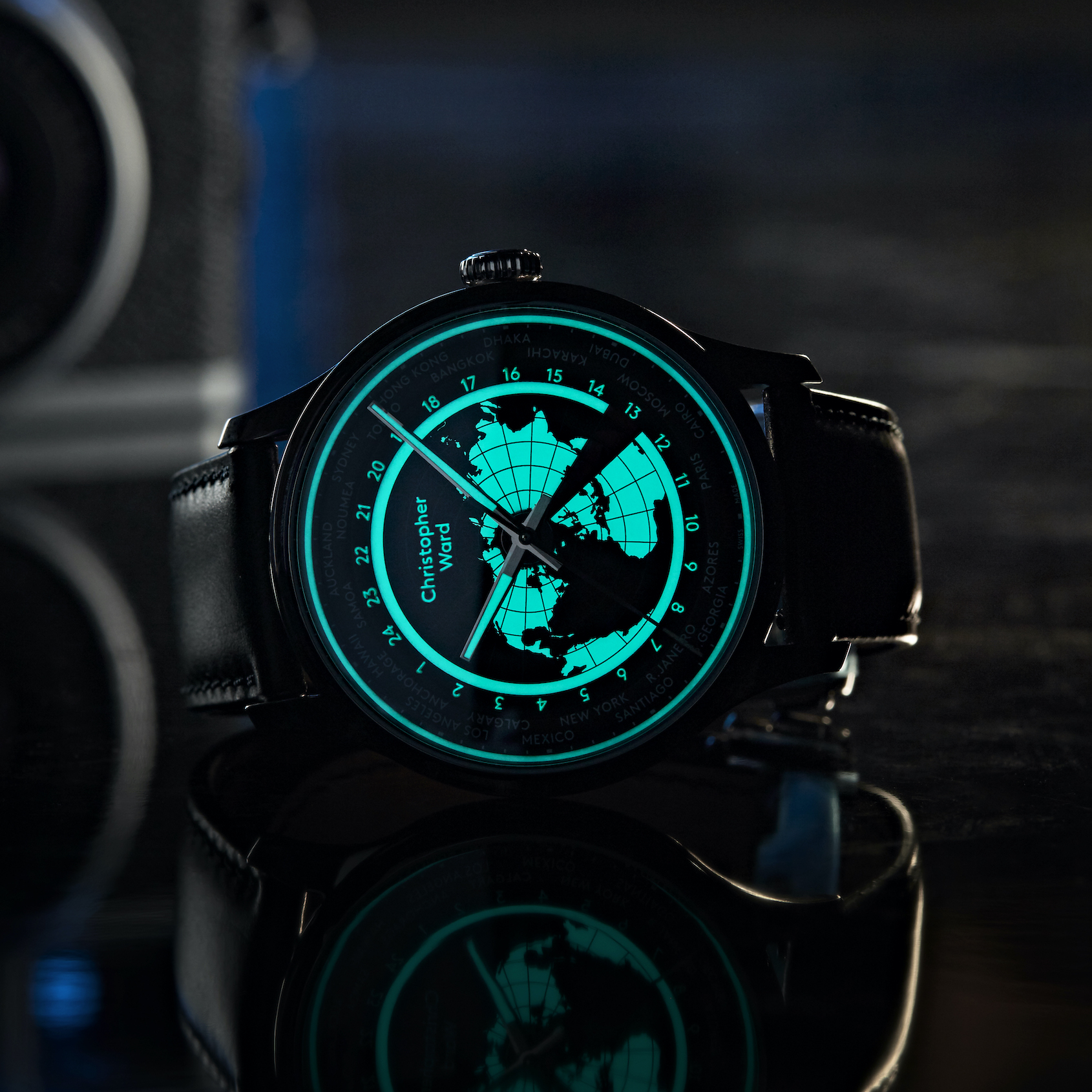 “There’s an oxymoron that I’ve developed called serious playfulness, which is, a watch appeals both to the sort of serious-minded horologist who’s interested in world time and then there are some people who would take a worldtimer, and put that lume together – it appeals to the child in them,” says France, admitting that it very much appealed to the child in him. “When you’re looking at it under full lume, you just want to show people,” he adds. 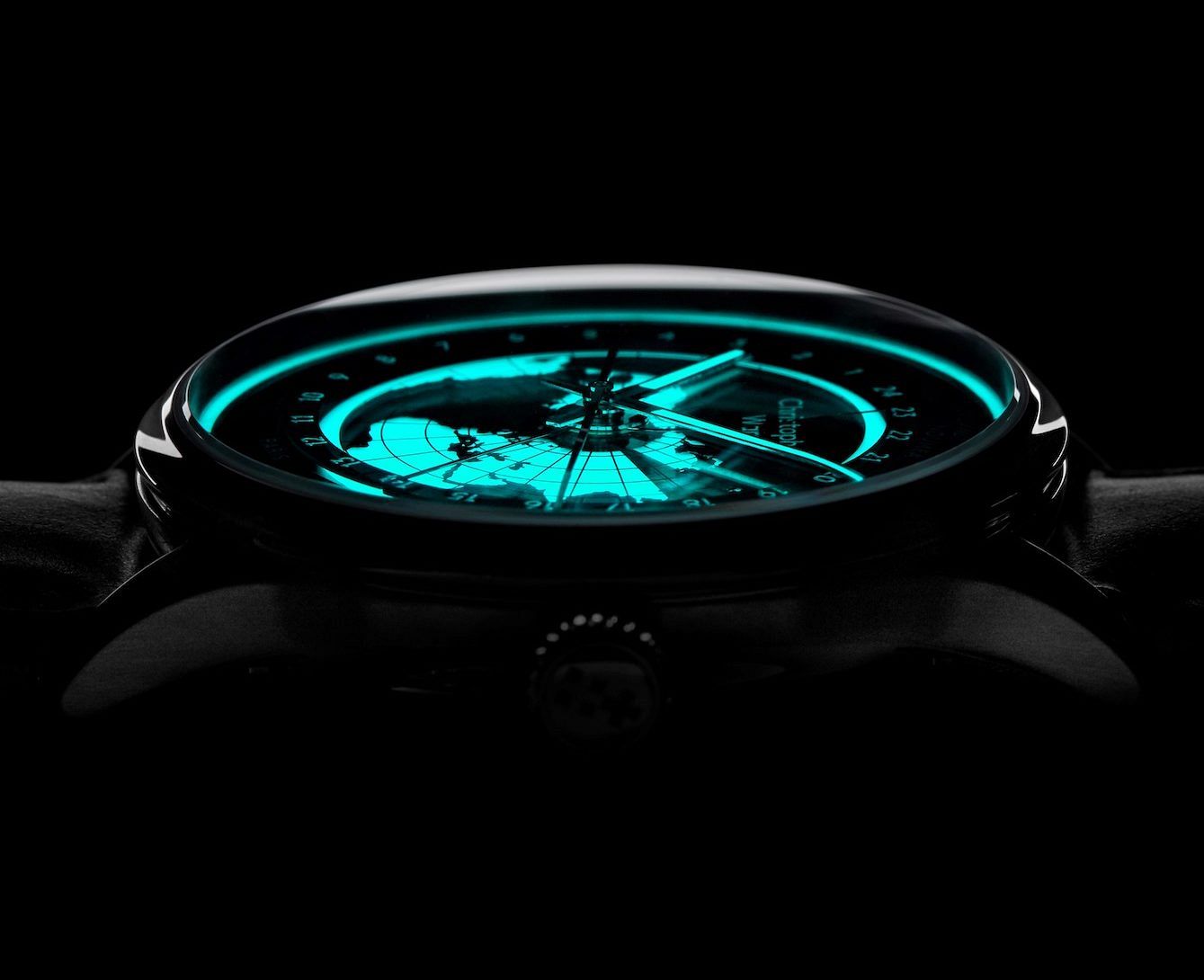 The JJ03 automatic movement is an example of the serious watch geekery the C1 Worldglow possesses. Indeed, it’s the only watch in the world that has the functionality of the city indicator and the red indicator, and it’s entirely Christopher Ward’s own development.

Along with features like the light-catcher case on this piece, the brand is developing an increasing sort of signature for stylish, sleek watches that are punching well above their weight. So without further ado, let’s get stuck into the finer details of this eye-catcher. 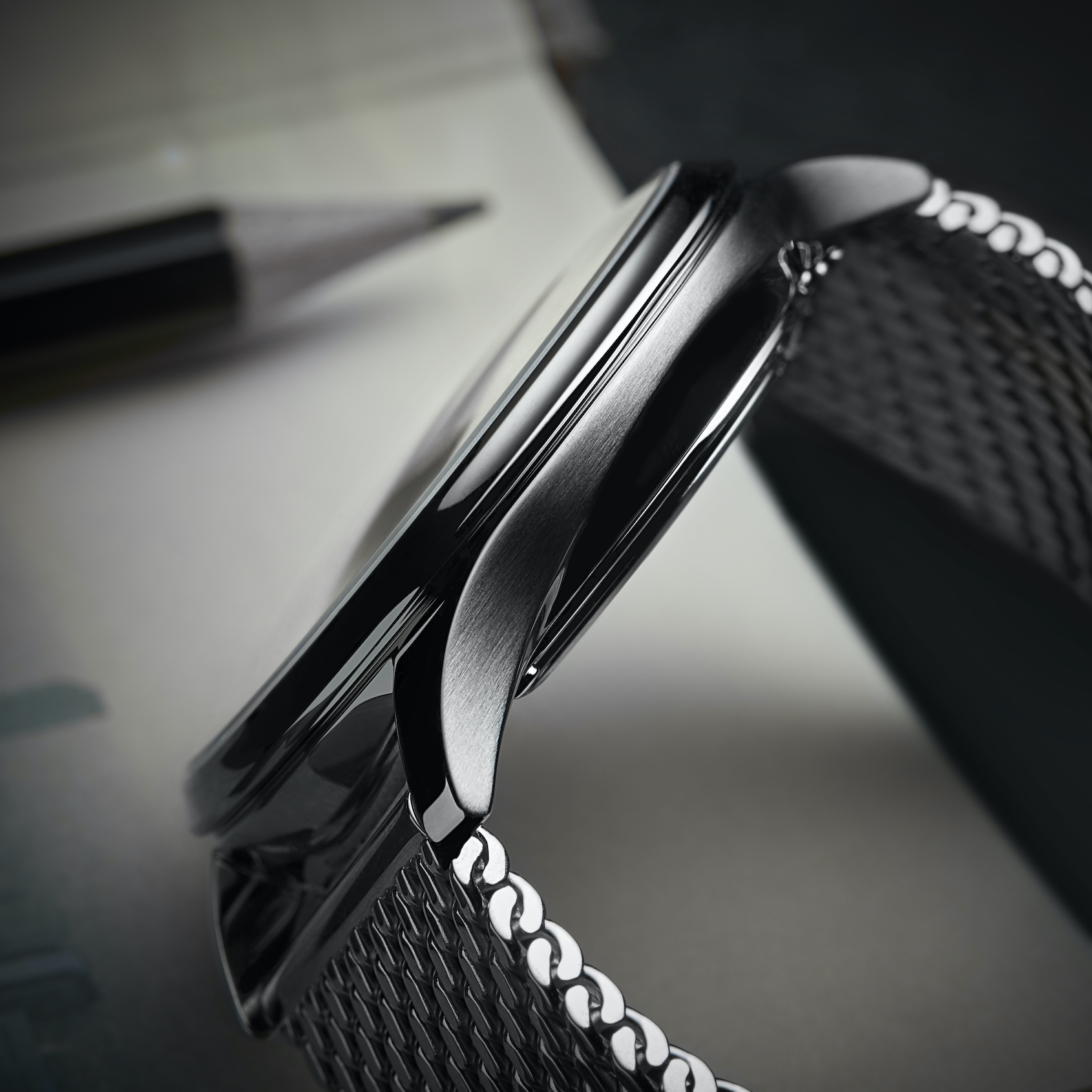 Christopher Ward’s light-catcher case is a trademarked and really advanced case. Not many brands give the case of a watch this level of attention – many tend to be quite simple slab-sided cases – but Christopher Ward spends a lot of time on the architecture on its cases and it represents the confidence the brands has in its own design. The whole premise of the light-catcher is inspired by the Aston Martin DB9. 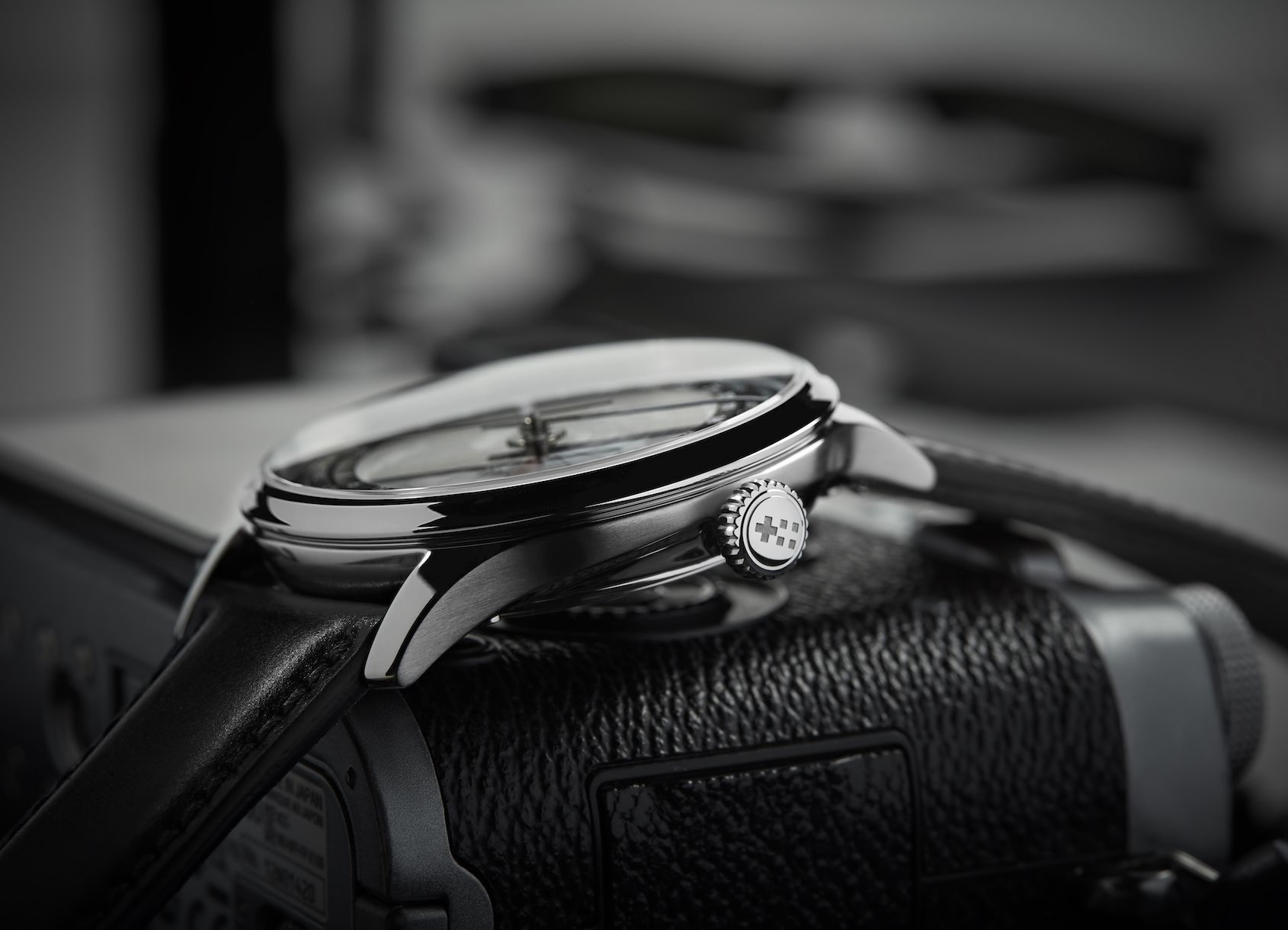 Automotive designers call it the light-catcher in terms of their chassis and their skin because they always want to make cars look lower to the ground. For the C1 Worldglow (and the C1 Moonglow prior), France and head designer Adrian Buchanan wanted a watch that sat lower on the wrist and was more comfortable, while still be quite thick (it’s about 11.5mm). And sit on low on the wrist is exactly what is does, it’s extremely wearable despite being a sizeable 43.5mm in diameter. 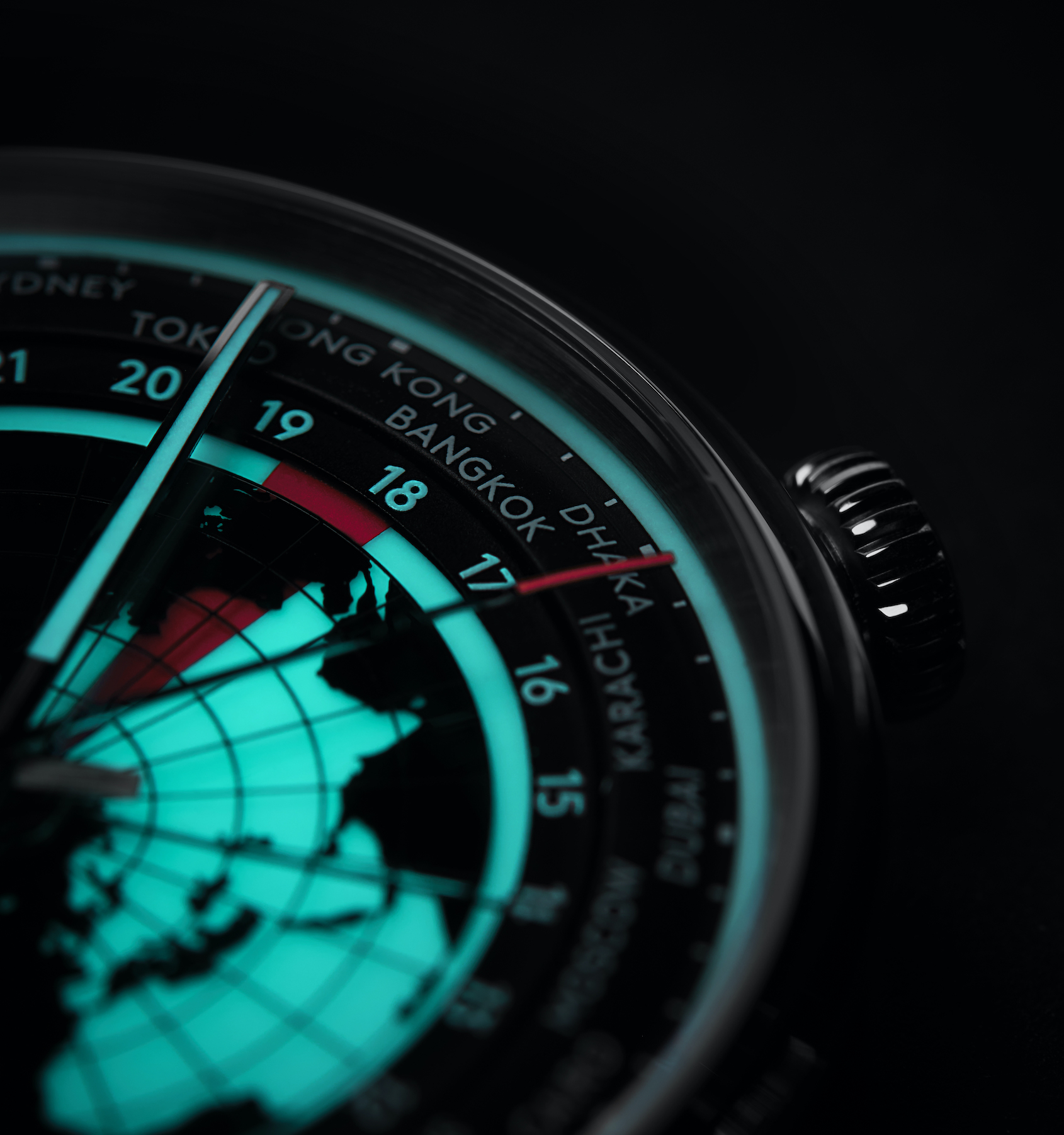 This is where the fun and games are at on this piece. Let’s start by digesting the fact there are three layers of sapphire gracing this dial. The first layer is the black element of the sea and the world, then you have the GMT layer followed by the enclosing sapphire of the watch. When you realise there are three layers of sapphire for the lume to come through, it’s consequentially pretty mind-blowing to see how epic the luminosity of this piece is. According to France, it wasn’t plain sailing in the slightest. They called on a specialist applicator of luminescence for watches in Biel around the corner from the atelier in Biel, who developed a brilliant way of applying Super-LumiNova to watches – Grade X1 BL C1 to be precise. For the travel-minded amongst us, it’s a sweet reminder of all the exciting and enticing places there are in the world for us to visit one of these days, 24 in fact from Sydney to Samoa, Santiago to Cairo. These time zones, all printed numerals, are key to the rotating GMT disc as once it’s aligned to a city, you have the ability to tell the time in two places, with the added benefit of the red wedge, which while bring the only flash of colour to the dial, is also a handy way of gauging the time in your chosen ‘second city. London is also the only city coloured red, and is undoubtedly a nod to its British roots. Back on the lume, it’s also worth noting that the hands and numerals are also lumed up to the max, meaning you are able to tell the time in low light. 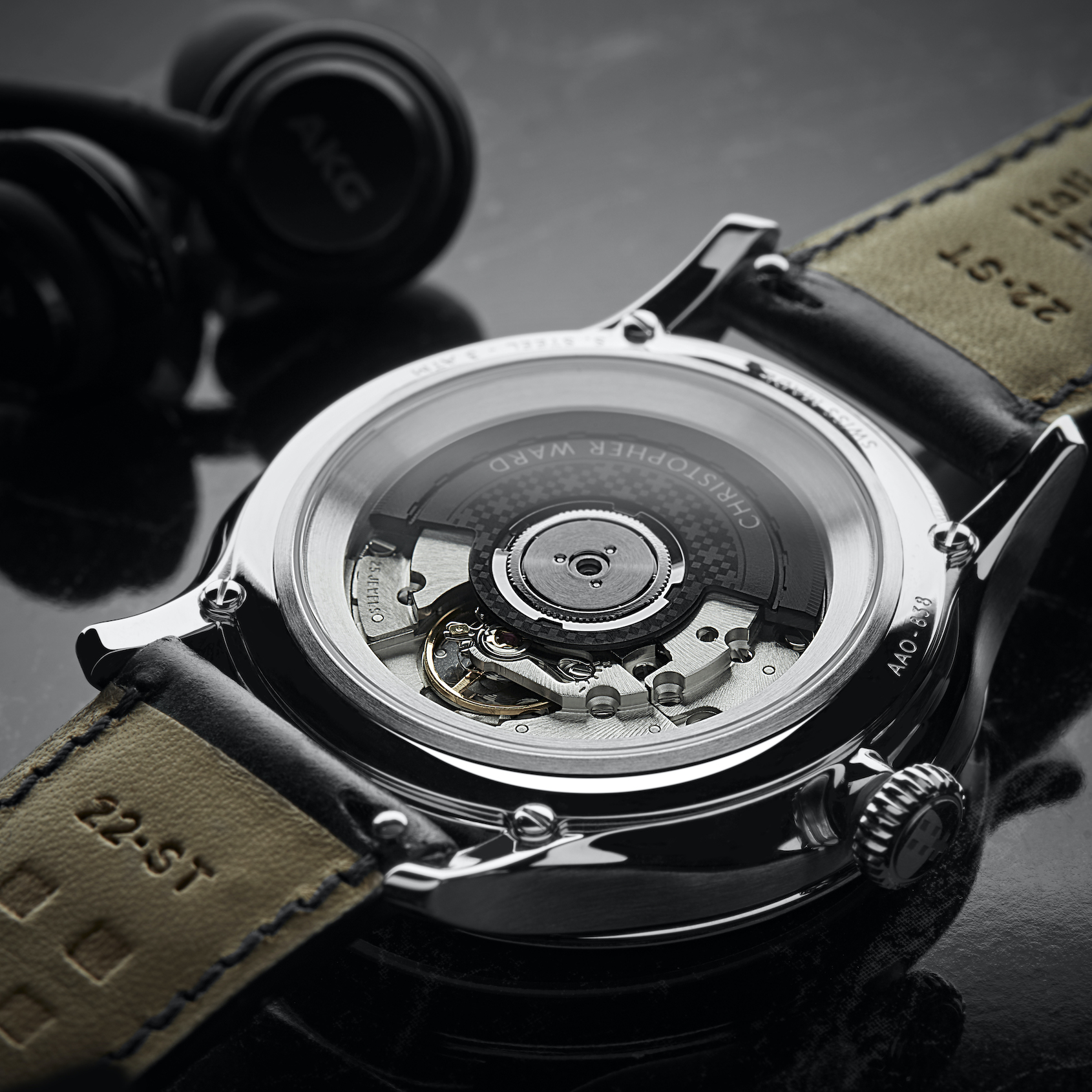 The movement, although but no means the main talking point of this piece, is still great. It’s built on an SW330 – a modification of the hugely respected Sellita SW330 GMT calibre – with Christopher Ward’s own module on top that turns it into a JJ Calibre and gives the additional functionality, so it’s a good unit movement in that sense and it’s always a bonus to be able to see it working in all its glory thanks to the transparent exhibition caseback. 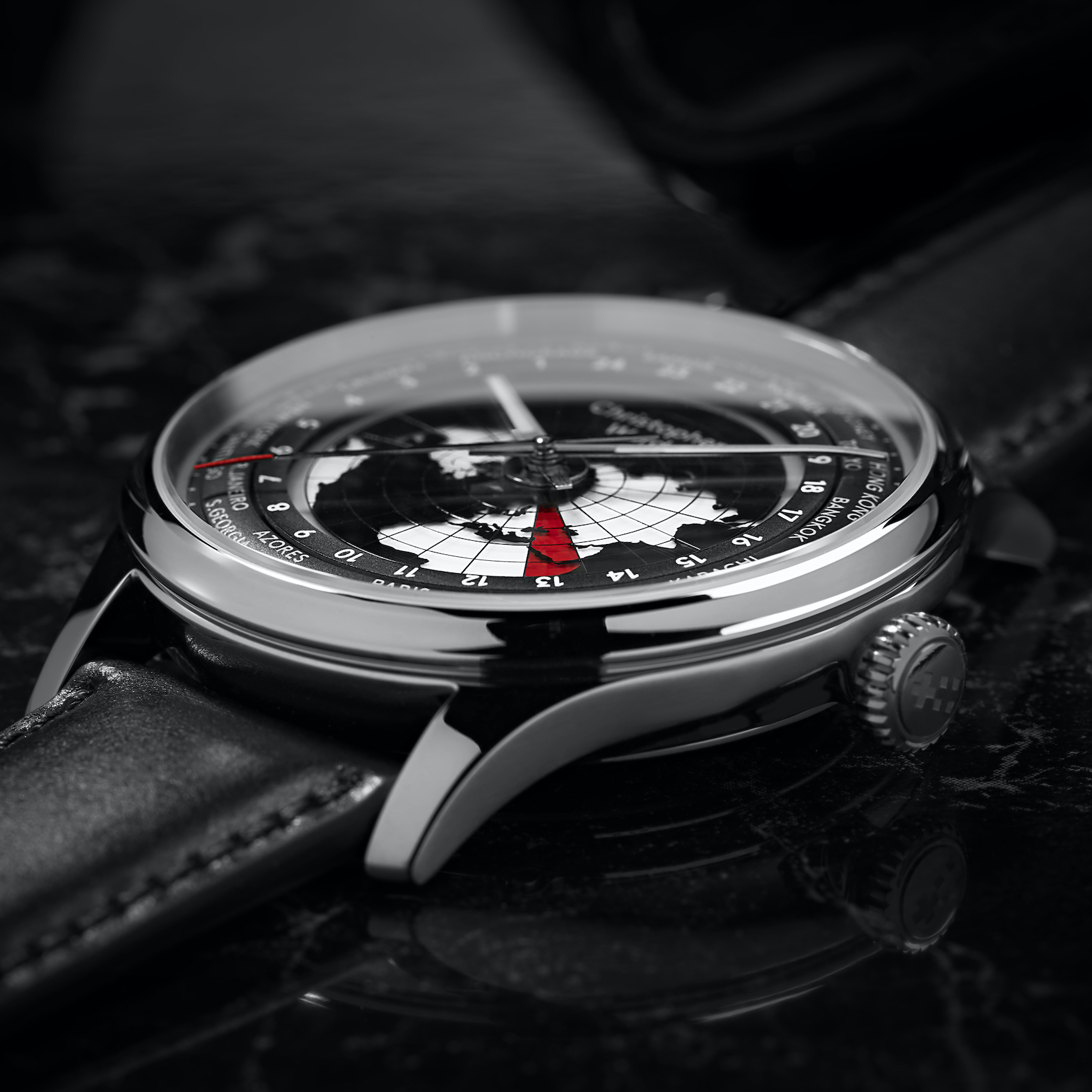 Many British watch brands are becoming rather synonymous with playful injections of colour, be it on the dial or through nato straps but Christopher Ward keeps things classic with a lovely black cordovan leather and clasp. It’s a sleek finish to a very gentlemanly watch. 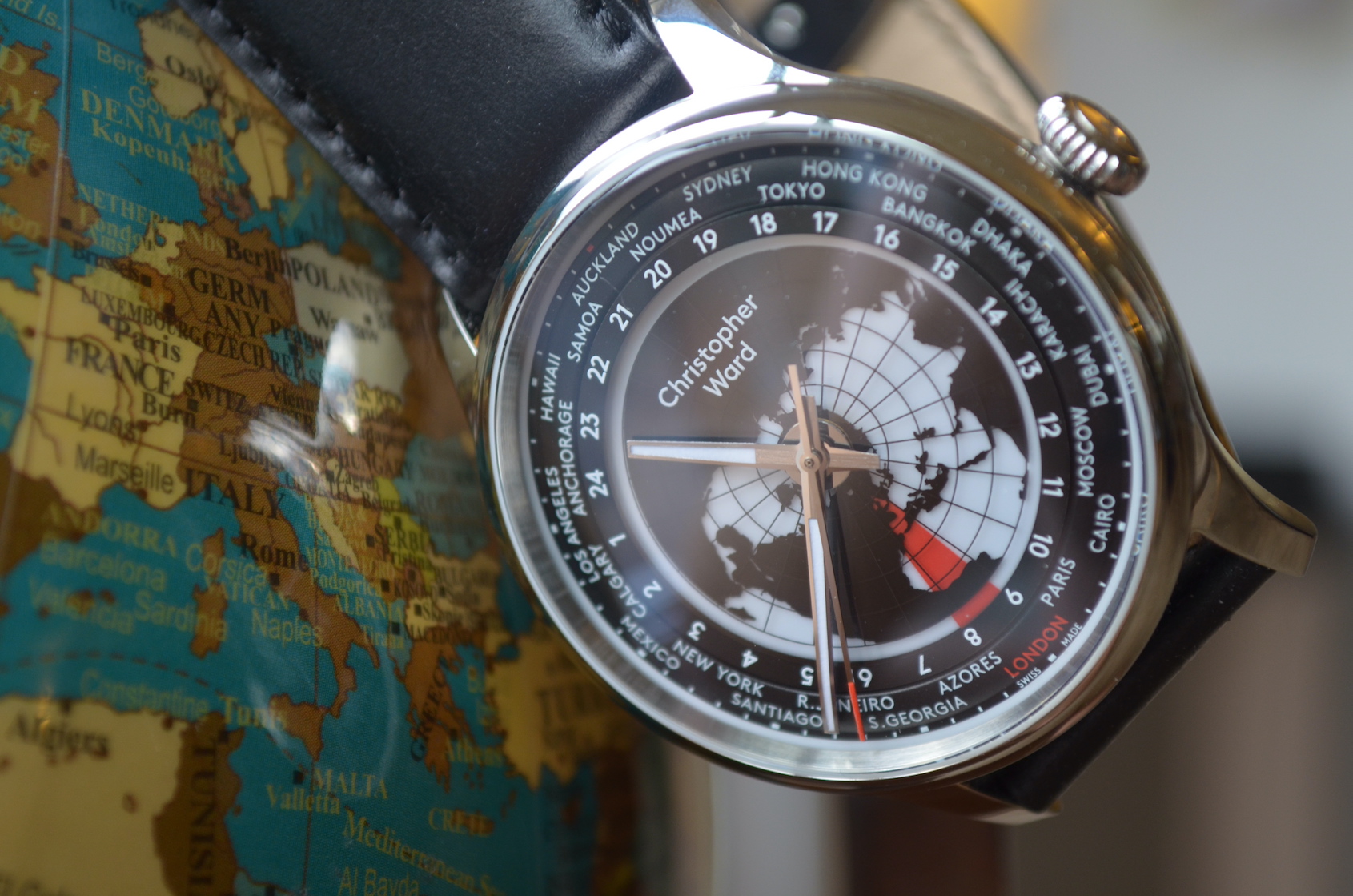 Going back to what France said, it’s the serious playfulness that makes this watch something of a gamechanger. Dress watches haven’t exactly needed to be wore much in the past 12 months or so – because no one’s been dressing up to go anywhere. But I think the lume factor, combined with everyone’s palpable desire to travel once more, makes this a very appealing addition to your watch collection. 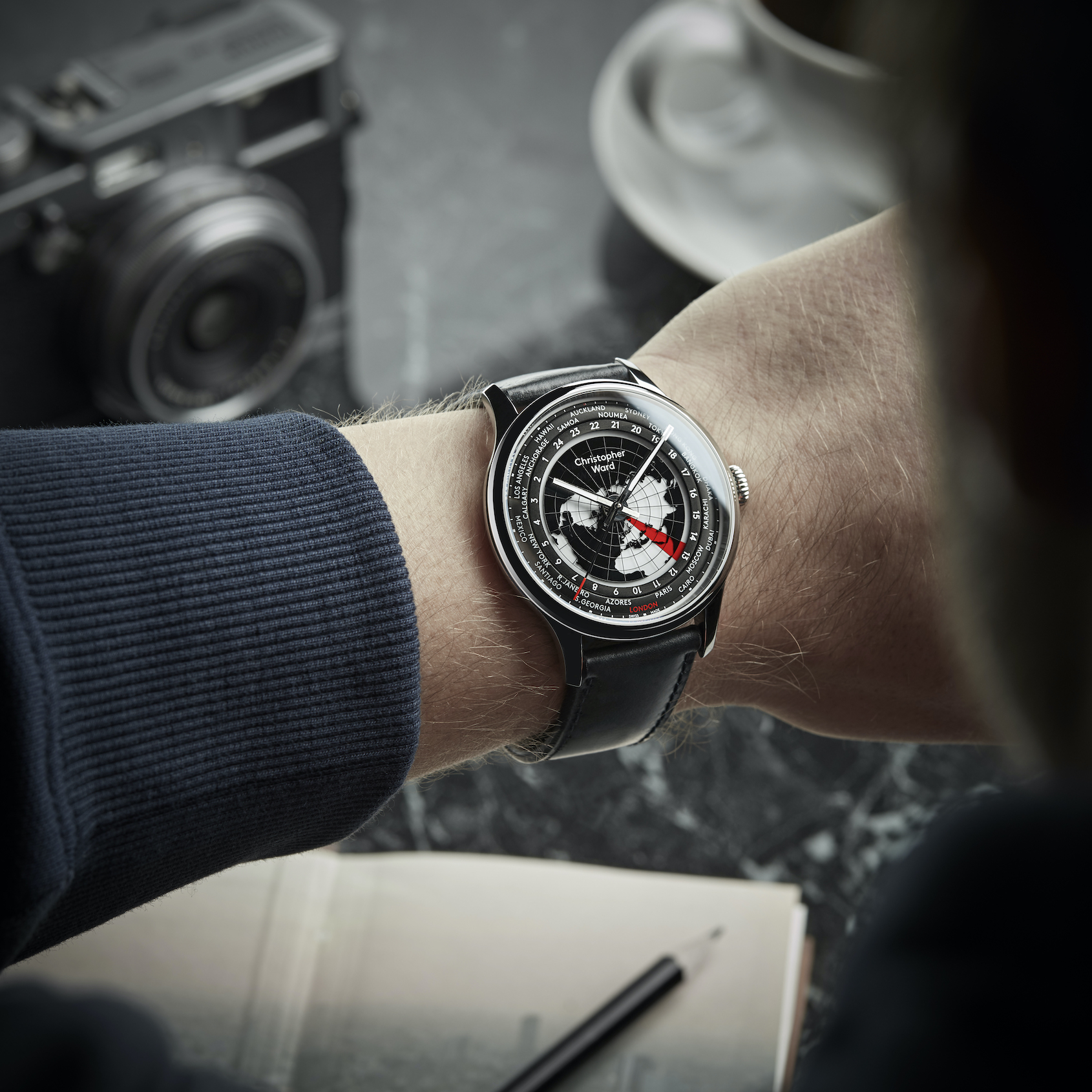