As someone whose love of watches is focused entirely on mechanisms powered by springs, the word quartz normally evokes the immediate cry of “Next!” So when I stop and spend time with a quartz watch, it must be a bit special. 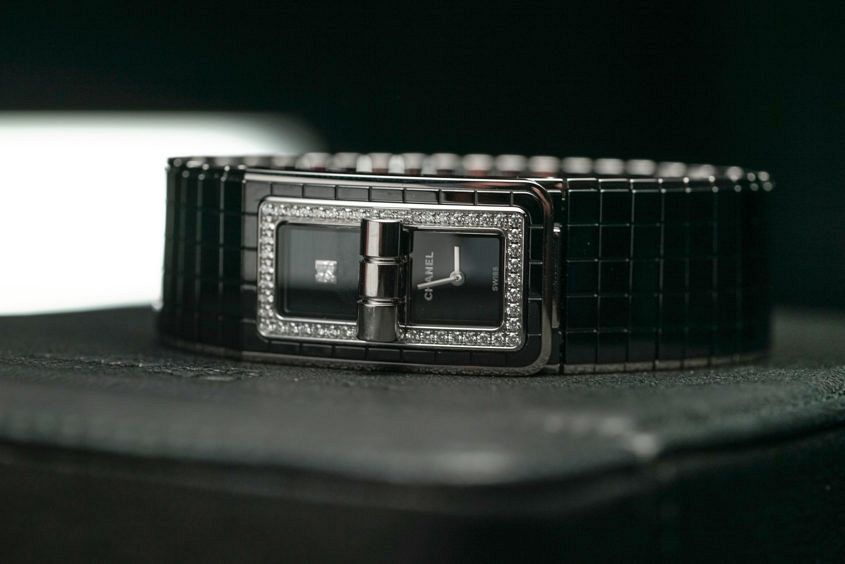 And so to Code Coco. It had me at first glance: that crisp, chic and utterly modern design. Strong, straight lines, no colour. Just a broad band of glossy black with a touch of polished steel and a taut line of diamonds – the bracelet and dial flowing seamlessly into one another. Watch or jewellery? It didn’t really matter. It was a beautiful thing and it had me instinctively reaching to pick it up and put it on my wrist. 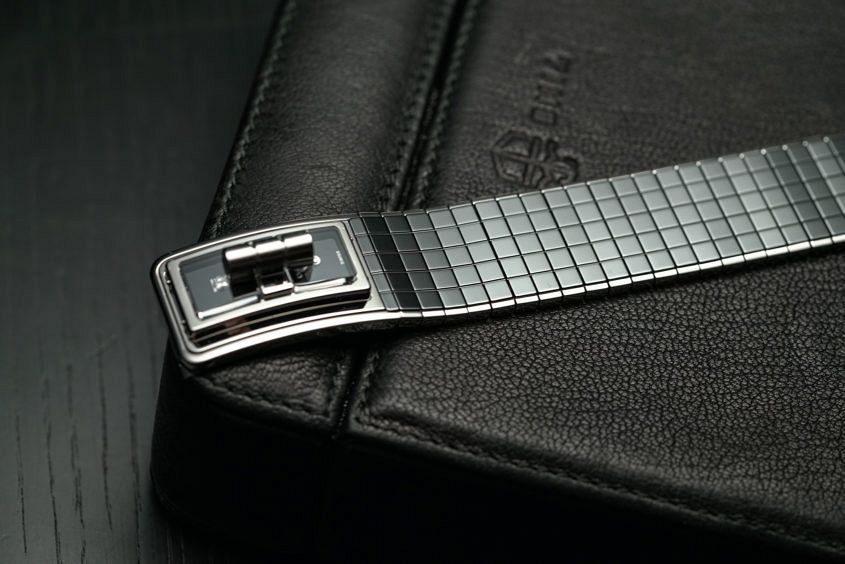 And once there, those little cubes of ceramic that form the bracelet draped around my wrist so fluidly that it could have been a ribbon. It’s not quite the other-worldly feeling of Bulgari’s Octo Finissimo titanium bracelet (nothing could be), but it comes close. Very close. And believe me, that’s almost off the scale in bracelet-praise terms. Add to that, the light weight and high scratch-resistance of Chanel’s best-in-class ceramic (a pioneer in its use for watches, it has had almost two decades to hone the technology) and you have a bracelet as functional as it is beautiful. 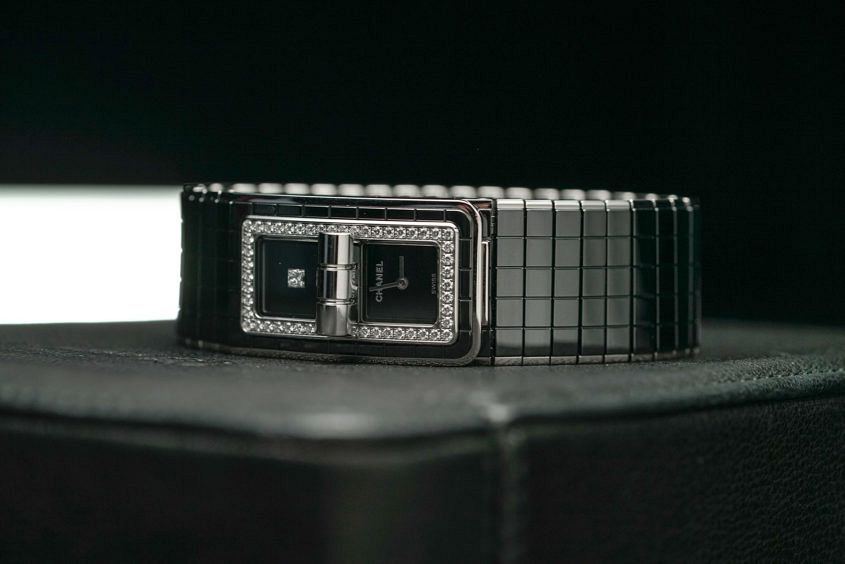 A great strength of Chanel over the past 35 years is the way that its creative teams in all disciplines have worked and reworked its iconography in clever and original ways – always fresh, never repeating themselves – and its watches are no exception. After the chain-and-leather bracelets of the Première, and the camellias and Coromandel-inspired décor of its haute horlogerie collections, Code Coco takes it up a notch.

As the collection’s name suggests, this is ALL about the codes. While those ceramic cubes that form the bracelet are a nod to the famous quilting on Chanel’s bags, the visual focal point – the clasp – is the wittiest interpretation yet of those familiar design codes. Far from being the functional after-thought, hidden under the wrist (as the buckle is on most watches), the clasp is the essence of the thing. The fastener of the celebrated 2.55 handbag has been transferred directly – almost literally – to form the double dial. 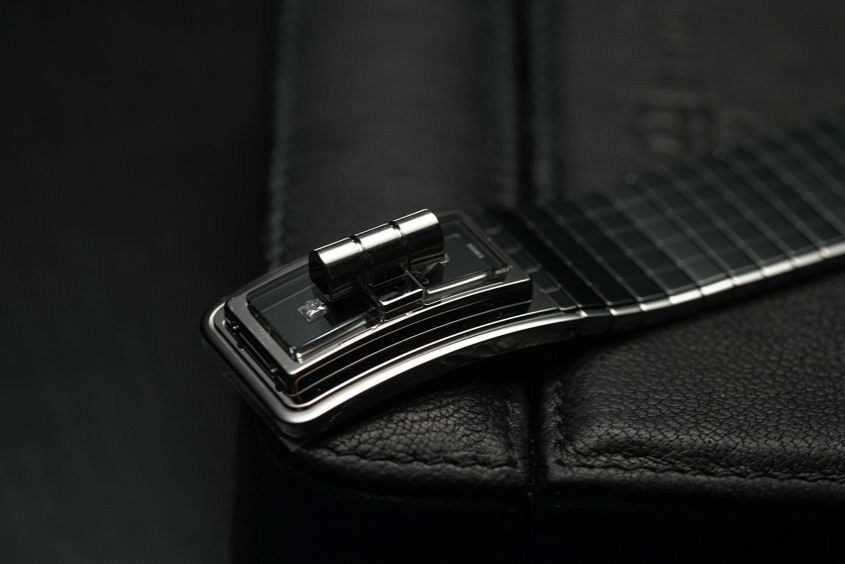 The rectangular ‘frame’ of the handbag clasp forms the bezel (set with round-cut diamonds on this model but available without, if wished) and the small cylindrical closing mechanism slots into an aperture between the two dials. A gentle lift and 90-degree twist locks it into place with a precise click, exactly as it does on the bag.

Complementing the glossy ceramic of the bracelet, those dials are deep black lacquer – one with the hour and minute hands, the other with a princess-cut diamond in the centre. Clean, graphic and very strong. 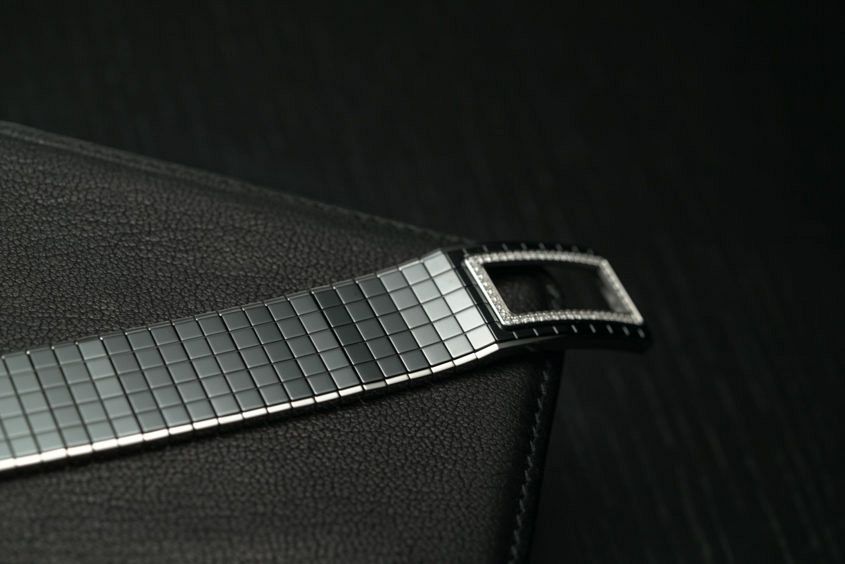 While Code Coco has been created by a fashion house (and has a quartz movement), it goes so far beyond what the term ‘fashion watch’ usually means. It’s beautifully made and its design has been incredibly well thought-out. Witty, modern and infinitely wearable, it may just have the makings of a future classic – as recognisably Chanel as the J12 and the Première.