There’s no shortage of icons in the realm of pilot watches with aviation forming a key part of human achievement over the last century. There is arguably no stronger example of watches being used as indispensable tools, a notion which is increasingly romanticised as the humble watch becomes more of a style accessory over the years. It therefore makes sense that Hamilton, a brand with a proud American history stretching back to 1892, is still pushing the envelope when it comes to tactical and functional pilot watches in the form of the Khaki X-Wind. 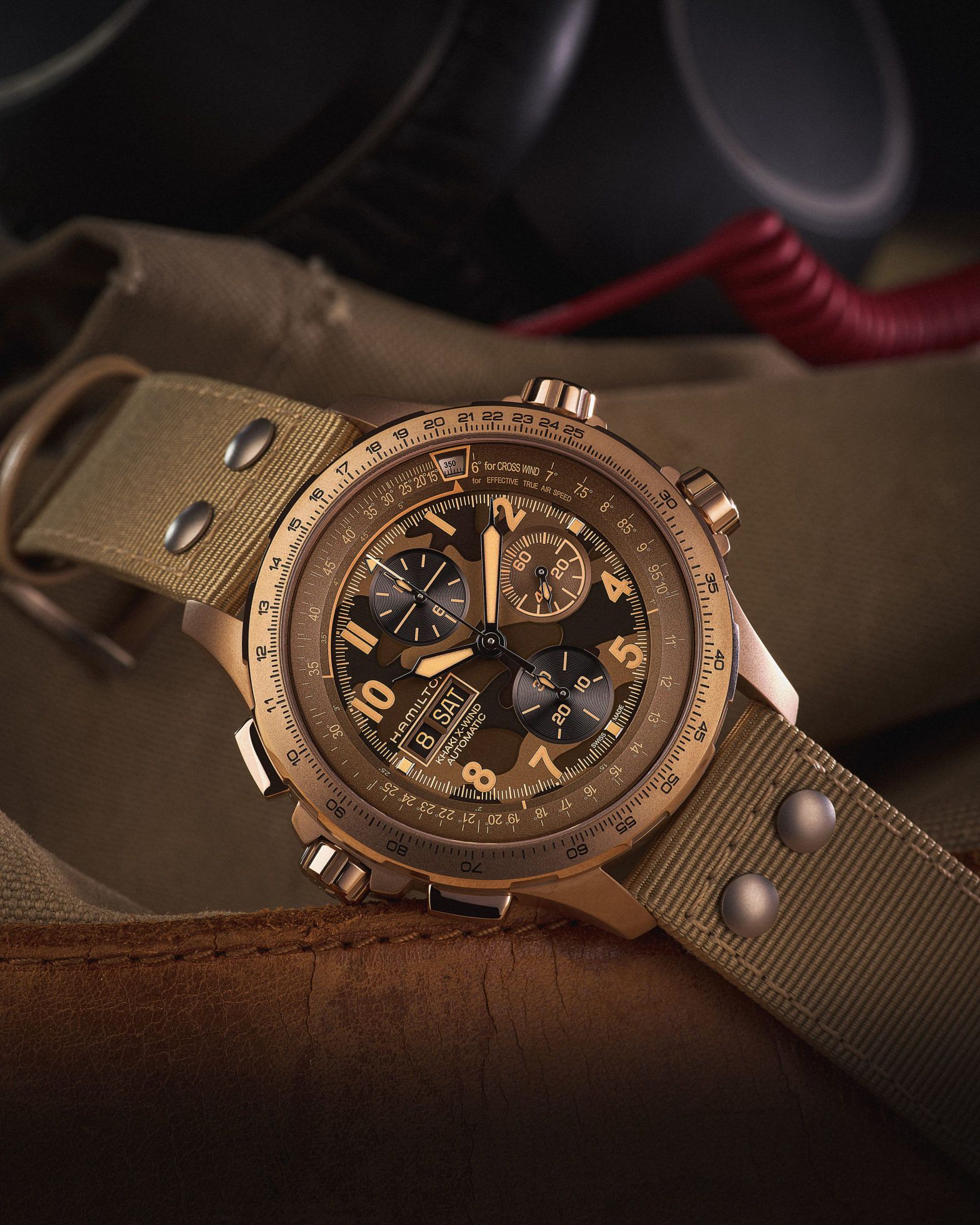 Of the three watches to be released, Hamilton have two styles covered. The least radical is still a visual feast, with a deep, cold, blue sunburst dial complimenting the crisp white dial print, stainless steel hardware, and dashes of red detailing. For someone who appreciates the dressy-sports look and can pull off the 45mm diameter, this reference is sufficiently versatile for all but the most formal events.

The other two watches lie much more on the tactical extremity. Camouflage dials echo their military origins and dare to play more with colour. The Day Date is more “conservative” with a drab olive green, typical for US military and field watches evoking the 1970s and later. It also uses simplified broadsword hands, not only playing into the armed forces theme, but also allowing for increased clarity when reading either the minute track or the smaller ring of 24 hour markings. 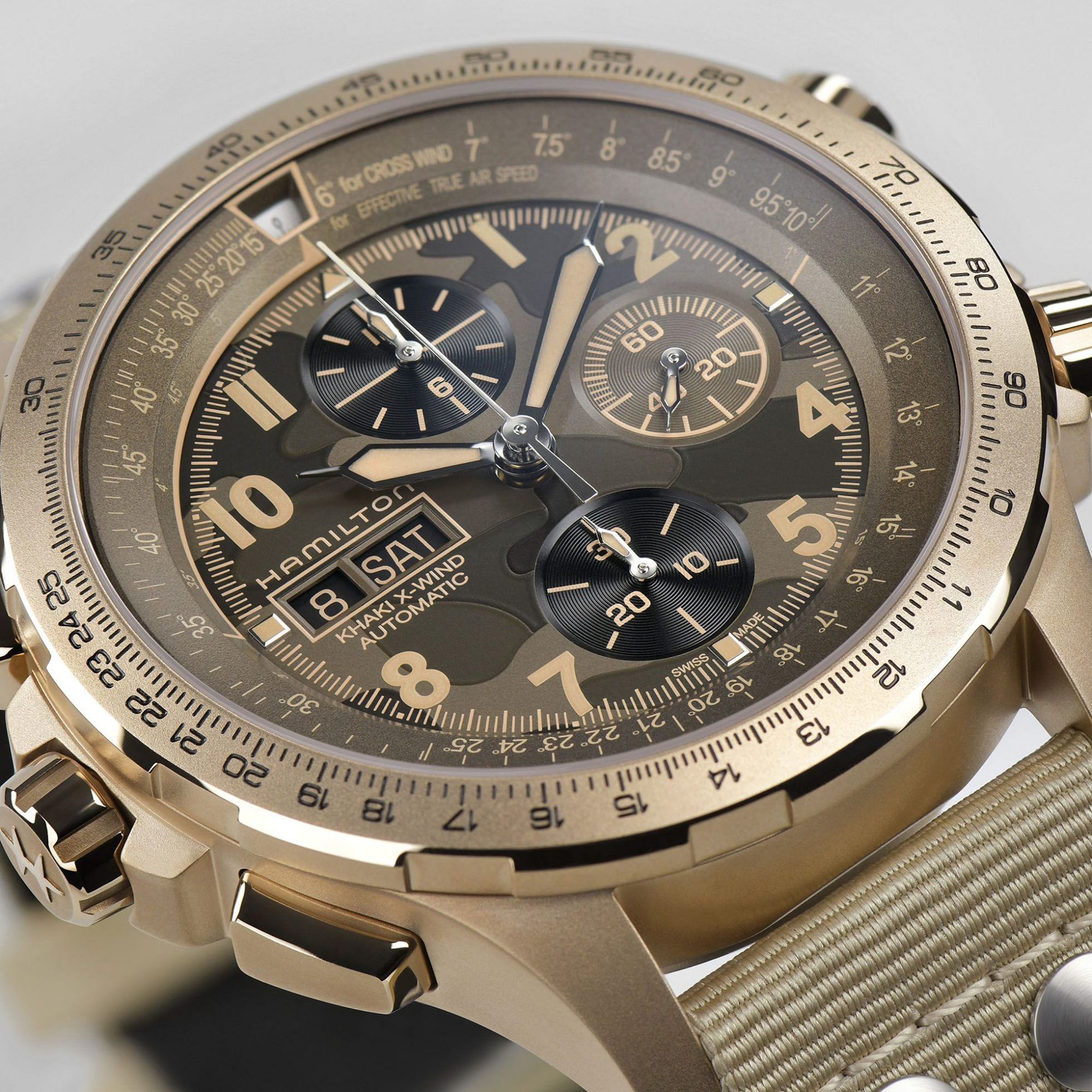 But the real standout is the chronograph in sandstorm beige. While monochromatic themes generally don’t go hand in hand with easy time reading, the warm and rustic tones of the camo-dial are actually very easy on the eye despite their visual complexity. The only parts to break the tonal uniformity are the silver hands, but they do create a nice balance with the steel rivets in the strap and also help legibility. The use of faux-patina instead of white printing is undeniably an aesthetic choice rather an ageing effect, which ties the whole watch together in a strangely satisfying way.

Powering the X-Wind chronographs is Hamilton’s caliber H-21-Si, a modified version of Swatch Group’s ubiquitous ETA 7750. Although most modified movements can be as simple as a customised rotor weight, Hamilton do things differently. There are two key differences between the 7750 and the H-21-Si. An increased power reserve, all the way to a mighty 60 hours, is particularly impressive considering that the 28,800vph beat rate remains in tact. It also boasts a silicon balance spring they call Nivachron, increasing the magnetic resistance a watch needs when surrounded by aviation instruments. You may only be able to call it an “in-house” movement on a technicality, but for the price of the watch and its fit-for-purpose customisation, it remains a fantastic option. The Day Date runs Hamilton’s H-30, which adds the day display complication to the ever-lauded H-10. Its power reserve is even larger at 80 hours. 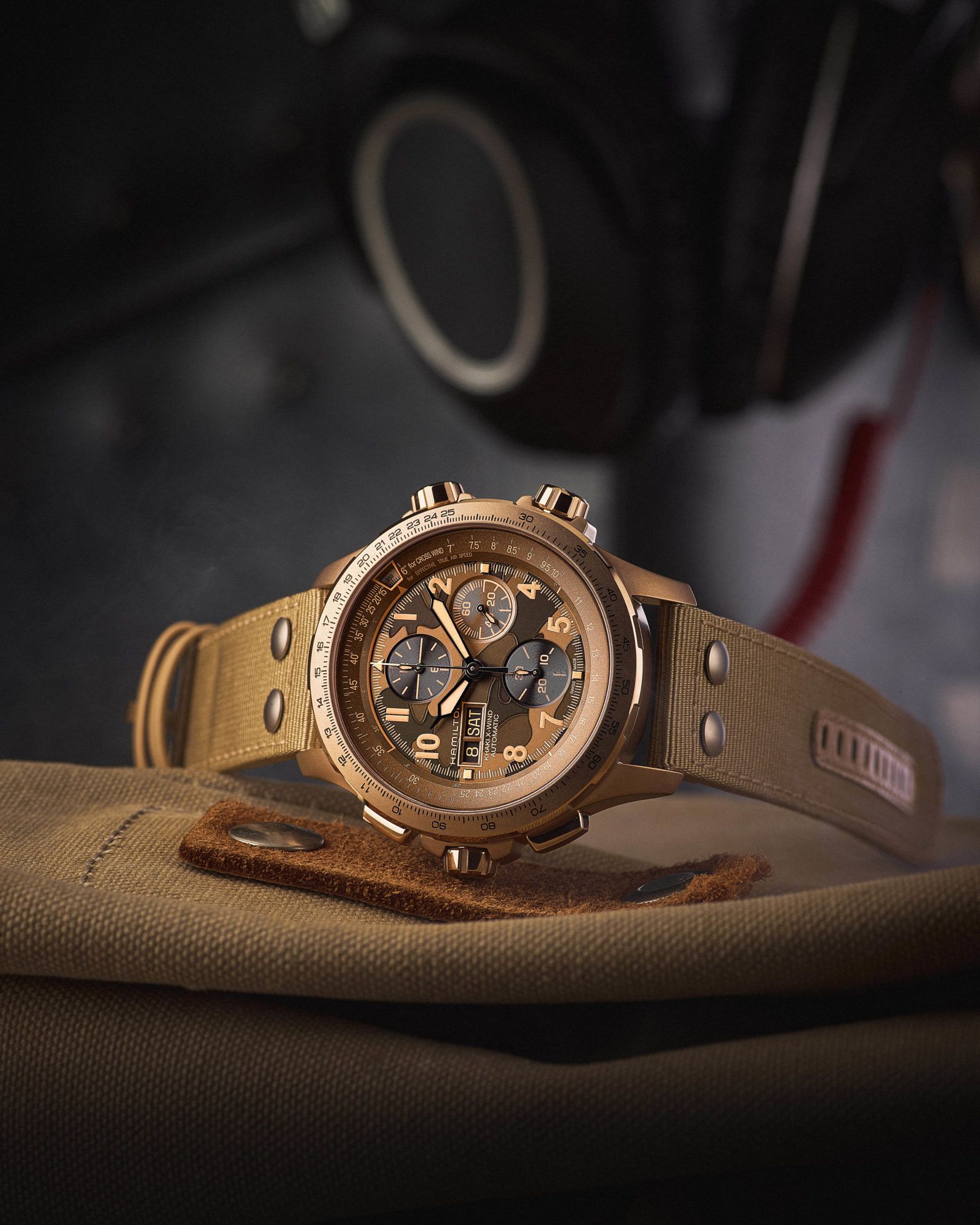 While all three of the cases are bulky at 45mm, and the lugs certainly don’t shy away from extending either, the Day Date version appears as the smallest because of its lack of chronograph pushers. The three crowns operate as you might expect, with the screw-down crown at 9 o’clock operating the time and date setting functions. The other two crowns adjust the inner rotating bezels, but we’ll get back to that later. The blue dial version is a mostly brushed steel finish, with small polished details catching the light and adding to the dressy qualities, while the other two references are coated with a brown and sandstorm beige PVD treatment. The chronographs are 14.85mm thick, although nobody would buy a modern military chronograph for its daintiness, and the Day Date comes in at a very wearable 12.8mm. 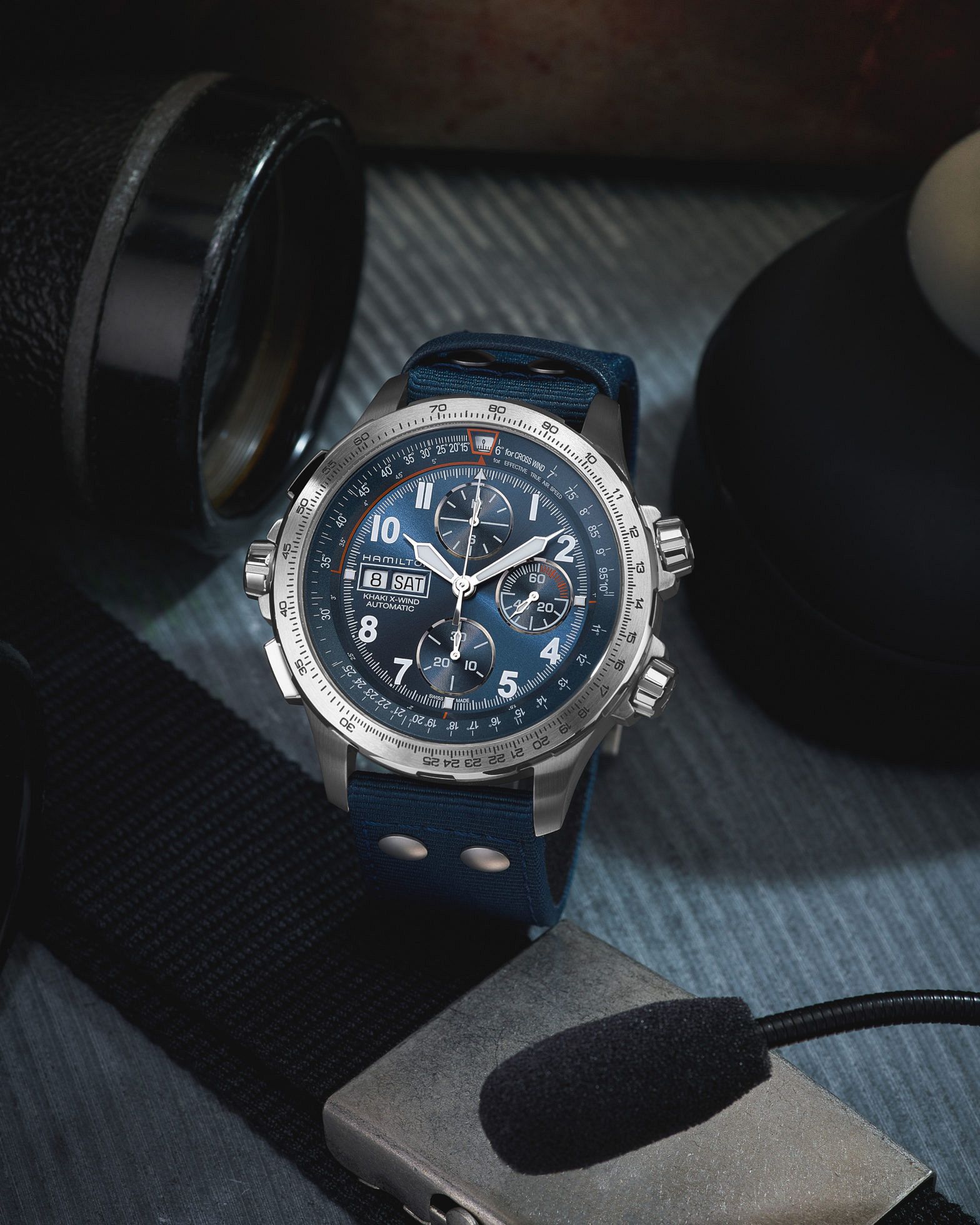 All references come with a colour-matched textile strap and a simple pin-buckle clasp, their dual-rivets calling back to classic pilot watch design elements. But, if that look isn’t for you, the 22mm lug width is more than friendly for trying out some other options, such as NATOs or leather straps.

When discussing the bezels on these watches, it’s not just about reviewing the details of the brushing or the application of text. Through the no less than three bezels on the Khaki X-Wind, Hamilton have derived a new complication that can calculate “the bearing corrections to apply in case of crosswind”. Now, I’m no pilot. In fact, I have a fear of heights. However, reading the manual and working out some calculations is a fun way to daydream about being the kind of person who needs a watch like this. The two inner bezels are stacked on top of each other, with a small trapezoidal window cut and bevelled out of the upper bezel so that you can see a single number from the lower bezel. One must reset both bezels so that the red arrow is pointing to 12 o’clock, and so that 0 degrees is reading on the lower bezel. The pilot then obtains the wind speed and direction from a control tower or weather chart, and then using the aircraft’s speed they could calculate the craft’s magnetic bearing, the crosswind angle, the crosswind speed, and the angle of drift. If it sounds complicated, that’s because it is. But, on a watch like this, complexity is half the fun. 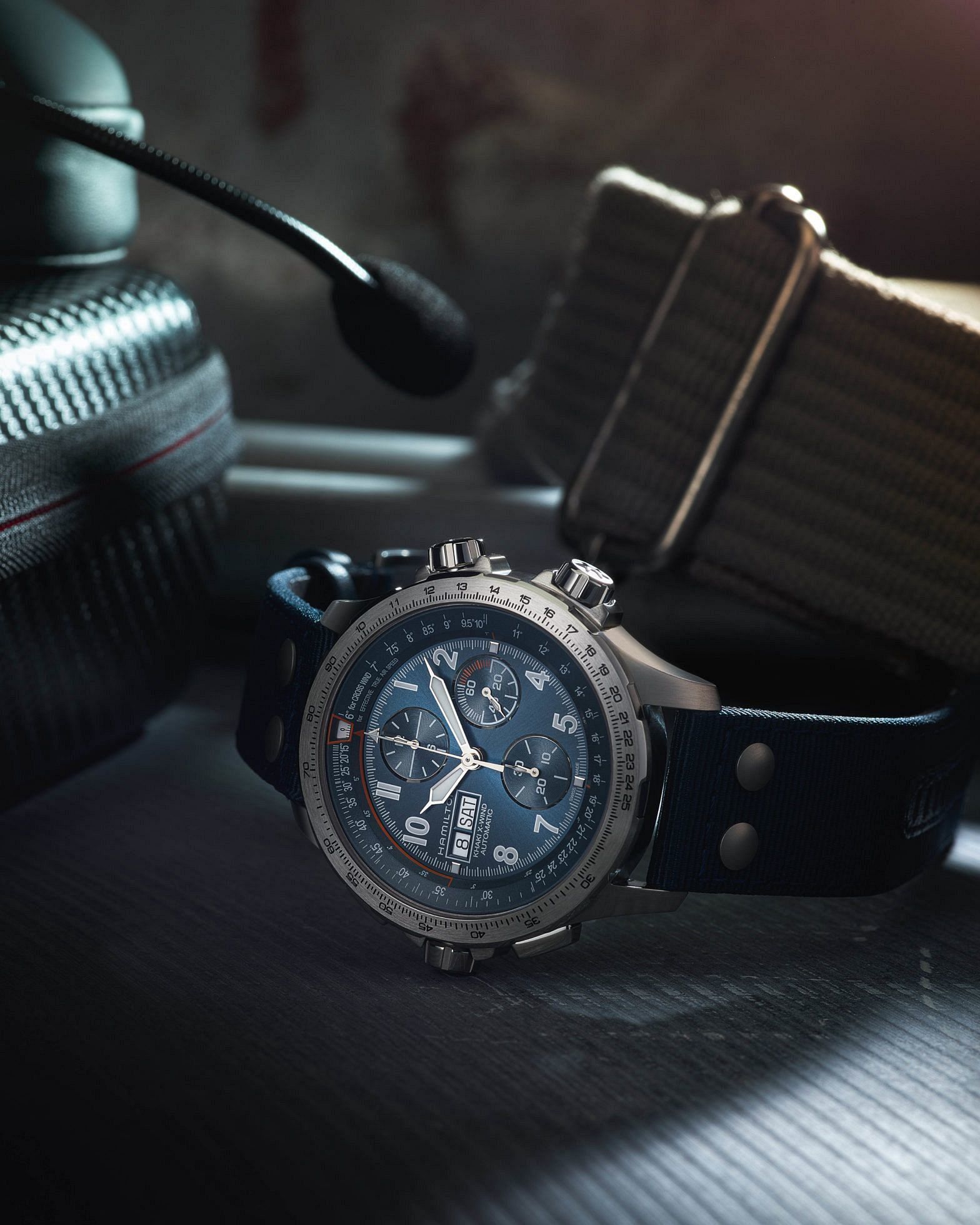 Hamilton’s Khaki X-Wind range manages to take a niche genre of watchmaking and narrow it down even further, somehow without totally alienating anyone who looks at it. As a visual work, they are strong pieces with a lot of presence, but aren’t so wacky that you wouldn’t want to wear it on a day-to-day basis. If you’re looking for a flight-oriented complicated watch then the Khaki X-Wind is undoubtedly a strong option to consider.