Editor’s note: Making a unique and interesting timepiece is always a hard task, especially if you’re a nascent watchmaker that doesn’t have anywhere near as many runs on the board as the stalwarts of the industry. What’s harder, still, is making an idiosyncratic timepiece that also needs to meet the demanding rigours of a fit-for-purpose dive watch. But that’s exactly what independent Canadian microbrand Halios did when they unveiled the Puck II way back in 2017. We were fortunate enough to go hands-on with the overtly round dive watch upon its unveiling, and these were our initial impressions: 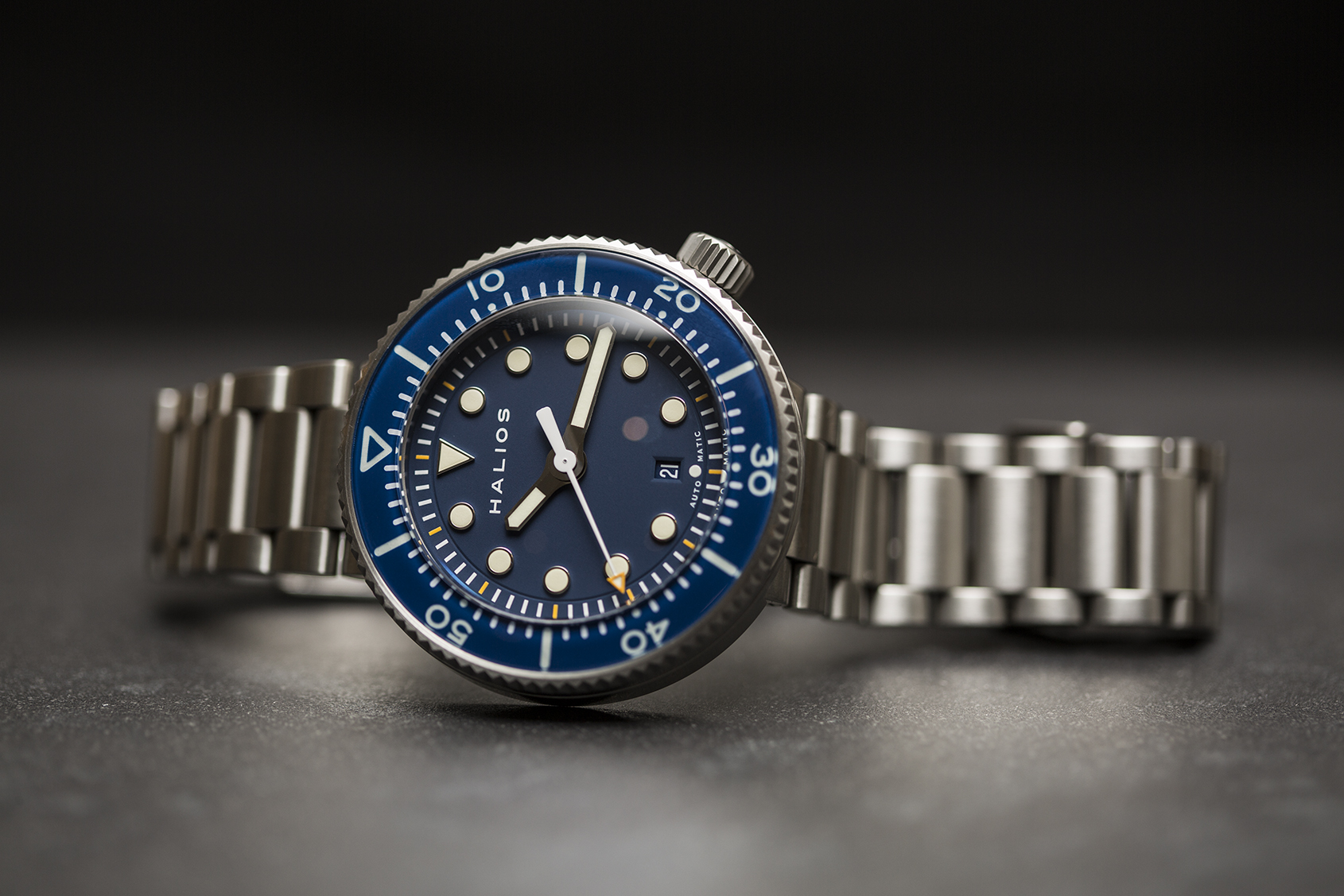 Over the years, I’ve worn many (many) watches for review purposes, and to be honest it’s rare that I’m still thinking about that watch months or years after the fact. The Puck, from Canadian microbrand Halios, is one of the rare exceptions. I wrote up the DLC version of the original Puck over on Hodinkee, way back in 2013 and it’s been stuck in my head ever since. So when I noticed some early renders of the Puck II on Instagram last year, I immediately contacted Jason Lim, founder of Halios, to get my hands on it ASAP (for purely impartial review purposes, obvs). Fast forward to a few weeks ago, and I was eagerly ripping open a DHL parcel to get my first look at the prototype. 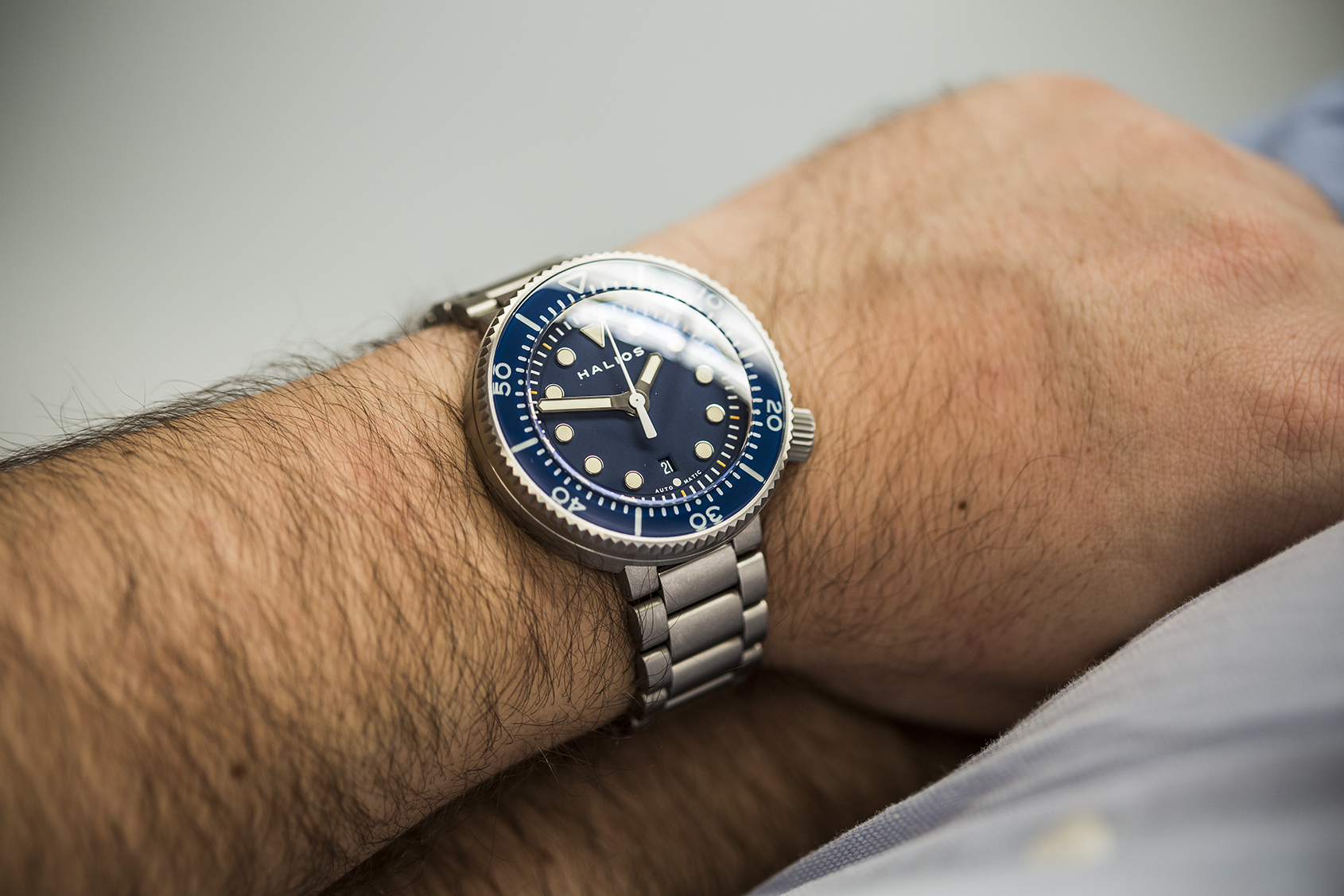 Halios made their name with the sort of unashamedly serious dive watch that guys on watch forums go nuts for – a beguiling combination of Spartan style, solid build and great value. The brutal Puck – named for its resemblance to a hockey puck – epitomised this approach. Polarising looks, an over-the-top 1000m depth rating and circa $1000 price tag ensured it was a runaway success, and expectations are high for version two. 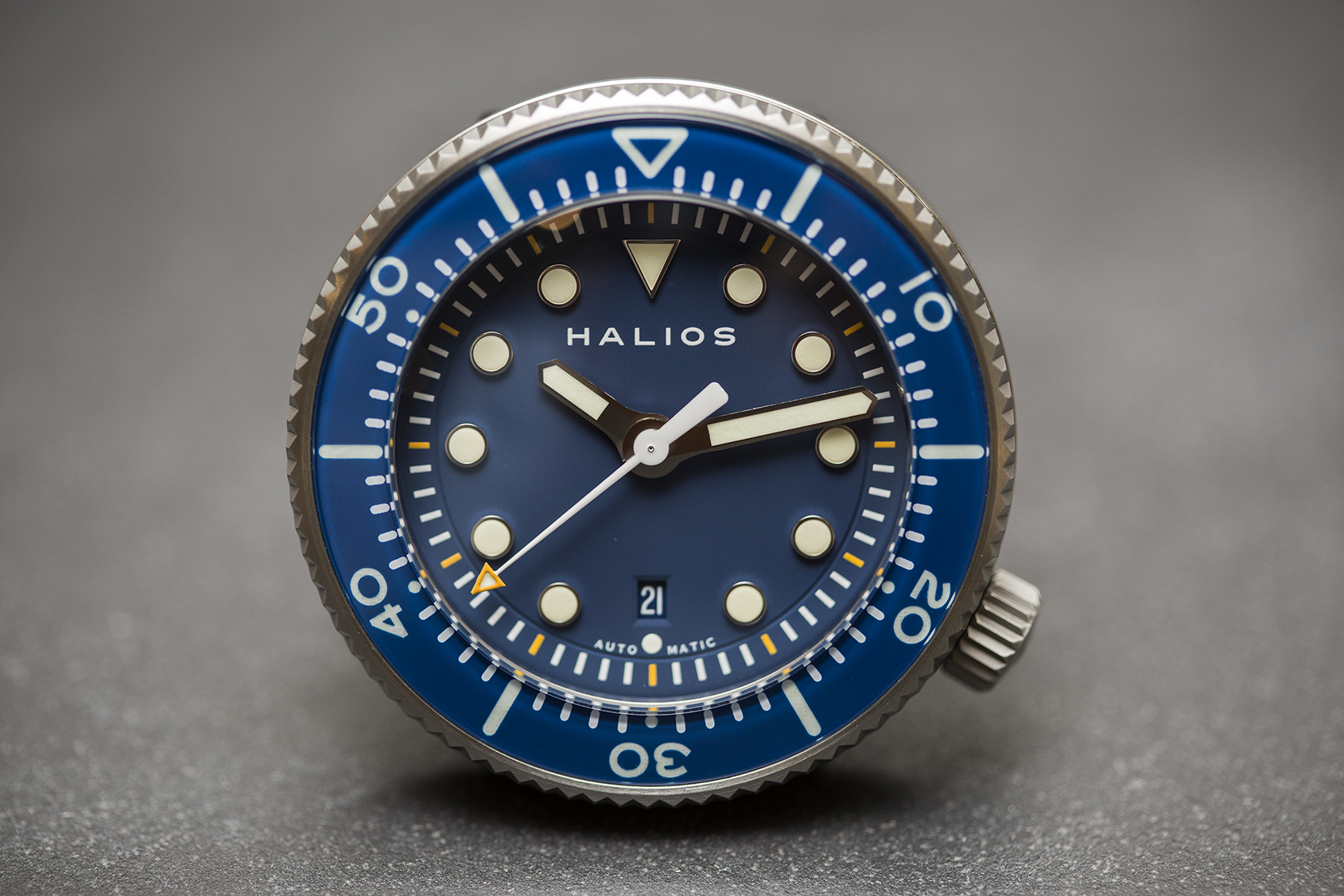 So, how does it compare? Some elements, like the monolithic 14mm high, 48mm wide case remain the same, but many things have been changed and improved. Water resistance is down to a (still OTT) 500m, and certain details of the 316L steel case have been streamlined. 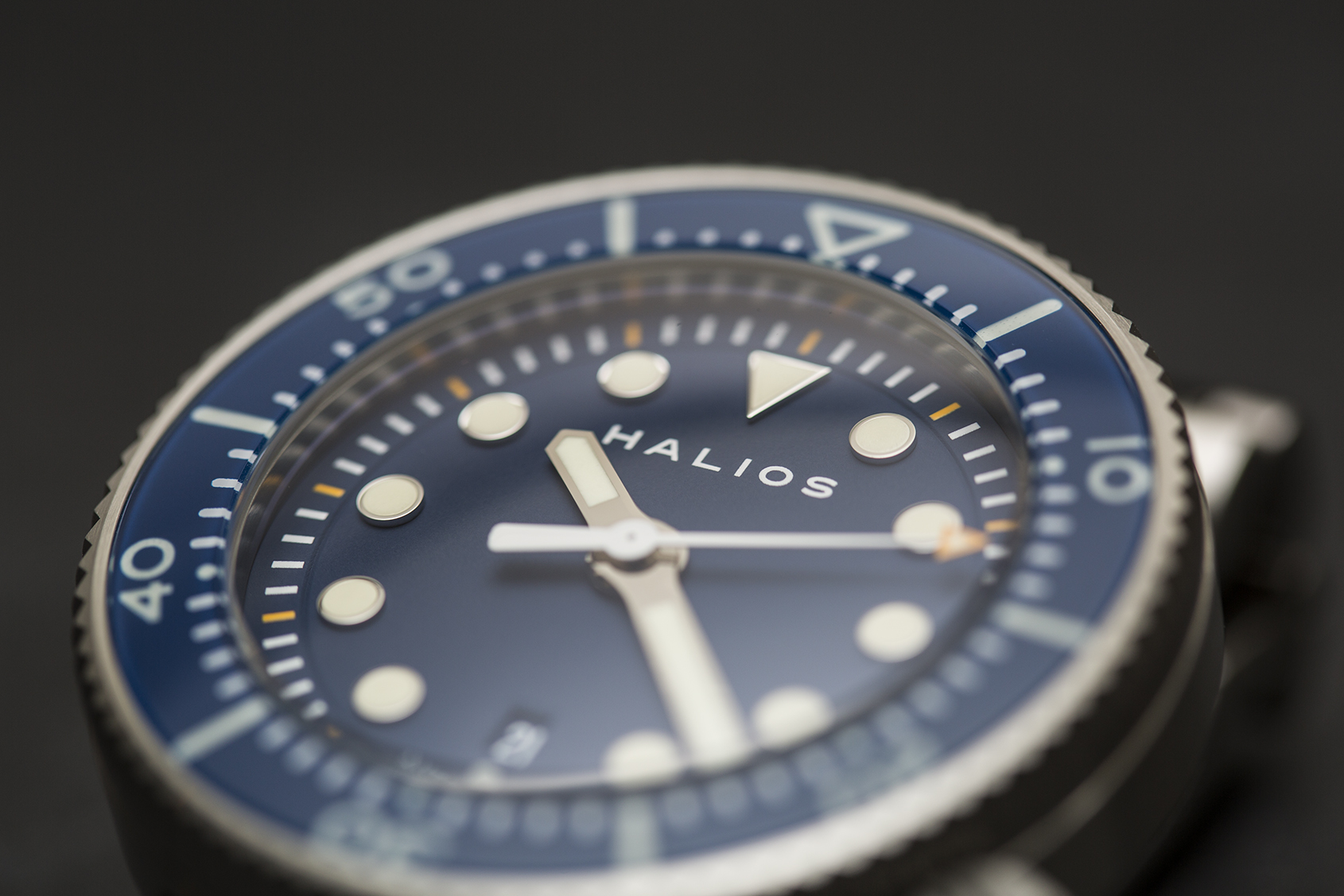 The bezel is no longer screwed, and it now features a sapphire overlay instead of aluminium. The dial markers are now polished roundels rather than plain batons, adding a touch of refinement. The lume is still superb. I also love the additional touches of colour, the orange five-minute markers and second hand tip definitely help to keep the summery blue dial interesting. The bezel action is smooth and firm, and the glossy sapphire inset adds to the overall impression that Halios has gone to some length to add a touch fancy to the functionality. Note that because this is a prototype, the shade of blue on the bezel is ever-so-slightly different to what will appear on the final version. 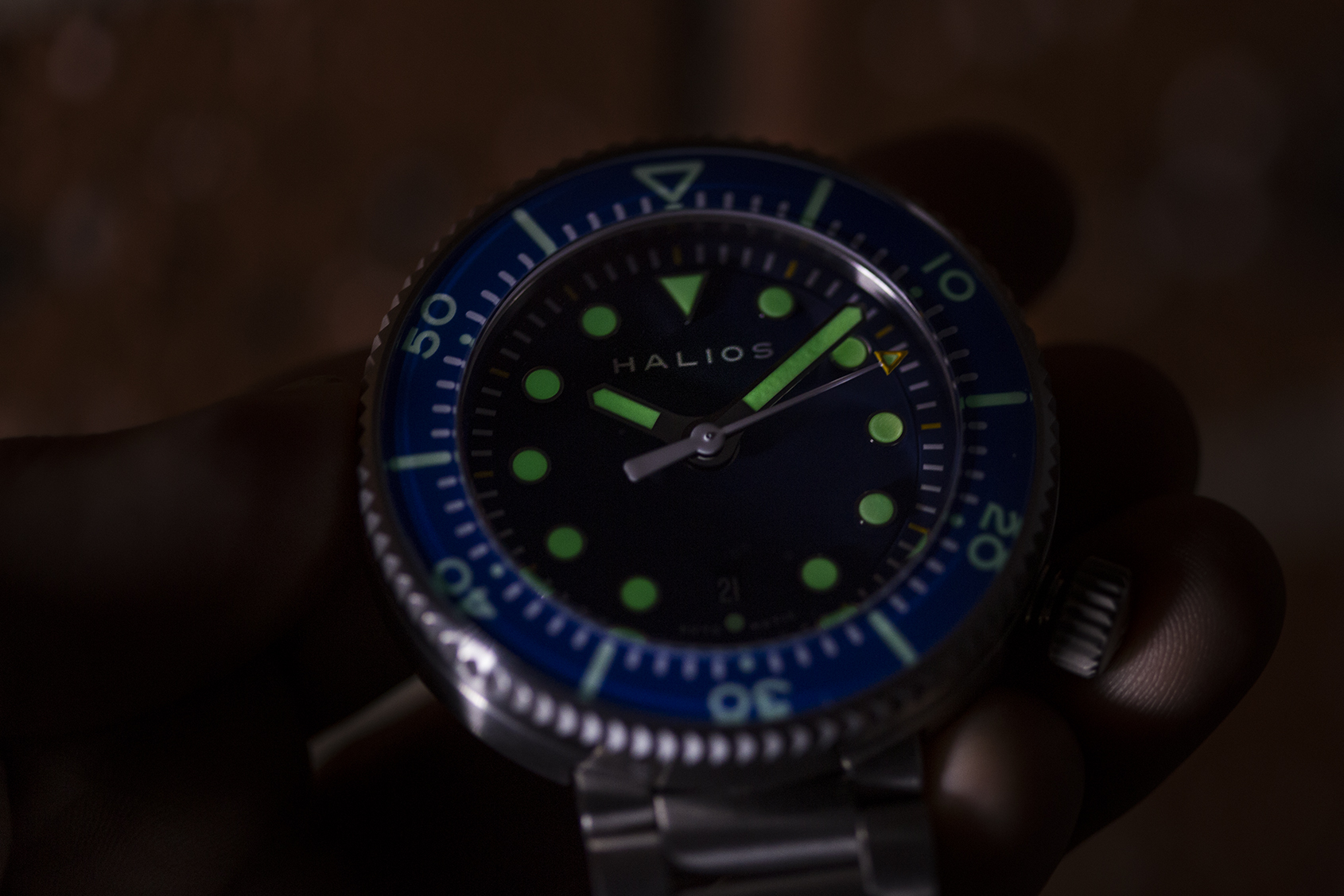 Overall, it’s still the same watch I fell in love with four years ago. The case is still gigantic, but because of the lugless design it actually wears quite comfortably, though I’m sure the design isn’t for everyone. The big bezel still looks like something out of James Bond, and the crisply defined teeth are a real pleasure to use. It ships on a suitably beefy steel bracelet. The design of the case means that you’re going to see wear on the links closest to the case, where they rub against the underside of the case. 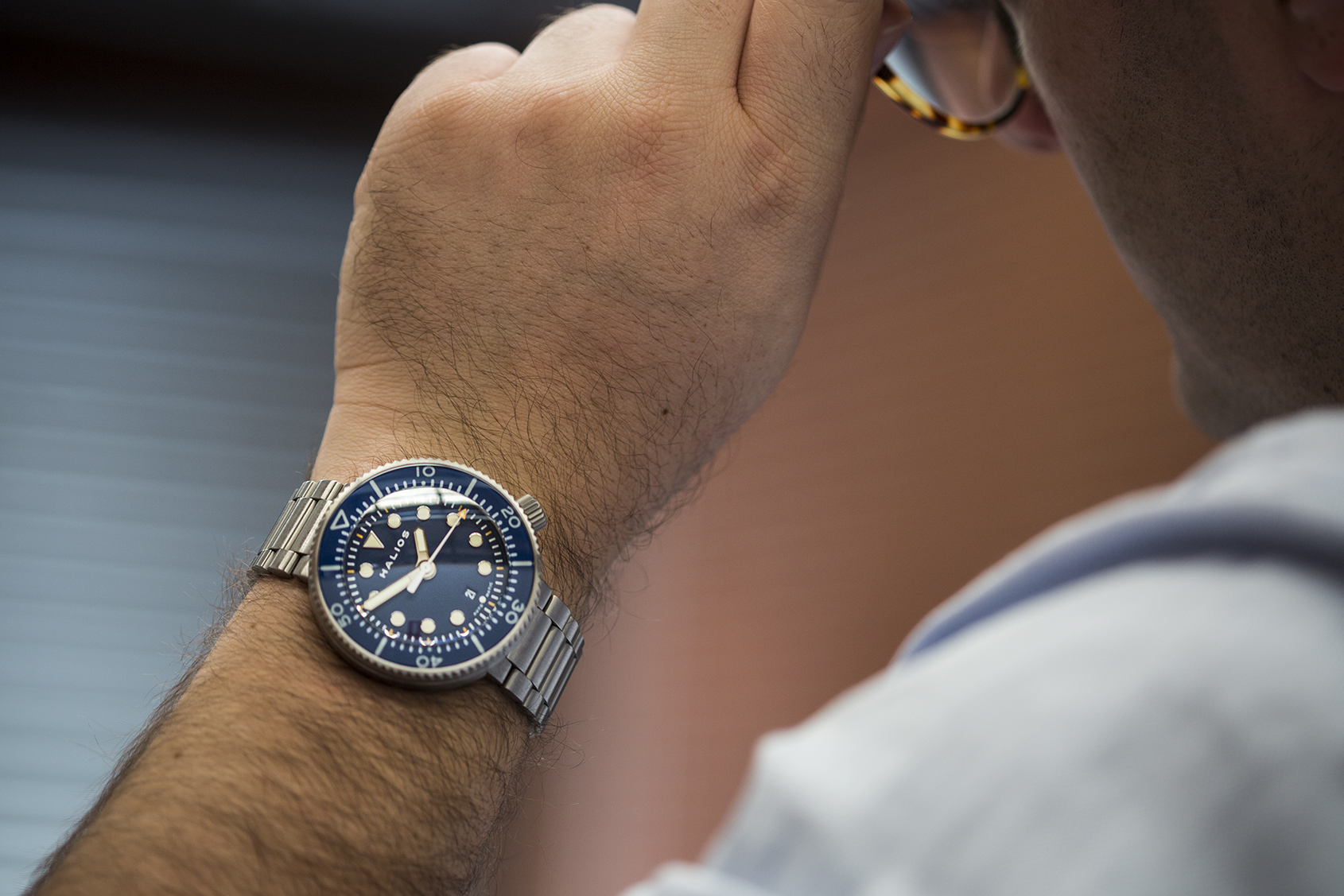 The unique case shape also means you might struggle to fit some straps on it. For my money, though, this watch would look perfect on a chunky shark mesh or an ISOfrane. The movement is now the Miyota 9015 – a perfectly fine performer, and I suspect I’m not alone in preferring to avoid the ETA premium. 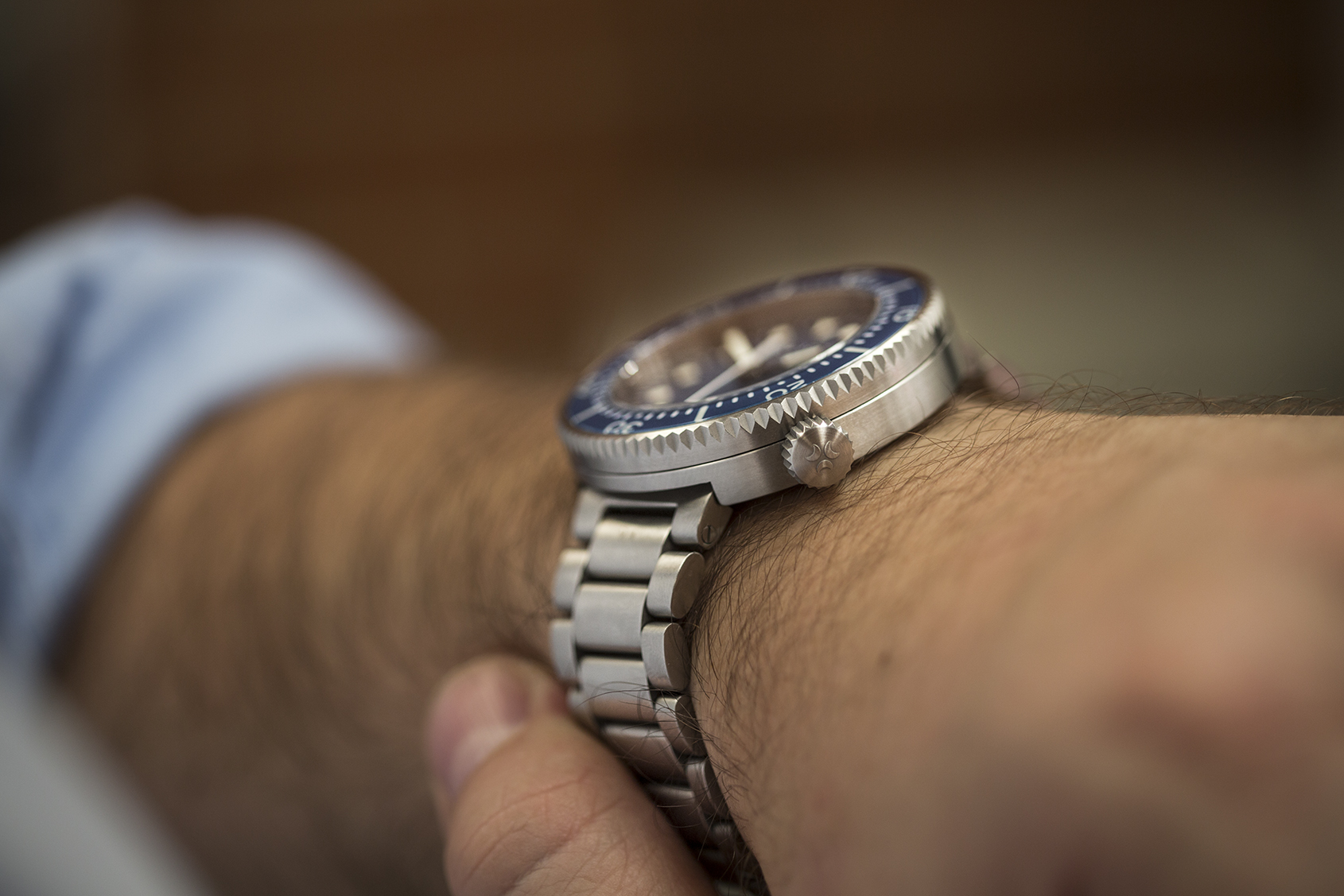 Halios continue to make truly great watches for a very reasonable price, and the Puck II is no exception. If I had to characterise the changes between this and the original, I’d say we’ve seen a slight concession to comfort and style here – a softening of the hardline utilitarian approach. And, given that my diving is purely of the desk variety, I’m entirely down with that.