Coming in hot like a Ki Blast, G-Shock is expanding its releases in collaboration with the internationally renowned Dragon Ball Z franchise across the globe. And this new GA110JDB is both the ultimate wristwear for Dragon Ball Z fans, and a watch that – in general – makes perfect sense in 2020, because it’s wild. 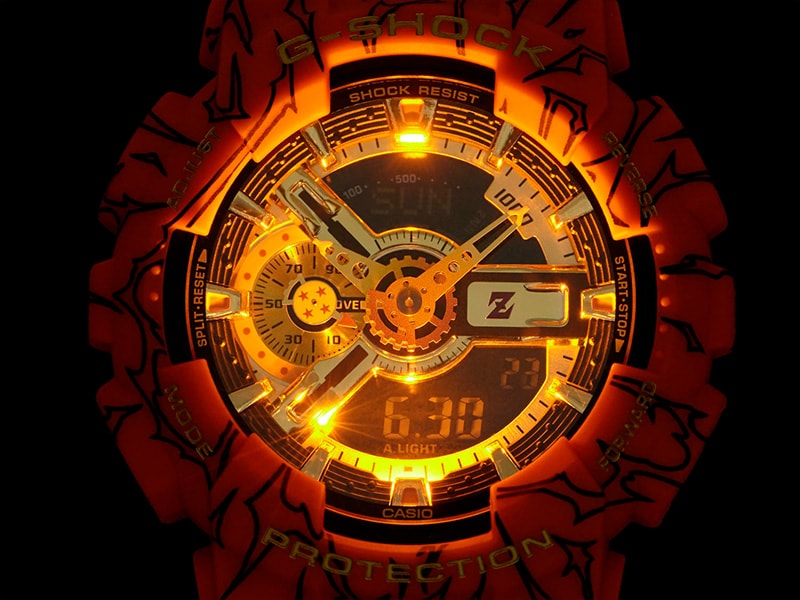 Your backlit watch can’t do this …

Like the standard production model, this watch is outfitted with a mineral crystal, a 200-metre water resistant case (with resistance to both magnetism and shocks), and CR1220 battery which should keep the watch running for 2 years. Its dimensions are ready for battle at 55.0mm x 51.2mm x 16.9 mm, and a weight of a mere 72g. 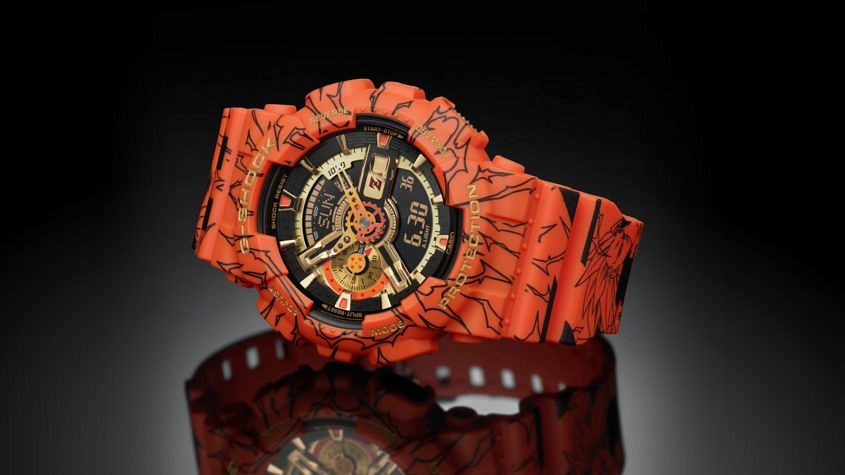 This watch, however, is quite special and distinct from others within the lineup. It is packed with subtle, and very unsubtle, nods to the Dragon Ball Z series on practically all of the components of the watch. The orange resin case and band are covered in Dragon Ball Z illustrations and graphic elements, depicting scenes of training and growth of the series protagonist Son Goku. The orange with black streaks resembles Son Goku’s wardrobe in combat and the way in which it creases during battle. It is also akin in look to the orange rocky terrain found within the franchise, supporting the G-Shock aim to be tough and rugged (like a boulder). 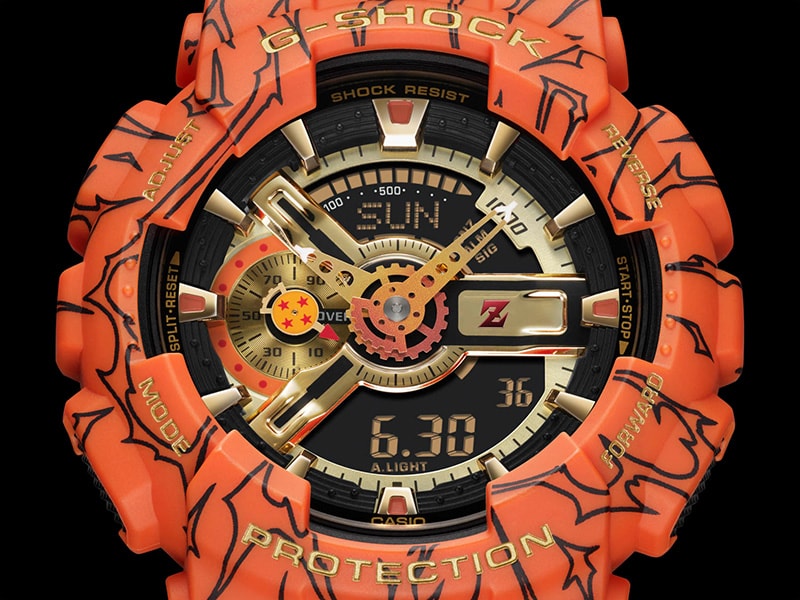 The dial and logo pop with gold accents, giving the look an extra punch. The gold tones tie in with the theme of the offering, representing the hue of the Dragon Balls centric to the series. The sub-dial at the 9 o’clock position displays a four-star ball motif. This particular Dragon Ball symbolises one of the seven Dragon Balls most closely associated with Son Goku. Surrounding the sub-dial, note the six other stars symbolising the other six Dragon Balls found within the series universe. It’s not just there to look cool, the design is incorporated in the reference’s speedometer function, which is incredibly versatile for calculating speed. Instead of having a fixed tachymeter, one can quickly set a distance ranging from 0.0 to 99km. Once your distance is set, through the start/stop of the stopwatch one can easily calculate the speed of moving objects, whether fists of fury or a supercar on the racetrack. 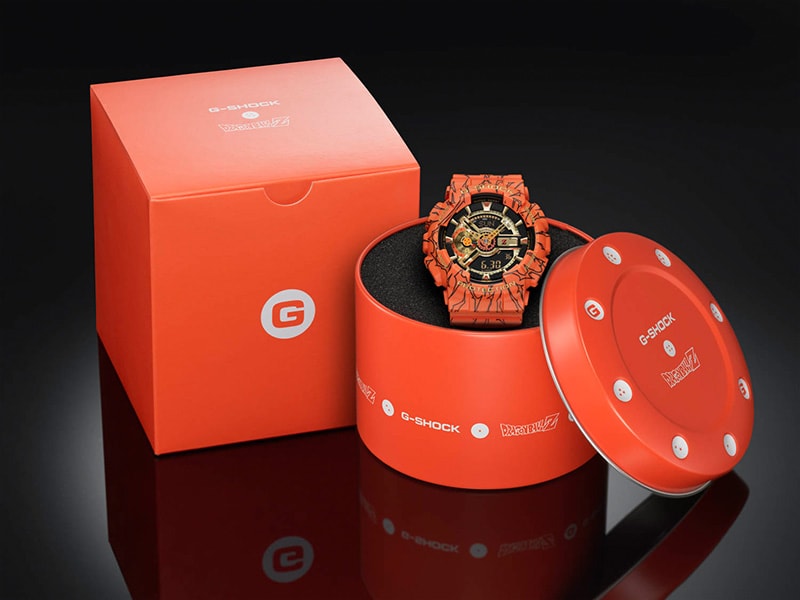 G-Shock save the best of the Dragon Ball Z touches for the dark, with one of the coolest backlit aesthetics I have ever seen in a watch. The watch illuminates the power of the Dragon Ball and looks as if Son Goku is about to unleash his finishing move. If there was any doubt what the watch is in reference to, at the 3 o’clock position one will see the signature “Z” motif found throughout the franchise. The Dragon Ball Z logo can also be found on the caseback and even on the specially designed box and packaging sure to please fans of the series and those who appreciate thoughtful package design. 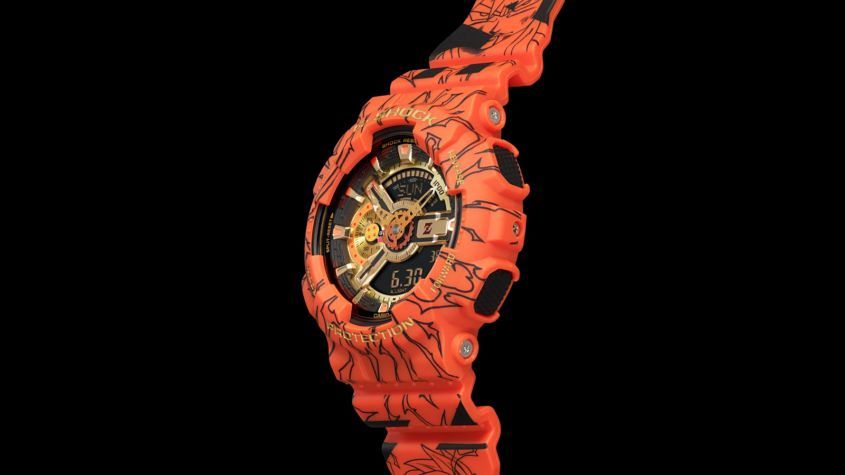 The watch is available for pre-order now with shipments beginning late August. With an RRP of $250 USD / (circa $360 AUD) this may be the bright blast for your wrist you need in an otherwise dark 2020 … just Saiyan. 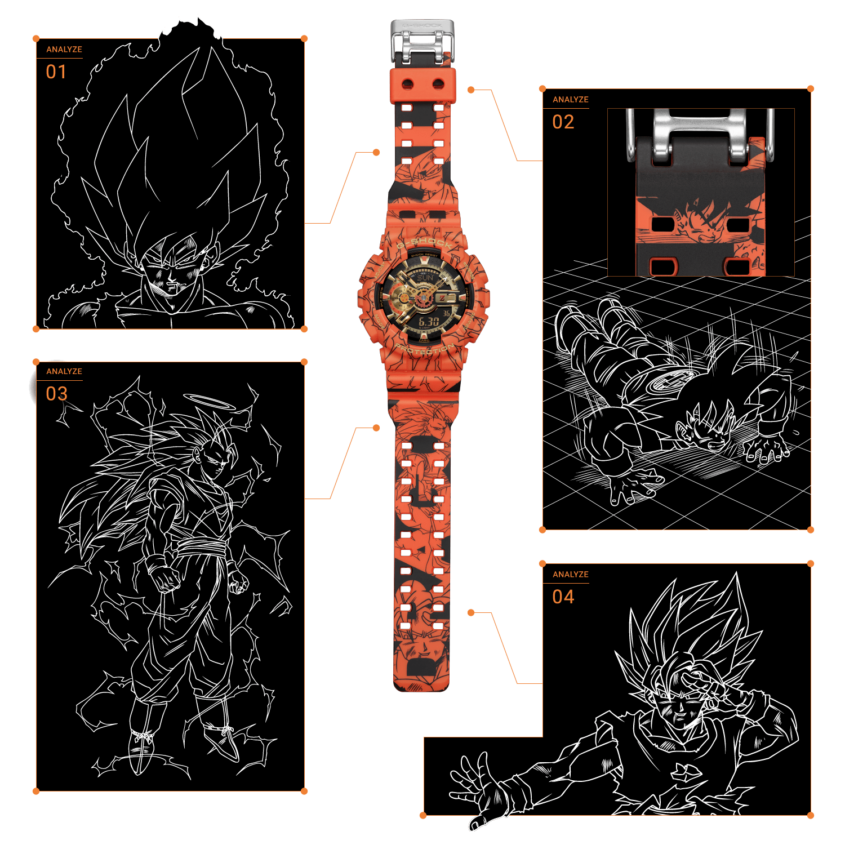 The aesthetics of the GA110JDB-1A4 unpacked