Welcome to the Friday Wind Down. Let’s dig into some of the horological headlines of the week! 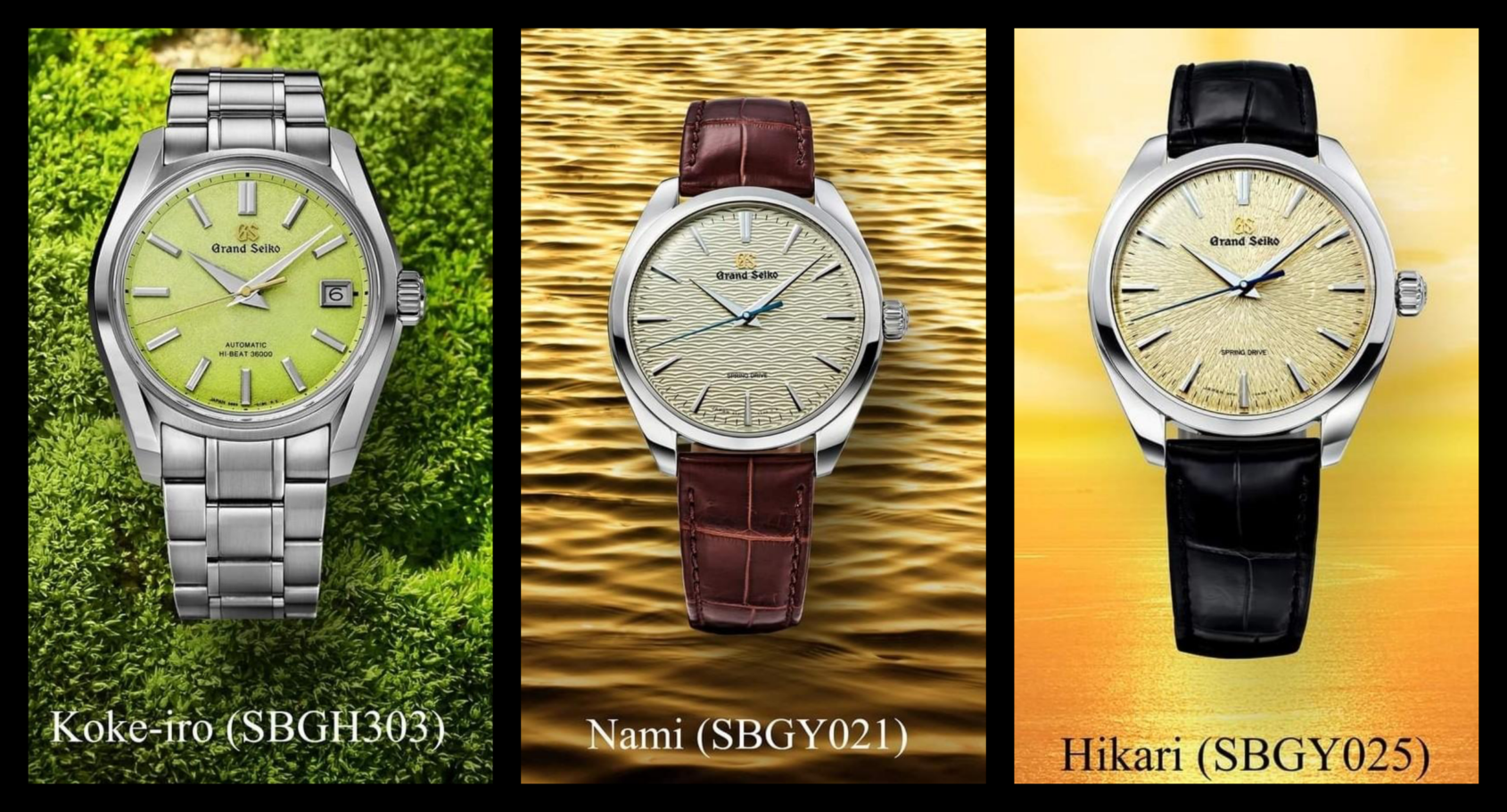 Grand Seiko regional limited editions cause some of the greatest amount of FOMO in the collecting community, often producing really striking and distinct creations that people want but, due to the region they live in, cannot buy. The latest trio has Grand Seiko fans outside of Thailand crying, with the new region-limited Koke-iro (SBGH303), Nami (SBGY021), and Hikari (SBGY05) watches. The 62GS-cased high-beat is catching attention for its pistachio-green like Kira-zuri dial, and the two manually wound Spring Drive references sport sandy golden-hued dials with textures I personally have never seen from the brand before (although their true natural muses can be spotted behind their renders). Excuse me while I go cry. 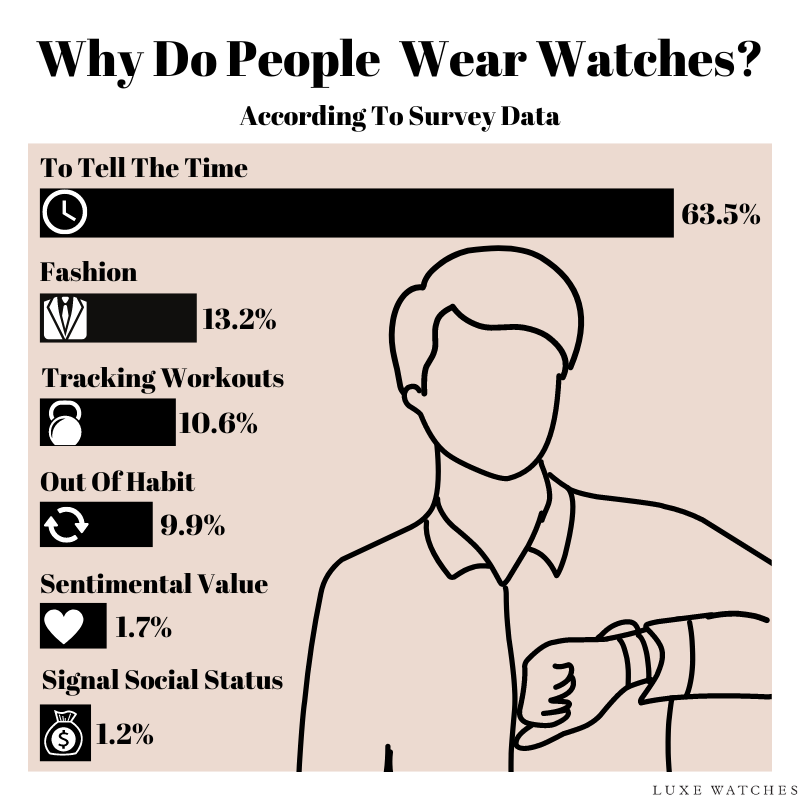 WatchPro USA shared the results of a survey this week, conducted by British pre-owned watch specialist Luxe Wear. The data, based on the 1000 randomly selected respondents, revealed that 63.5% of people wear watches to tell the time. I know that seems a bit captain obvious, but what surprised me was the fact only 10.6% people chose the response “tracking workouts” (surprising given the ubiquity of Apple Watches) and that only 1.2% chose “signal social status”. I guess the latter is not a surprise per se, as most people wouldn’t admit they were clout-chasers. But we have seen from the secondary market just how badly people want, and how much they will pay over retail, to wear particular models or brands. I think it would be really neat for, say the New York Times, to run a similar survey, as the results may have more integrity if the survey was helmed by an organisation unrelated to watches. 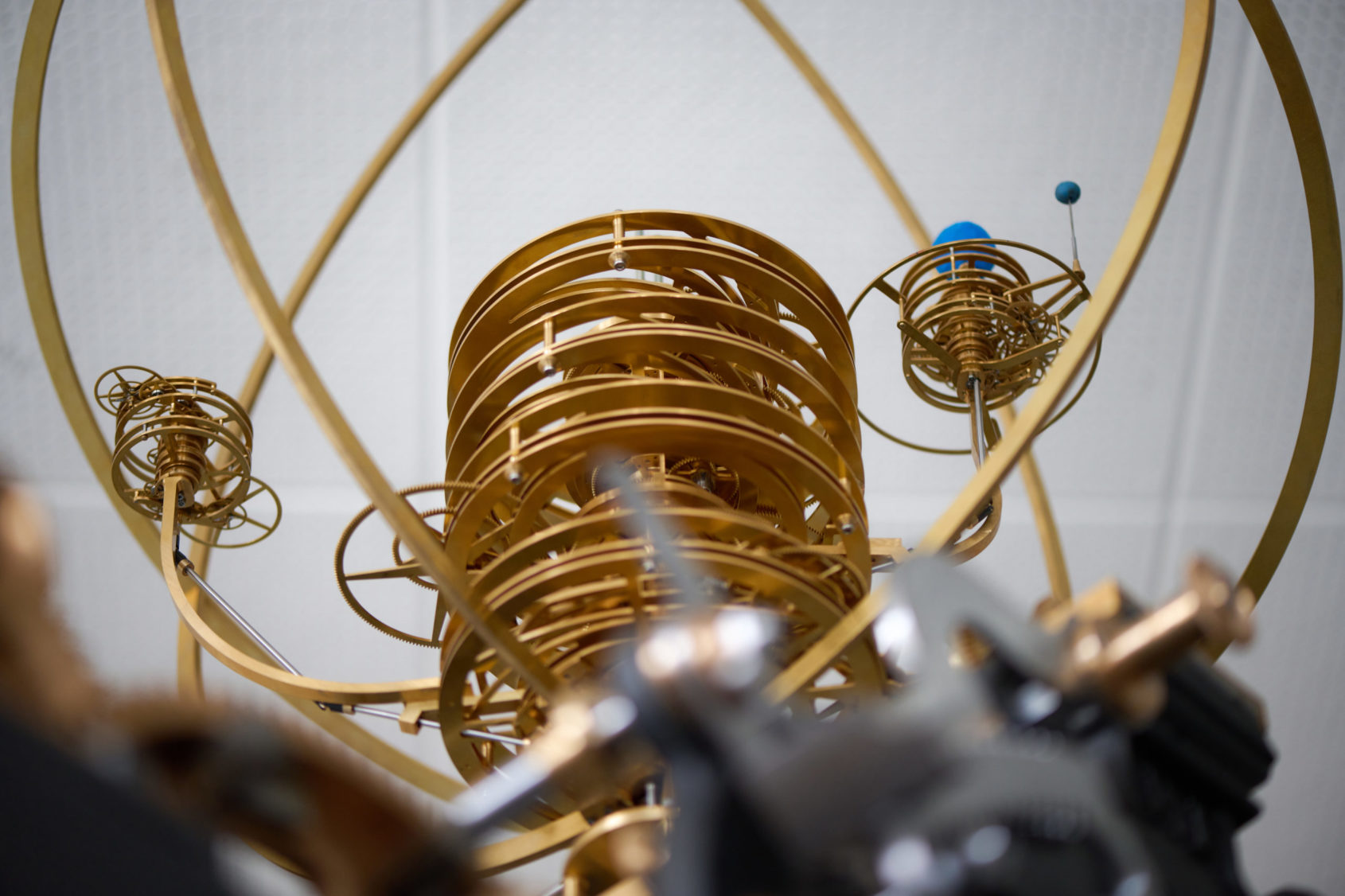 If you are like me, any time that watches and TV come together is a huge win. While not broadcasted on network or platform television, DeBethune has teamed up with director Olivier Ronot to create an episodic series that delves into the highly intricate Mecavers project helmed by Master Watchmaker and co-founder of De Bethune Denis Flageollet.

DeBethune explains: “This is the story of the creation of the ultimate timepiece… One that will retrace through its myriad gears the history of time, the universal history of the earthly and celestial mechanics of matter.” Episode 1 of the series is available to watch here.

Hope you all have a wonderful weekend,

The header is misleading, as Adrian Barker has nothing to do with this meme – at least not directly. The meme is yet another play on watch speak, and a hilarious reminder that not everything is about watches as much as we all may be obsessed.

Wrist shot of the week: Doesn’t this make you want a Coke?

There is a clear mismatch between the beverage and bezel, but doesn’t this fantastic wrist shot make you wonder whether or not it is time for Rolex to make a ceramic Coke (red/black) bezelled GMT Master II? In an exciting new chapter of its story, Tissot introduces new models to its PRX line-up. Tissot welcomes two new 40mm versions to its PRX Automatic line-up, both featuring satin-finished steel cases and 18K solid rose gold fluted bezels. The pair will be powered by the high-performance Powermatic 80 movement, which combines an anti-magnetic Nivachron™ hairspring with an 80-hour power reserve. Available in a brown or blue dial, both with a satin sunray finish.

Our favourite Time+Tide coverage of the week:

Bulgari’s Octo Finissimo tends to steal the limelight a fair bit, seemingly making headlines whenever a new version is released. The Octo Roma may not garner the same amount of attention or record-breaking mentions, but it’s an equally important range for those who may prefer a slightly more restrained design language and something with a bit more weight to it. The Bulgari Octo Roma WorldTimer in black DLC offers a versatile travelling companion with swathes of Italian coolness.. Watch the full hands-on video review above.

HANDS-ON: The Bulova Classic HACK Military is a handsome field watch for under $500 USD 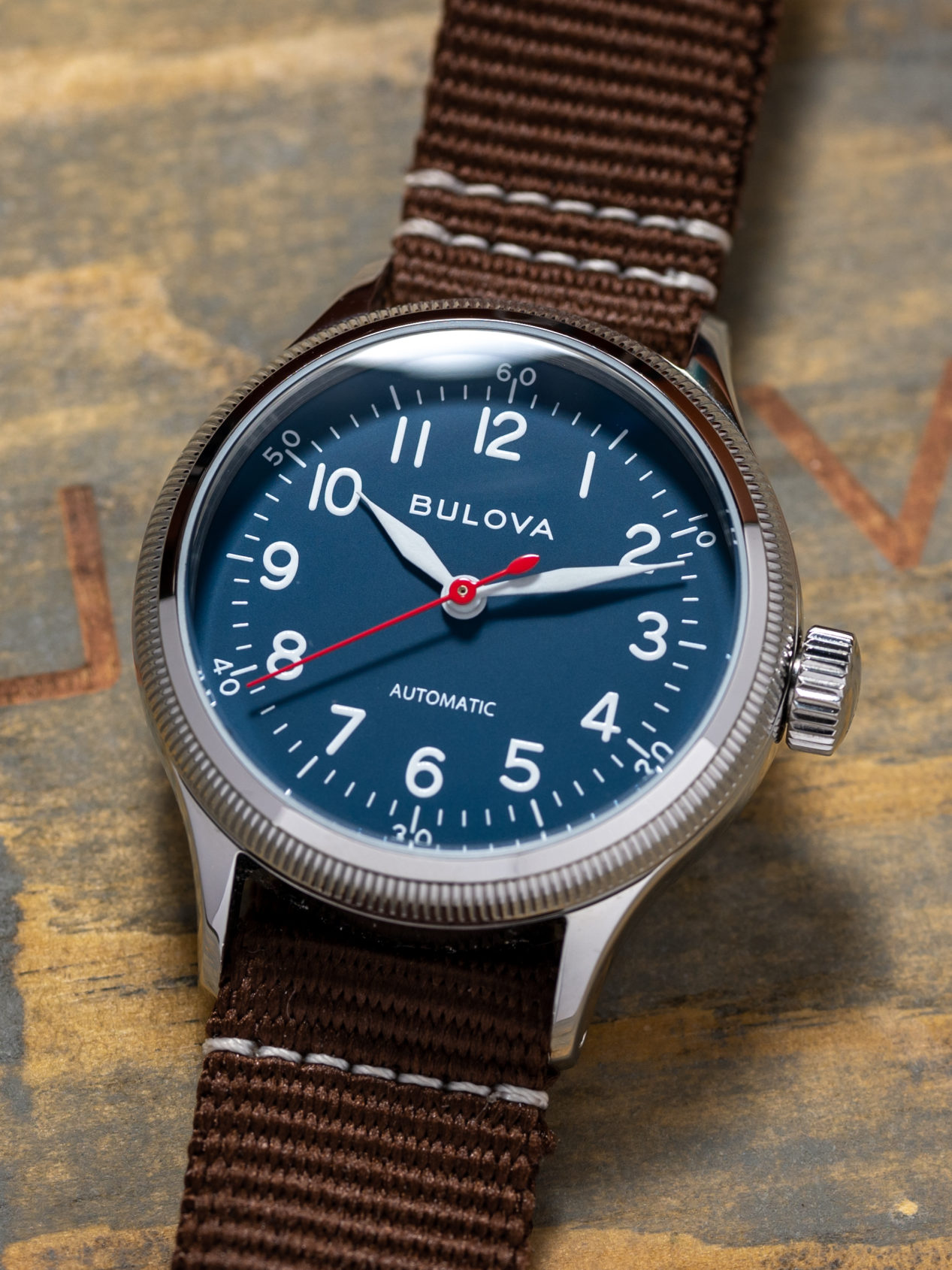 The Bulova HACK honours the Bulova watches that were issued to American troops in WWII with their simplistic black and white dials. But the latest addition to the collection goes in a slightly more modern direction without sacrificing the heritage of its Bulova A-11 inspiration. Read the full hands-on review here.

Hayek: “There could be another collaboration”. Which brand will get the MoonSwatch treatment next? 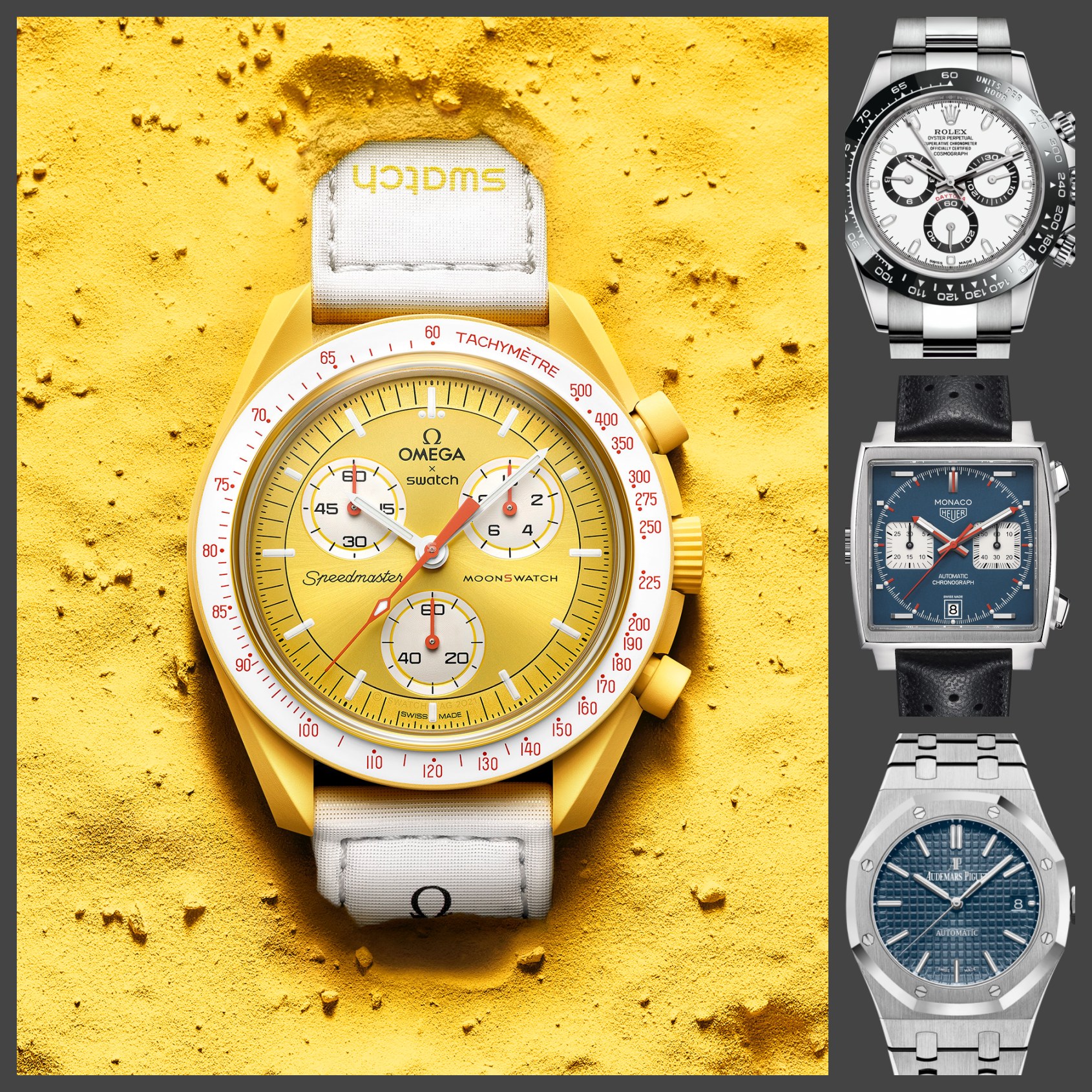 A few weeks ago, Tim Barber wrote a great story for Wired about the evolution of the MoonSwatch, the wildly successful collaboration between Swatch and Omega. But one comment in there really caught my eye. Interviewing the Swatch Group’s CEO Nicholas Hayek at the HQ in Biel, Barber was shown early prototypes for potential Bioceramic collaborations before the MoonSwatch was conceptualised. These included a Bioceramic version of Blancpain’s iconic dive watch, the Fifty Fathoms, and the Omega Seamaster 300m. Hayek also refused to rule out the possibility of further brand collaborations. You can read the full story here. 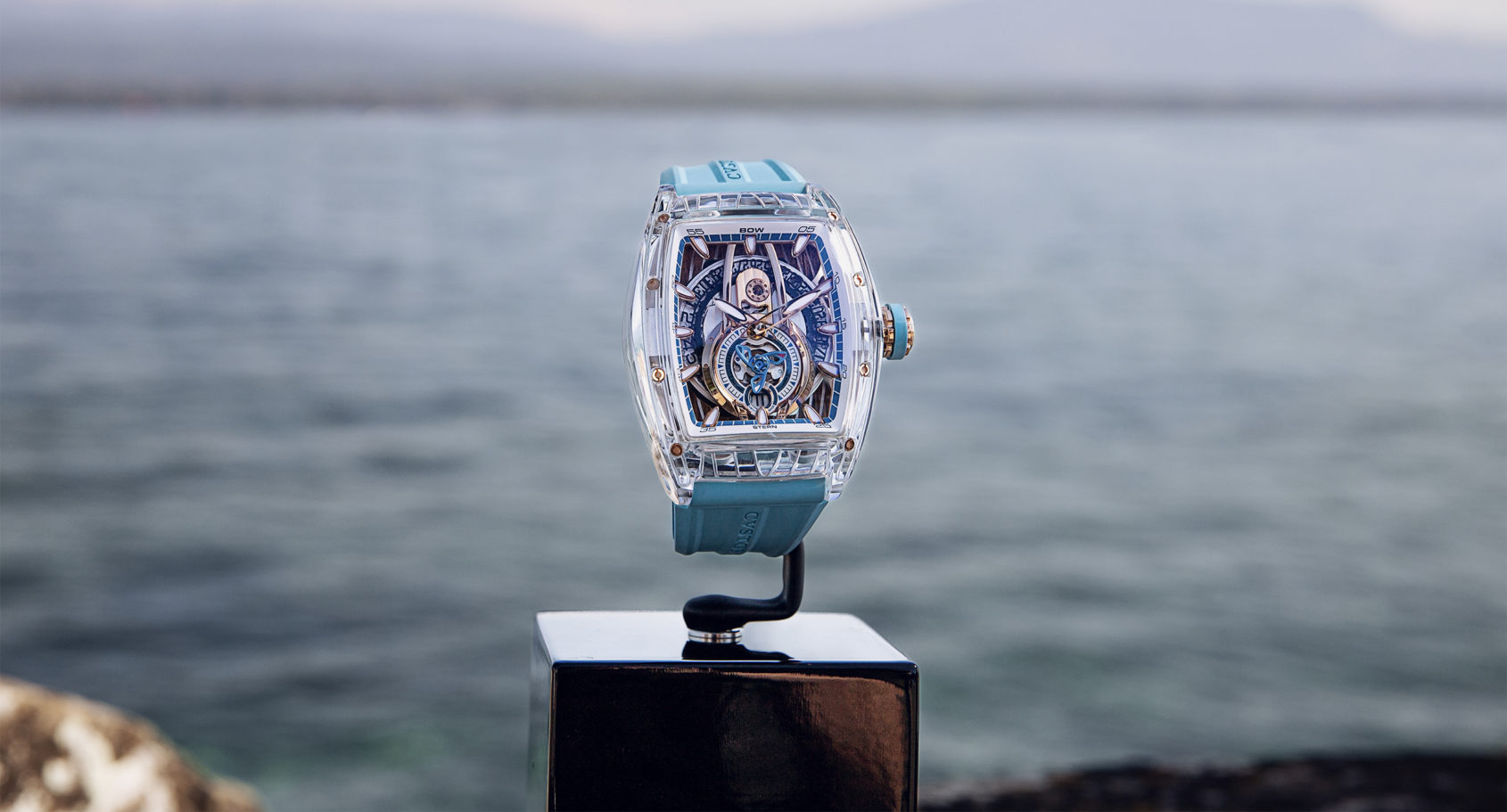 Although the vast majority of dive-watch owners never venture deeper than a couple of metres below sea level, we can all understand the appeal behind the ruggedness, history and utility of the category. Yachting watches on the other hand are such a quaint niche that it’s hard to imagine why almost every major brand has at least one watch dedicated to it, from incredibly complex chronographs to time-only displays of precious metal. For the independent brand CVSTOS, the focus is honed in on the luxury element behind the oceanic lifestyle, with the CVSTOS Sealiner PS presenting like a yacht on the wrist. Read Fergus’ full review here.