If you ask any watch enthusiast what the most influential watch partnership ever is, without hesitation they will answer Omega and James Bond. Jean-Claude Biver’s innovative thinking made Omega the household name it is today, associating the brand with the suave operative and all of his adventures. The James Bond saga of films is beloved worldwide, and this year marks the 60th anniversary of the character’s debut on screen. Of course Omega wants to celebrate this anniversary and partnership the best way they know how, with a new stainless steel Omega Seamaster 300M 60 Years of James Bond Edition. 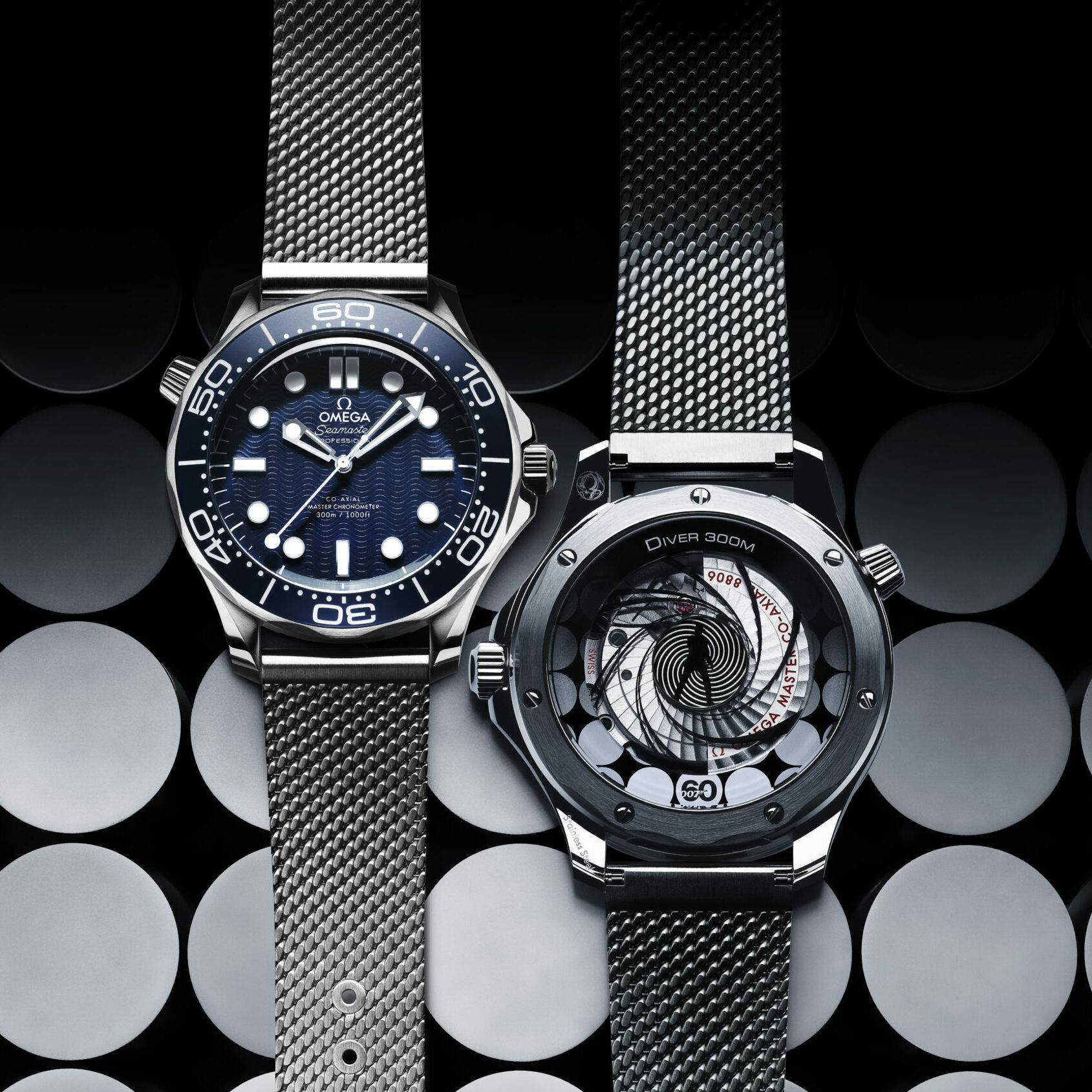 Considering just how familiar most of us are with the Seamaster 300M, I do not want to waste your time with a standard review of the piece. Instead, I would rather do you the service of pointing out what you really need to know – what is actually new and important about this release.

Poetically, the design of the new Omega Seamaster 300M 60 Years of James Bond Edition blends the first Omega Seamaster design for James Bond that debuted in GoldenEye with the latest design seen in No Time to Die which closed out Daniel Craig’s tenure as bond. The usage of an aluminium bezel, instead of a ceramic bezel, is a nod to both the No Time to Die and GoldenEye Seamaster watches. The timing scale font is what we have seen on the latest references, including the NTTD, but its blue shade mimics the blue aluminium bezel found on the GoldenEye model from 1995.

Omega has paired their modern indices and handset with a dial that shares the same color and material as the bezel – blue oxalic anodized aluminium – a nod to the original GoldenEye Seamaster. The wave pattern is laser engraved in a manner that gives it a look, depth, and texture more in line with the GoldenEye model as well. The mesh bracelet, however, is a total nod to the NTTD and is the first time it has been produced in steel. Some buyers may harp on the clasp’s bulk, but it is known for being a very secure clasp and the mesh bracelet style is very comfortable on the wrist. Hopefully, like the titanium one found on the NTTD, Omega will make a small size of the bracelet as well to ensure all can find their optimal fit. One quick final note for dial purists, there is no date complication, like the NTTD, so the Omega Seamaster 300M 60 Years of James Bond Edition definitely has a super clean dial visual. 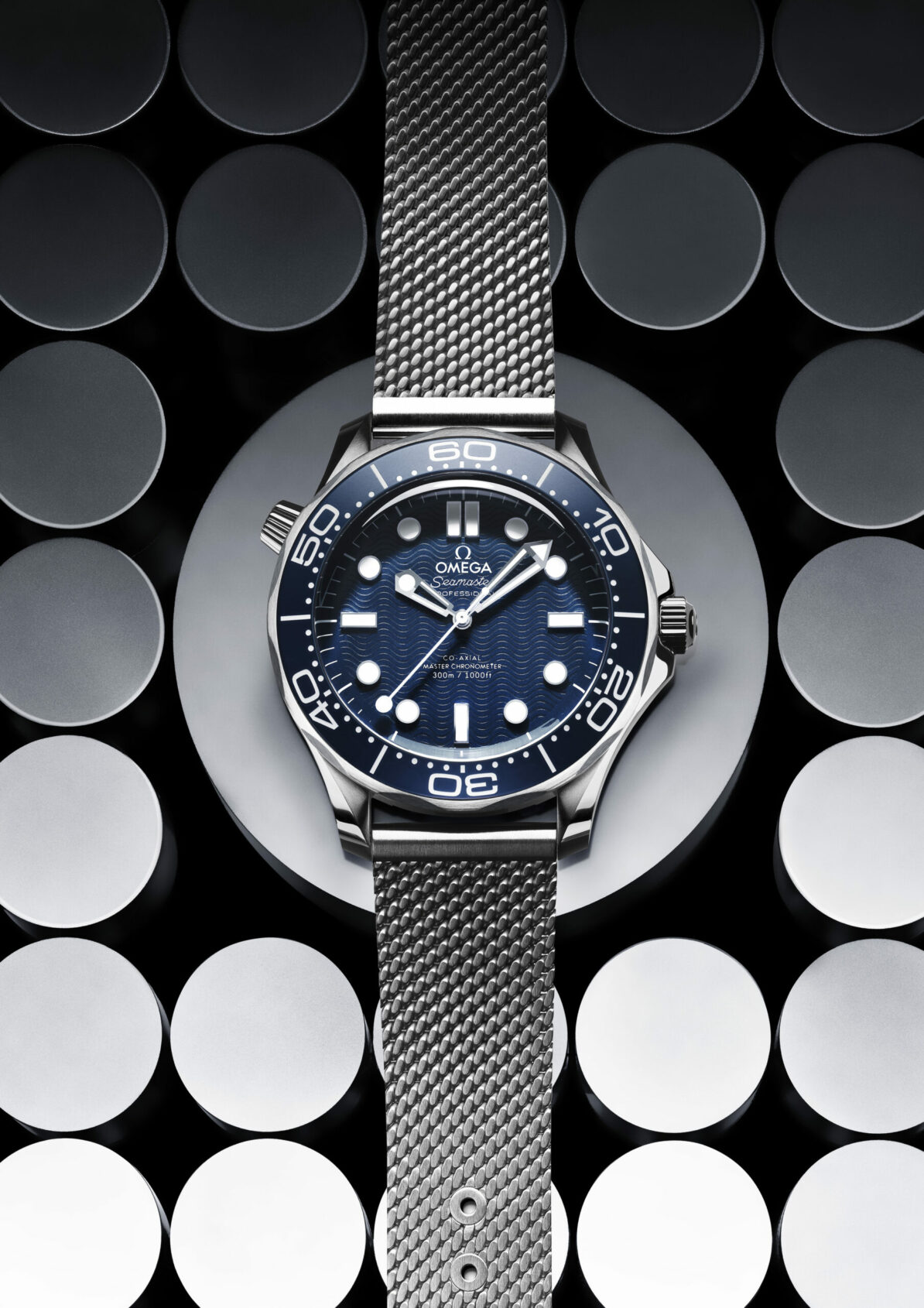 One gripe with past Bond editions was the overt 007 branding. In line with the NTTD model, looking at the front of the watch there are no major tells this is a Bond Edition. Only those familiar with the familiar with the Seamaster lineage, specifically models that appeared in 007 films, would catch the dial nod to the original GoldenEye. But, there is one sublte tell this is a Bond anniversary model. The bezel’s timing scale, which usually includes a triangle and pip, instead features the numeral 60 at the top. This is a nod to the 60th anniversary Bond and Omega are celebrating.

The case is a tad thicker 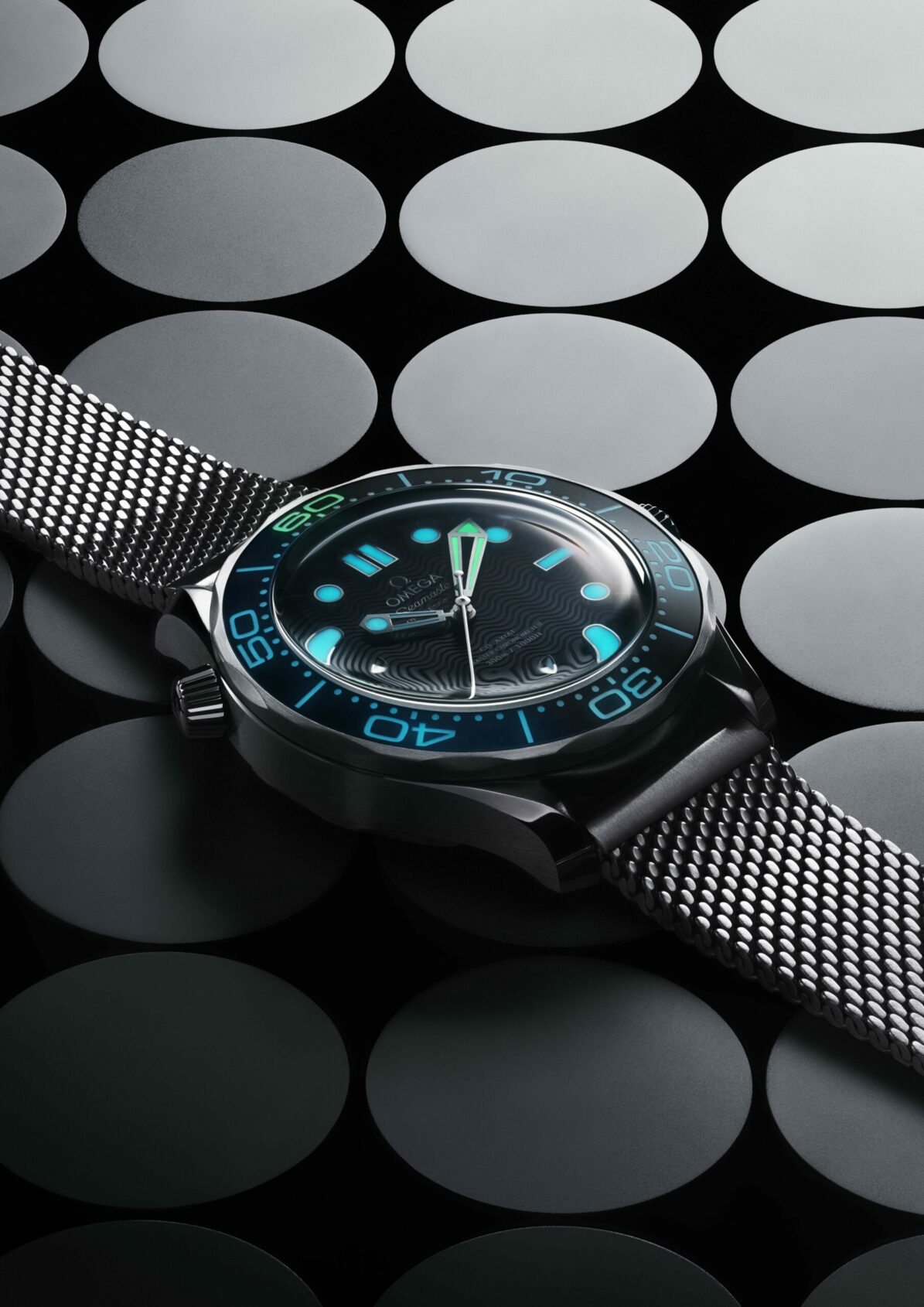 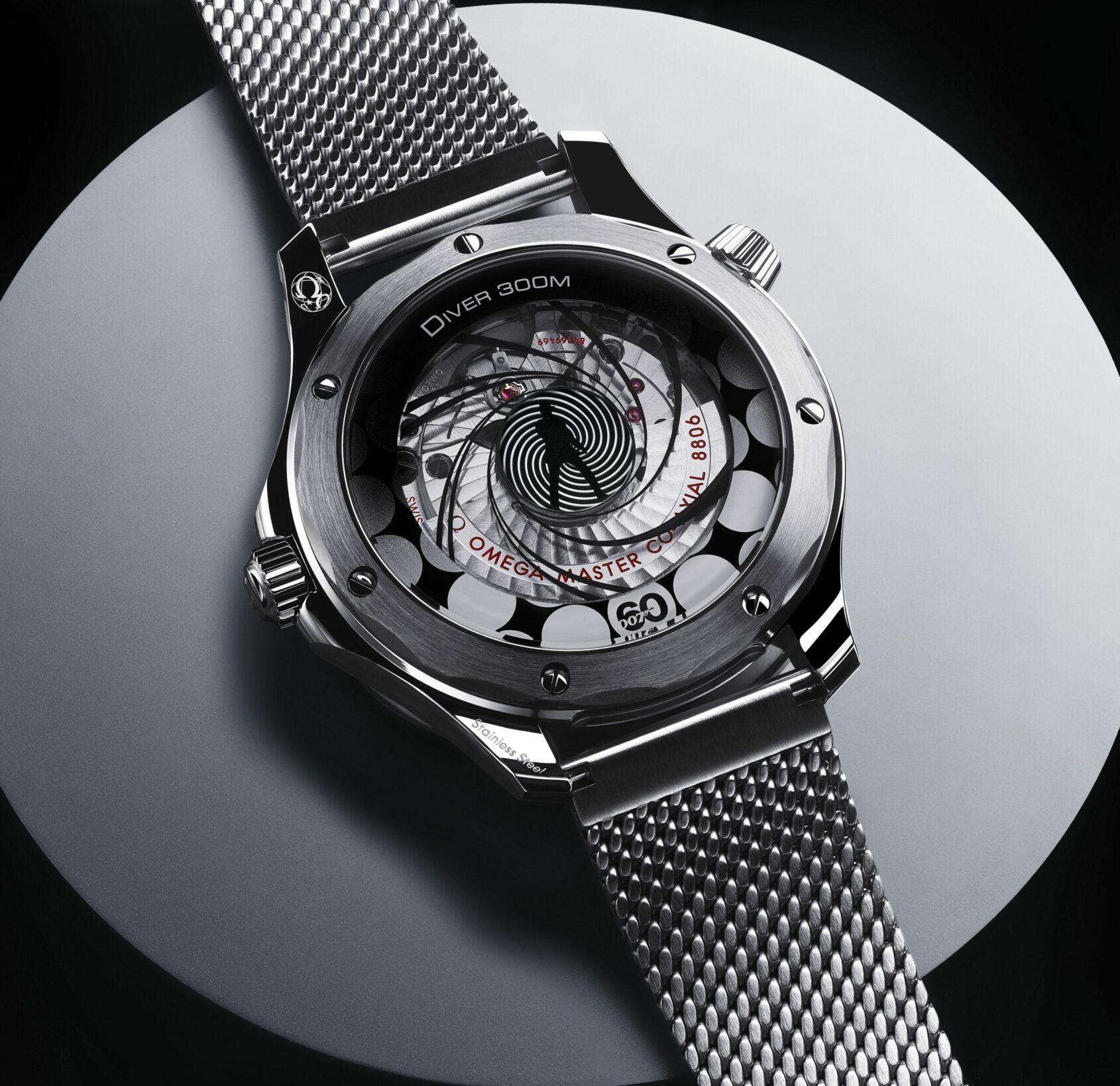 If Star Wars’ signature opening is the large yellow text crawl, for the Bond films it is the opening sequence with Bond in silhouette and a spinning gun barrel design. Omega has captured this iconic opener with a new patent pending moiré animation caseback. Omega explains: “This dynamic scene plays out beneath the sapphire, decorated with micro-structured metallisation. The patent pending ‘moiré’ effect animation is linked to the running of the lollipop central seconds hand, so the action never stops.” And, for those wondering, this animation does not effect the power reserve of the 8806 calibre within. By adjusting the weight of the central seconds hand, the power reserve remains at 55 hours like other models using the calibre.

Just look at that caseback in action!

It is very well priced within the catalogue 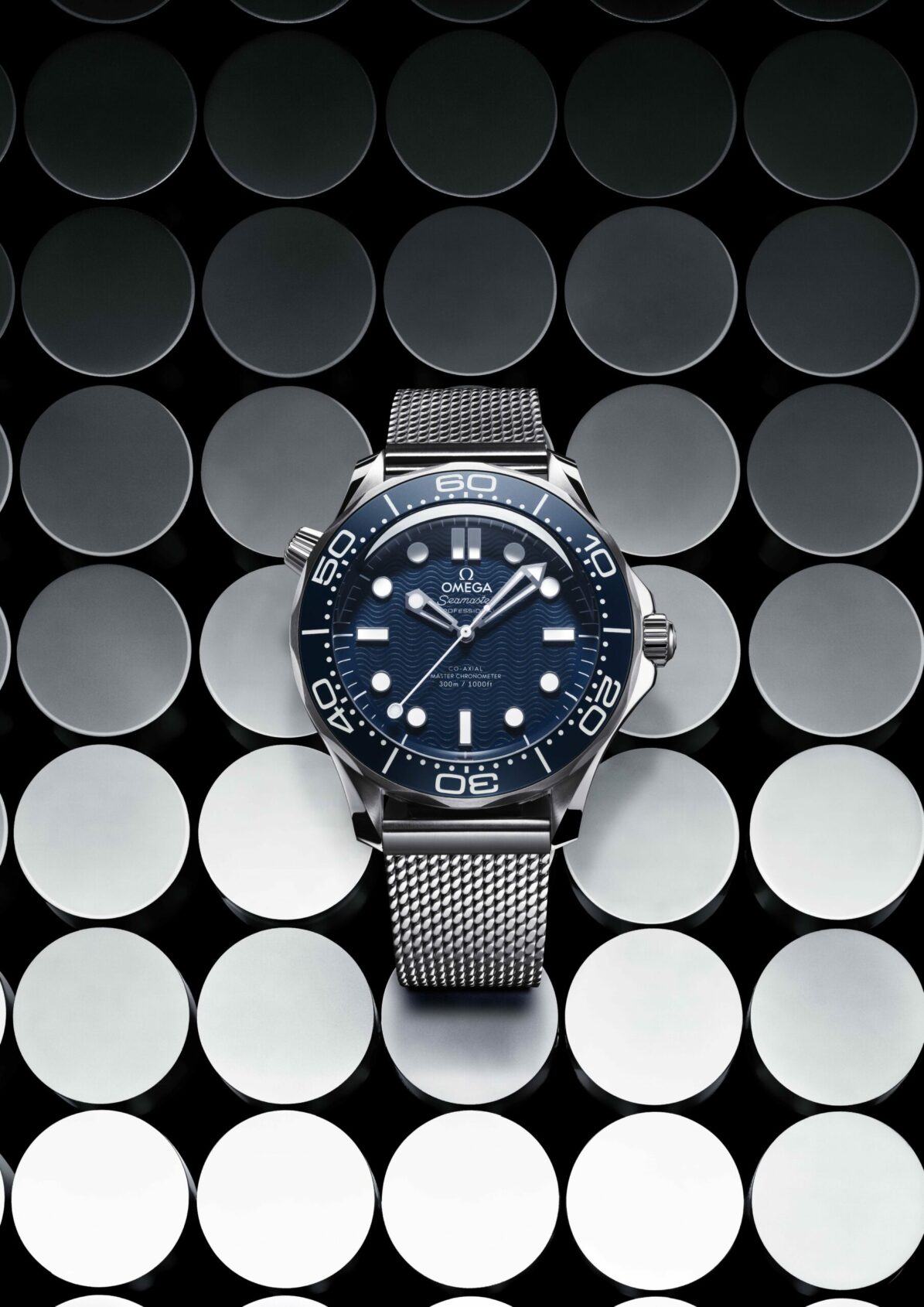 While the design, visual, and specs, are the first factors to spark intrigue of purchase intent, pricing is the ultimate factor at the end of the day. With a retail price of CHF 7,000, CHF 2,000 more than a standard model and CHF 1,500 CHF less than the NTTD, I feel that Omega, in their pricing, has done a great job of acknowledging the special nature of the piece while being extremely fair as well. And, whether or not the rumors are true that this watch may, in fact, appear in the next Bond film, I suspect many will be lining up to purchase this cool commemorative Seamaster. 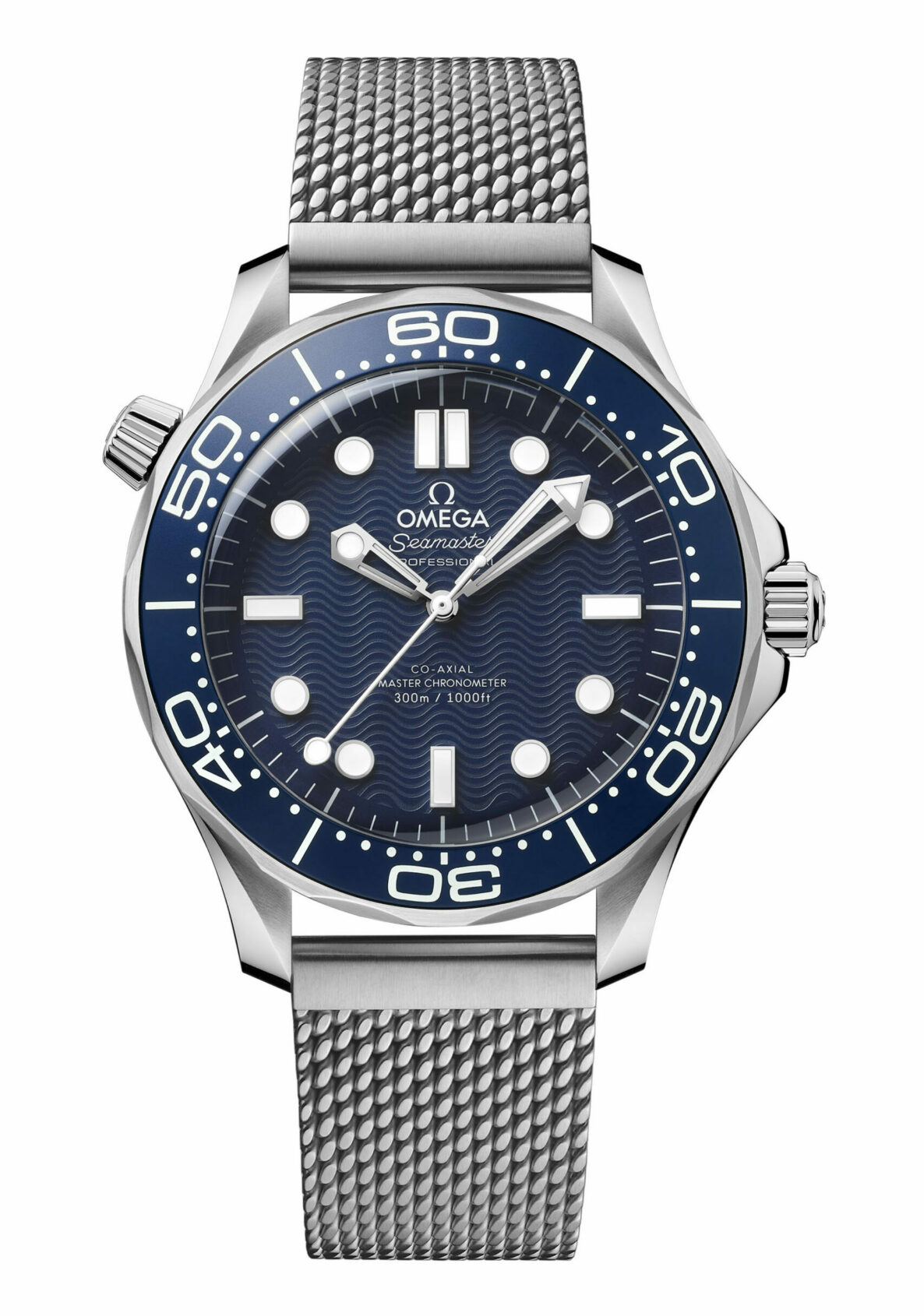 The Omega Seamaster 300M 60 Years of James Bond Edition is available now exclusively at Omega boutiques, but will eventually be sold by authorized partners as well. It is not a limited edition, but, like the Omega Speedmaster “Silver Snoopy Award” 50th Anniversary and NTTD Seamaster, it will be limited in production each year. Price: US$ 7,600, CHF 7,000