Editor’s note: Seiko’s divers are the stuff of legend, and deservedly so. And while their back catalogue is full of more classics than is frankly reasonable, the recent re-release of the so-called ‘Turtle’ stands out. The Turtle offers size, retro style and that indestructible Seiko build in spades, and all for a price that’s seriously hard to beat … 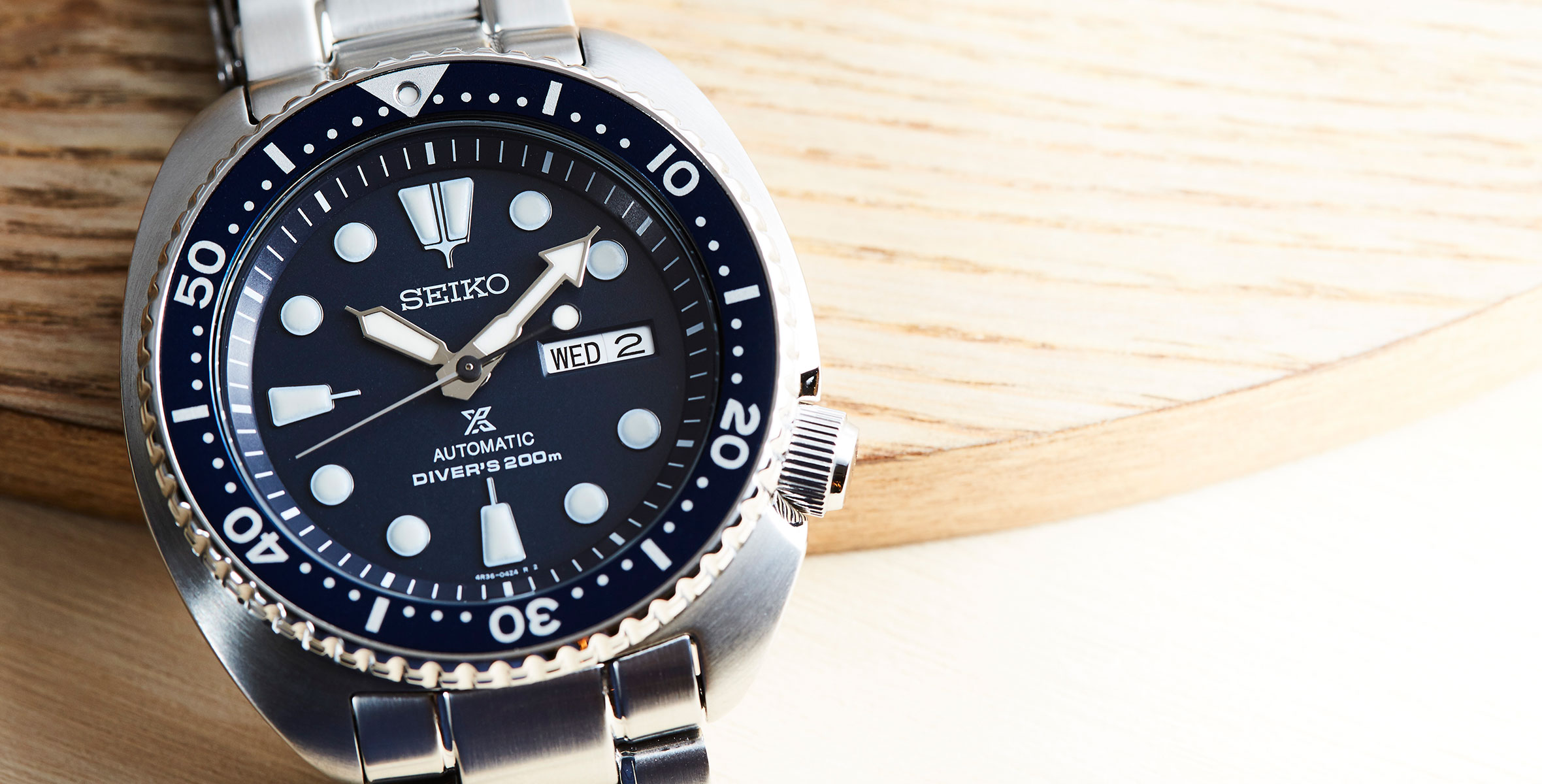 Seiko dive watches have a massive — at times fanatical — following. It’s these guys and gals who are responsible for giving the brand’s cryptically coded watches their colourful nicknames – the Tuna, Monster, Sumo and, in this case, the Turtle. Officially, the Turtles we’re looking at here are known as SRP775 (black gilt dial on bracelet), SRP773 (blue dial on bracelet) and SRP777 (black dial on silicon). From now on, collectively, we’ll just call them Turtles. But wait, there’s more. These SRP77 divers are actually reissues of the original Turtles – historic divers from the 6309 family, produced from 1976 until 1988. Not only is this new version a faithful homage to the original, it also represents nigh-on unbeatable value for money. 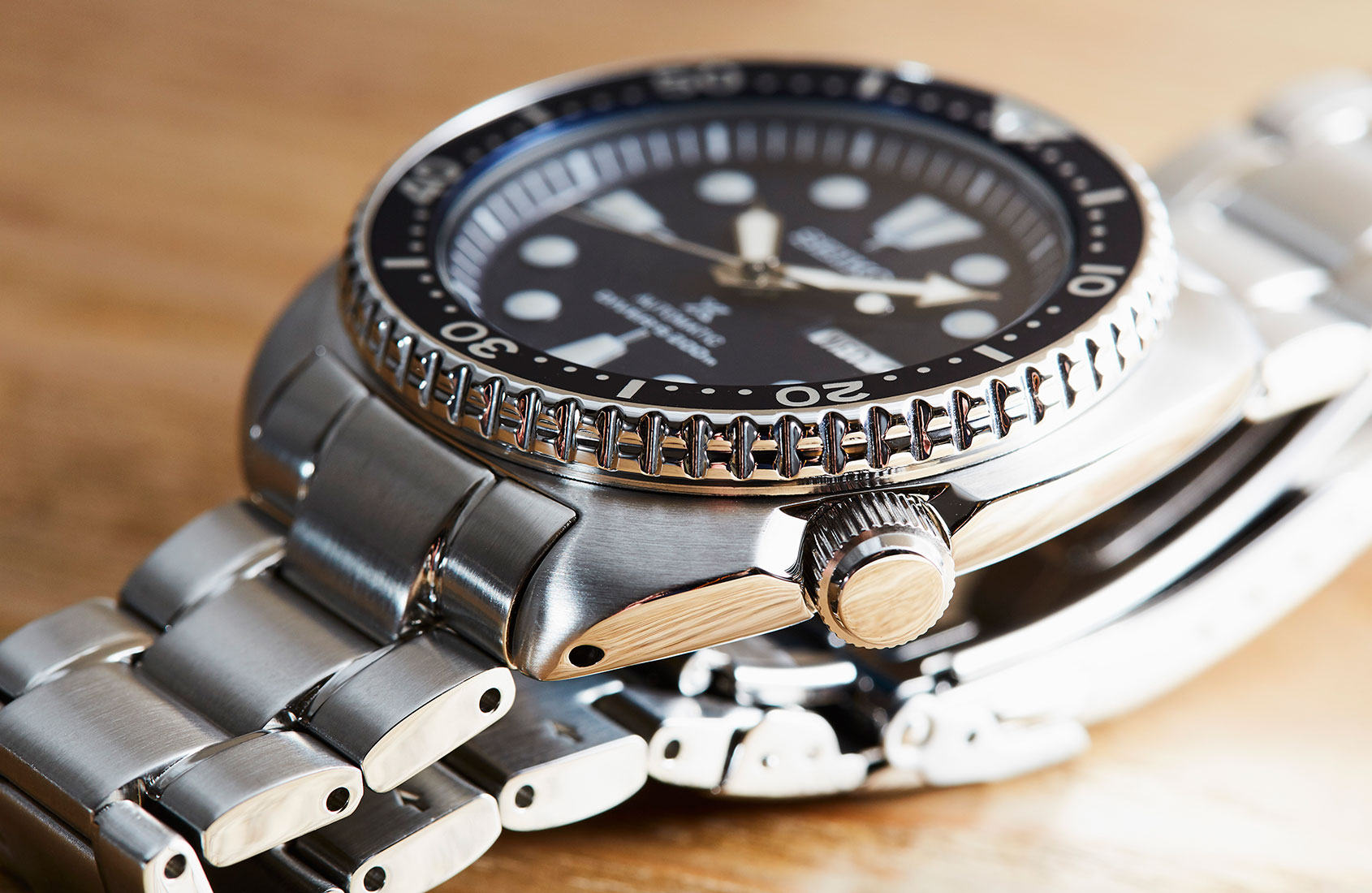 It was the broad, cushion-shaped case that inspired the watch’s nickname, because if you look at it from a distance and squint a little, it resembles the shell of a turtle. Of course, the broad sides have a functional purpose as well, with the ample flanks serving to protect the case, as well as the crown. As you might expect from a diver, overall it’s quite hefty, coming in at 44.3mm across and 14mm high, though the curves make it quite comfortable to wear. The bezel, which protects the Hardlex crystal, adds a lot of height as well as some contrasting texture, thanks to the double row of polished grips. The bezel is unidirectional, with quite a firm action, though it’s not in the same league as you’d see on higher-priced divers. 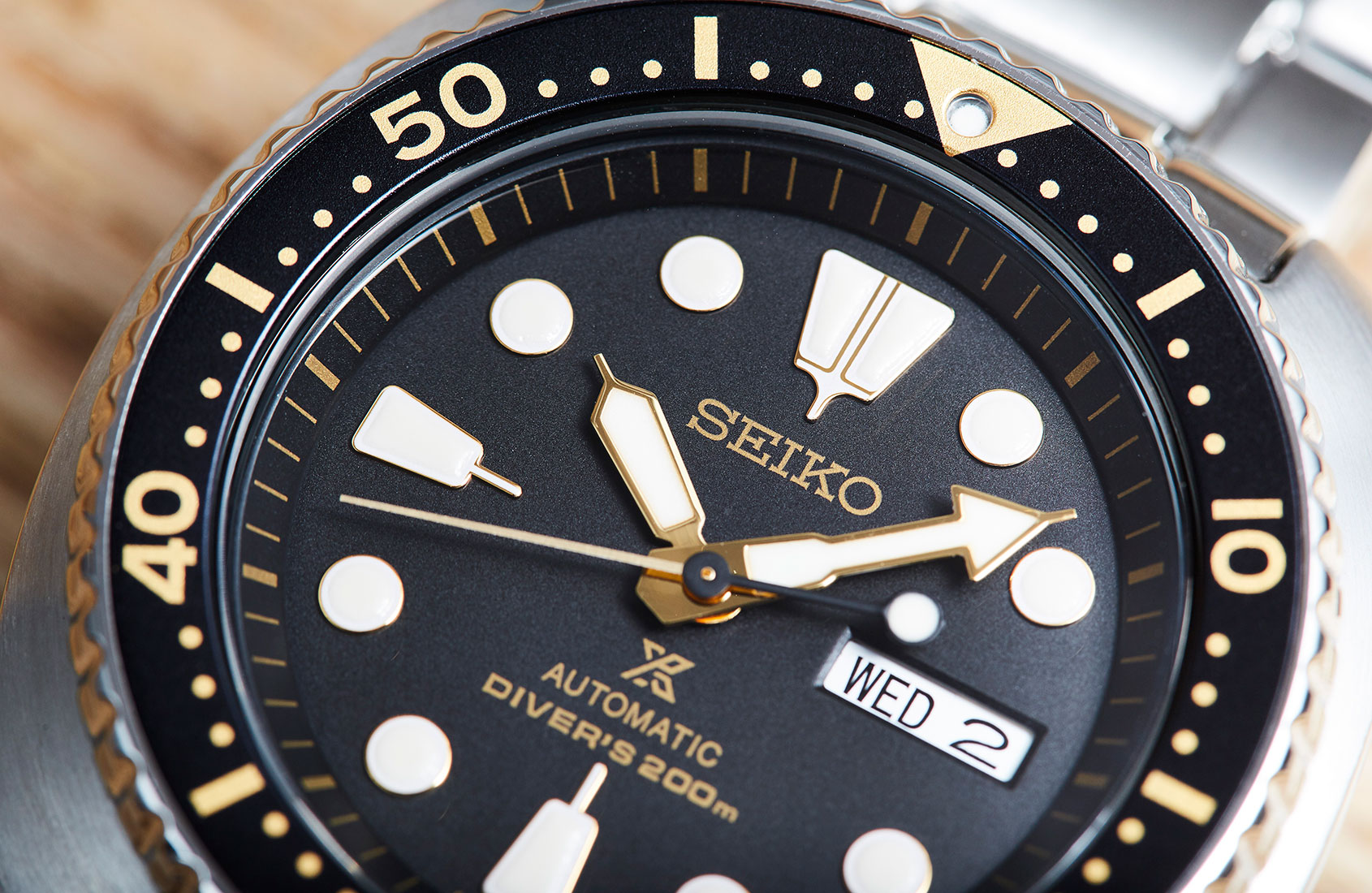 I had a look at three different dial versions of the Turtle. Of these, the black dial/bezel SRP777 is the safest choice, while the SRP773 adds a discreet navy blue to the equation. But the most interesting option is the SRP775, with its gilt details, and gold bezel, dial text and hands. Colours aside, the dials all play from the same book, with a handset and large round indices that are instantly recognisable to anyone familiar with Seiko Divers — much like the ample luminous material that’s also reassuringly in attendance. 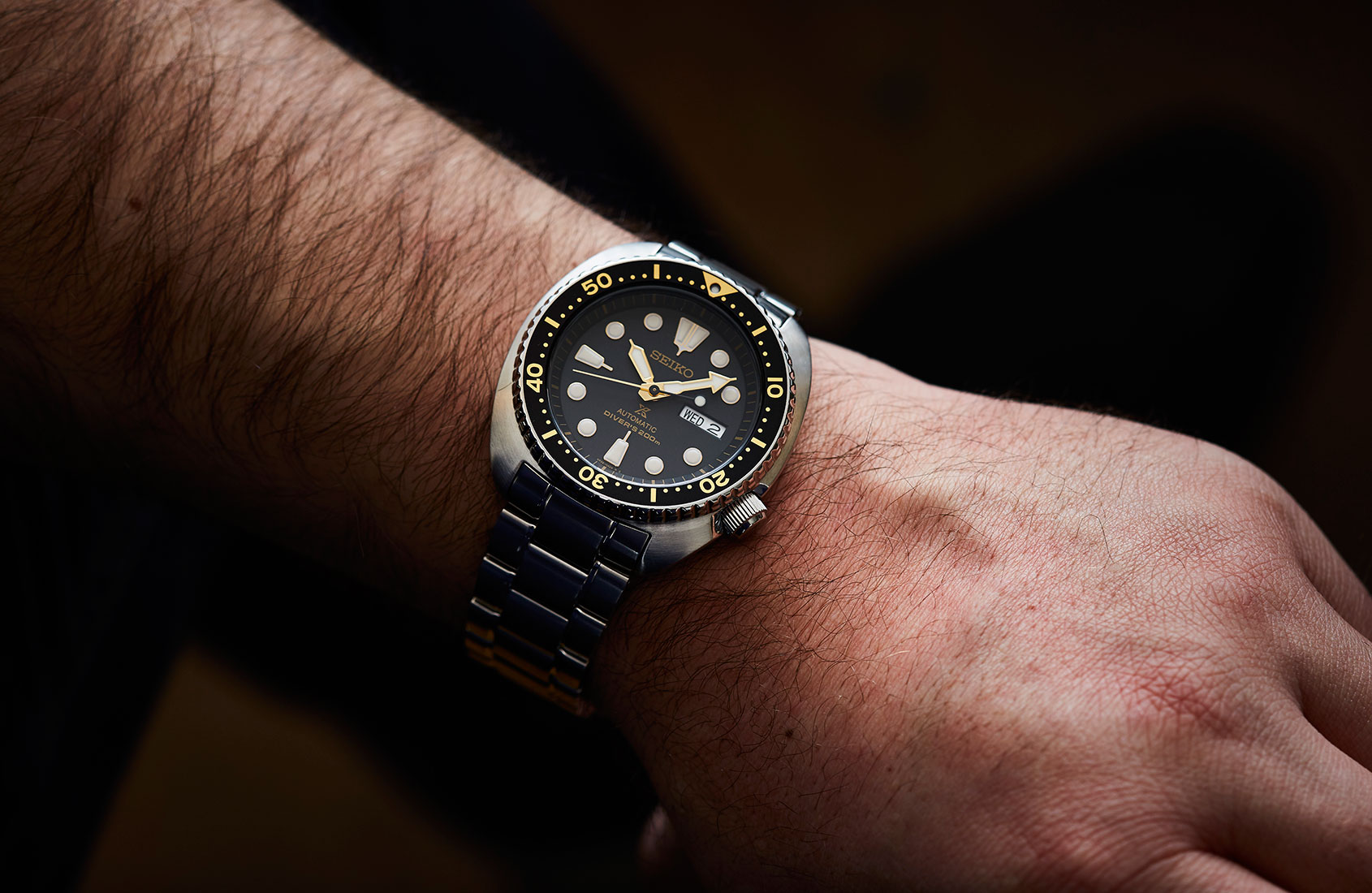 Text-wise, the Turtle has a lot going on, with brand up top, Prospex logo and ‘automatic diver’s 200m’ text down below. It’s a fairly busy layout but it seems to work, adding to the overall Seiko-ness of the watch. I particularly like the ‘Suwa sword’ detail — the sword-like shape that’s part of the 12 marker — which is a nice nod to vintage models, and ties in well to the lines coming out of the six and nine numerals. 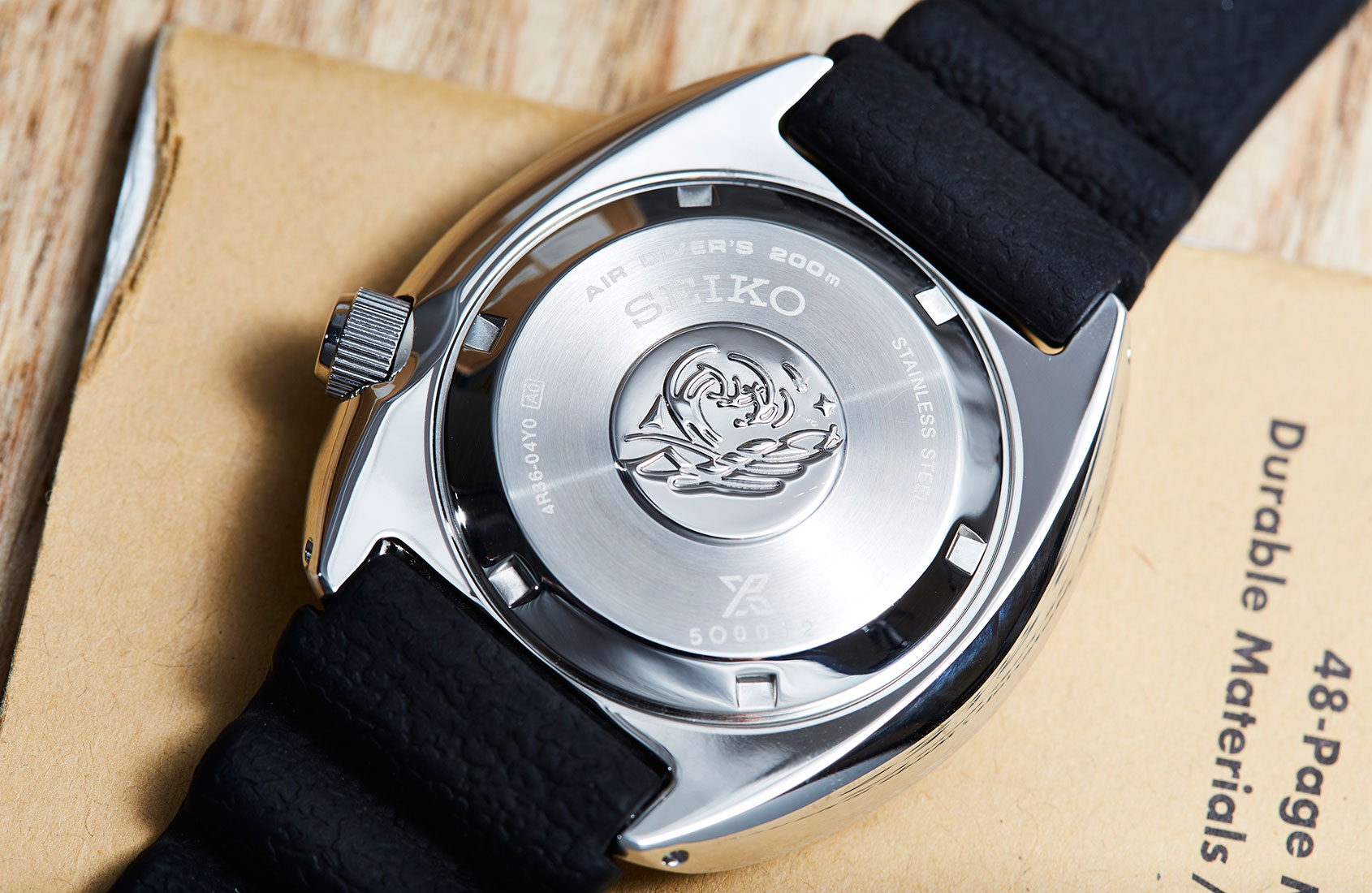 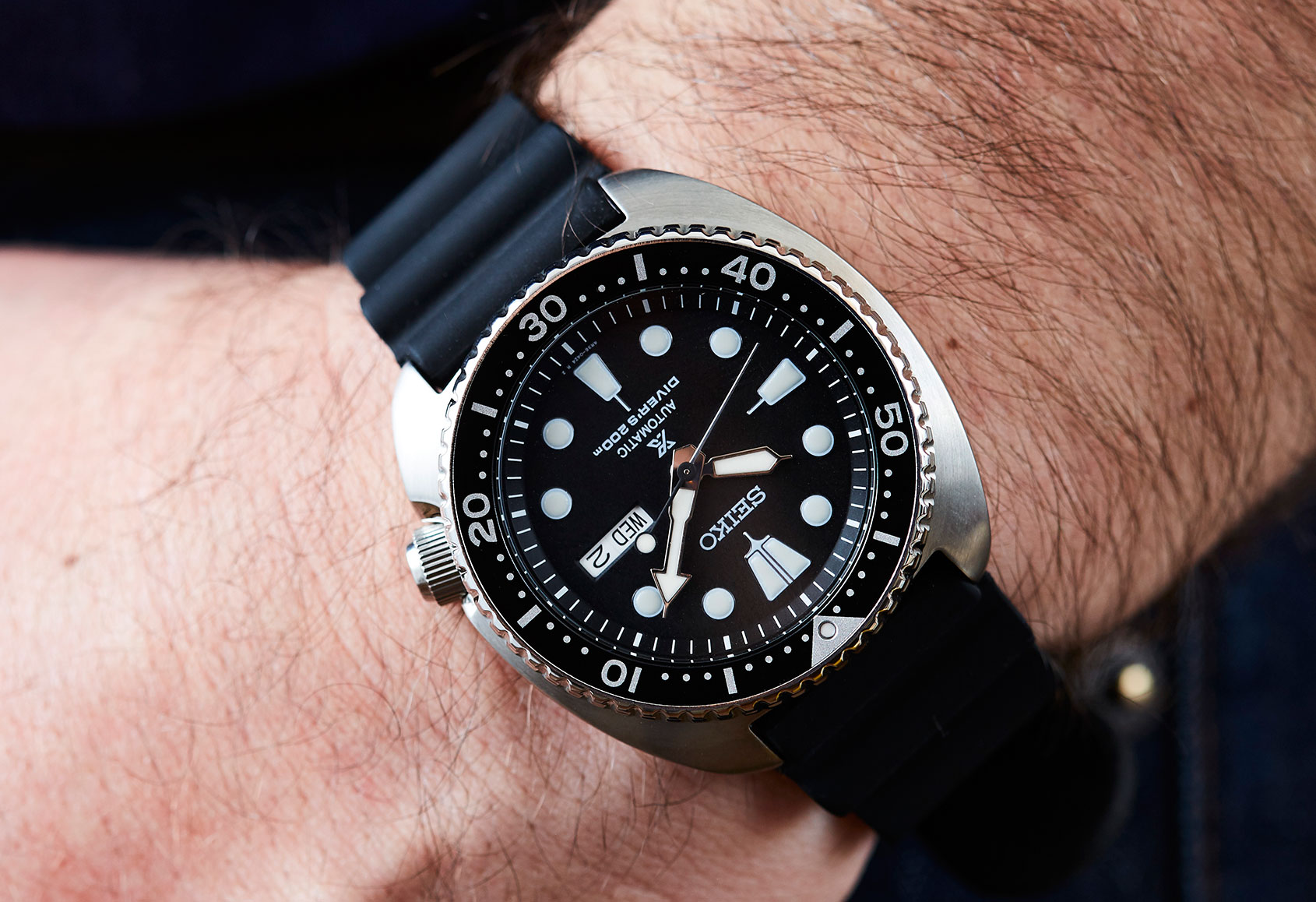 The Turtle comes on a black silicon strap or steel bracelet depending on what version you pick up. The strap is nice and supple, with Seiko’s distinctive wave design and a solid metal keeper, though I found it dug into my wrist a little. The bracelet is a different story, and for an extra $26, I’d definitely go for this option. It’s great quality, solid and well finished, unlike the somewhat tinny bracelets you might be familiar with from older Seiko dive watches. The bracelet tapers to a 20mm clasp, signed with a dive extension – this buckle is the least refined element, but, for the price, that’s totally acceptable. The fact the case has drilled lugs is a nice touch and makes strap changes fairly painless. 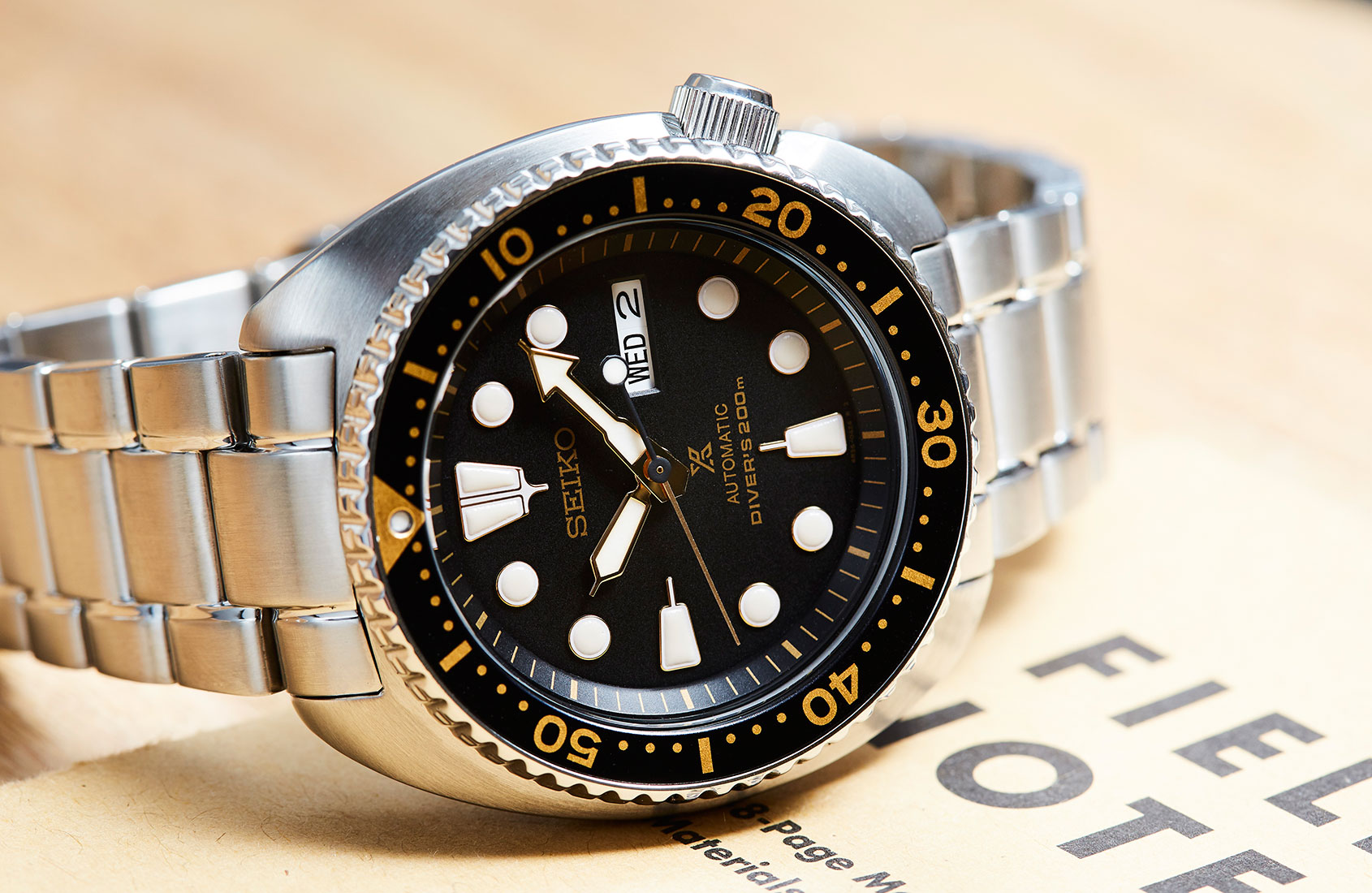 The Turtle has been a huge hit this year, and it’s easy to see why. It’s good looking, iconic, well-built and the whole thing costs less than a strap from a big-name Swiss brand. Given these facts, it’s hard to find fault. The only thing you could possibly have against it is that, at 44mm, it’s a bit large, and with its heft, it doesn’t exactly disappear on the wrist. Regardless, while Seiko have been comparatively slow to get on the reissue bandwagon, the Turtle proves that when they put their minds to it they can issue a banger of a re-release, faithful where it matters, and updated where it counts.

Guess how much this cost? Seriously, go on.