Creating a timepiece that needs to pay homage while simultaneously capturing the imagination of the horological community is no mean feat … in fact, it’s fraught with failure.

Time and time again, we’ve seen new watches based on vintage timepieces be unveiled, only to have them fall flat on their crystal-domed faces. 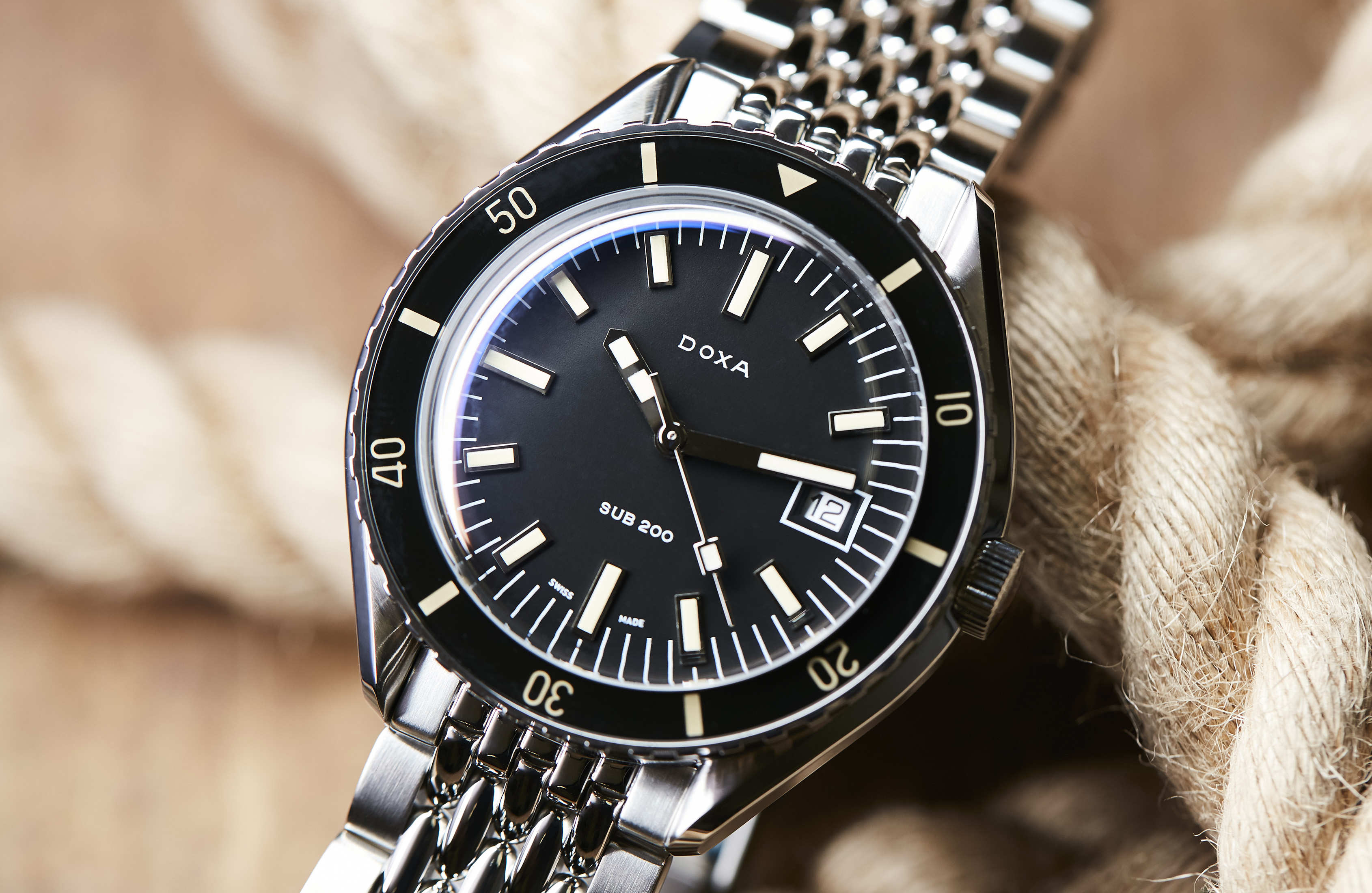 Unveiled at this year’s Baselworld, the DOXA SUB 200 aims to avoid the same fate as some of its counterparts.

Based off the first-ever commercially available timepiece with a helium escape valve, which DOXA famously co-created with Rolex and released in 1967, the new SUB 200 has a lot to live up to. 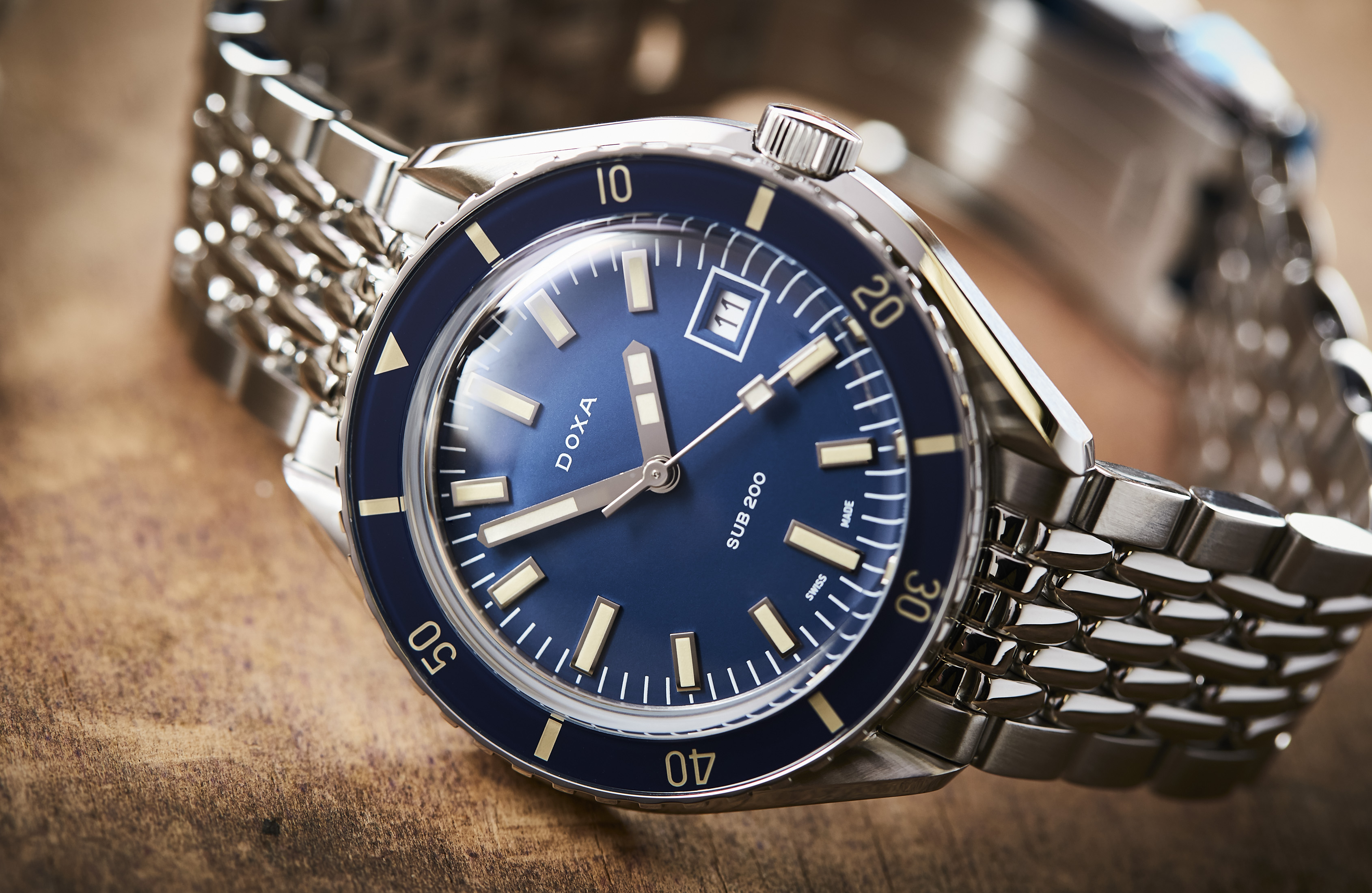 We’ve been able to spend a bit of time with the new amphibious timepiece and, thankfully, the initial impressions are good.

For a start, the design of the 316L stainless steel case, which measures 42mm across and 14mm thick, has been very thoroughly thought-out, and gives a decent level of classic flair without looking like a pastiche. 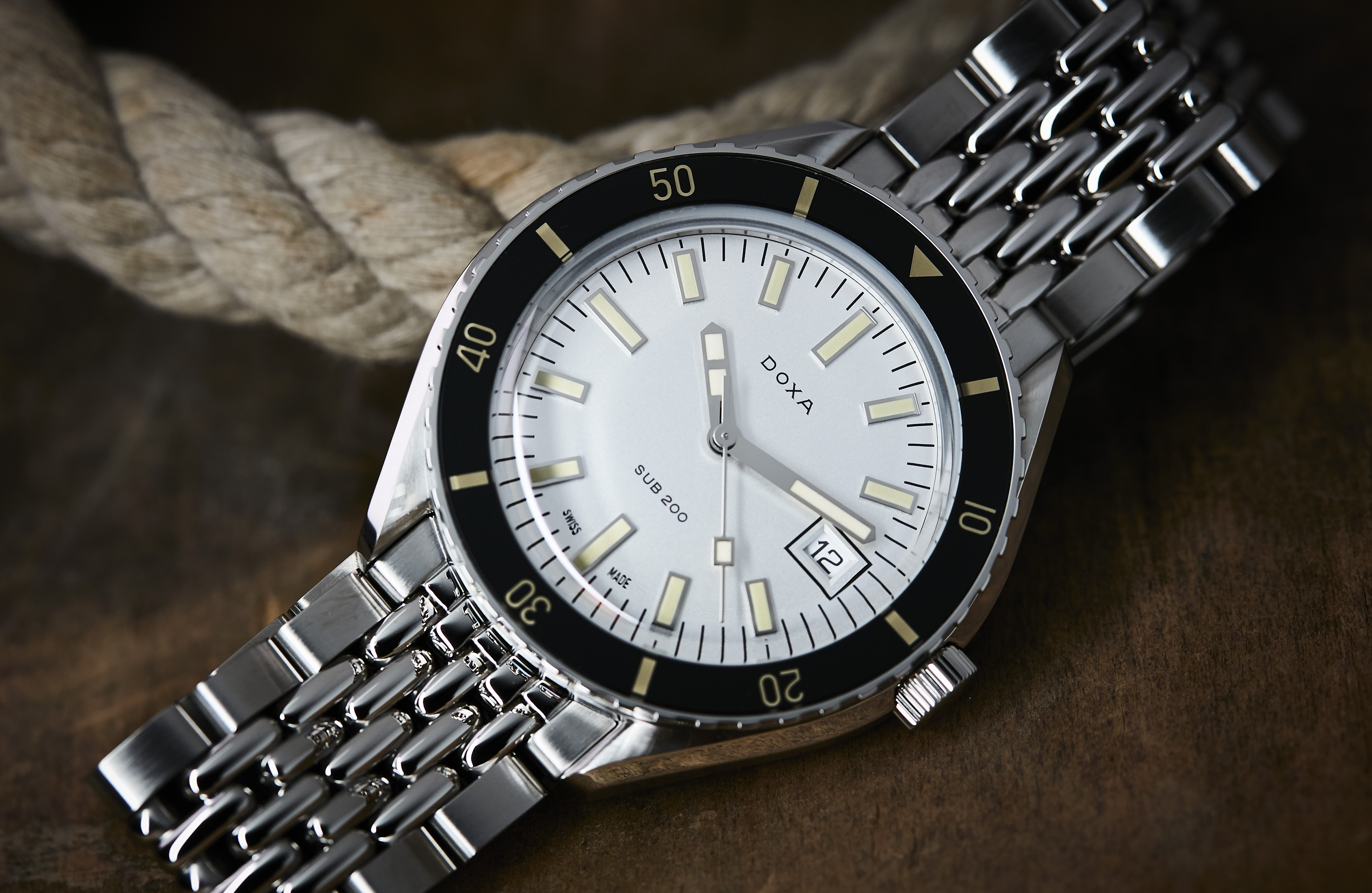 It’s more rounded than you may think, and due to shorter, curved lugs, the argument could be made that despite the measurements, the SUB 200 actually wears more like a 41mm watch.

Those wanting to take the dive watch into its intended environment can be more than confident of its capabilities. Thanks to features like a screw-down crown (emblazoned with DOXA’s signature orange fish logo) and a screw-down case-back, the dive watch serves up a substantial 200 metres of water resistance. 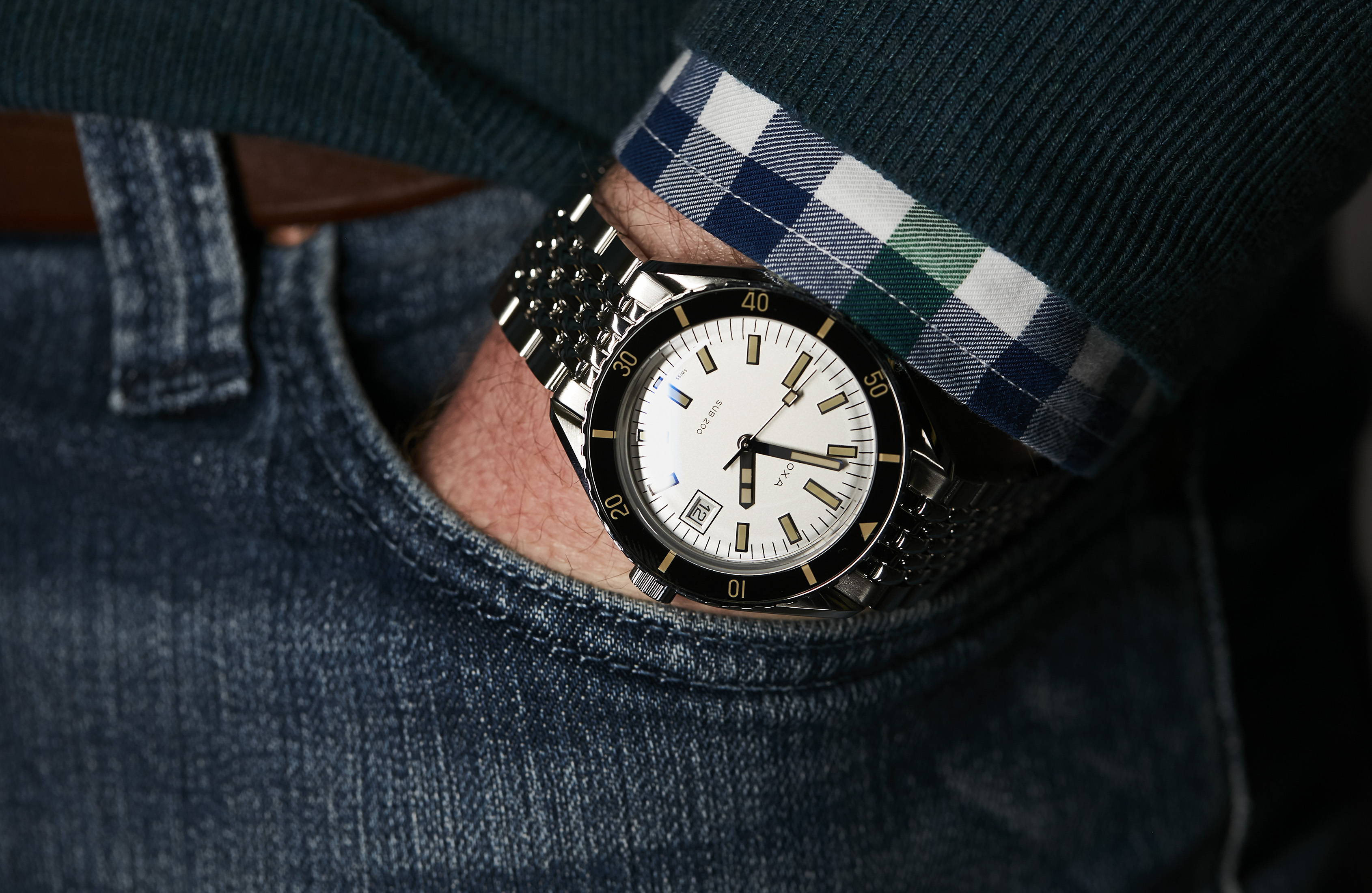 The unidirectional rotating bezel is a joy to use, offering great tactility and a satisfyingly sonorous click as it smoothly rotates around the case. There’s zero play in the bezel either, which is an accolade that quite a few more expensive dive watches cannot achieve. Its also been treated with Super‑LumiNova, adding an extra layer of practicality.

The top of the case is capped with a significantly domed sapphire crystal with an anti-reflective treatment, which ensures optimum levels of legibility in all conditions and also harks back to the original DOXA dive watches, which featured domed plexi. 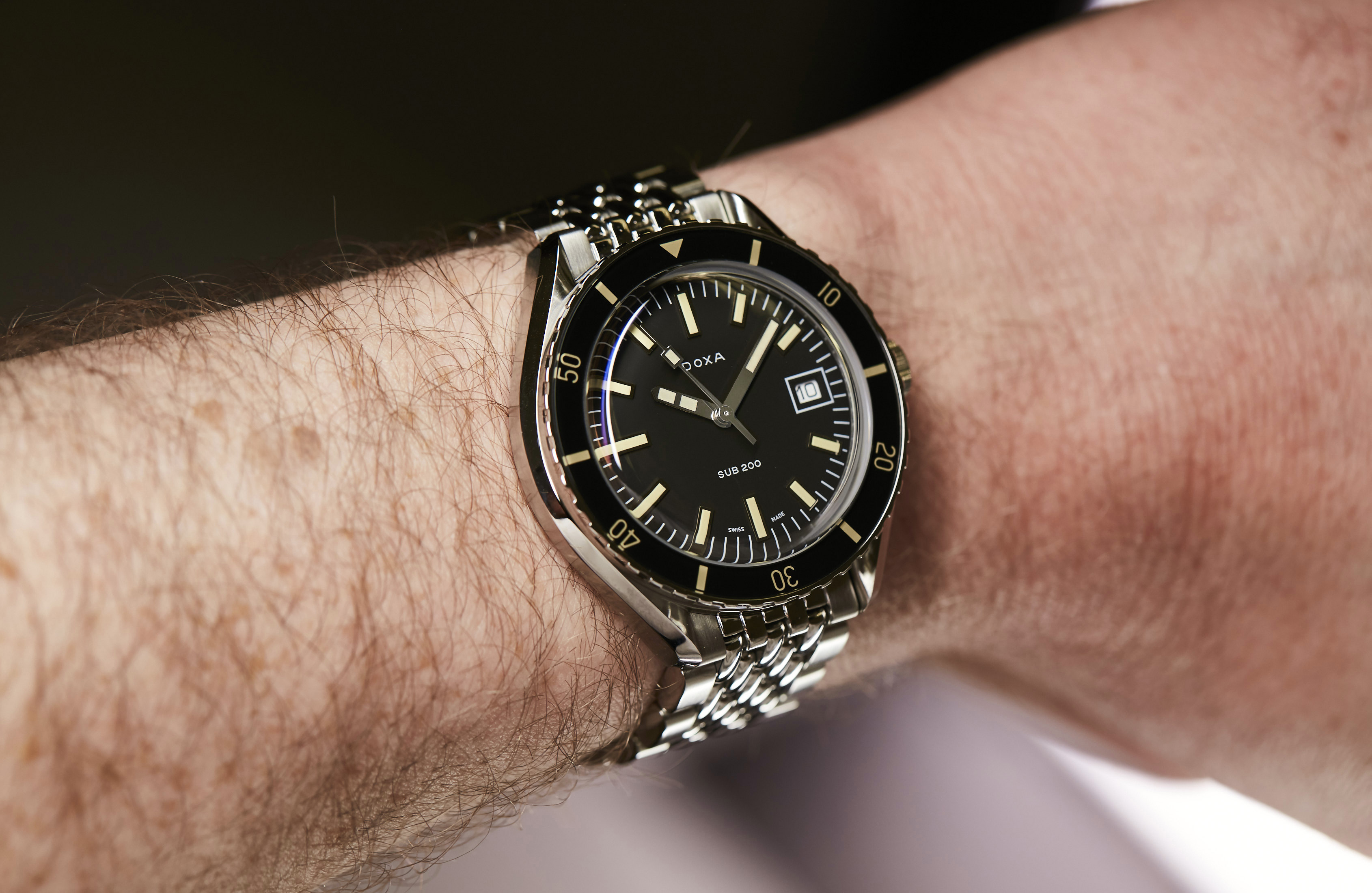 Beneath the crystal, the new dial design is pleasingly sparse, and admirably walks the line between old school and new. The baton-style indices are appropriately proportioned relative to the rest of the dial, and feature a creamy coloured Super‑LumiNova. Contrasted with a distinctive open chapter ring, the highly polished or painted handset is also very much in keeping with the rest of the dial’s aesthetic.

Available in six dial colours — including black, navy, orange, silver, turquoise and yellow — the SUB 200 also presents a great amount of bandwidth, and can cater to a wide array of personal tastes. 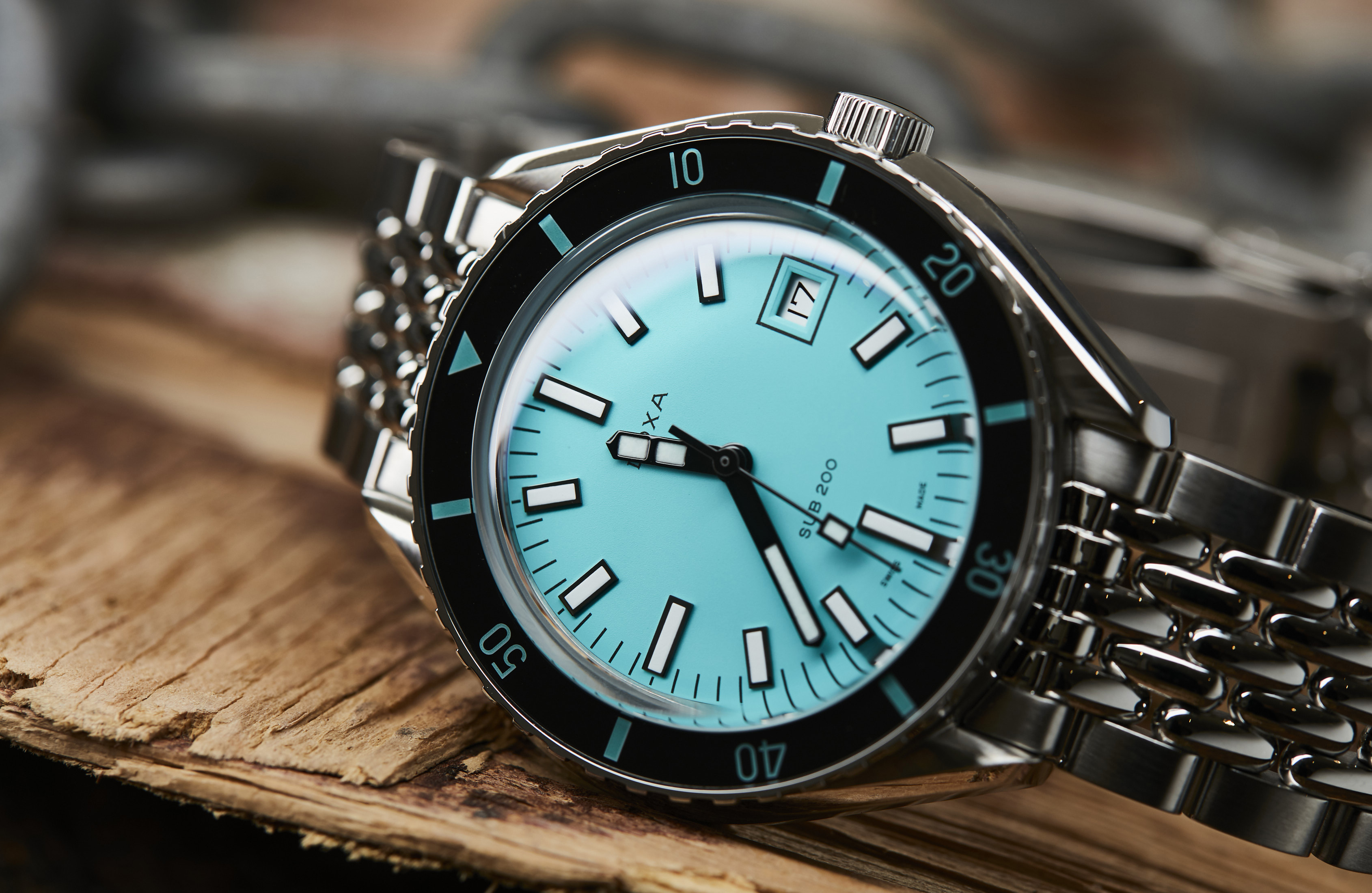 Powering the versatile timepiece is ETA’s brilliant 2824-2, which offers up automatic winding, date complication, 25 jewels, 38 hours of power reserve and a quintessential operating frequency of 28,800 (4Hz) vibrations per hour.

The SUB 200 is fitted with a “beads of rice” style bracelet that feels weighty and substantial on the wrist, and features a folding deployant clasp with diver extension.

Perhaps the biggest boon about this new DOXA, however, above all else, is the price – it retails for just $1590 AUD.

Little wonder, then, the new SUB 200 has been lauded by pundits, with Watchtime calling the collection, “One of the Best Values of 2019”. 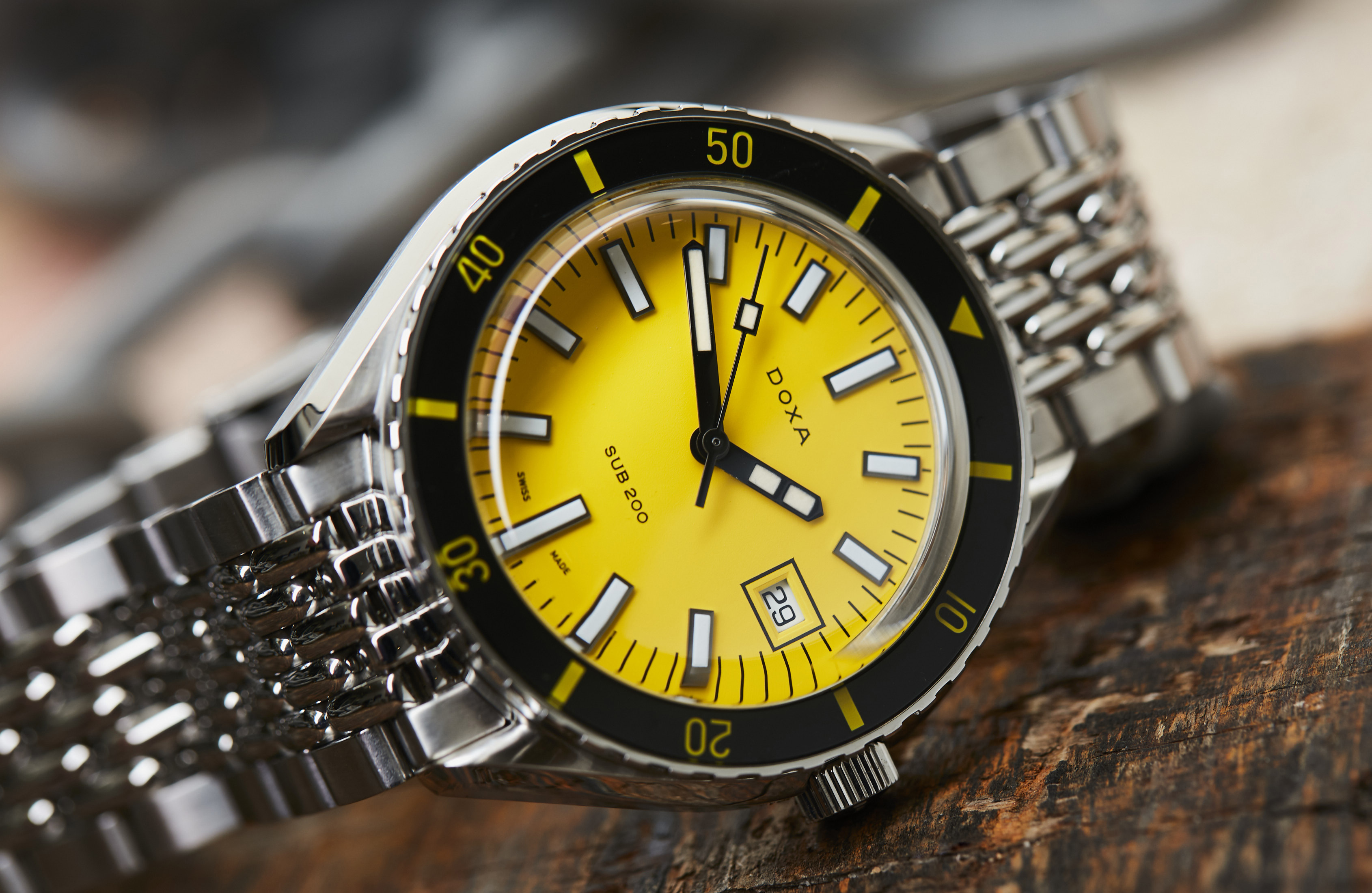 The horological elite has also sung the praises of the new submersible timepiece, as evidenced by its nomination in this year’s GPHG Challenge category.

So, while many fail at reviving a classic wristwatch for the modern age, it would appear that the DOXA SUB 200 has succeeded, resoundingly. And that’s important, not only for longtime collectors and watch enthusiasts but also the next generation of wristwatch aficionados, looking for their first “nice” watch.

Time+Tide is proud to be the exclusive Australian distributor of DOXA Watches, though our love for the brand started way before then.