Recently, Time+Tide put out an Instagram survey asking you, the reader, to express your opinion about wearing a smartwatch on one wrist and a mechanical watch on the other. I was really surprised to see the survey turn out heavily against this practice and here’s why … 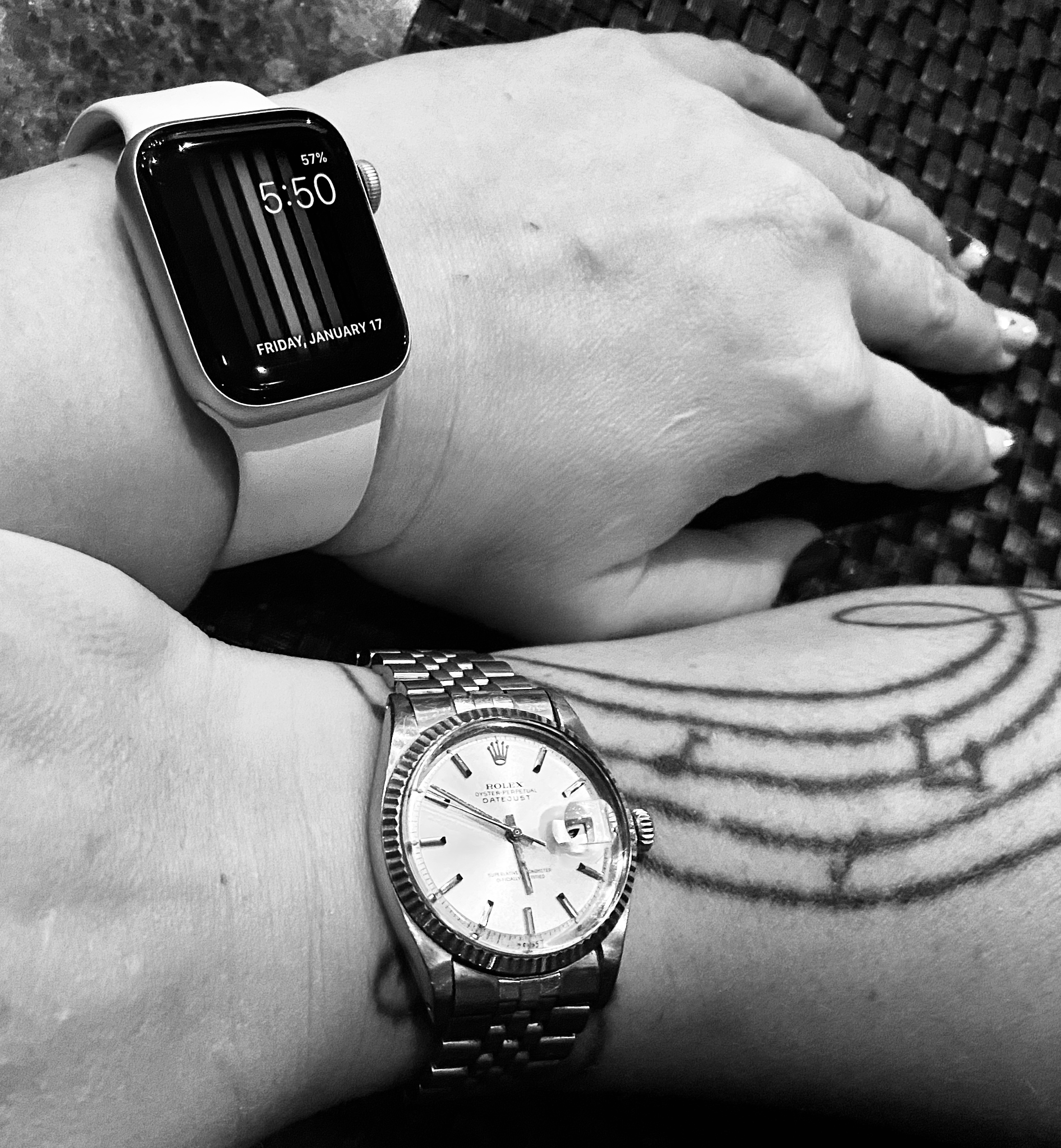 I like tech just as much as the next person. I’ve got an iPhone, an iPad, a laptop, a connected smart home theatre set-up, and my car can keep me from cutting someone off. I think technology has vastly improved the way we get things done and the speed at which we can accomplish communication. In defence of technology, it’s by and large pretty great. One tech item I don’t possess is a smartwatch. Like many Time+Tide readers, I’ve been resistant to the trend, much in the same vein as a lot of auto enthusiasts are to electric cars. My partner, on the other hand, has wholeheartedly embraced an Apple Watch Series 5 since Christmas. When I asked what she was going to do with the beautiful vintage linen-dial Omega she had been wearing for the last year, she simply replied, “Well, I’ll wear that too!”

At first, I was quite sceptical about this new arrangement, but as time went on, I observed her behaviour towards the two watches. During the weekday, she paid a lot of attention to the Apple’s bright display and its myriad notifications. In the evening and at the weekend, I caught her glancing more often at the Omega. On a few occurrences out in public or at work, she was asked by others why she was wearing two watches and she seemed more than happy to extol the functionality of her new Apple Watch while at the same time explaining enthusiasm for the vintage, time-only, manual-wind device on her other wrist. I was very impressed by her confidence in being a “double-wrister”, as it was clear she was not willing to compromise on taste, style and functionality in any direction. 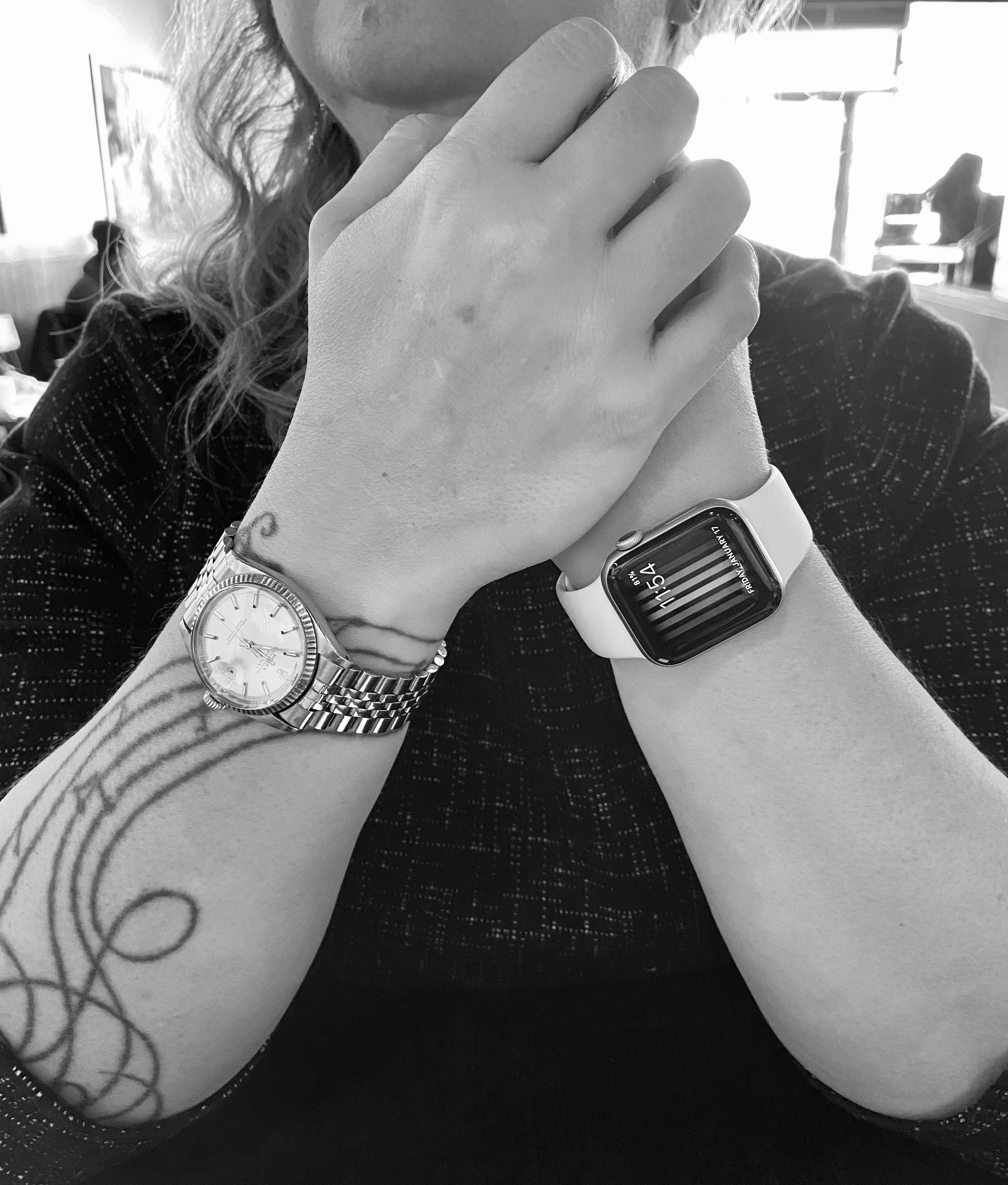 The other night we attended a small dinner party with a few friends. Out of the five of us present, only I was not wearing an Apple Watch. Aside from a variance in straps, there were just four black squares waving around on people’s wrists as they talked. It crossed my mind that if they were all also wearing different mechanical wristwatches, that wouldn’t necessarily be a bad thing! I feel that as we progress deeper into this digital existence, things like watches can now, more than ever, serve as an escape and differentiator from the abundance of black screens. Since we must have our little black screens everywhere we go, then why not have an alternative along for the ride that is simply a companion of style, values and self-expression?

The rapid spread of information, communication and networking can be thanked for significantly increasing the profile of watch enthusiasm over the last decade. I don’t think we need to necessarily push back too hard, as the smartwatch can deliver the latest news from your favourite watch website, or notify you of an upcoming RedBar meet-up. I drew a faint parallel earlier in this article about electric cars. Unfortunately, once autonomous electric cars become prolific, we probably won’t have much choice in what or how we drive. But we will always have two wrists and that, I firmly believe, will bolster our chants of “Long live the mechanical watch!”