High-fashion, low rent refers to the playful relationship between the rarified objects in life with the more mass-produced and accessible. G-Shock often delivers great examples of this interplay, whether it’s Tom Sachs’ Casio G-Shock, featured in A Man & His Watch, that he customised with a Hermès-esque Cape Cod double-loop strap, or even the full metal gold-tone G-Shock. These are products that you anticipate to be a dime a dozen but that have, in fact, been executed in a way that nudges them into a far more exclusive bracket. 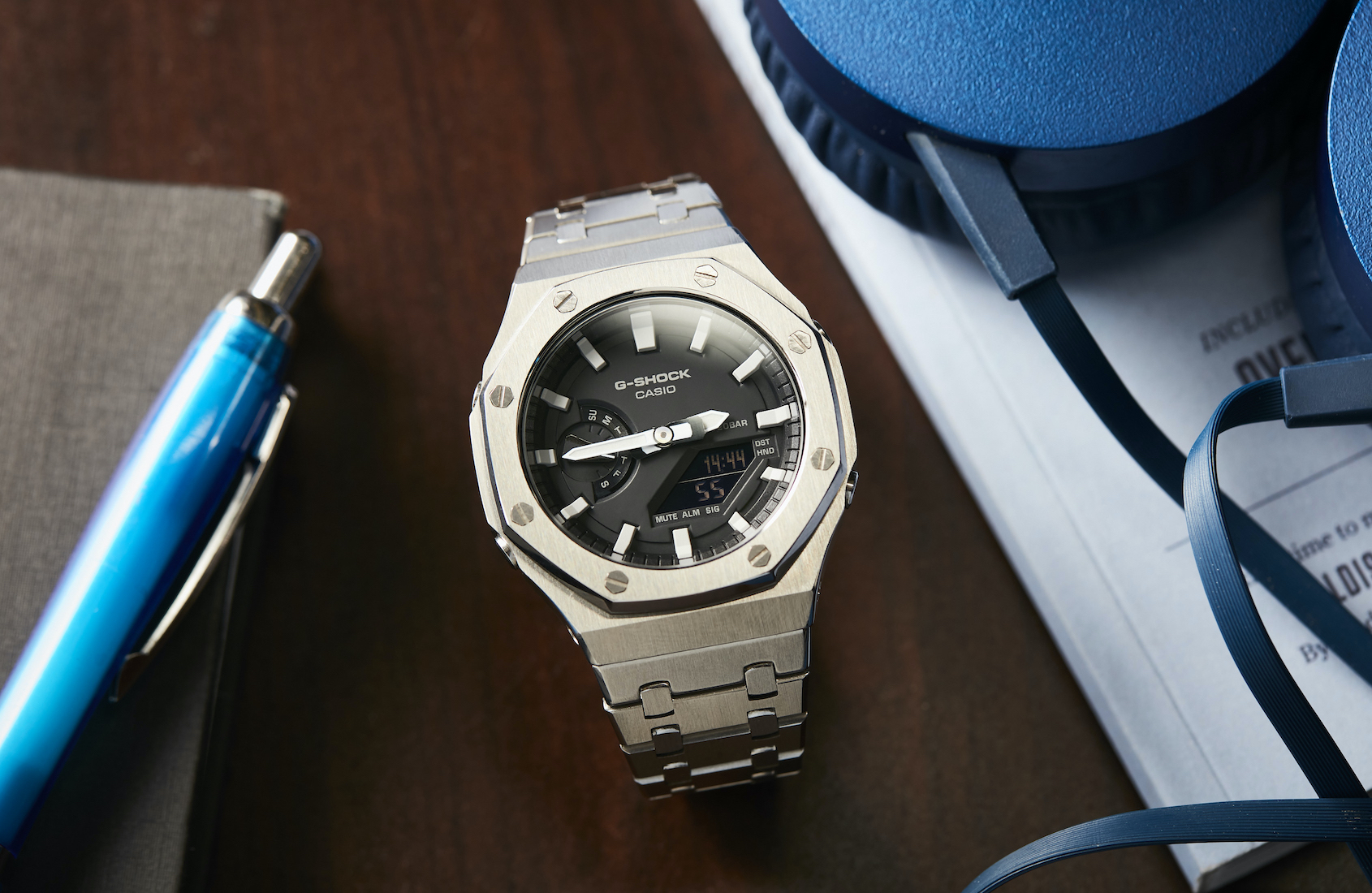 Another great example of high-fashion, low-rent is the Casio G-Shock GA2100-1A (AKA the CasiOak). Thanks to its slimline case profile and octagonal bezel, it presented the watch community with a way to engage with the design of an iconic timepiece – Gerald Genta’s Audemars Piguet Royal Oak – a watch that would likely remain forever out of most watch buyers’ reach. So what did we start to see shortly after the CasiOak’s release? Modification kits that anyone could use at home to make their new Casio look a little more refined and Vallée de Joux. 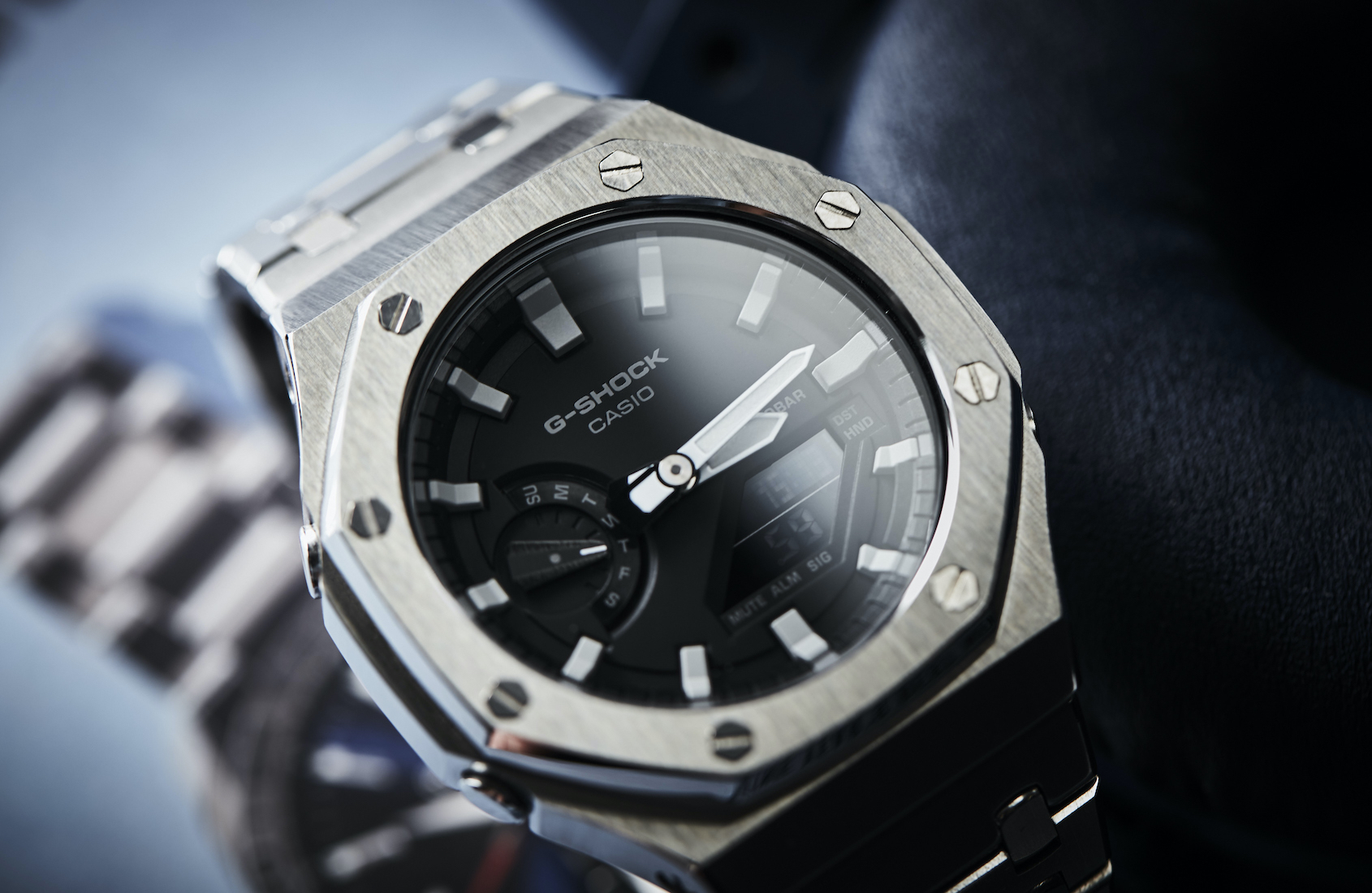 Now, modification in the watch world isn’t a new thing. In fact, there is an entire industry built on the back of enthusiasts who like to tinker with their watches to get them just right. And while this tinkering is usually focused on the more affordable end of the market, it certainly isn’t populated by those whose buying power is limited. You’re more than likely to see some of the most interesting watch modifications executed by serious collectors. 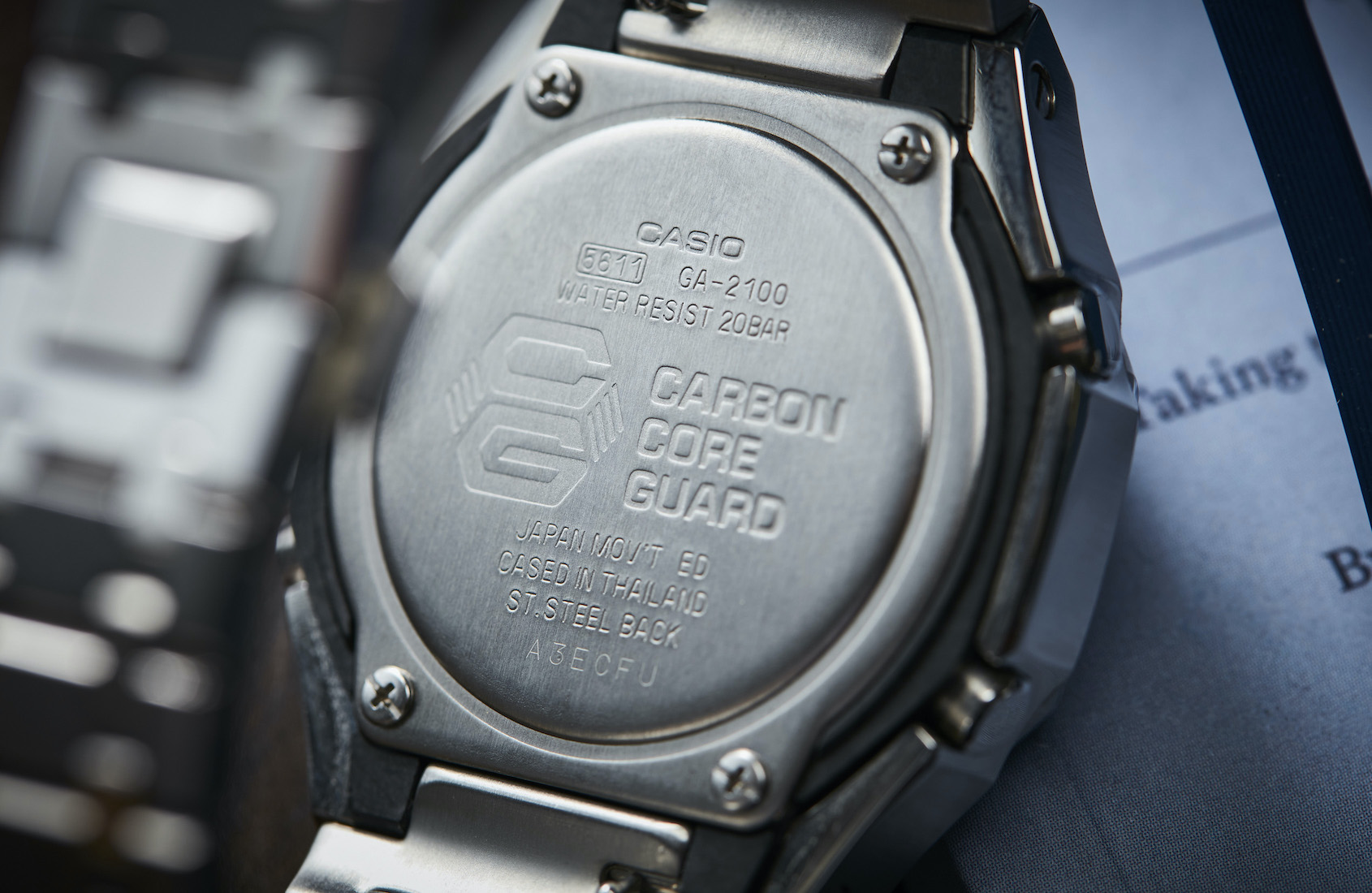 So how did I become aware of the of the option to turn the CasiOak Genta inspiration up to 11? Instagram of course. While scrolling through my feed one day I saw a photo that made me pause, because it was one of the most complete and sophisticated modifications I’d ever seen. This wasn’t just a painted dial or new ceramic bezel insert. It was an entirely new case and integrated bracelet, complete with an even brushed finish and butterfly clasp for the bracelet. Wow. 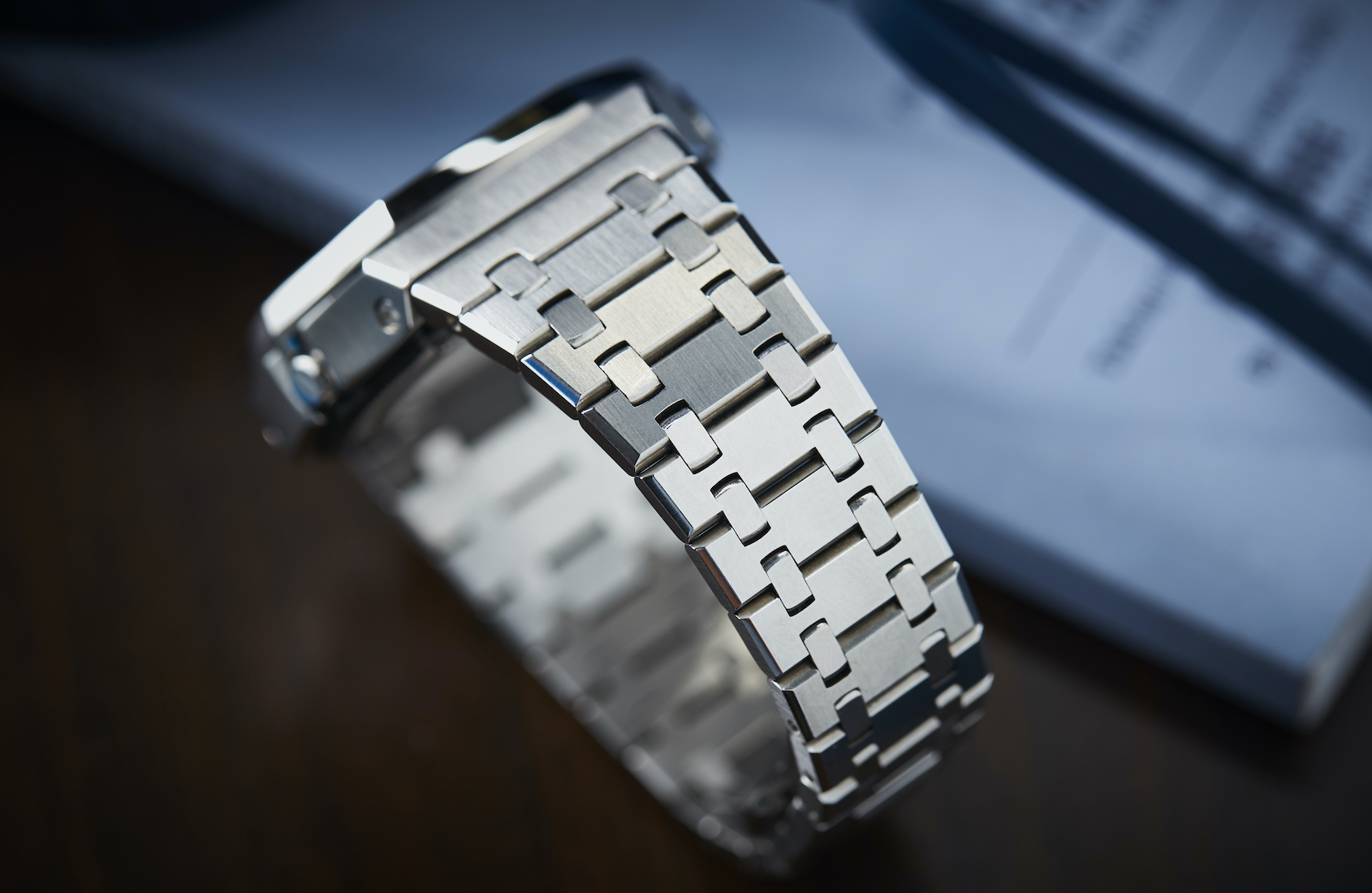 I didn’t think too much of it until, in the dark depths of the Melbourne lockdown last year, I saw a complete set with the modification kit and the Casio G-Shock GA2100-1A come up on sale in a local watch sales group. The price was just $200AUD, so I sent the gentleman a message enquiring about the watch. Within a few days it arrived at my door and I had it in my hands. 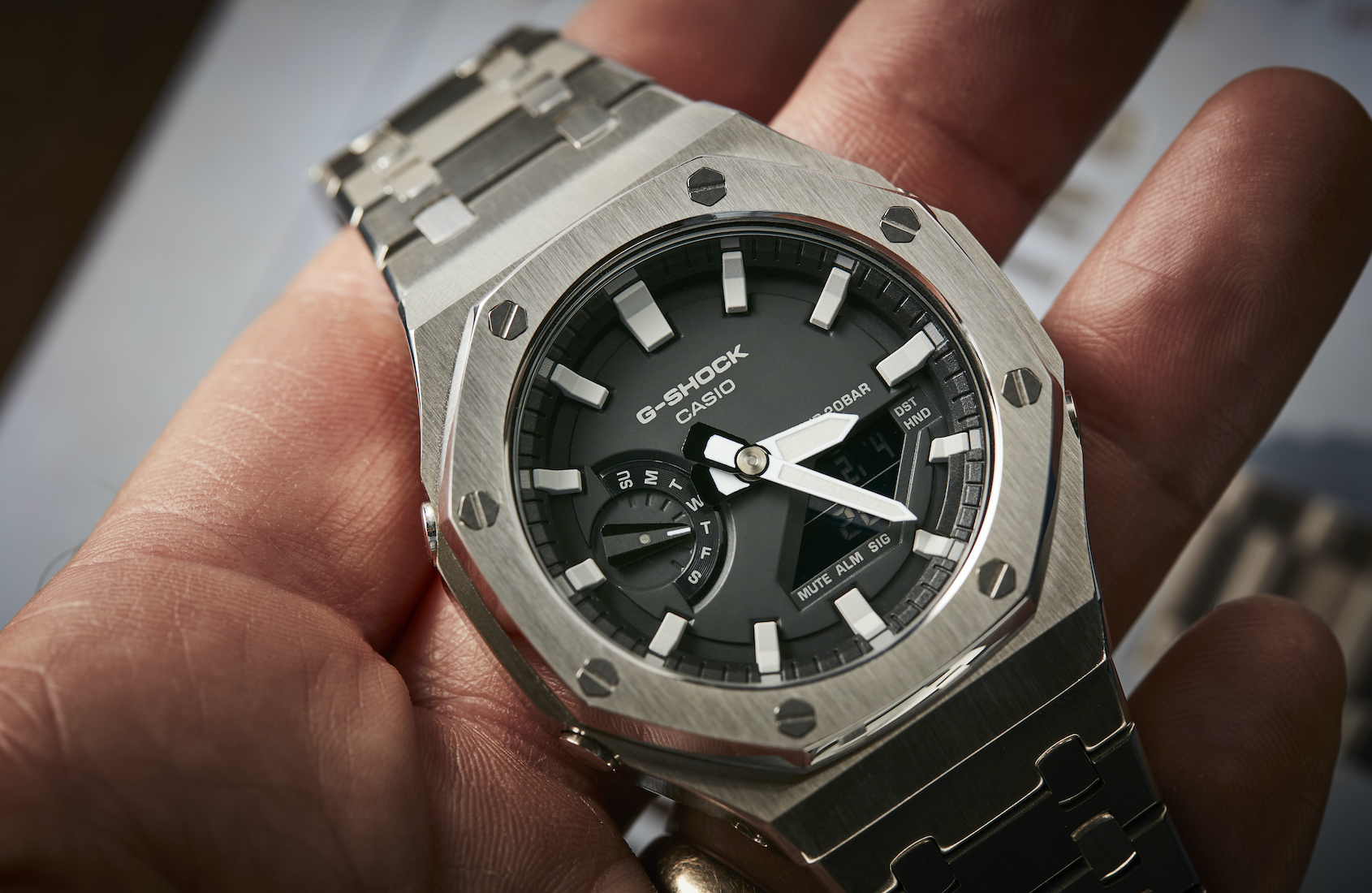 I sat down with the box and opened it, finding the original box and papers for Casio, as well as the kit for the modification. The modification kit included the case and bracelet for the watch, as well as a set of screwdrivers that you’d need to actually do the modification. Overall, the kit looked to be fairly well made for what it had cost with the tools doing everything they needed without any drama. 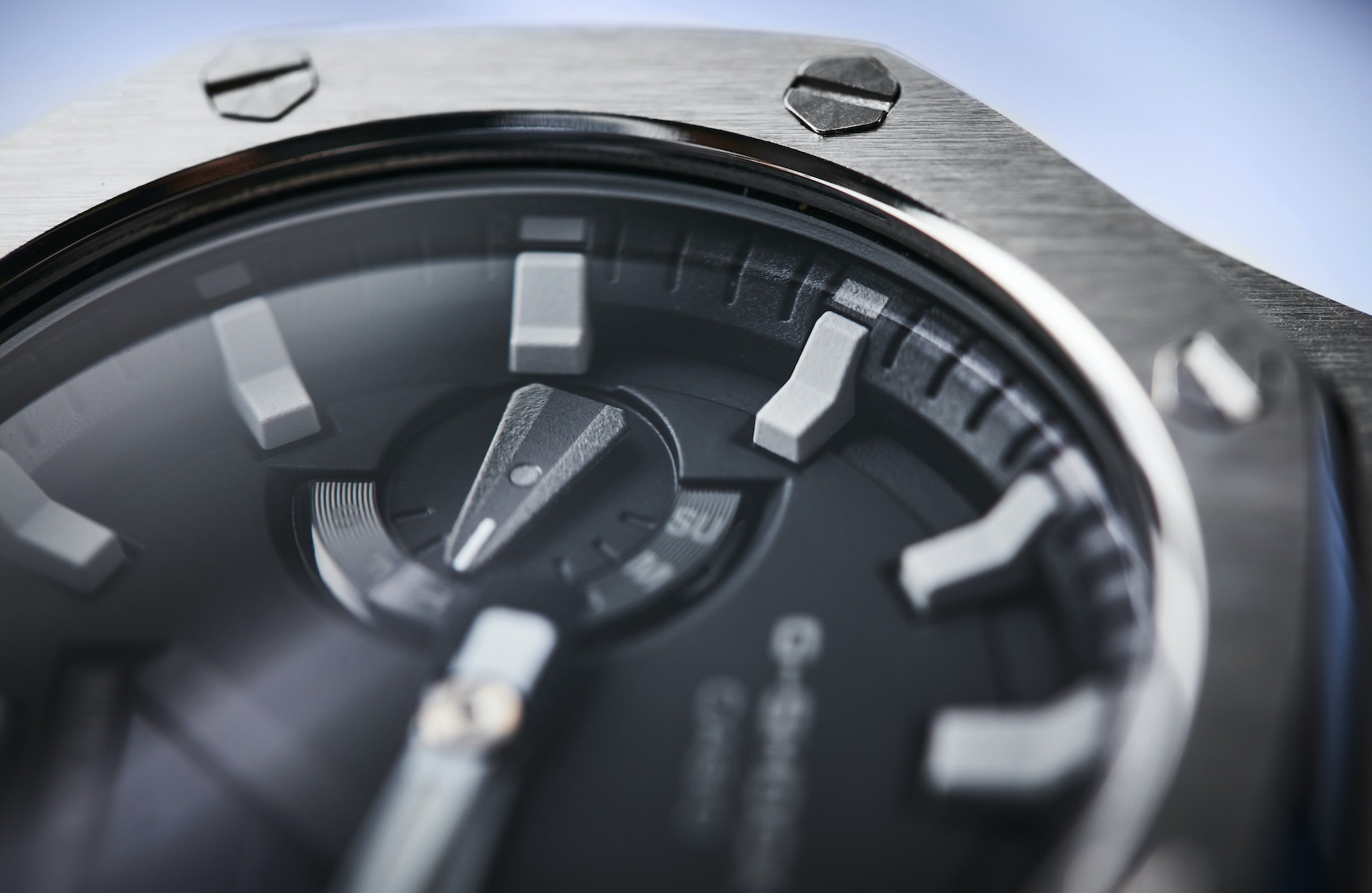 In terms of the quality of the case and bracelet, I’ll admit my expectations were pretty low. After all, the RRP of the Casio alone was nearly 50% more than what I had paid for the entire package. Once I had the bracelet in my hands, however, it was hard not to be pretty impressed. The bracelet could be adjusted by removing the link screws, which was simple to do and it secured around your wrist easily with the butterfly clasp that was invisible when closed. 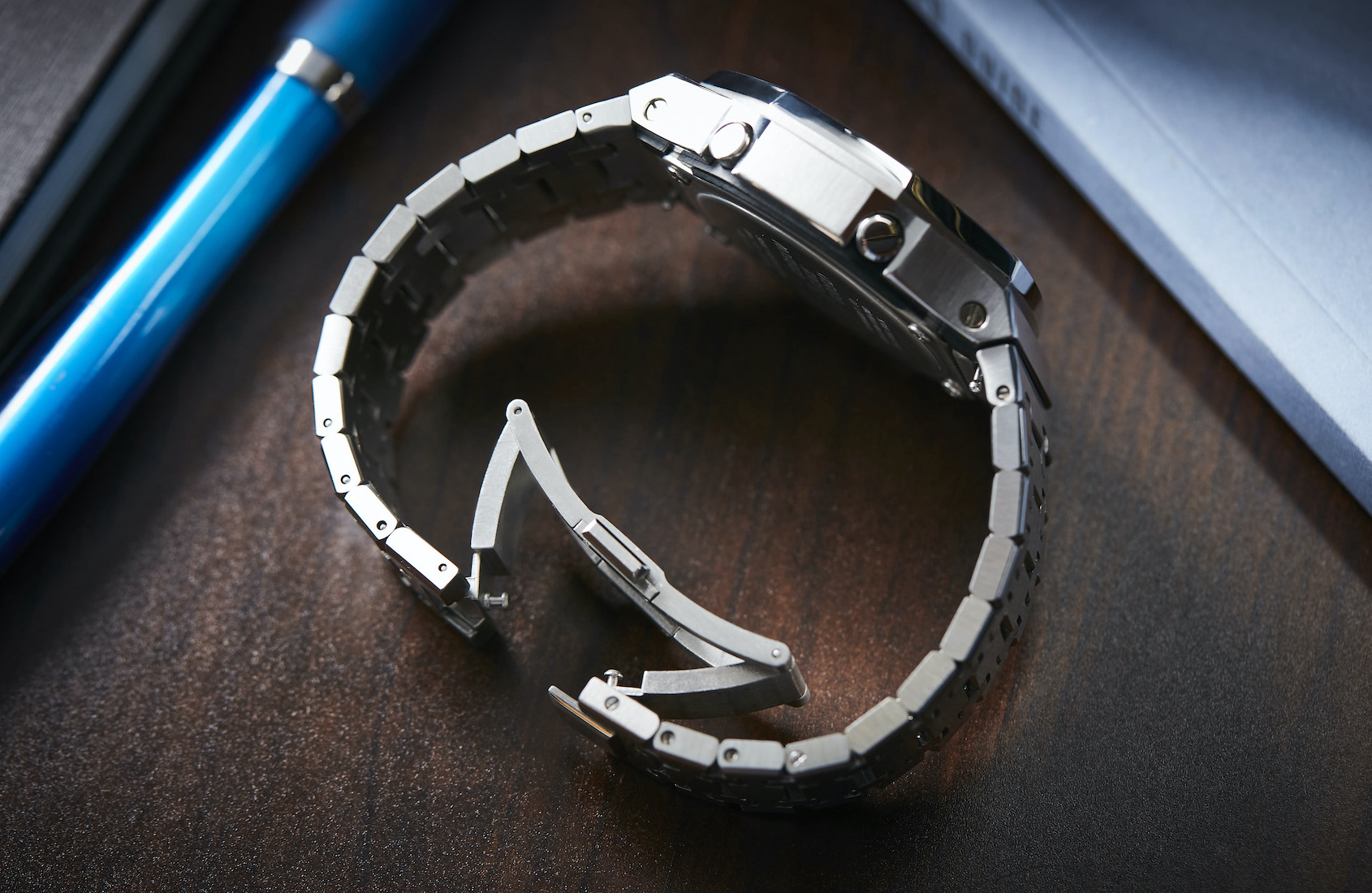 What also impressed me was the level of detail that had been achieved with the bracelet and case. The bracelet tapered nicely from the case, with each link featuring vertically brushed flat surfaces and faceted edges. Likewise the flat surfaces of the case were vertically brushed, and the sloping sides of the bezel were polished, and the cut out apertures for the four buttons on the case sides. 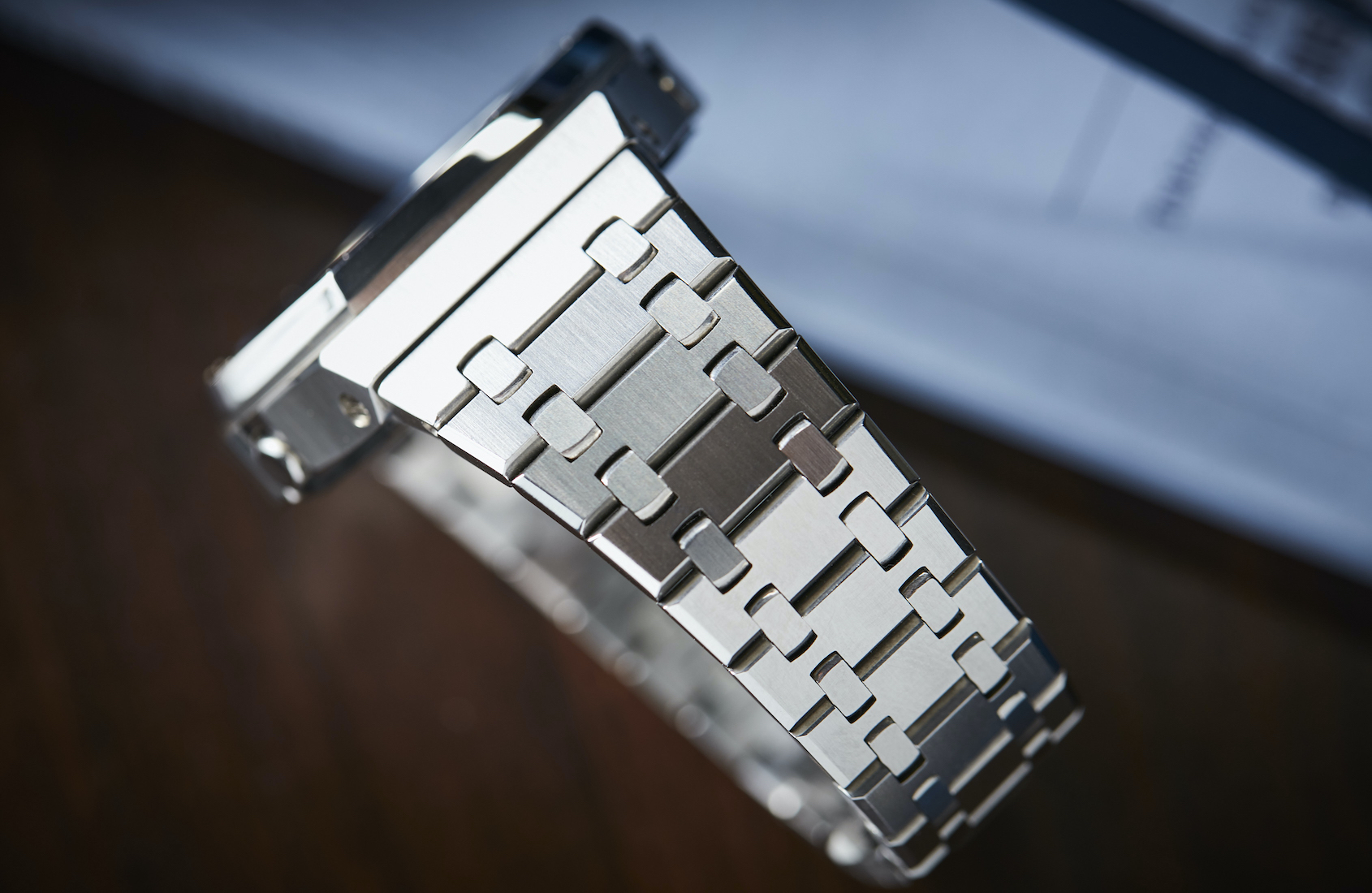 It’s a thing of beauty to look at and to hold, but here’s the catch: it’s not as comfortable as other bracelets that look similar. The heaviness of the steel, combined with the imperfect machining makes it a little unbalanced on the wrist, as well as being liable to enthusiastically relieve you of wrist hair. The way the bracelet is structured also leaves very little room for lateral flexion to accommodate your wrist as you go about your day, which makes it something you are constantly aware of as you wear it. 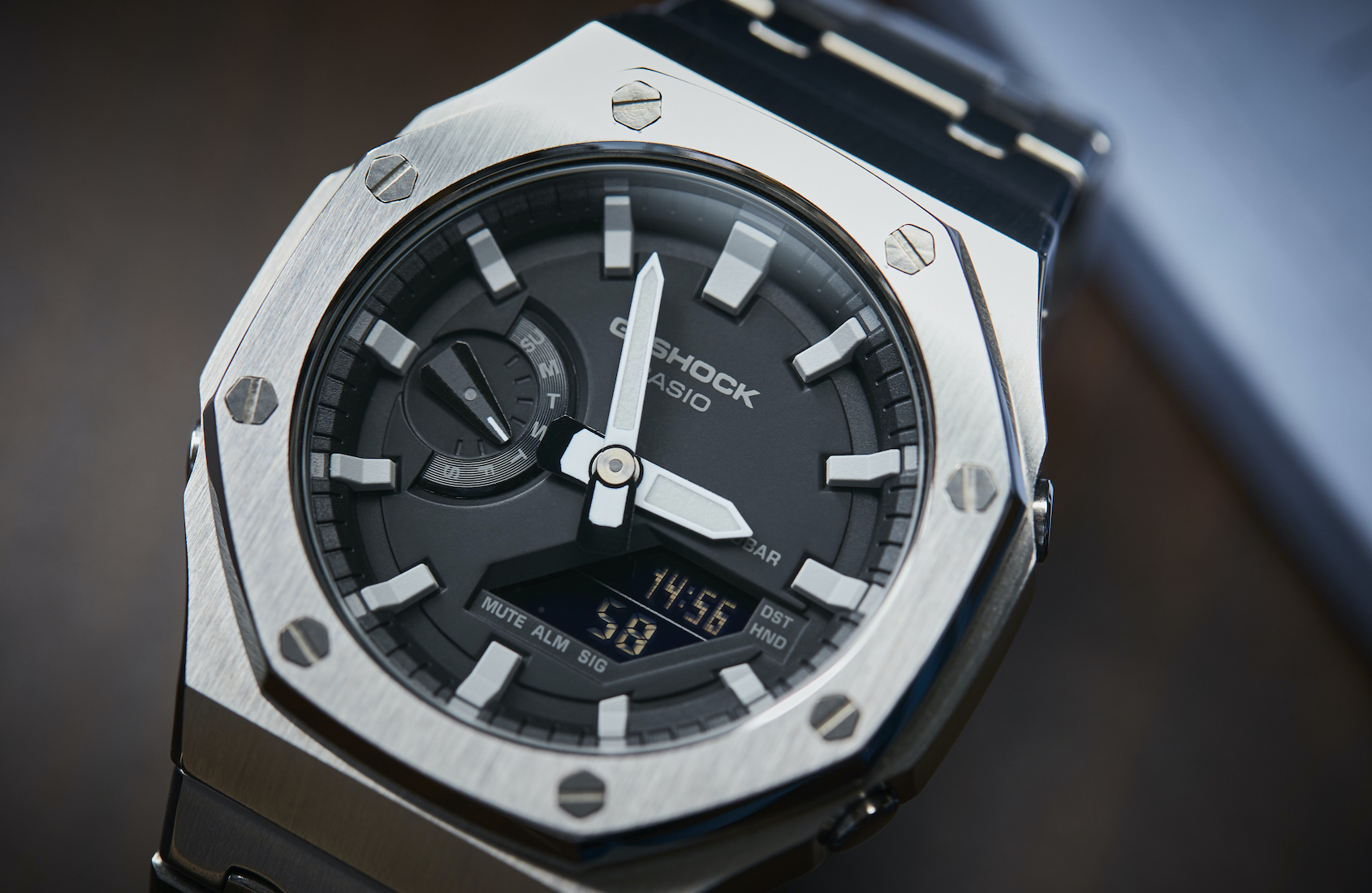 The other disappointing feature was the lack of micro adjustment, which isn’t something you would expect from a bracelet that looks like this, but is a negative that is magnified thanks to the size of the case. Rather than the slimline and compact case that the bracelet was originally designed for, the comparatively bulky case needs a bracelet or strap that sits snugly against your wrist, not loosely floating like this bracelet is prone to. 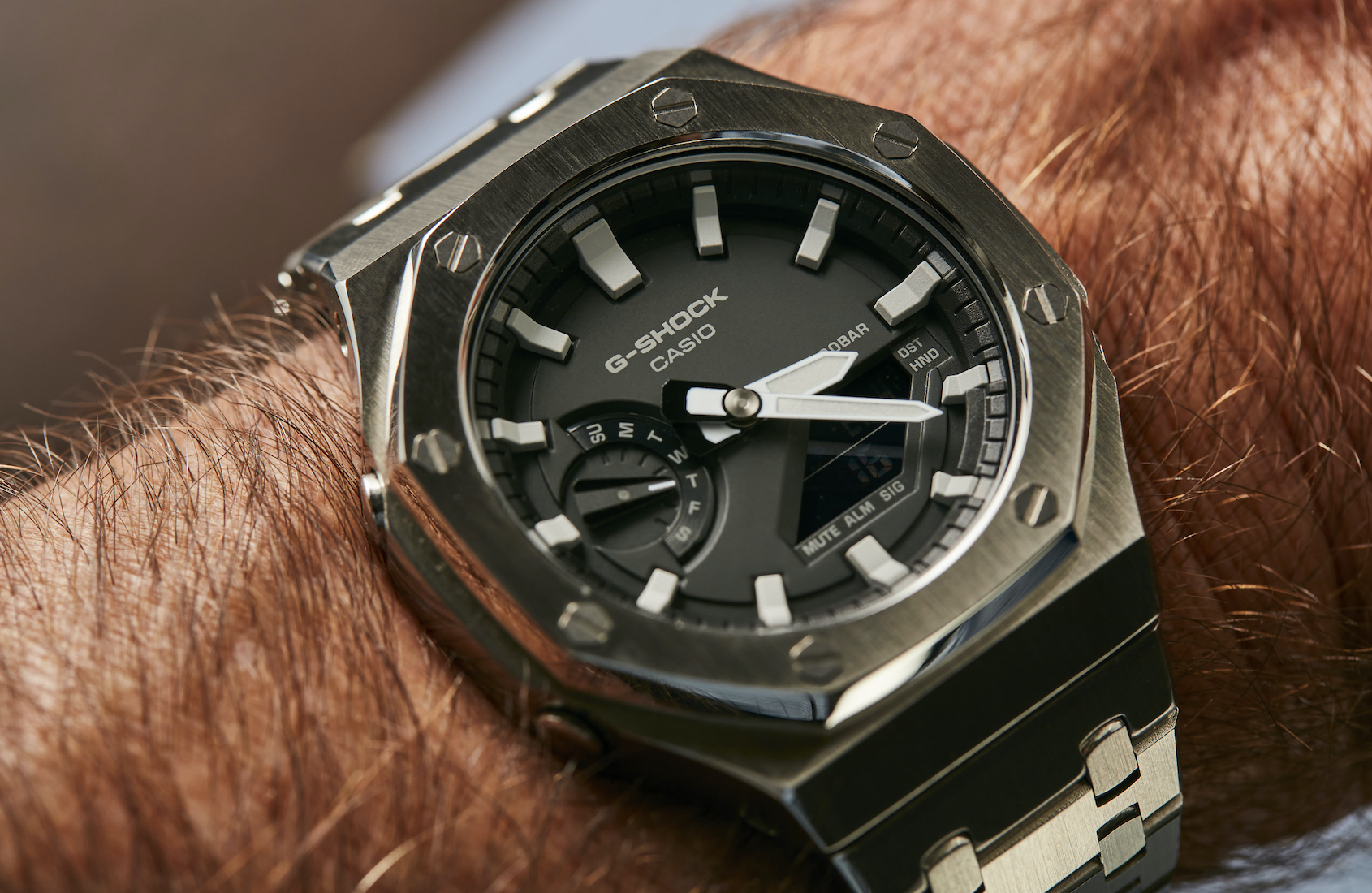 As a result, it doesn’t get as much wrist action as it might if the bracelet was more comfortable. Despite that, it’s still a fun piece to have in the collection, and is great to wear from time to time. It’s also a reminder of how far the watch community has come that the industry behind modding can even exist. The fact that collectors from all walks of life are looking to customise some of the watches in their collection is exciting, and speaks to a world on the other side of steel-sports watches hysteria where individual personality is prioritised over being in the cool crowd. 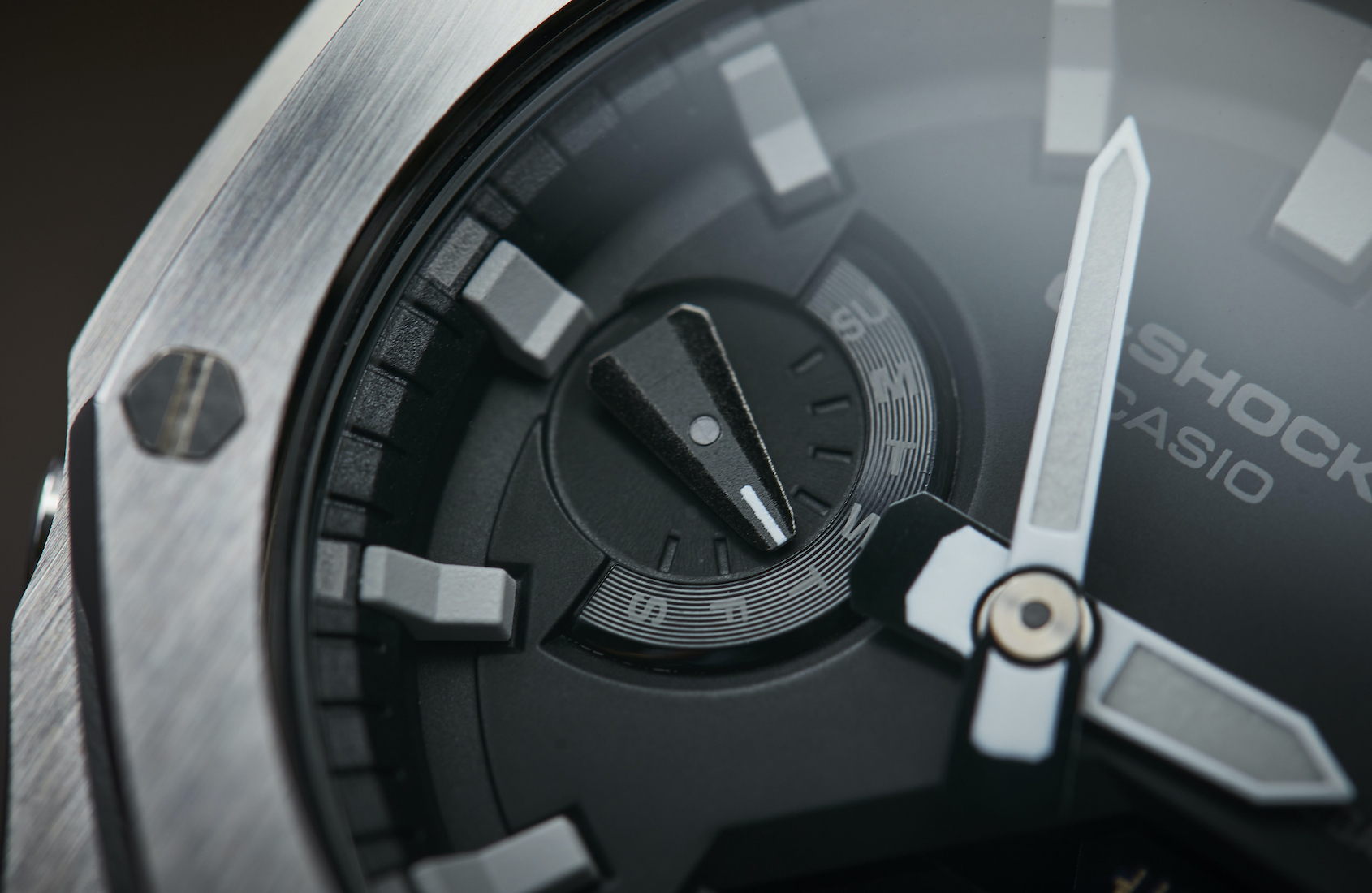 The increasing popularity of customisation and modification may even reach a point where the snake begins to eat its own tail and watches built to look like other watches become the best known versions of that watch. Anecdotally, I heard the story of a friend who posted a photo of their desirable Rolex on Instagram and someone commented that it looked like a modified Seiko. The irony was that the Seiko mod was built using the Rolex as a reference. 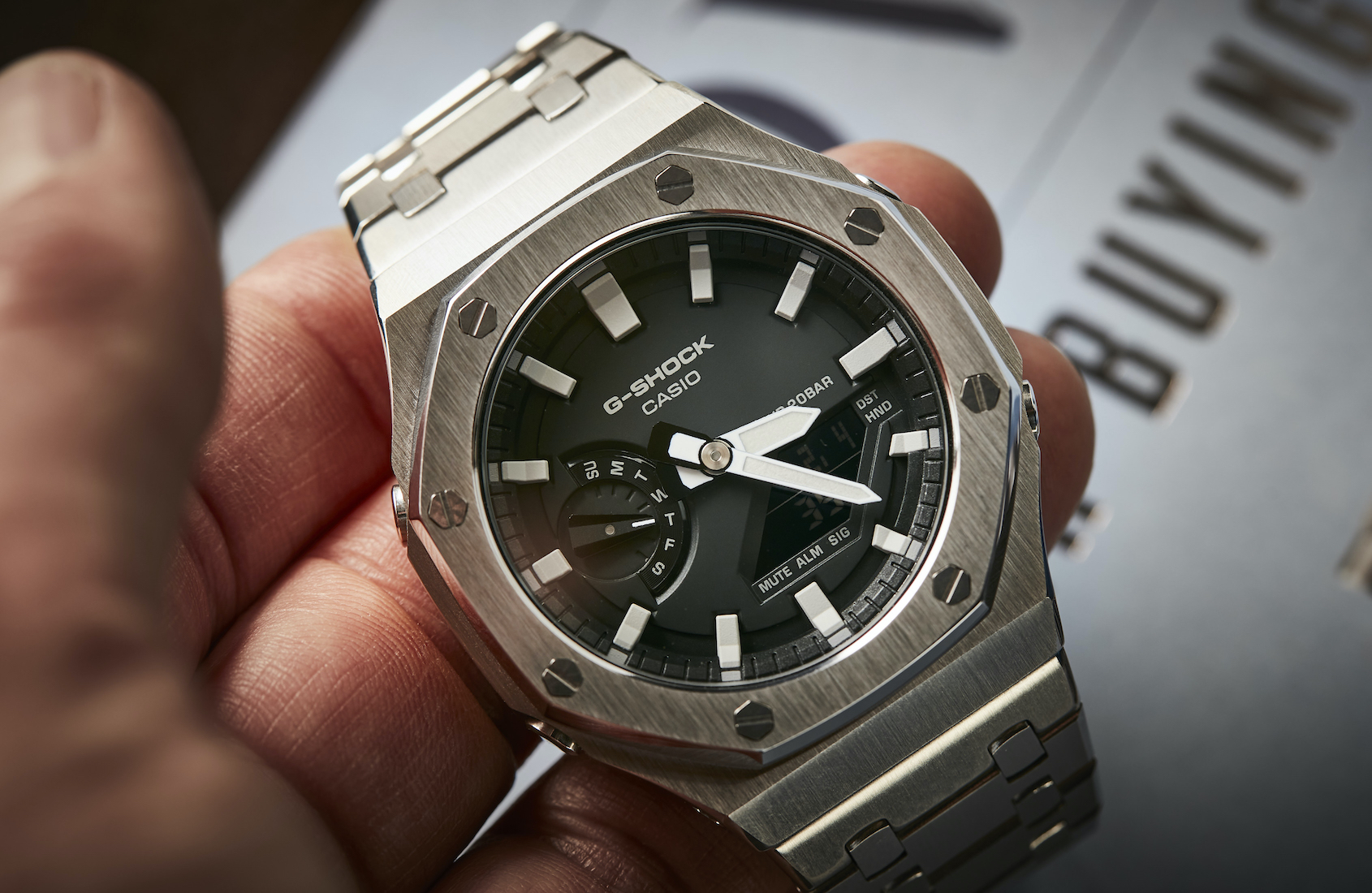 It’s an increasingly tangled web of visual impression and design inspiration that is mixing the high and low more and more. My hope is that the melange encourages people to wear and collect what they like, not simply the vogue look of the moment.