One of the more surprising watches of 2019 was Chopard’s Alpine Eagle. Based on the Swiss outfit’s St. Moritz wristwatch of the 1980s, here was an entirely new take on the luxury stainless steel sports watch with integrated bracelet. It was, and still is, an important timepiece for Chopard as it’s the watchmaker’s best attempt yet at taking it to the stalwarts of the industry who dominate the steel sports watch space.

Now, more than a year after the collection’s unveiling, Chopard has added to the Alpine Eagle family with this – the Chopard Alpine Eagle XL Chronograph. From launch, there will be three different iterations available – steel with blue dial, steel with black dial and two-tone steel and rose gold with black dial – and judging from the on-paper specs and press photos, they promise to be exciting timepieces. So, let’s take a bit of a closer look. 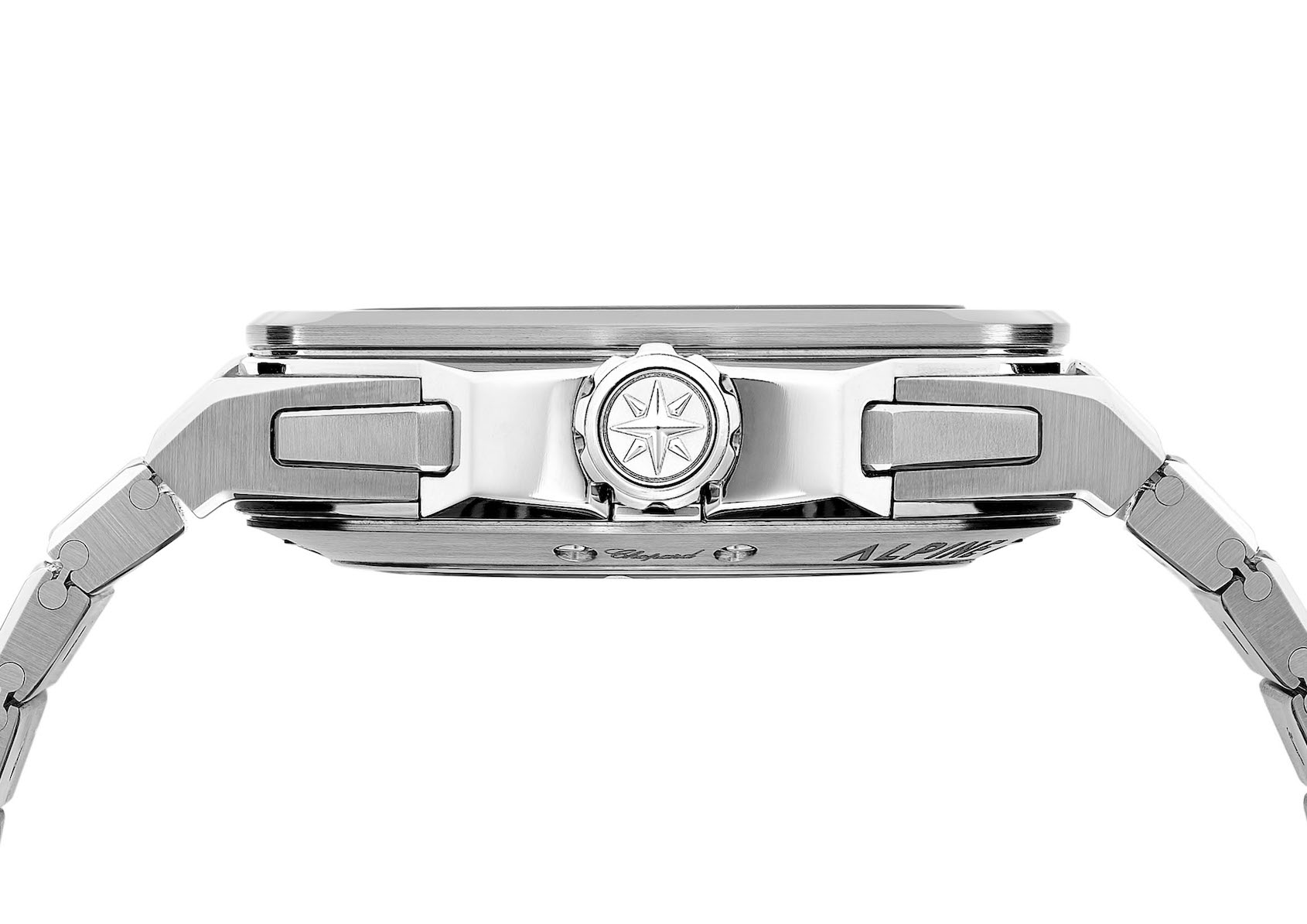 While the overall case shape and design language remains the same, these new chronos have swelled in size considerably, now measuring 44mm across and 13.4mm thick. Water resistance remains rated at a versatile 100 metres, which is impressive given the chronograph pushers are not of the screw-down variety, but rather slender pillars that smartly integrate with the right side of the case. As was the way with the three-hander Alpine Eagles, the chronos utilise the watchmaker’s patented Lucent Steel A223, an ethically and environmentally sourced metal that has a real, inimitable iridescent quality. Chopard is also keen to point out that the rose gold used in the two-tone model has also been ethically sourced. The cases have been sandwiched with sapphire crystal, so wearers can admire the mechanical innards of the watches, as well as their rapturous dials. 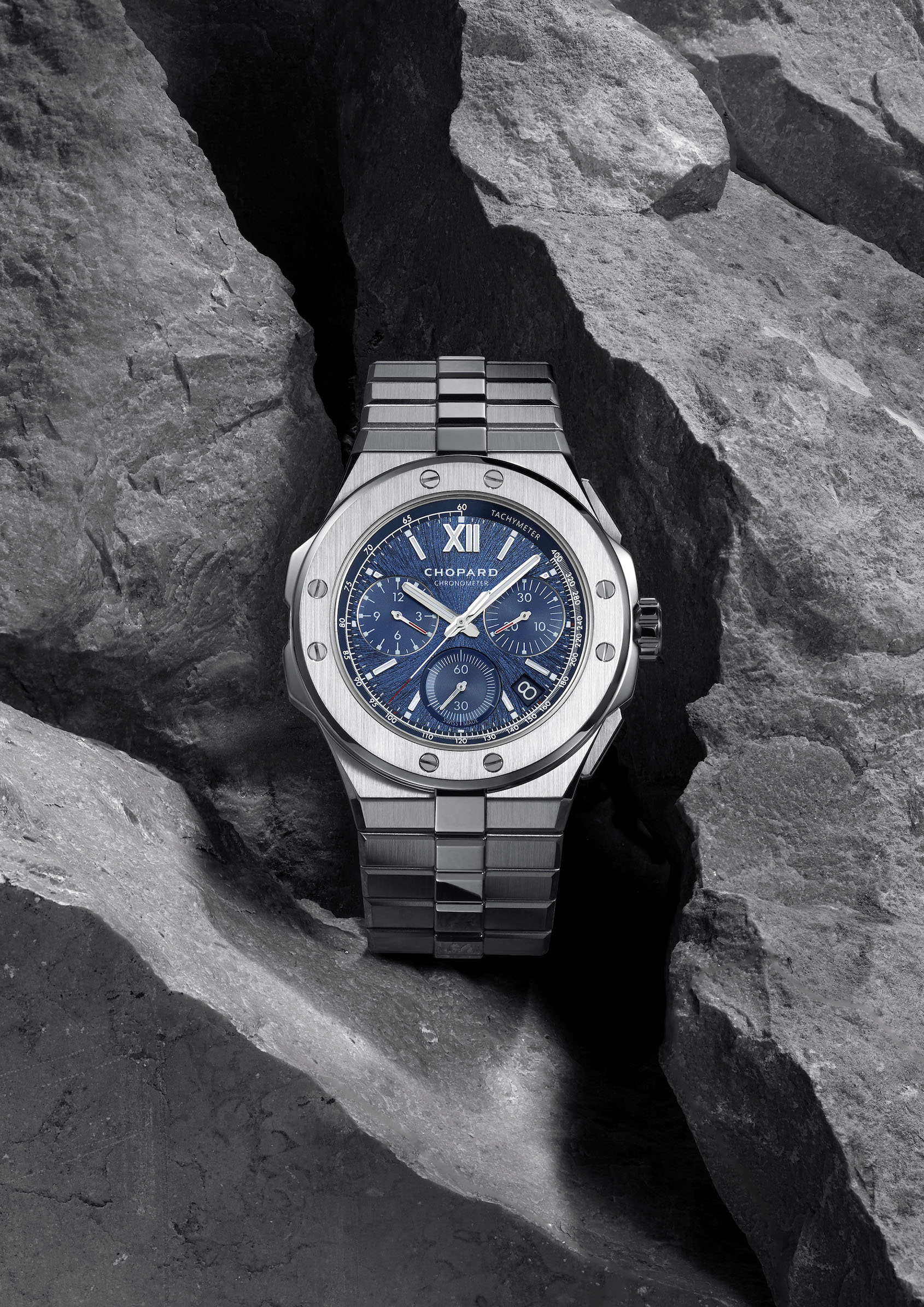 From its release, one of the best things about the Alpine Eagle was its dial. The heavily textured, concentric galvanic finish makes it, to our eyes at least, one of the prettiest and detailed dials on sale today. For the XL chronos, as mentioned earlier, there will be two dial colours available. The first is Aletsch blue, which carries over from the three-hander. The second is what Chopard are calling “Pitch Black”, an all-new colour for the moniker that, according to Chopard’s Co-President and creator of the collection, Karl-Friedrich Scheufel, is meant to mimic “the intense blackness of mountain nights when wild nature reclaims its rights, reminding us in passing how human-related night-time lighting and urbanisation disrupts the way of life of the surrounding fauna”. 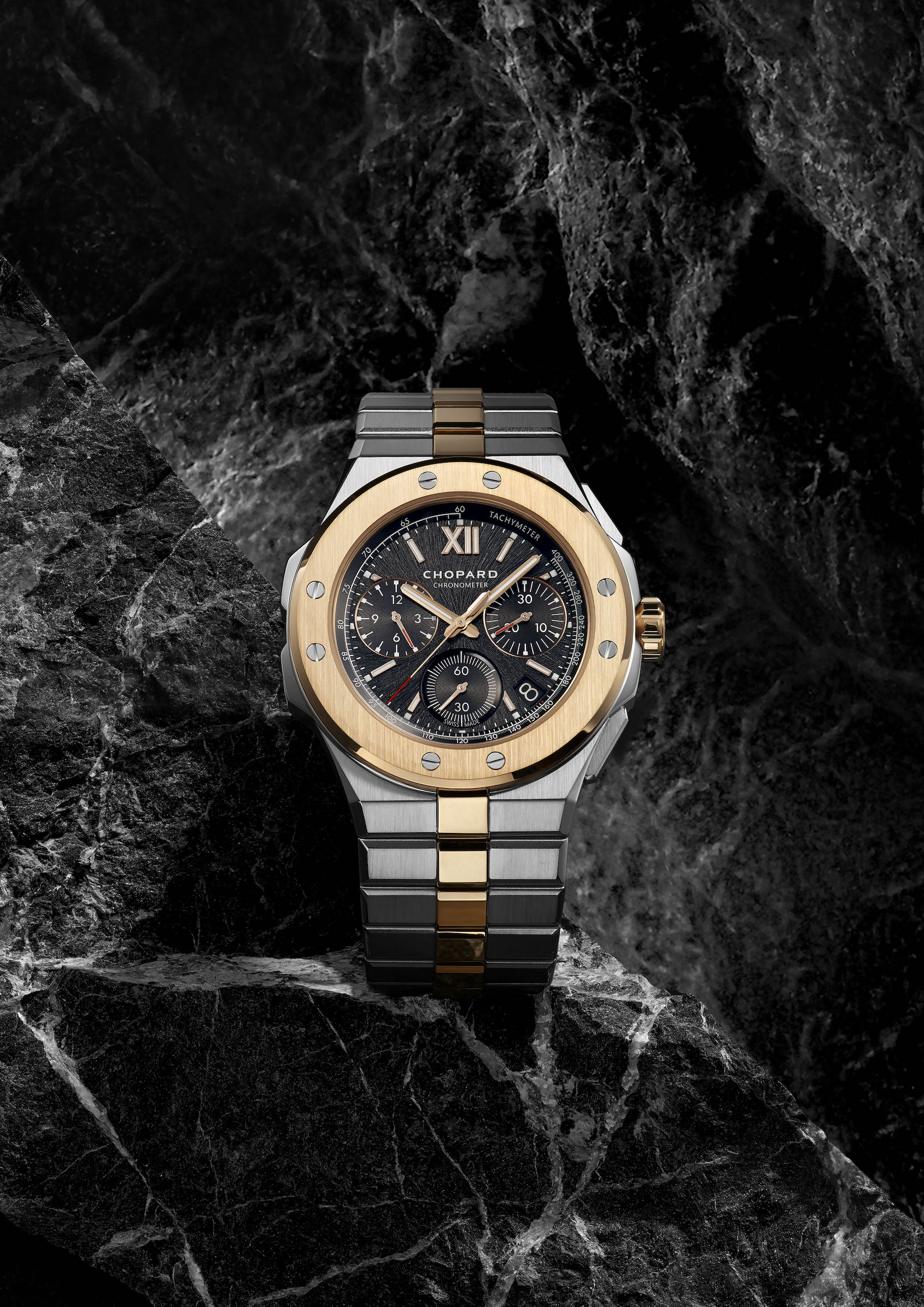 As for the chronos’ dial layout, Chopard has stuck to a tried-and-true design that sees the three sub-dials occupying the three, six and nine o’clock positions, which display a 30-minute totaliser, small seconds and a 12-hour totaliser, respectively. Rather annoyingly, Chopard has decided to locate the date aperture at 4.30 (a big pet peeve of ours) but, hey, it is a useful piece of information to have nonetheless. There’s also an inwardly concaved tachymeter scale that lines the edge of the dial, and that certainly appears to aid in the watch’s sporty aesthetic. 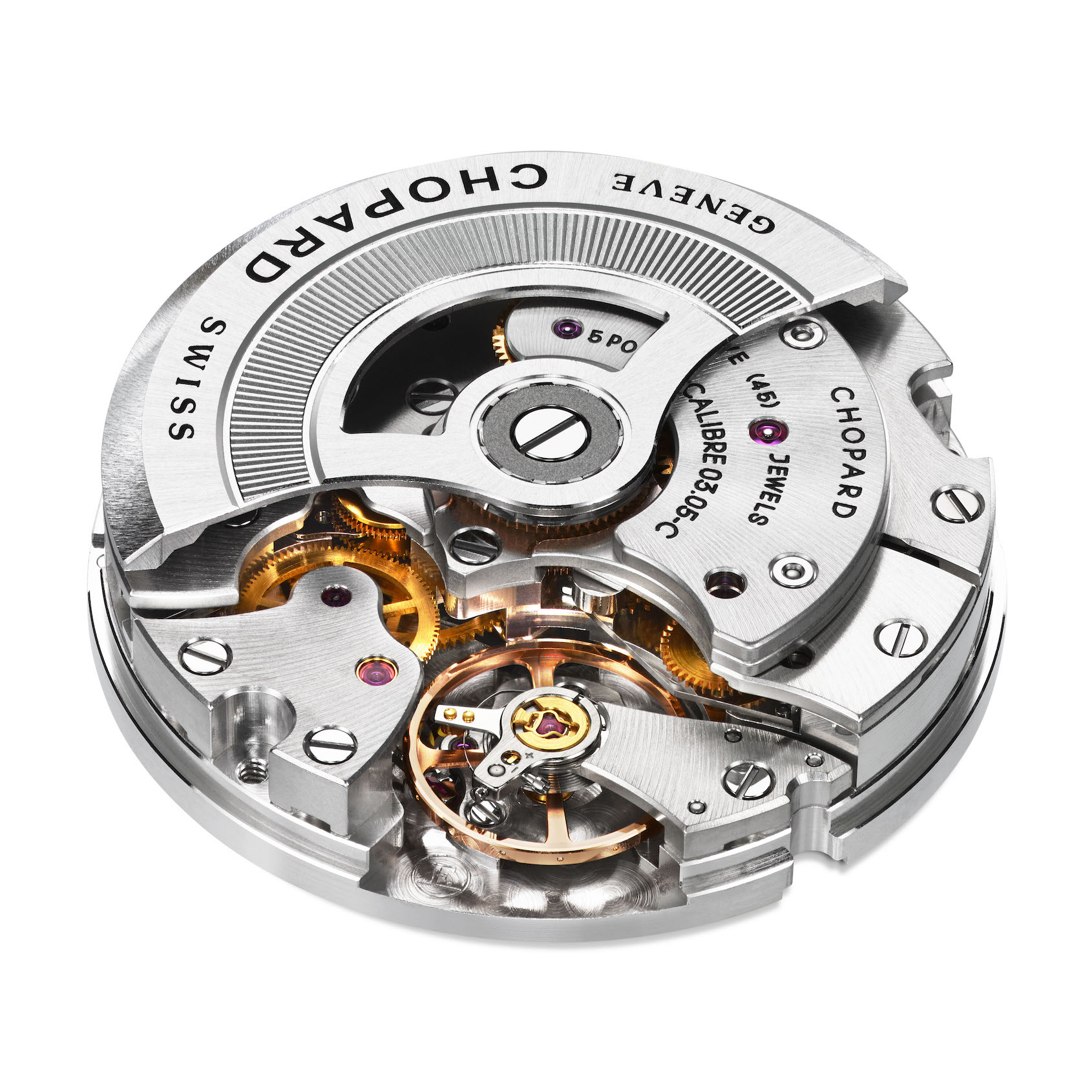 Powering the Alpine Eagle Chronograph XL models is Calibre Chopard 03.05-C. This self-winding in-house movement is an impressive feat of horology, and has no less than four patents attached to it. Features include chronometer certification, a flyback chronograph complication with column wheel, 45 jewels, 4Hz operating frequency and 60 hours of power reserve. 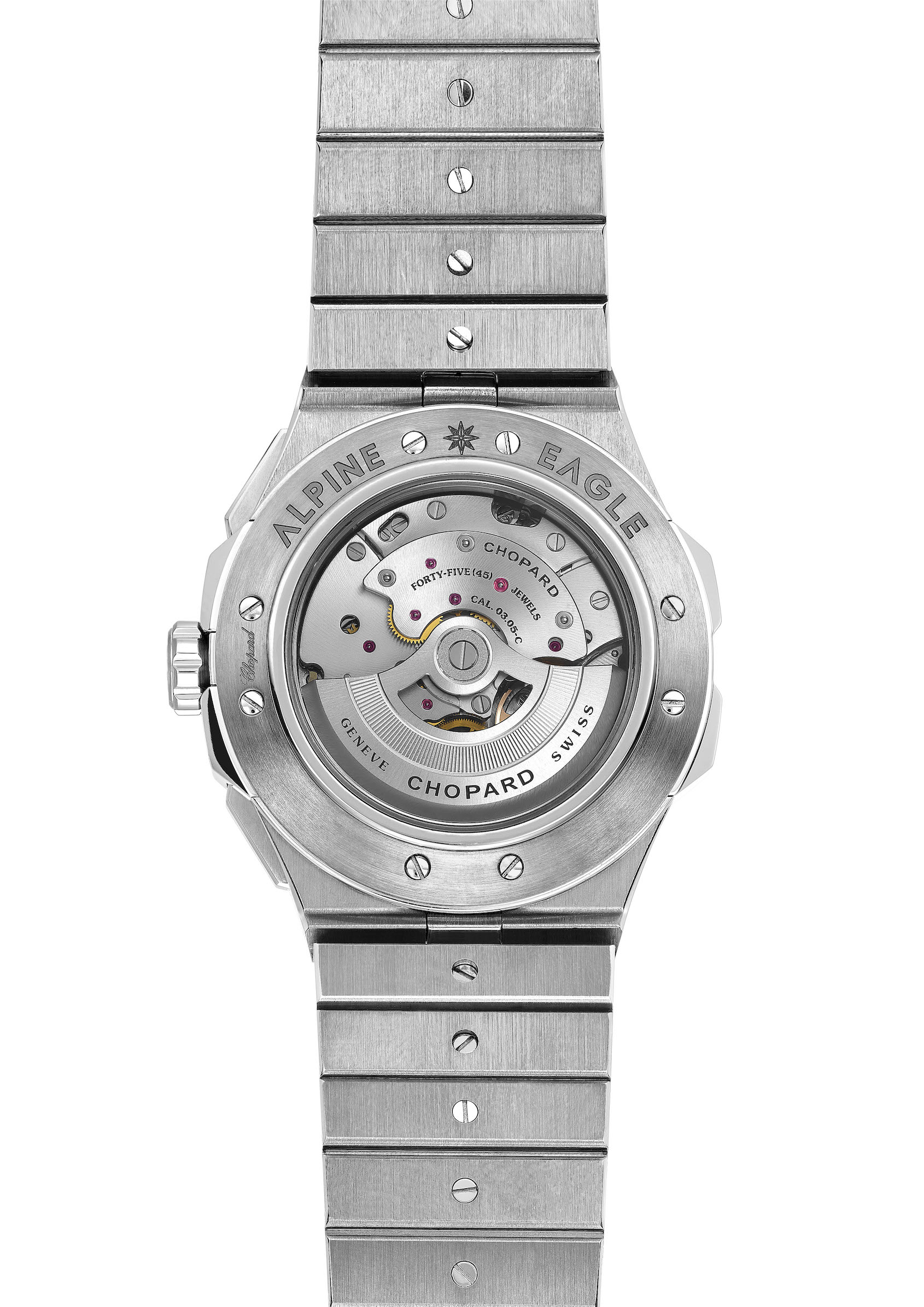 The same bracelet seen on the three-hander models of the Alpine Eagle will also be used for these new chronos, which is fine by us, as it is an exceedingly comfortable and good-looking bracelet. We especially liked the way it tapered inwardly from the lugs, and the blend of finishing that sees the outer links vertically brushed, and the central links highly polished. 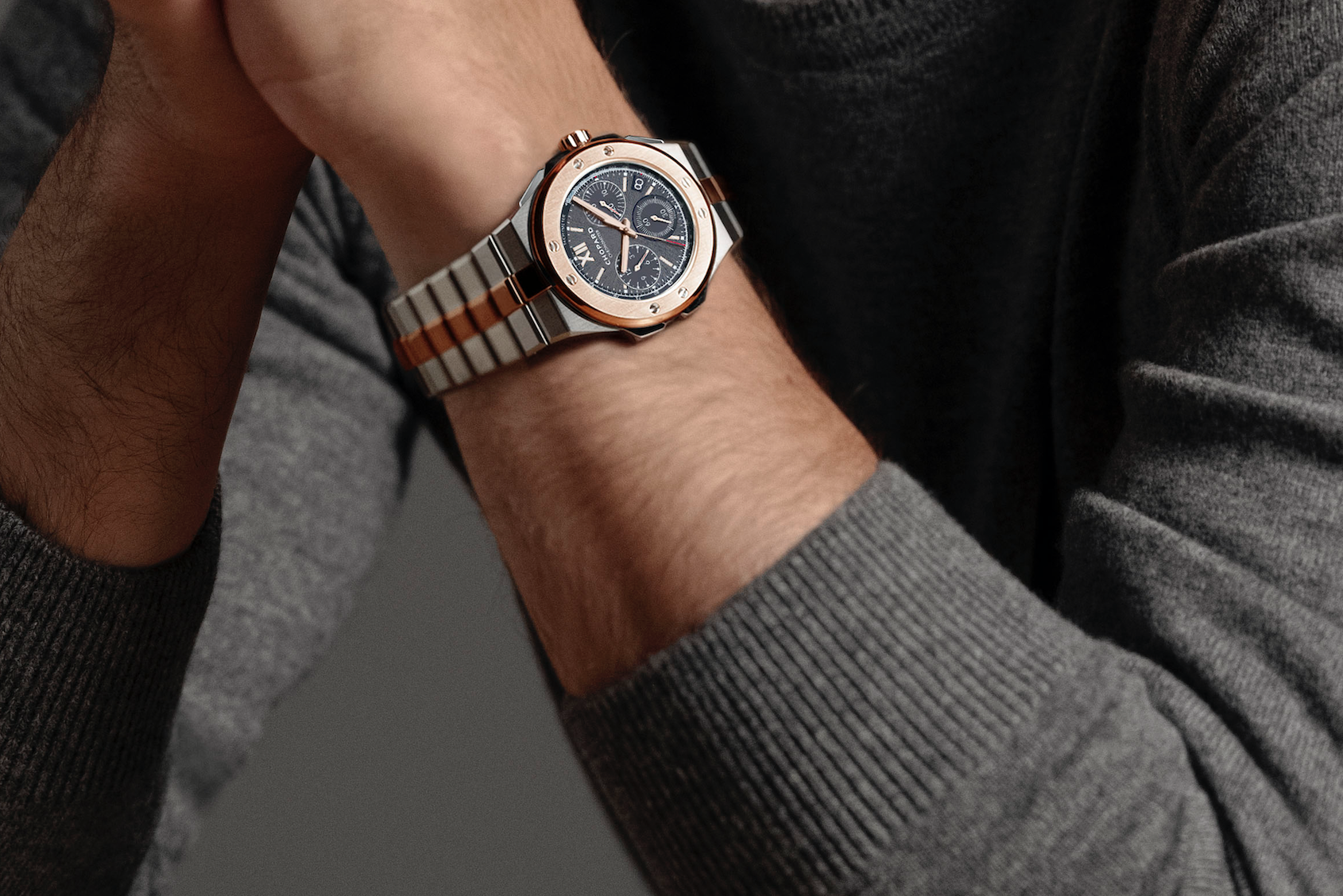 Obviously, we’ll have to wait until we have the new Chopard Alpine Eagle XL Chronograph in hand to be able to give you our definitive thoughts. But it is great to see Chopard continuing to push this new collection – it’s got a mighty amount of potential, and we’re starting to witness it.