No fauxtina, no sub 40mm case and seemingly hewn out of a three ton block of arctic granite … I am blown away by how something so big can be so refreshing. A massive chunk of sandblasted blue freshness. You can tell by my name that I might have a Nordic bias here – but my personal preference is small, vintage, with a hint of bling. Yes, everything the Linde Werdelin range is not. Still, I feel myself drawn to this big chunk of a watch, seemingly made for my demigod namesake and not for my puny wrists. 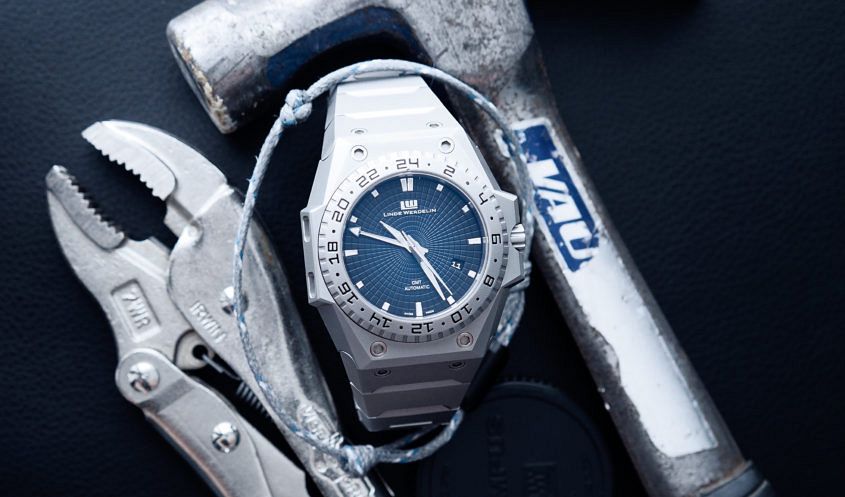 The 3 Timer follows in the shape and form of what we know and love from Linde Werdelin. The DNA is easily traceable from the first Biformeter through 3 Timers, Spidolites and the other previously released Nordic tools. The shape is unapologetically large, yet sits with surprising comfort on my wrist thanks to studied ergonomics. The rather wide bracelet or integrated rubber band gives it the vibe of other chunky tools we know from the likes of Hublot but with an identity all of its own. Polarising? Who cares! To succeed in the unrelenting metamorphosis of the 2020 retail environment you need to carve out your own niche in horology. And LW has done just that. 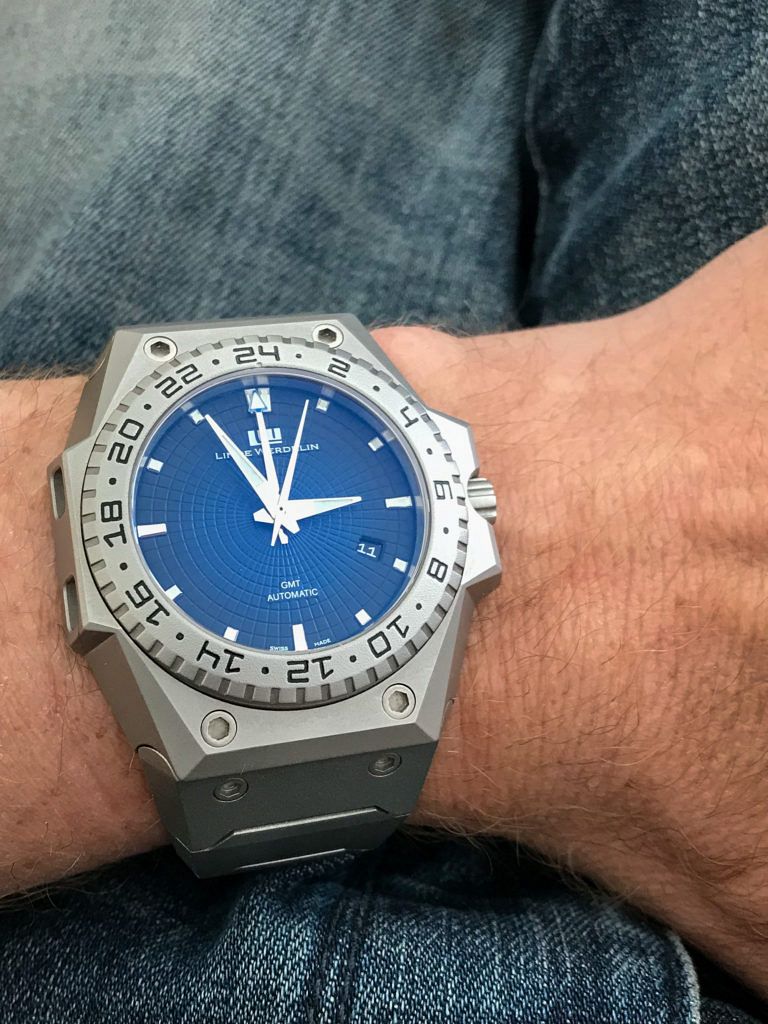 Oversized comfort, is that a term? I was expecting this with one of Linde Werdelin’s wide and soft rubber straps, but this is an entirely different proposition. It’s the first time I’ve seen an LW on an integrated bracelet, the sports watch category du jour. It has the sleek look of an armoured cuff for something predatory and extraterrestrial. 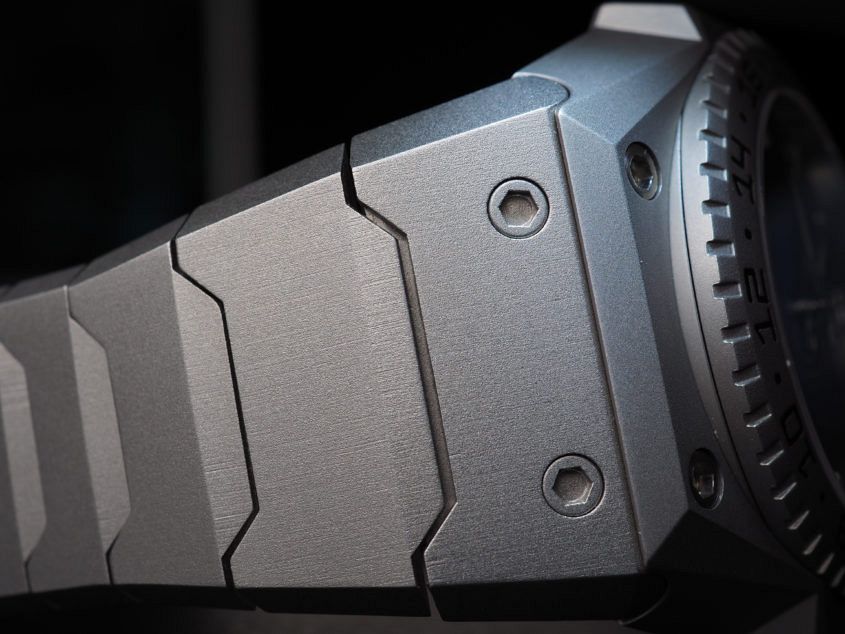 It is comprised of broad single links in sandblasted steel and it has a silky touch in the hand, somewhat at odds with its weapons-grade look. And then you click it on. If you turn it around you notice the intricate design. There is a flat middle link connecting the shell-like single top links, which allows the bracelet more give than anticipated. Rotating around to reveal the dial, the dark fumé dial is capped by a sapphire crystal of only 31mm, which means it shrinks on the wrist. And how does the bracelet feel in terms of its tactility? 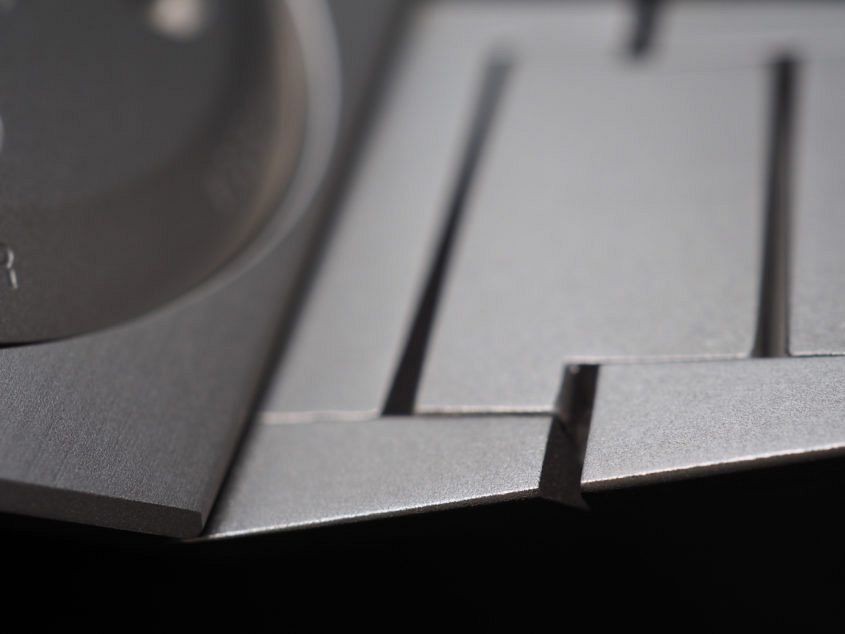 Like being embraced by a soft touch tank track. The single top-link with underlying connecting flat links draped perfectly around my 7-inch wrist. The butterfly clasp with the LW logo is superbly engineered, and the lack of micro adjustment is saved by the seven removable links being quite short, and this is more of a sports watch than a diver – so no need for a dive suit extension clasp.

The design language of the case itself is pure Linde Werdelin. The Biformeter 3 Timer was launched in 2009 in its first form, an evolution of the first models, the Biformeter Elemental and Biformeter 2 Timer. The main difference here is the contrast that the dark blue/black fumé creates in play with the soft grey look of the steel, along with some of the polished details in the dial. This is actually my first hands-on with a Linde Werdelin, and the hewn-from-granite look to the watch is even more prevalent with the soft uniform colour. 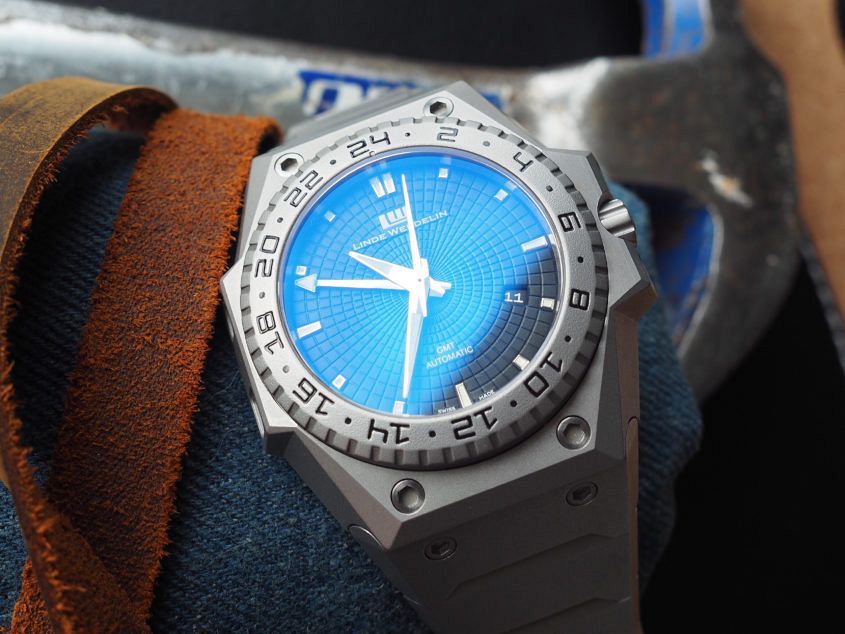 The superb casework is what we’ve come to expect from LW. The only bevelled and faceted comparison here is perhaps the Orlinski series for Hublot, to which this would be a Nordic understated and quiet uncle. But quiet and soft to the touch as it may be, the main vibe I am getting here is one of stealth and a tank-like build quality. 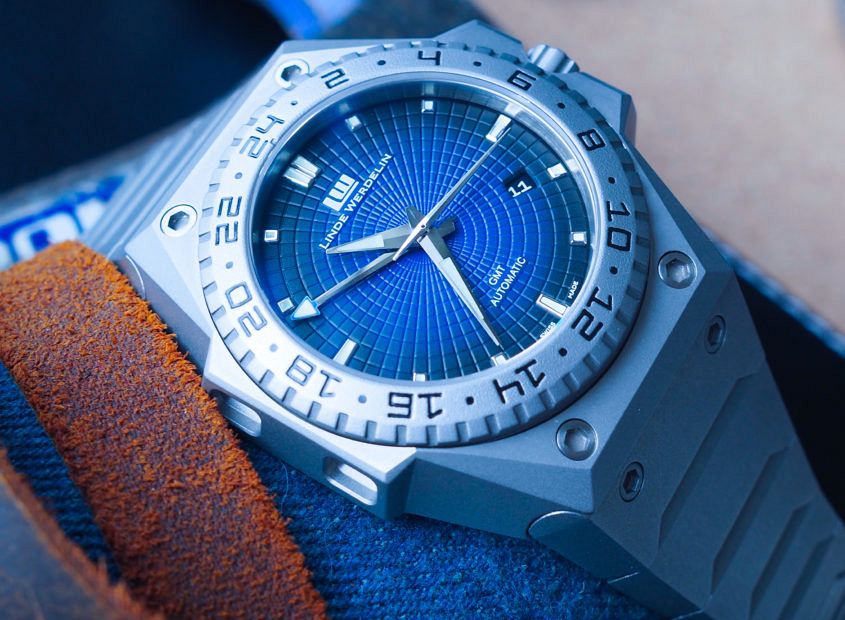 I am also finding great enjoyment in the distinctive bracelet and strap connection point at the case – made via twin Allen bolts recessed into the lug section, though no Linde Werdelin has lugs per se, instead an edge onto which both straps sit flush and thoroughly bolted, in keeping with the solidity of the timepiece. What I hadn’t noticed before fondling this velvet-like steel case is that the design, nay engineering that goes into the LW case does encompass ergonomics in a big way. 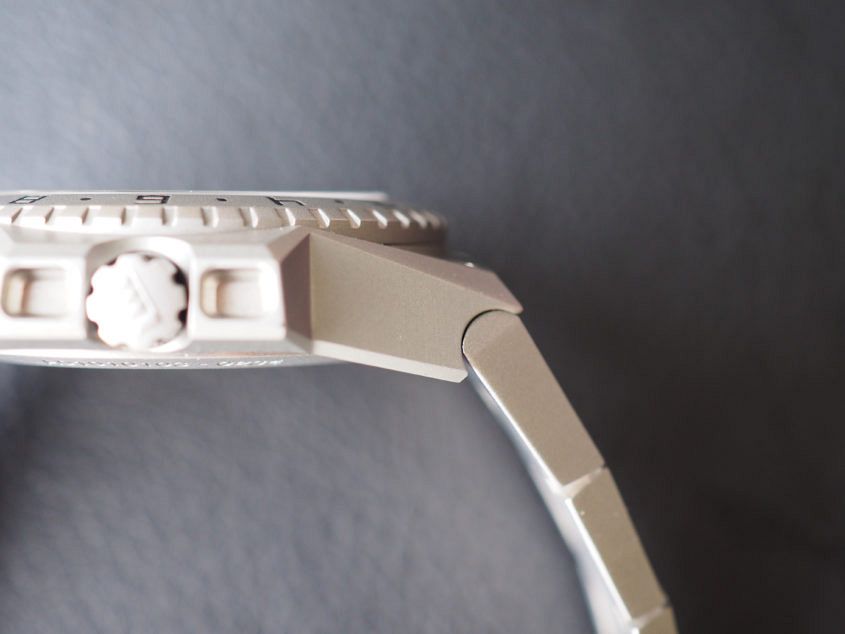 The base, which at first seems flat, has, even without conventional lugs, a design twist that makes a chunk of tool watch like this seem lithe on the wrist. You see, the lug ends of the case are downturned by a good measure; seeing it from the side making it clear that the 3 Timer has lugs a good couple of millimetres further down than the caseback, making it hug the wrist. The comfort is only underlined with the edgy and bevelled case and bracelet exhibiting great detail work. All protruding ends, corners and bracelet links have smooth edges. Don’t get me wrong, this is no svelte skin diver at 44 x 46mm, but those lugs vastly improve wearability. The 15mm thickness is cleverly disguised by the sharply sloping sides, and the thin bezel doubles up on visually shrinking it down to comfort size. Hell, I’d even wear it under a shirt cuff, enjoying the looks I’d get when the 3 Timer pops out in a meeting filled with iWatch-wearing colleagues.

The three defining features of a Linde Werdelin watch would be the chunky case with visible Allen bolt heads, the lugless, sloping case shape, and the … what am I calling them, the side protrusions? They look like a cross between chunks of metal left behind in some otherworldly foundry and a Lego take on the Nautilus. But, boy, do they fascinate me. Looking at it on the right side, they function as bona fide crown guards, and perfect ones at that — the crown is nigh on perfectly flush. 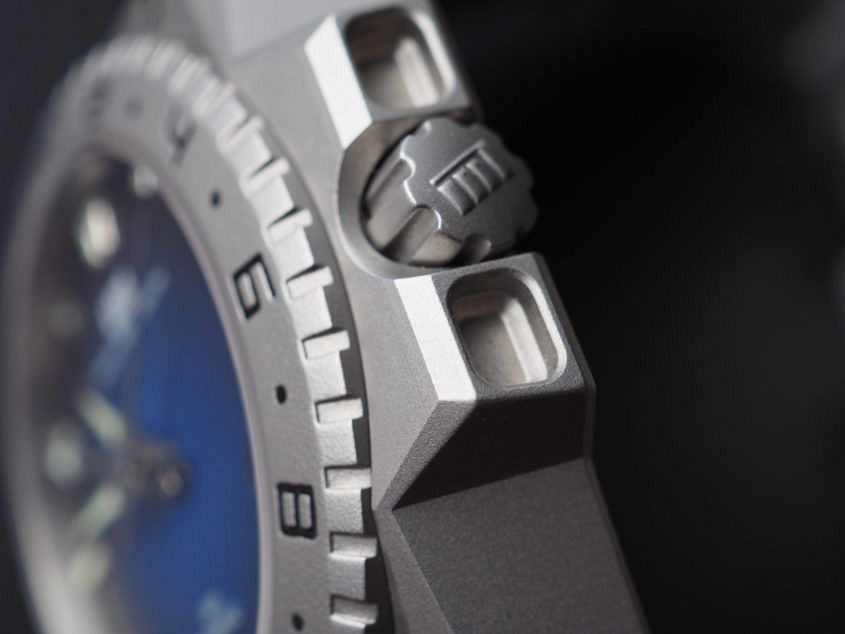 The left side gives a hint of futuristic Nautilus, but then the details emerge. They are scalloped out for lightness, though at 200grams+ with the bracelet, the 3 Timer is no flyweight, but underlines the post-2000 engineering that is Linde Werdelin’s base philosophy. This is future-proof, not retro … it could actually be from the future, for all I know.

Tool watch aesthetics and tough weapons-grade cases are nothing new to the Linde Werdelin brand, and with this monochrome and subdued (well, in a big, chunky, sharp-angled way) look, what about the dial? Here’s the twist, they have gone down a different and more colourful path and that’s the reason I’ve left it for last. As you can tell from the images, it grabs your attention to such a degree that I almost had to tape it up to analyse the case and bracelet, no kidding. 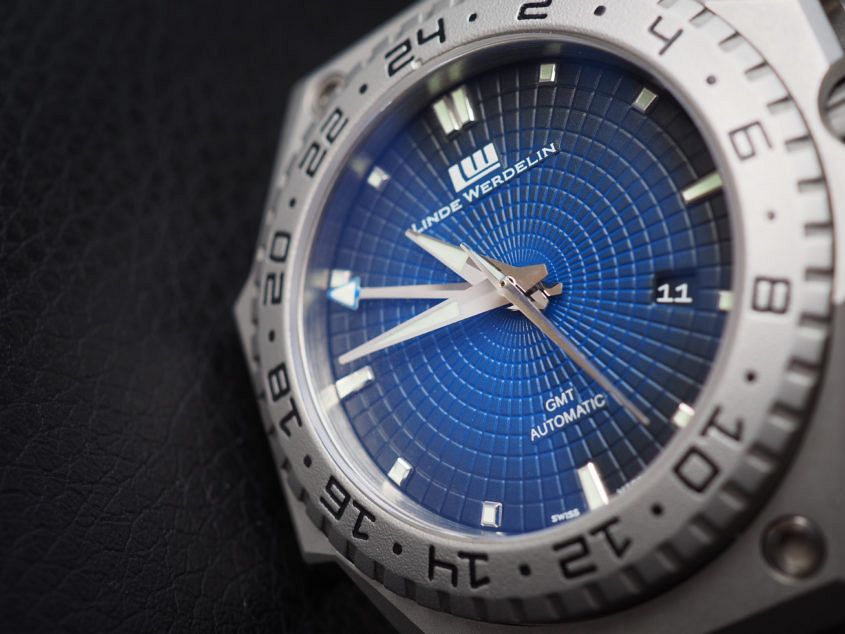 The inspiration comes from the depths of the North Sea – the stretch of cold ocean spanning the length of Norway from Svalbard and the Arctic Circle down to the northernmost edges of Denmark and the UK. The chilly depths are apparent when gazing into the fumé dial – this finish being a first for LW and it may be the only nostalgic element they have ever produced. But nostalgic in the sense that it evokes the deep North Sea – and that three-dimensional darkness is the perfect counterpoint to the monochrome grey soft touch of the case. I’m trying not to play my Norwegian card here, but I get it. Yesterday I stopped my bike by the fjord here outside Oslo and had a dip in what is an extension of the North Sea – a clear deep blue depth that makes for a cooling swim even in the 27-degree summer heat. 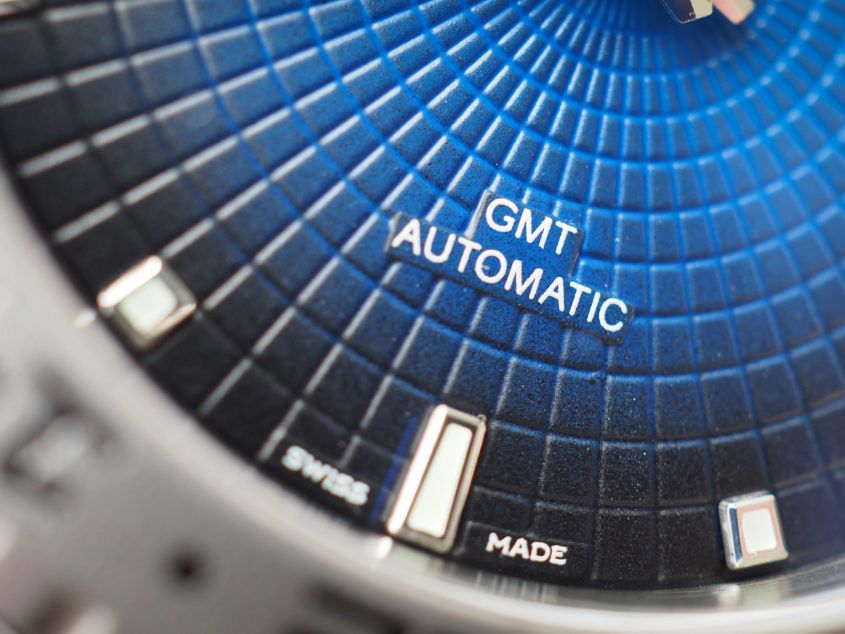 The fumé or degradé effect is one of the more popular dial treatments of the moment, and lends an extra depth to the dial, here emphasised by the intricate circular geometric pattern of the dial structure. The applied indices are polished and filled with Super-LumiNova, along with sharp-edged sword hands.

The GMT hand is clearly marked by an arrow end, edged in blue and lume filled, stretched out to the very edge of the dial, making legibility of the 24-hour bezel easy. The 3 Timer is a bona fide GMT, with the second time zone being adjusted separately one click of the crown between date and time, in one-hour increments. My only slight criticism is that the bezel, with a crisp 60-minute click and engraved sharp numerals filled with black lacquer, has got no lume. But if you stick to two time zones, you still get the picture with the Super-LumiNova lasting most of the night. The same futuristic font is evident in the discreet date window at 4, maybe disturbing for some, but for me a necessity in conjunction with the GMT function. 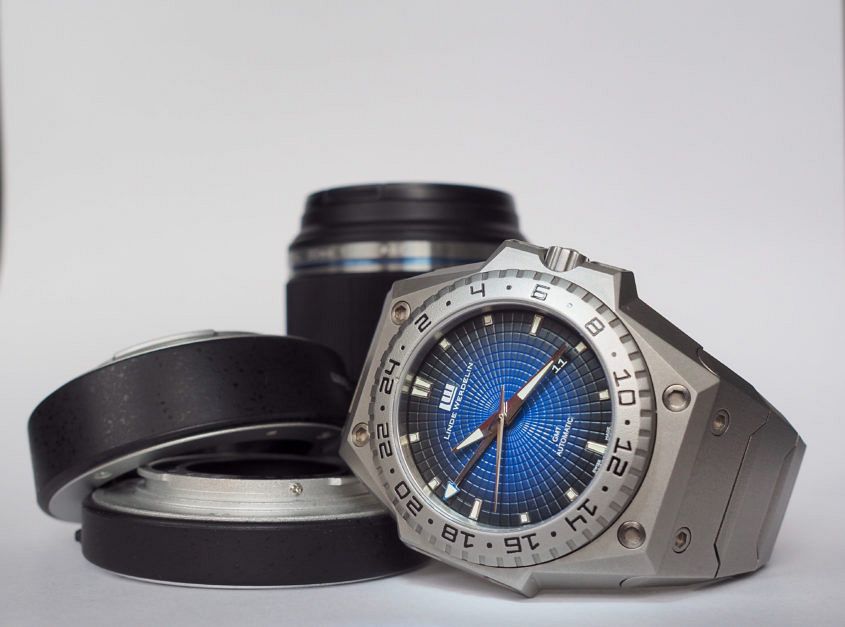 Under the minimalist, ergonomically sunken caseback lies the ubiquitous ETA 2893-2 GMT movement we all know and love, a tough workhorse with a middling 45-hour power reserve, well up to the task of powering this adventure-proof chunk of a watch.

I’ll be happy to admit it, I’m not an in-house fanatic – even if that is the way we are heading. We don’t need to rewind that far back to see some of the all-time greats like the Daytona being driven by ebauches and full movements by second and third-party manufacturers. A movement is sometimes a work of art, but it’s still an engine – with the prerequisite task of being reliable, and for me that is especially important in a watch with an adventure preset. Packed inside Gore-Tex and wool in -20C halfway up a mountain, I wouldn’t necessarily put my faith in the two-year-old history of an in-house 167-part movement.

Wearing the 3 Timer Nord is like spending time with that mate, the insouciant one who’s into extreme skiing and mountain climbing, bearded with a perennial tan – always pushing you to join him.

In this case I want to.