Bulgari has, for more than a century, been regarded as one of the finest luxury jewellery makers on this blue marble we call earth. Their expertise, attention to detail, passion and visionary design has resulted in some of the most stunning pieces of jewellery and objet d’art imaginable. As such, throughout the 20th century, the Italian firm’s creations were sought after and worn by royals, dignitaries, celebrities … basically, if you had wealth, power, notoriety or fame, you wore Bulgari jewellery. 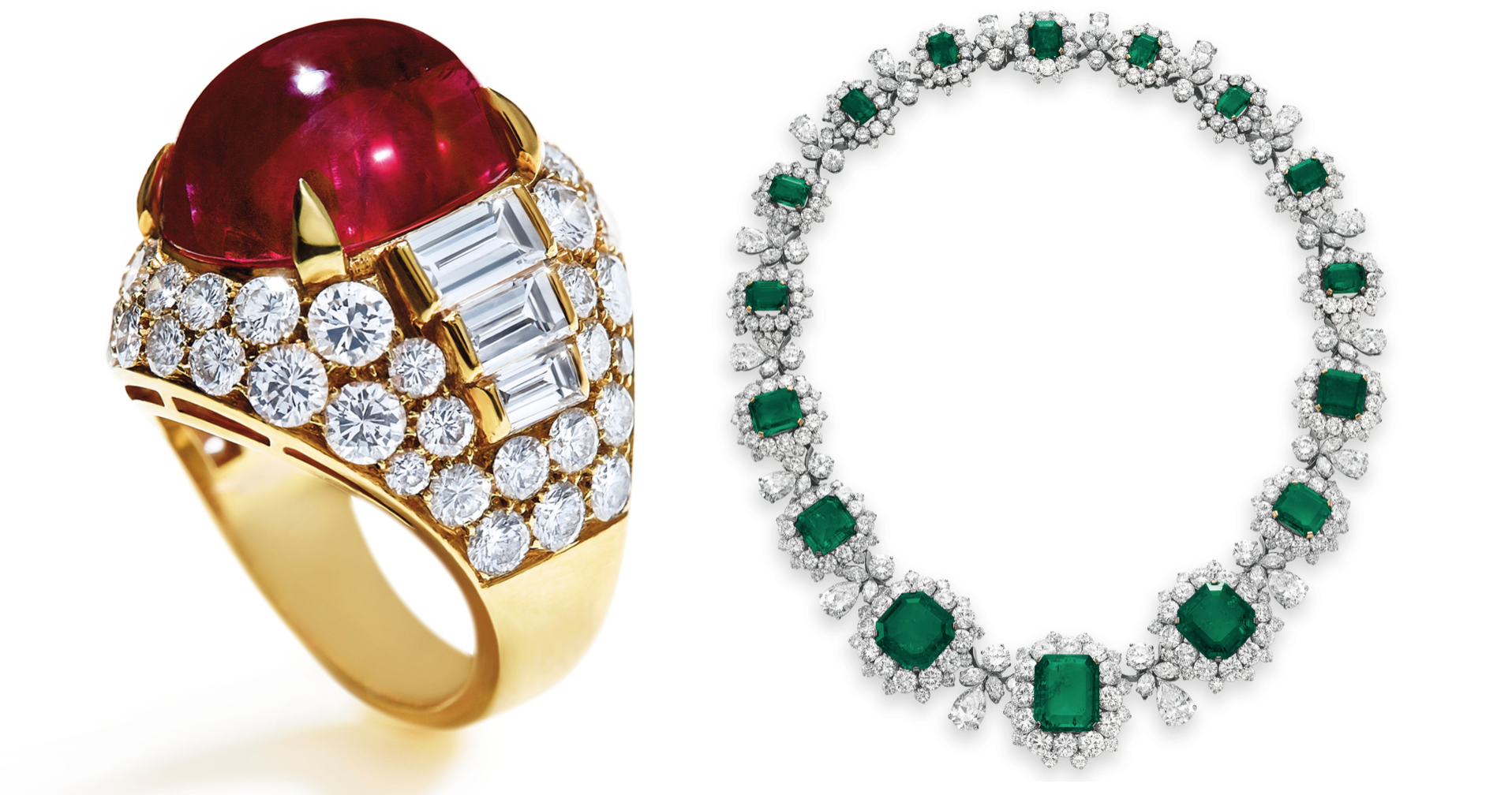 Then, at the turn of last century, Bulgari decided to try its hand at another discipline contiguous to that of luxury jewellery making – haute horology. They famously purchased Gérald Genta watches in 2000, and then went about honing their craft. And, within the first decade-and-a-half, we started to bear witness to the outfit’s high-end, in-house timekeeping creations. Watches like the revelatory Octo Finissimo Tourbillon and its manufacture Calibre BVL 268 (which broke the world record for the slimmest tourbillon movement ever created at just 1.95mm thick) were unveiled, and watch enthusiasts around the world started to pay attention. Since then, Bulgari has gone from strength to strength at the very top-end of watchmaking, and it has been truly exciting to see. 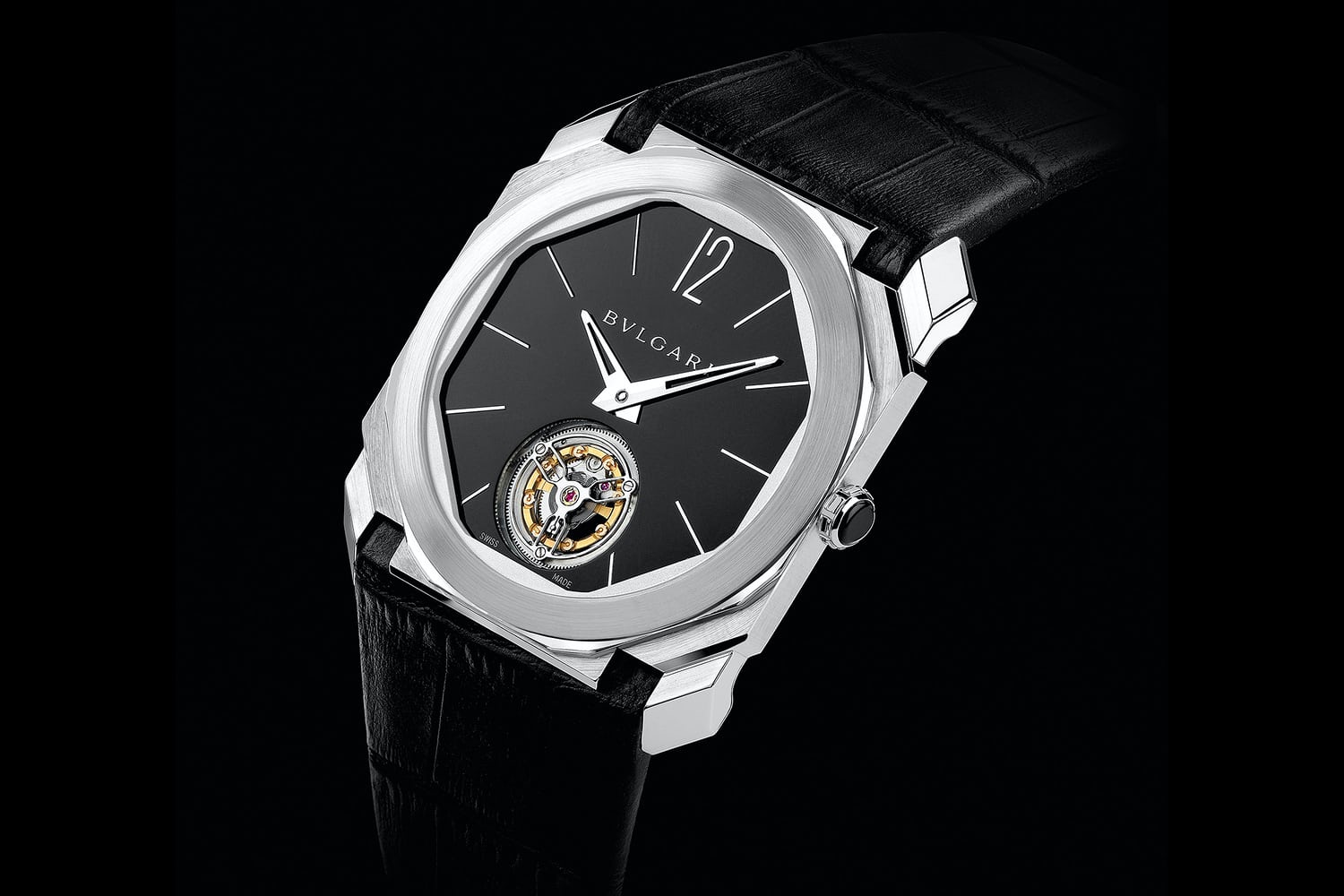 What is particularly brilliant, though, is when Bulgari blend their almost unparalleled skill in gem-setting with their excellent in-house timepieces. Just last year, we saw the simply awe-inspiring Octo L’Originale Blue with full baguette diamonds, a drop-dead piece of pure extravagance with more than 50 carats of icy diamonds and a price tag in AUD close to $2,000,000. Now, Bulgari has somehow eclipsed that shimmering stunner with this – the Bulgari Octo Roma Tourbillon Sapphire Malachite Ref. 103231. 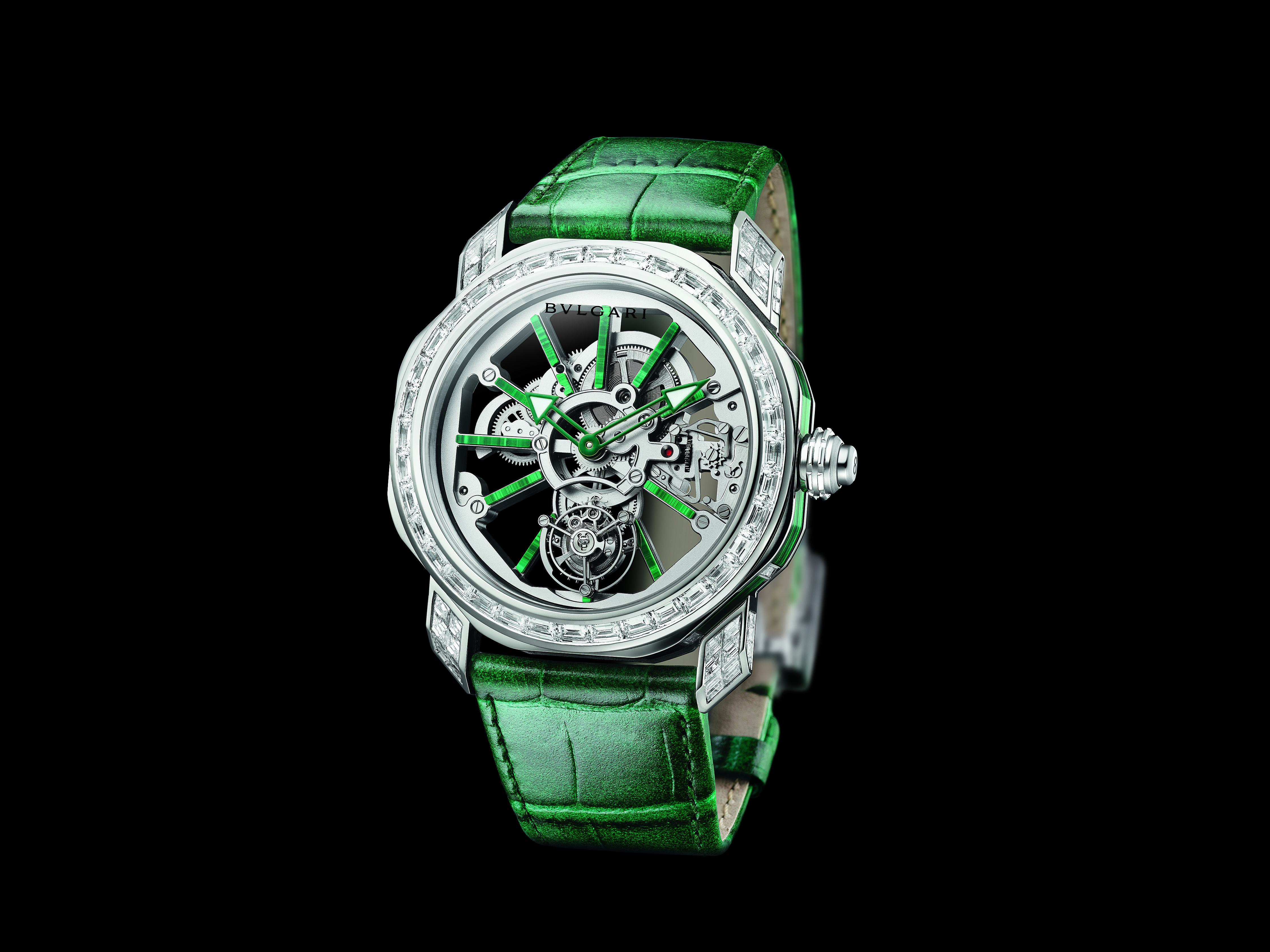 This new watch, even more than the Octo L’Originale Blue, represents the best of both the watch and jewellery-making world. 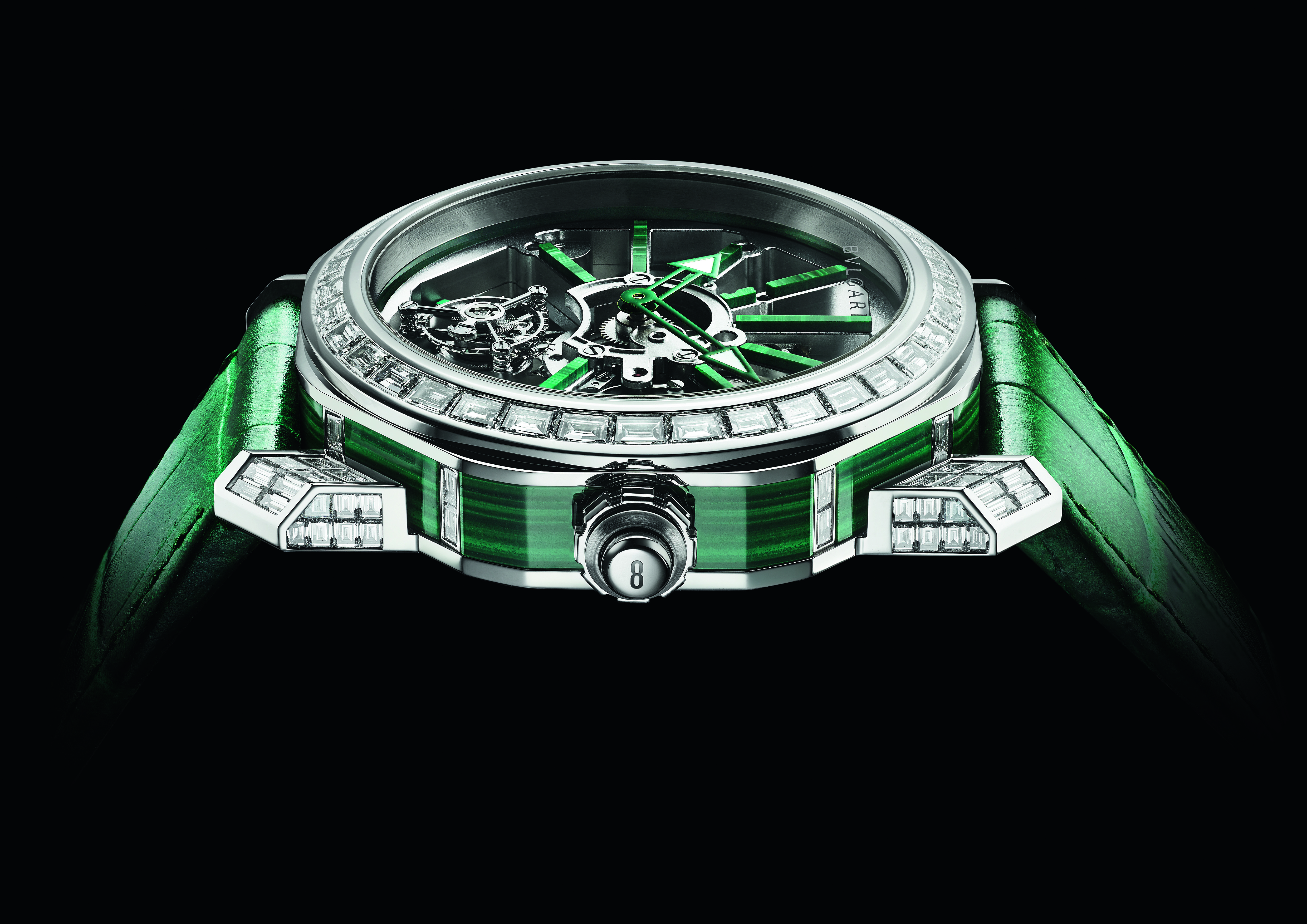 We’ll start with the jewellery. The case, which measures a substantial 44mm across, is made from a solid ingot of 950 platinum. The inimitable visage of the case is adorned with no less than 5.69 carats of diamonds, in the form of baguettes, which line the bezel, front and sides of the lugs and case sides. Then there are the rapturously laden applications of gorgeous forest green malachite, which makes up the case sides, baton-style indices and even the power reserve indicator, found on the display caseback. Take into account the solid 18k white gold buckle attached to the conforming green alligator band that’s also covered with icy pressurised pieces of carbon and, all told, the Octo Roma Tourbillon Sapphire Malachite has close to 8 carats. 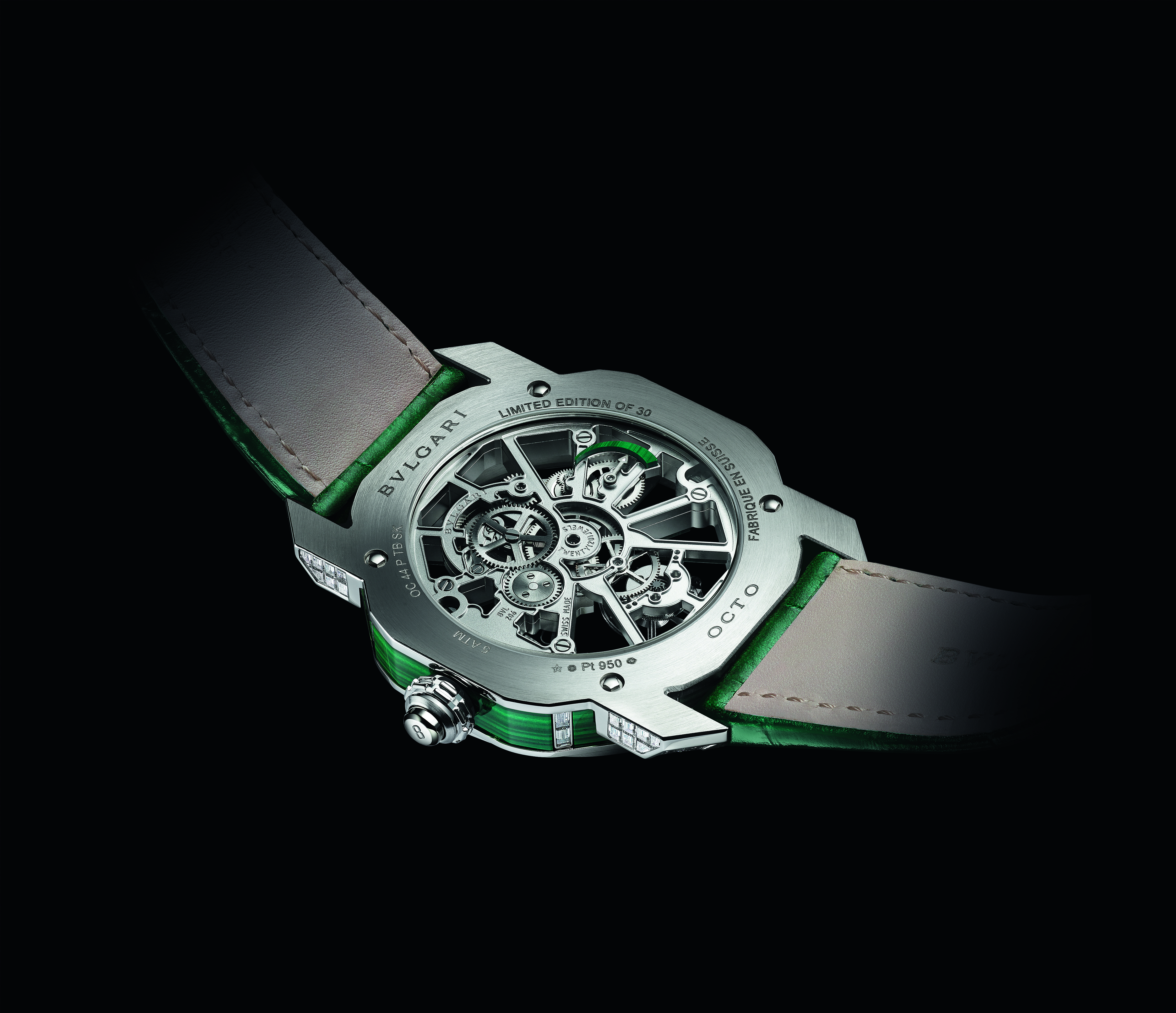 The movement is no less astonishing. Hewn from solid 18k white gold and weighing a hefty 23.6 grams, the manufacture Calibre features a manually wound flying tourbillon with aforementioned power reserve complication and, thanks to being skeletonised, it looks like it’s being suspended by some sort of precious metal interpretation of Charlotte’s Web. It’s a breathtaking show of craftsmanship, and yet another demonstration of just how good Bulgari is at making true world-class movements. 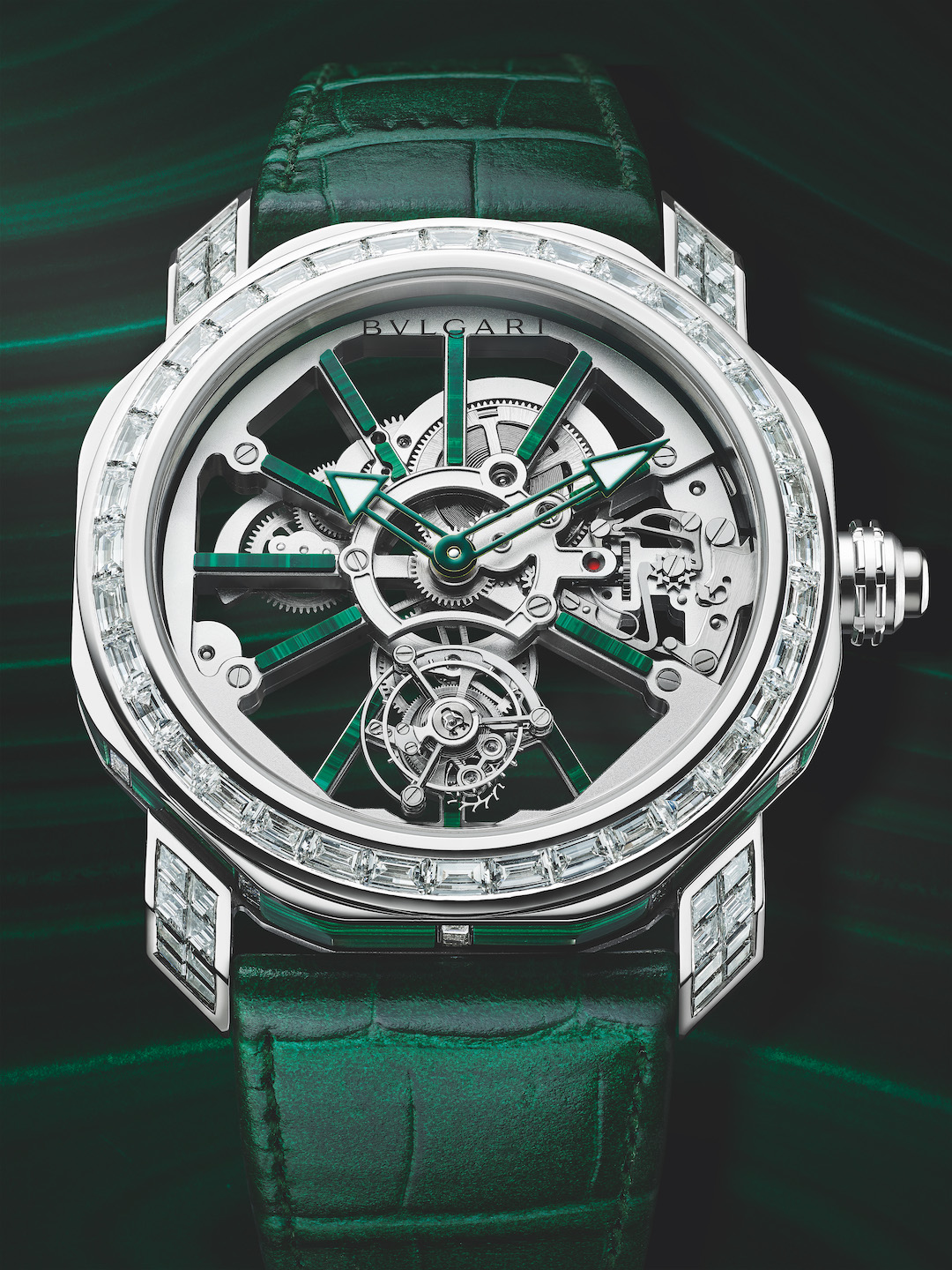 Just 30 examples of the Bulgari Octo Roma Tourbillon Sapphire Malachite Ref. 103231 will be created and while there’s no official word on local pricing, we will update you as soon as you know.