Often, it is incremental and deliberate design progress — slow to the point that the casual observer might not even notice it — that creates the best products. Tiny changes, layered on one another year after year, are the key to creating an unmistakable visual identity that stands the test of time. It’s a blueprint that is as simple as it is challenging to achieve. For the custodians of a brand to maintain a steadfast faithfulness to a design that might have been born a generation or two before, requires belief as much as it does an understanding that good design will often outlive us all. 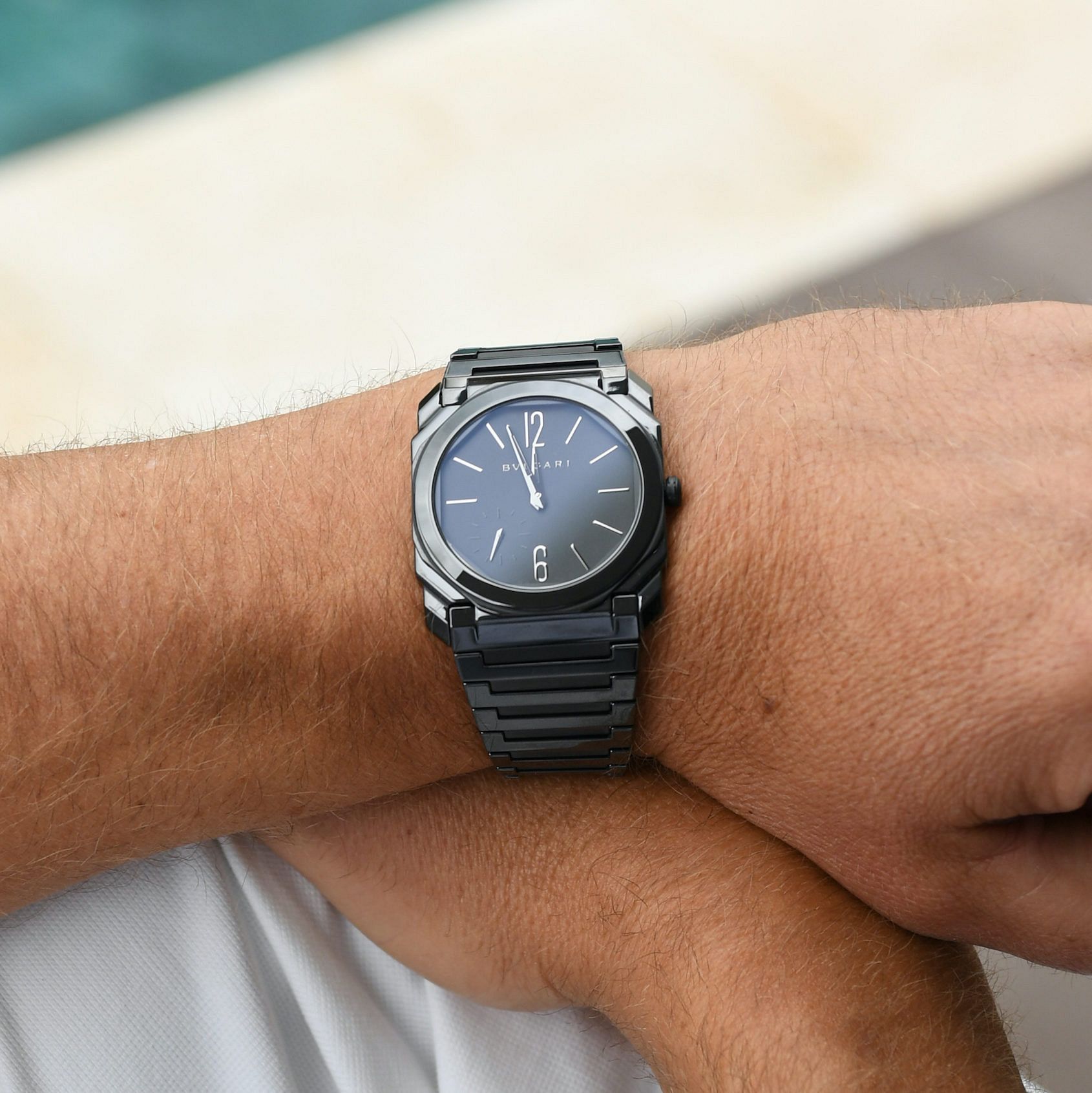 While good designs will likely have long lives, they all have a foundational period in their youth, and that is where the Bulgari Octo Finissimo is today. The heavily faceted octagonal case of the Finissimo was first seen in 2014 with the release of the world’s thinnest tourbillon. At the time it was a curious watch to make for a brand that was best known as a jewellery firm, but it was the first sign of Bulgari’s unrelenting watchmaking intent. 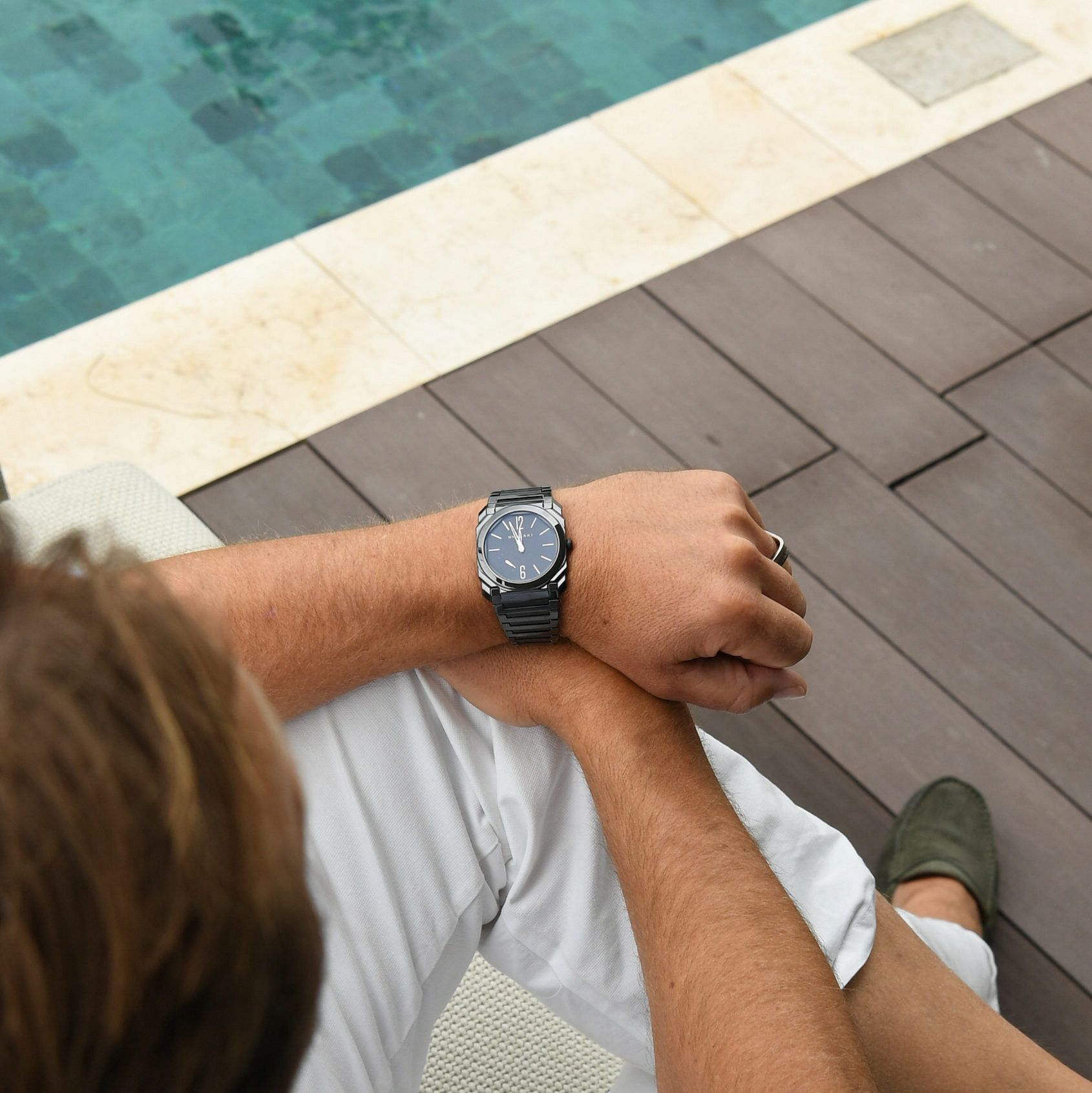 Bulgari followed the thinnest tourbillon record with another Octo Finissimo record in 2016 — the world’s thinnest minute repeater. It wasn’t until 2017 that the Bulgari Octo Finissimo Automatic was released, an offering that was slightly more practical for the day-to-day. In the process, they also broke a third record for the thinnest automatic watch ever. The Bulgari Octo Finissimo Automatic also formed an angular template for the slew of wristwatches that followed, executed in rose gold, titanium, ceramic, carbon fibre and stainless steel.

“The Octo is unique. Because we can change the finishing, even with the same material, and the watch changes completely. The idea behind the new ceramic reference is to have more bright surfaces, more smooth, and be a different sort of cool.”

Along the way, the Octo Finissimo has seen numerous changes to the finishing of the watches, one of which we saw this year when the Bulgari Octo Finissimo in ceramic was released with a blend of polished case finishings. This offered a strong contrast to the original ceramic reference that featured a totally sandblasted finish, a comparison that I took a closer look at here. But focusing specifically on the new sandblast-polished reference, we see how this incremental progression has all the hallmarks of an evolving piece of strong design. 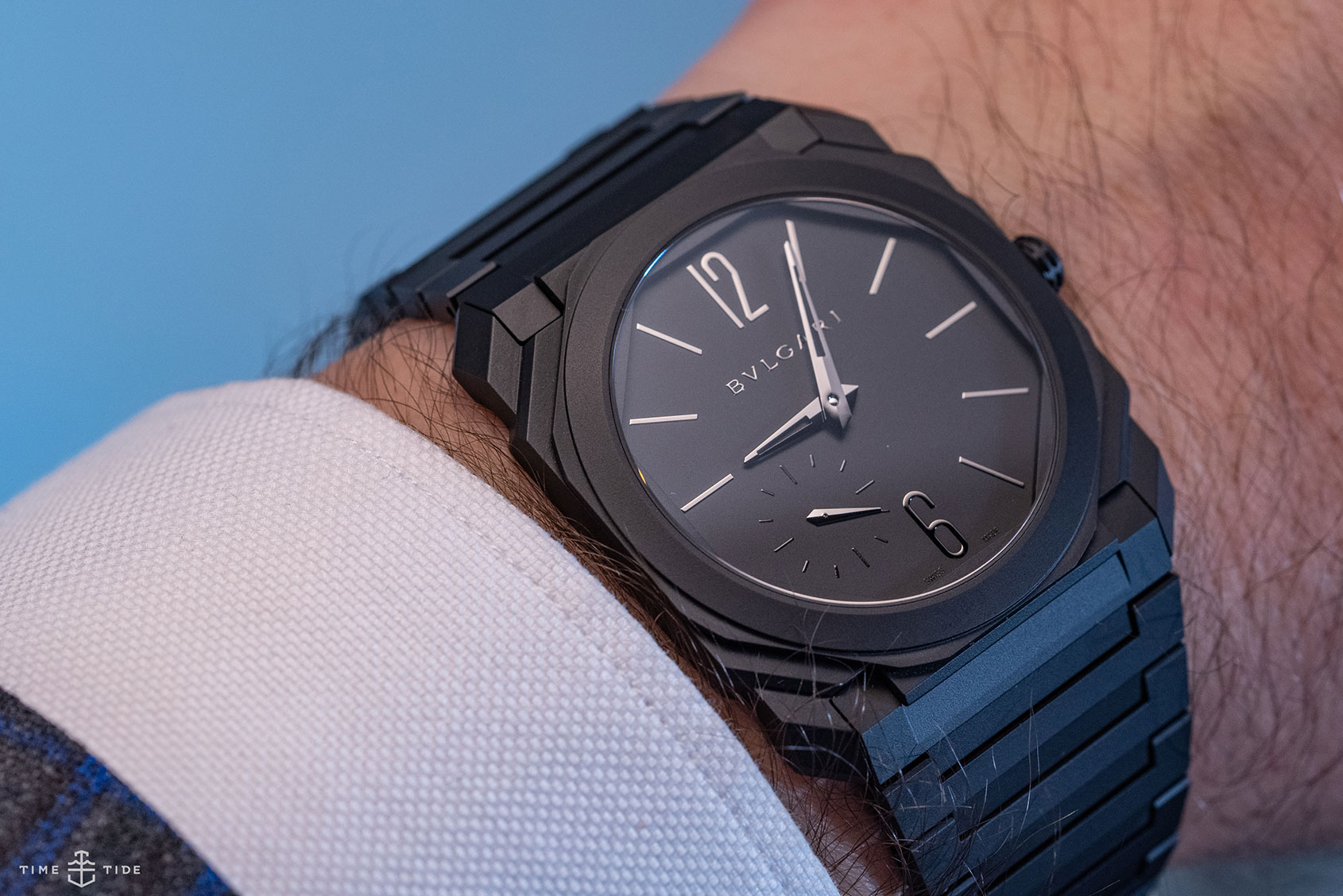 In an interview with Andrew McUtchen in January this year, the chief watch designer at Bulgari, Fabrizio Buonamassa Stigliani, explained that as the Bulgari Octo Finissimo has become more well known over the last half decade it can be expressed in different ways while still being recognisable. “Now the Octo is strong enough to impose its personality,” he said.

“The Octo is unique. Because we can change the finishing, even with the same material, and the watch changes completely. The idea behind the new ceramic reference is to have more bright surfaces, more smooth, and be a different sort of cool.”

These things the watch certainly achieves, even with only a relatively minor change to the way it is produced. It shares the same basic specifications as the rest of the Octo Finissimo time-only references, measuring 40mm in diameter and sitting only 5.5mm off your wrist. The dial is the same sandblasted ceramic as the previous version, with applied hour markers, semi-skeletonised dauphine hands and a small-seconds indicator at the 7.30 position. 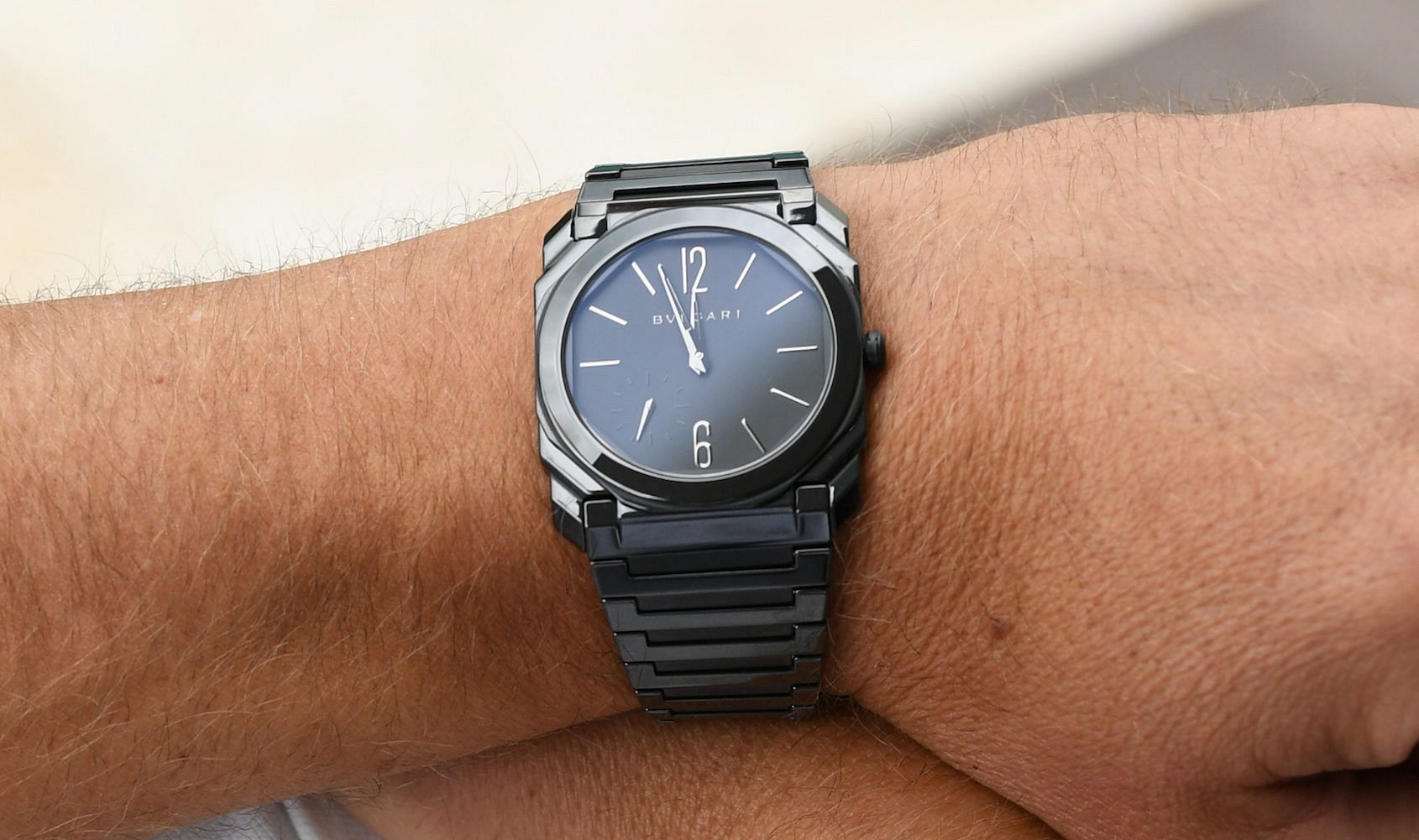 Housed between the ceramic dial and the exhibition caseback is the caliber BVL 138, which measures a wafer-thin 2.23mm and 36.6mm in diameter. Unlike the peripheral rotor that we saw in the Bulgari Octo Finissimo Chronograph GMT, this caliber features a platinum micro-rotor to wind itself while on the wrist. 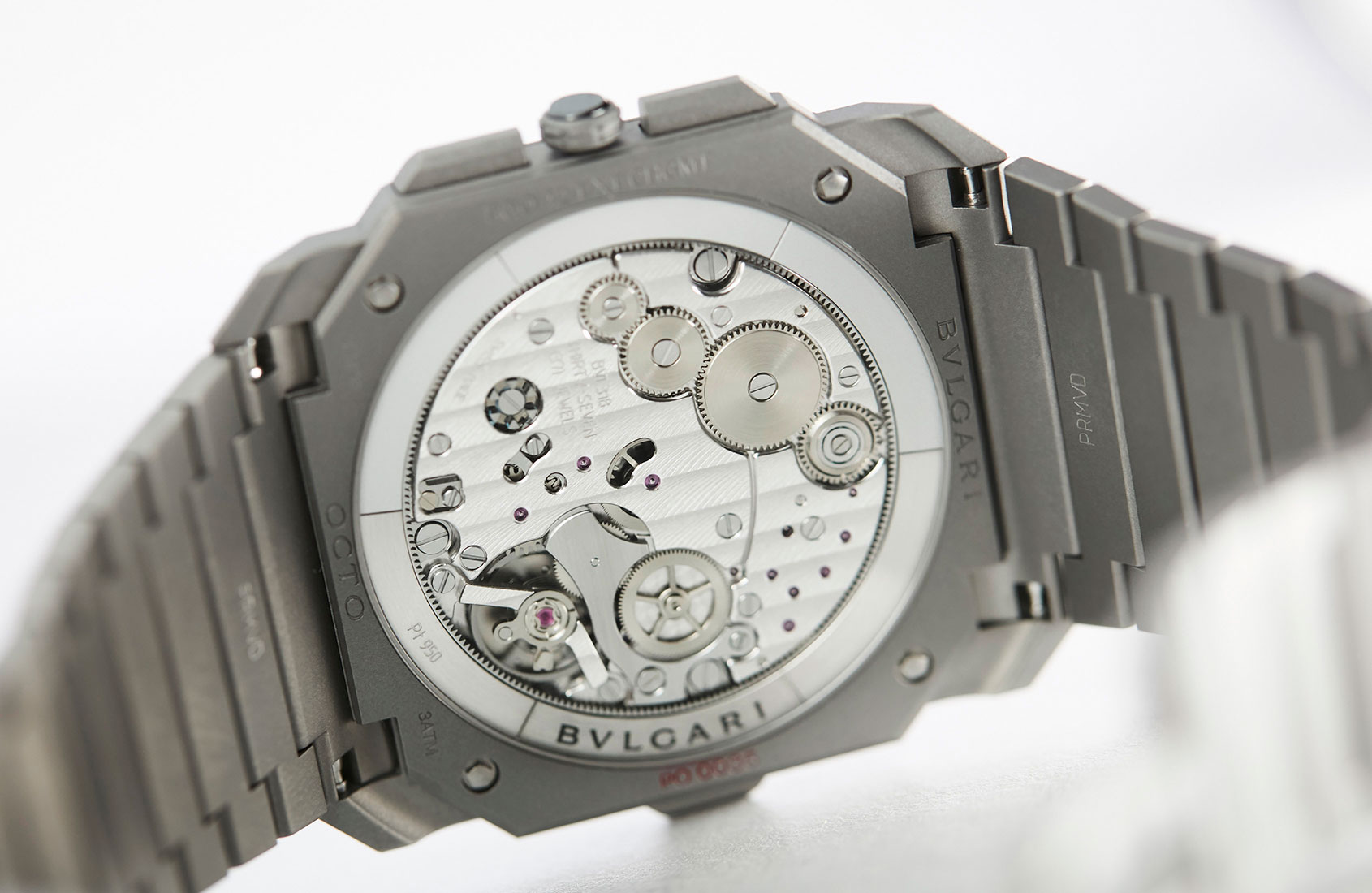 The integrated ceramic bracelet is a critical part of the overall impression that this watch gives, but the integration between the case and bracelet is so seamless that it almost seems unnecessary to point out such a relationship. The feeling it gives is certainly of one fluid piece, a fluidity that is only emphasised by the almost liquid appearance of the material, where the watch and bracelet are unimaginable without one another. 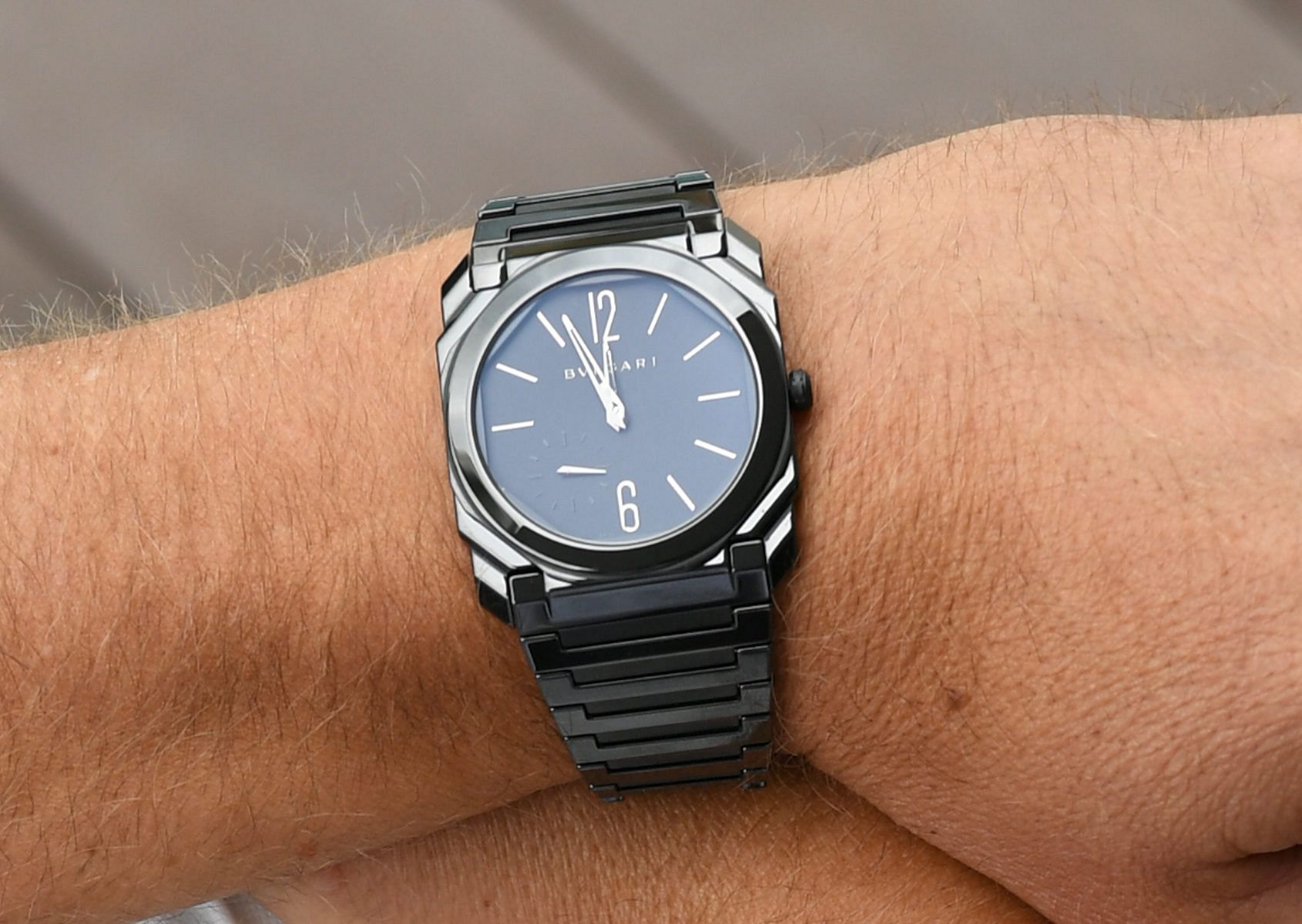 The effect of the polished surfaces seen in the ceramic Bulgari Octo Finissimo is remarkably distinct from any of its eight-sided siblings. The mercury-like shimmer that it creates as light hits the bracelet in motion stands apart from much of the rest of the collection, unified by their granular surfaces and sharp angles. But this difference, while maintaining the same case shape, size and dimensions is a testament to the design team at Bulgari for the strength of their work. If good design is recognisable for its consistency across different mediums, then the Octo Finissimo in sandblast-polished ceramic is a darkly glimmering beacon that will light the way forward for Bulgari.