The story in a second: One of the best watch designs of recent times gets complicated.

I know I’m not alone in thinking that the Octo Finissimo family is one of the most important commercial watch designs of the last decade or so. Sure, it’s based on an old Genta design, but the Octo has evolved so far under the careful ministrations of Bulgari’s design team so as to legitimately stand tall on its own merits. It’s a strong design, one that deigns to ape the past and provides a compelling argument for modernity and a versatile platform that looks great in numerous metals and treatments. And while the Octo exists in Bulgari’s ‘regular’ watches, the Octo Finissimo takes the design to its logical, breathtaking conclusion. And the Octo Finissimo Chronograph GMT proves that, and then some. 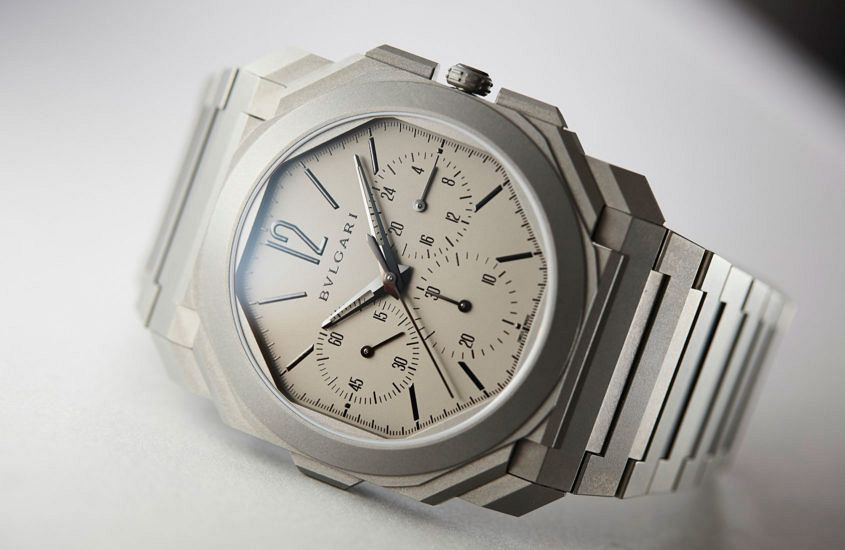 There are two things that really struck me about the case of this watch. Firstly, just how well it works as a chronograph. Now, many watch designs look a little ordinary when that smooth profile has been marred by a few pushers popping out all over the place. Not so here. In fact, if it wasn’t for those registers on the dial, you probably wouldn’t notice that those subtle faceted ears on the left and right sides of the titanium case were, in actuality, pushers. But they are. And more than that, they’re balanced. The left-hand pusher, which adjusts the second time zone hand, provides a stylistic counterweight to the chronograph actuators. Brilliant stuff. 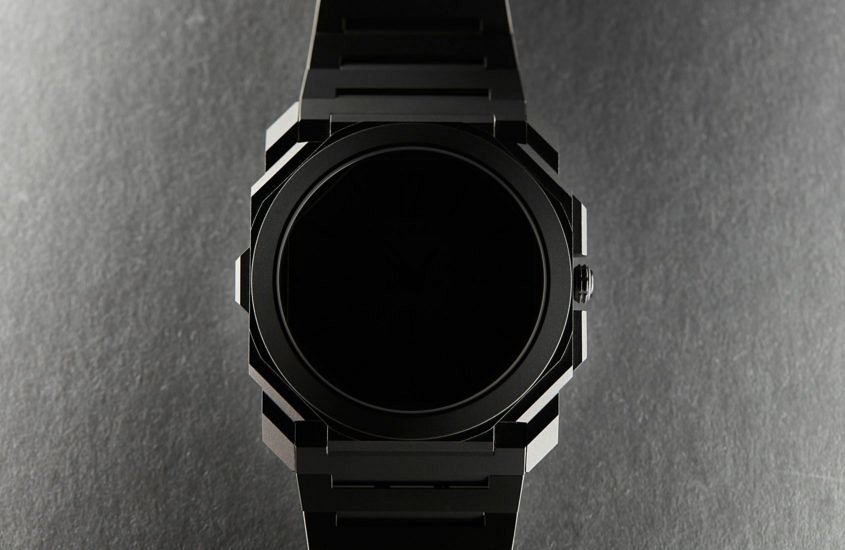 The other element of this featherweight case going in is that it’s larger than the time-only Octo Finissimo (which is 40mm). This guy clocks in at 42, which is hardly massive in the scheme of things. But factor in those pushers, the general on-the-wrist optics of a square watch (if the camera adds 10 pounds, a square watch certainly adds a few mm), which when combined with the super-svelte profile (6.9mm), definitely results in a watch that wears large. 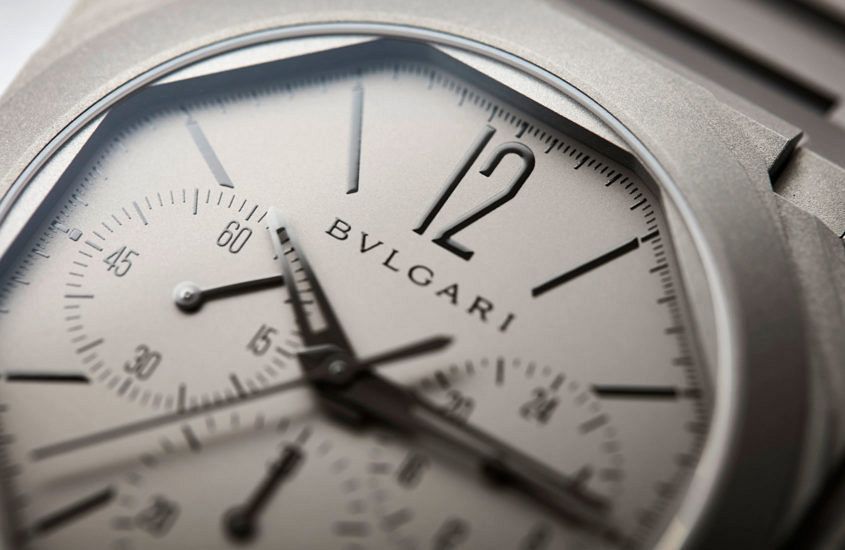 The dial of this OF, like most of the others, is on the plainer side. And while typically this could be read as a negative, I think Bulgari has made the smart play here. On this watch ‘plain’ could equally easily be substituted for ‘legible’ and ‘keeping the watch thin’. It also, and here’s the real winner from my POV, keeps the focus on the case, which is where the action is at. 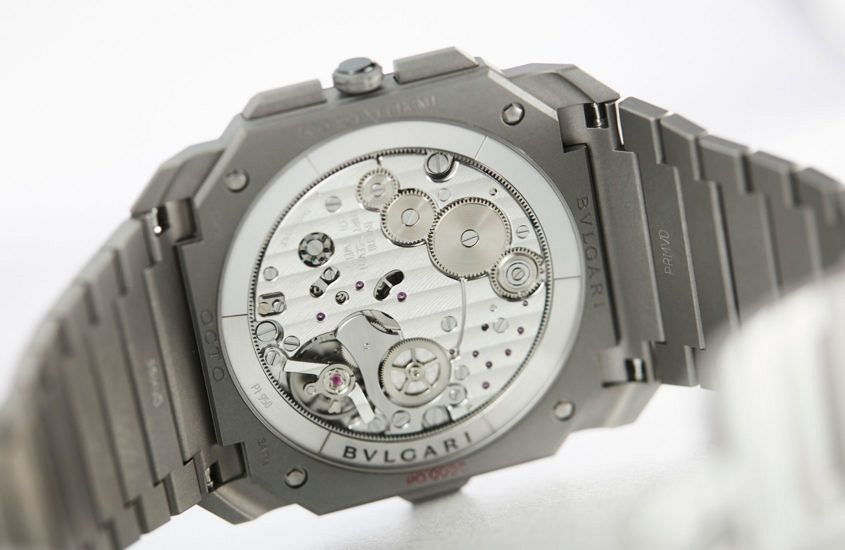 Of course, there’s plenty of action on the inside of the case, too. BVL 318 is the name of the movement running the show here, and it’s a corker. Ultra-thin movements are a famously tricky proposition, and only a handful of brands have managed to execute them to any degree of success. Add a famously finicky complication like an automatic chronograph into the mix and we’re talking seriously impressive. A GMT as well? Just collect your GPHG award on the way out. How thin are we talking about — 3.3mm. That makes it the thinnest automatic chrono on the movement, toppling a 32-year-old record held by Piguet. To pack this much watchmaking fun into such a small package, Bulgari have employed my favourite type of rotor — peripheral. To keep the weight uneven, half of this rotor is aluminium, while the other half weighs a little more thanks to the platinum construction. You can expect 55 hours of 28,800 vph timekeeping goodness. 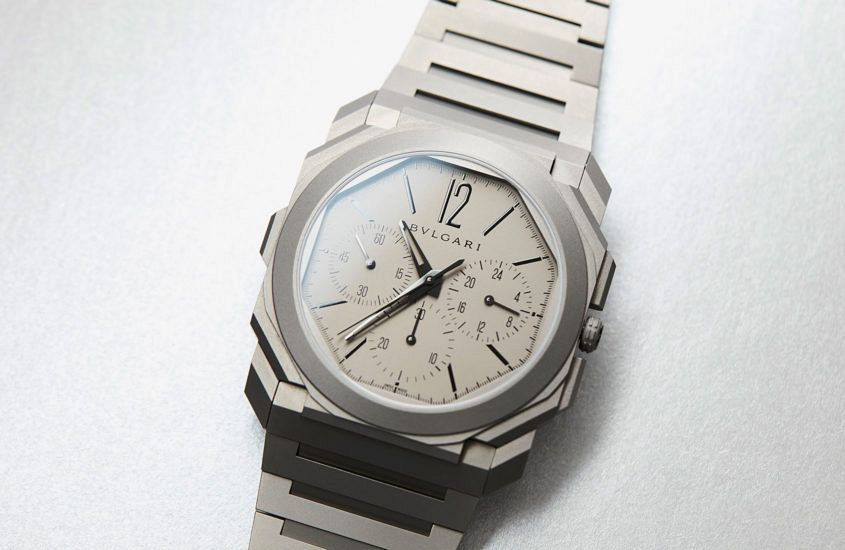 To my mind, the Octo Finissimo is a watch that is as much about the bracelet as the watch head. Sure, there are strap options, but the identity of the bracelet is so strong and so integral to the design of the watch, that for me it’s a no-brainer. Structurally, there’s not too much changed here. It’s still great. 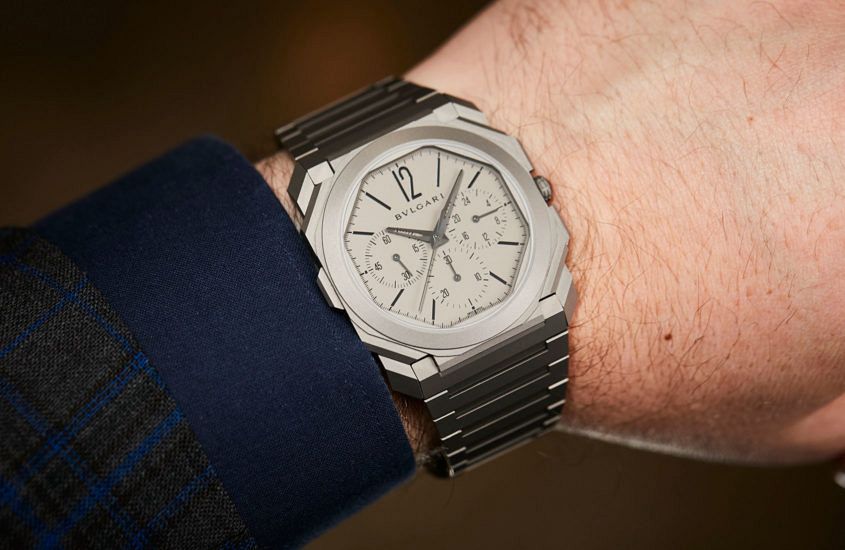 While the bracelet hasn’t changed, the overall on-the-wrist feel has. On the time-only piece the wrist feel was seamless from bracelet to watch: the weighting was so even it was almost like wearing a bracelet. This time around, the extra size and slight increase in heft results in a watch that feels somewhat less ethereal, and more ‘watchlike’. You can feel the weight of the watch itself as you move it on the wrist. I wouldn’t say this was a point in or against its favour, but it’s an interesting shift, and one worth noting. 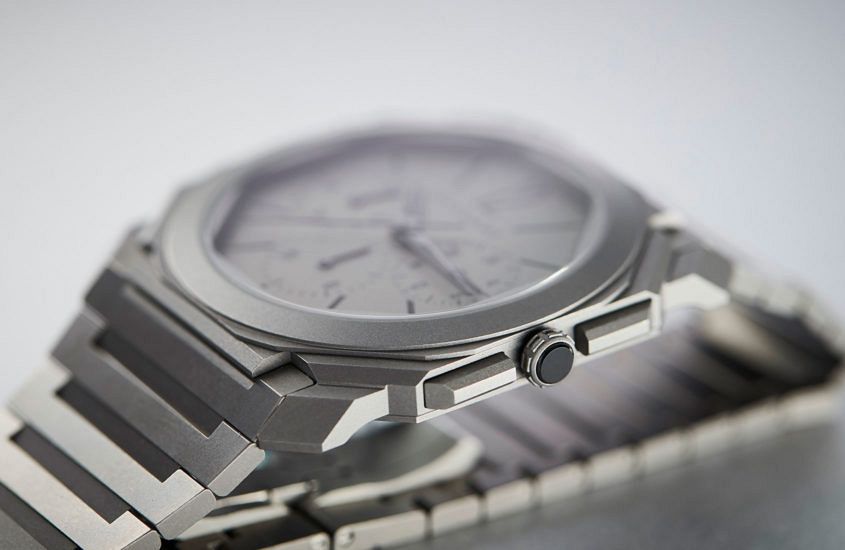 If I’m completely honest, few watches have excited me in 2019; it’s been a pretty safe year. And while the Bulgari Octo Finissimo Chronograph GMT could be read as a ‘line extension’, for me it was one of the real exciting moments. As I’ve said, the OF is one of the real standouts in high-end commercial-scale watchmaking at the moment, and the continued evolution and complexity of the line is exciting to watch. I can’t wait to see what’s next.

To be frank, it’s not for everyone. It’s a watch that requires a level of confidence and sophistication that typically comes after a prolonged exposure to the world of fine watches. If that sounds like you, I’d strongly suggest seeking it out and trying it on.

Shave a few millimetres off and I’d be very happy.

Made in partnership with Bulgari.  However, the opinions expressed in this article are our own in accordance with our Editorial Policy.