Editor’s note: It’s slender, but it weighs a lot. It’s gold, but it doesn’t look like it. I just can’t get the Bulgari Octo Finissimo in rose gold out of my head. And that’s even factoring in the epic new black ceramic version we saw at Basel. Seriously, will someone spot me $60K?

The story in a second: Bulgari’s latest take on the Octo Finissimo Automatic is the anti-gold gold watch.

How about a riddle to start your day off right? When is a gold watch not a gold watch? When it’s Bulgari’s darling, the Octo Finissimo Automatic, in rose gold. Now, obviously it’s a gold watch, but it looks and wears like no other gold watch I’ve ever had the pleasure of wearing. 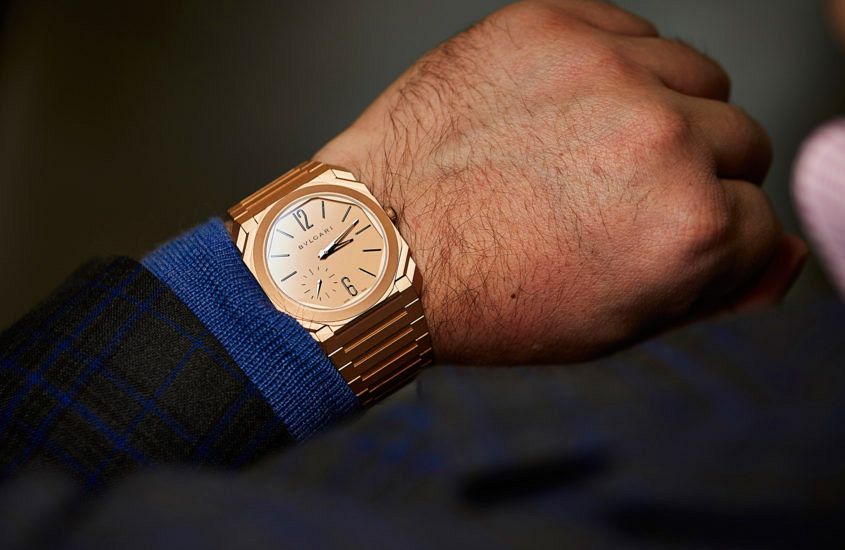 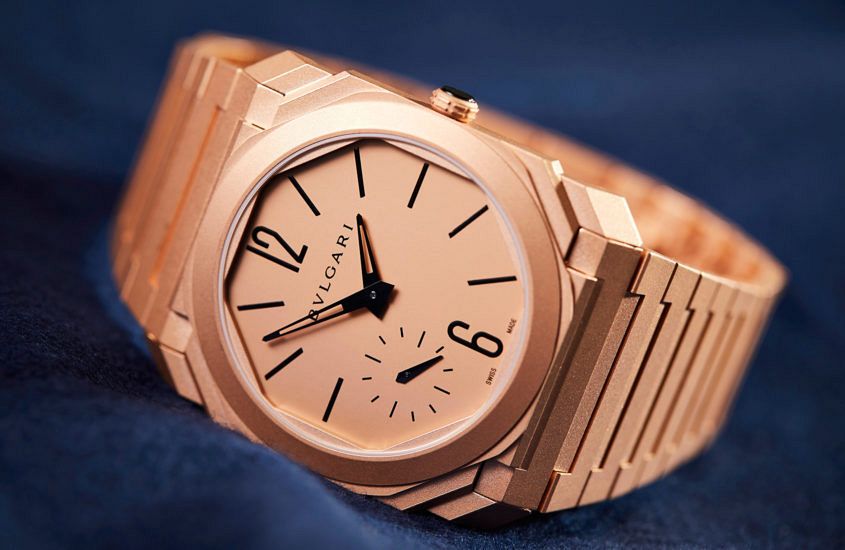 While the movement and other elements of habillage are important to this watch, really, it’s about the case (and bracelet — more on that shortly). The design, the material, the treatment. All of it really. Let’s start with the familiar. The Octo Finissimo case itself is a pretty well-known quantity by now. It’s a much thinner (5.15mm to be precise) version of the regular Octo, which is an evolution of Genta’s original design. The Octo Finissimo Automatic is all sharp lines; the only curves to be seen are the bezel (even that is encompassed by an octagonal frame) and the crown. Everything else is facets and angles. The resulting look is instantly iconic, a strong, decidedly contemporary look that, unlike many high-end avant-garde designs, manages to be entirely wearable for the long haul. The design of the case provides a very strong foundation for the watch, but what really makes it shine (or rather not shine) is the case material, and its unusual treatment. Rose gold is hardly new or uncommon: the pink-hued precious metal is luxurious, but not as brash as its yellow counterpart. It’s also not a metal you could accuse of being subtle. Until now. Instead of the more traditional polish, the case and bracelet of this Octo have been sandblasted, to stunning effect. The warm glow is there, but the gleam is not — in fact, the matt is almost devoid of reflection. The resulting look is subdued and — dare I say it — subtle. Well, maybe not quite subtle, it’s a solid gold watch with a distinctive design after all, but it certainly doesn’t scream ‘look at me’ on the wrist. The effect is similar in theory to the frosted gold technique used by Audemars Piguet, but I find that AP’s surface treatment, thanks to its use of a pneumatic tool rather than the more industrial sandblaster, actually makes the gold stand out more, giving it a glittering effect. So, while the treatment of this case might be dull in the truest sense of the word, it’s far from boring. 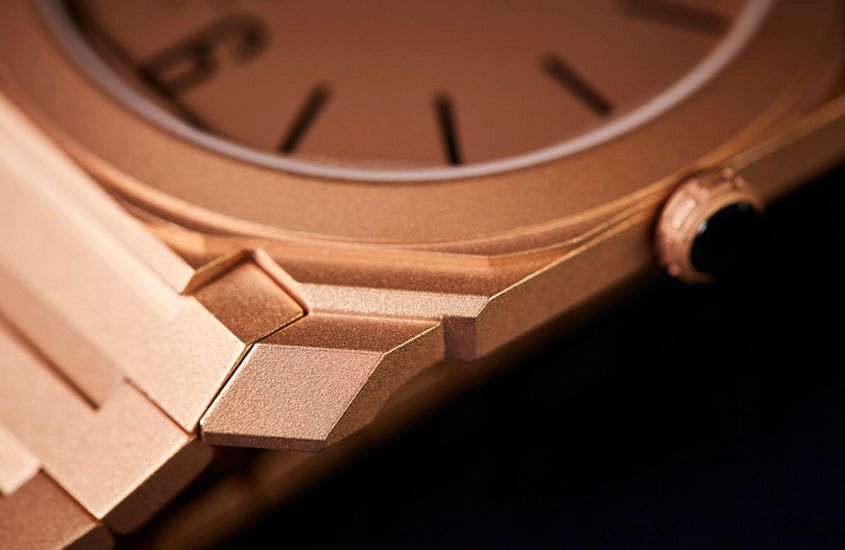 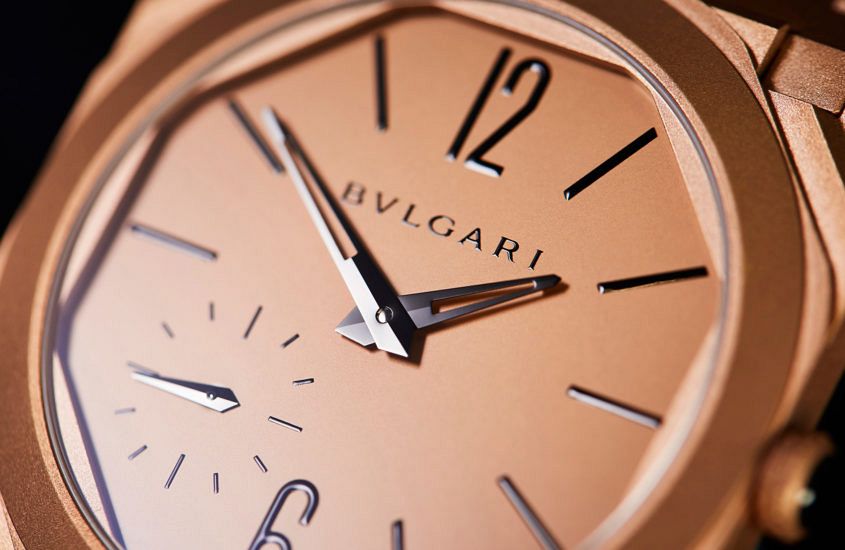 Aside from the colour of the dial (a perfect match of the case), the dial is unchanged. Simple printed details, minimal text, an off-centre small seconds hand, and open, neatly faceted black hands. Now, normally I might say that this dial is too simple for the rest of the ensemble, but given that one of Bulgari’s main goals would have been to work with some very tight tolerances, I’ll cut them some slack. And besides, the comparative restraint of the dial really lets the case shine (figuratively, not literally), which is, to my mind, the right play. 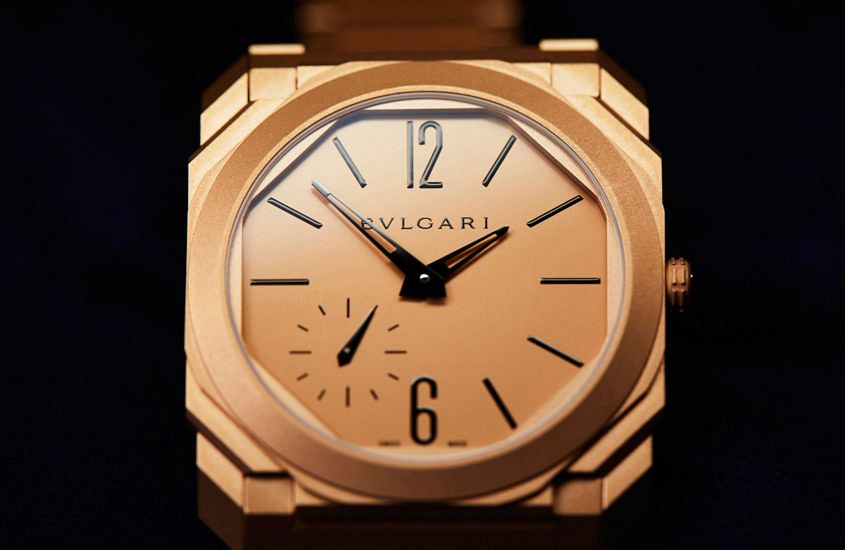 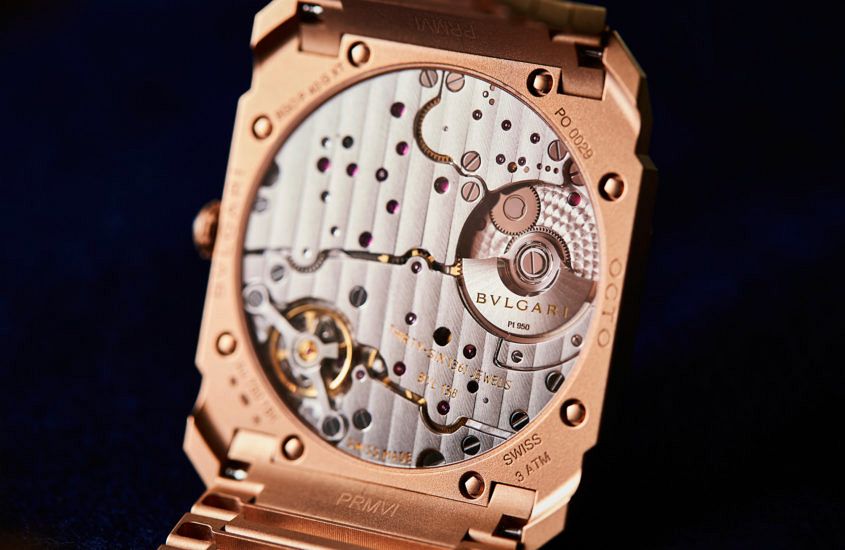 While it’s true of any watch to say that the movement is the beating heart that makes the whole thing possible, it’s even more true of the Octo Finissimo’s BVL 138. Really, this movement defines the watch, not through function, but through form. It’s the 2.23mm height that allows the Octo Finissimo to be a razor-thin slice of ultra-thin glory. But what astounds me about the BVL 138 isn’t just the thinness per se, it’s the fact that it’s been achieved using fairly conventional construction; the movement hasn’t been integrated into the case itself, as some other thin watches do, and the specifications of 3Hz beat and 60 hours power reserve haven’t been trimmed down along with the width. The finishing is pretty, and on par with other higher-end movements of this type: neat Geneva stripes and perlage, a radial pattern on the platinum rotor and well-polished screws. The visual appeal of the movement doesn’t wow like some others, but its technical achievements more than make up for that. 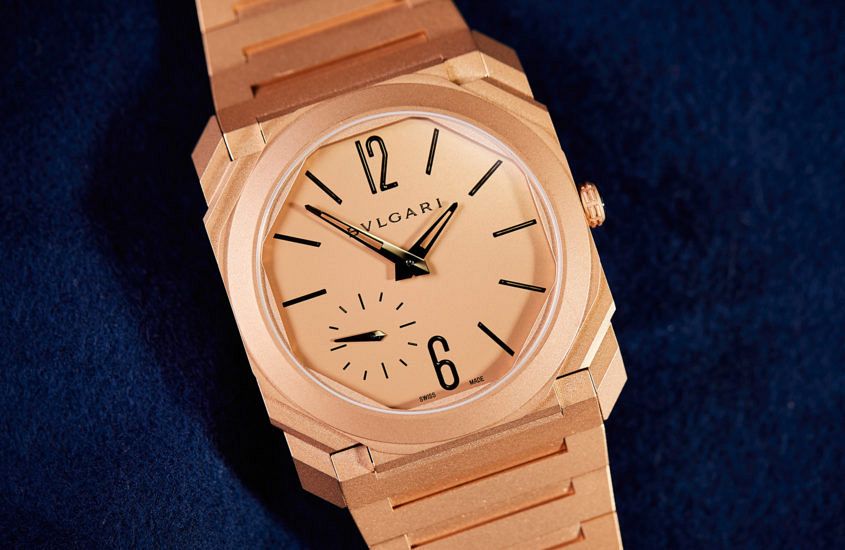 As you might expect, the bracelet of the Octo Finissimo Automatic is the same matt rose gold as the case, in the same angular, geometric style. It’s a real winner of a design, nailing it on both the wearability and style fronts. And obviously it weighs a good deal more than its titanium version, giving it a much more solid and substantial feeling on the wrist, while still being incredibly slender, especially with the impressive folding clasp, which sits flush on the wrist. One interesting element of the bracelet that is unique to the gold version is that the links, while solid, are hollowed out at the rear. This, of course, reduces the weight (and cost) of the bracelet, but also gives your wrist a bit of room to breathe. 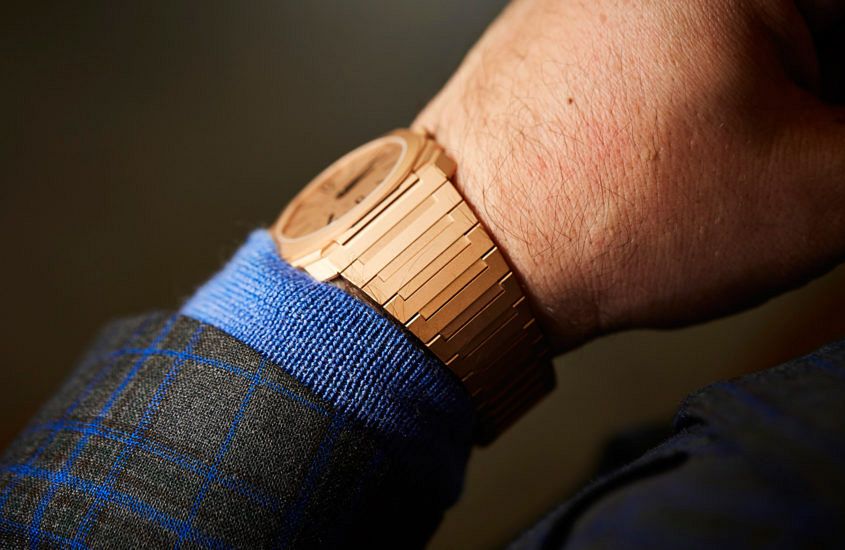 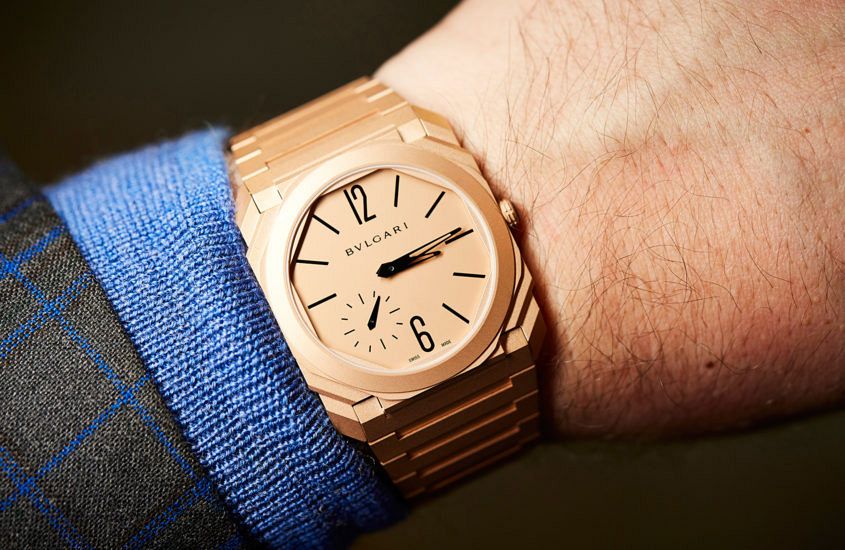 As I mentioned above, the weight-to-thinness ratio is real on this watch, and it’s this feeling of dissonance that got me every time I strapped it on. For me that dissonance expressed itself in an almost childlike joy — I swear every time I wear this watch, or even look at it, I get a big dumb grin on my face. While that amazement factor is certainly something shared with the featherweight titanium version, the combination of weight, height and lux-not-lux metal treatment add up to a watch that is compelling in the best possible way. 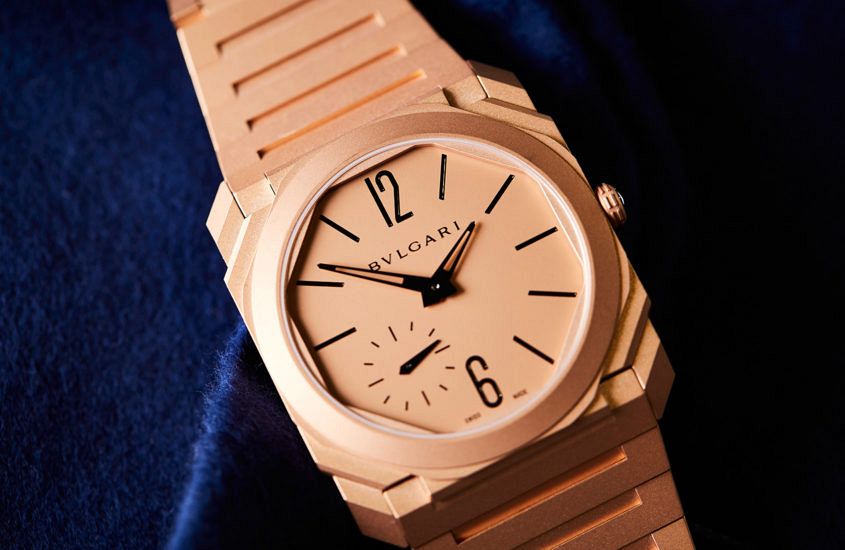 I started this review with a riddle, and I’ll end on a paradox. The gold watch is something deeply ingrained into our collective cultural psyche; it’s a signifier par excellence. On one hand, it’s indisputable that this is a gold watch. It’s a watch, it’s gold and it costs about the same as a nice European car. But on the other hand, it’s an anti-gold gold watch, deliberately messing with the tropes (large, shiny) that give a gold watch its cultural weight.  To me, though, the fact that it flies under the gold watch radar makes it that much more of a serious statement. It’s a gold watch that isn’t a gold watch, which only makes it even more of a gold watch if you get what I mean.

Ever seen sandblasted gold before …?

People with deep pockets and a love of Wallpaper* and Architectural Digest.

I’ve rarely struggled with answering the ‘what would we change’ section as I have on this watch. It’s an integrated design, where all the parts play very nicely together. And it’s not intended as a generalist watch, so suggesting to include some more crowd-pleasing features or functionality is a bit of a no go. Initially, I thought the price of the gold, at more than three times the other variants, was a little on the high side, but then I did some other benchmarking of precious-versus-regular metal watches and in this context the sticker price is within the realms of reasonable. So, I think for the first time ever — there’s nothing I would change on this watch.