Editor’s note: If you want to impress someone with how cool your watch is, it’s hard to beat the Breitling Emergency. We revisit Ben’s story from a few years back to find out why …

There are few watches that live up to their marketing hype, and even fewer that can claim to have genuinely saved lives. Breitling has long been considered the pilot’s watch of choice, but it was the Breitling Emergency that solidified the company’s commitment to aviators and adventurers around the world with one truly unique complication — the personal locator beacon. Celebrating its 20th anniversary this year, we explore one of the most unique watches ever made. 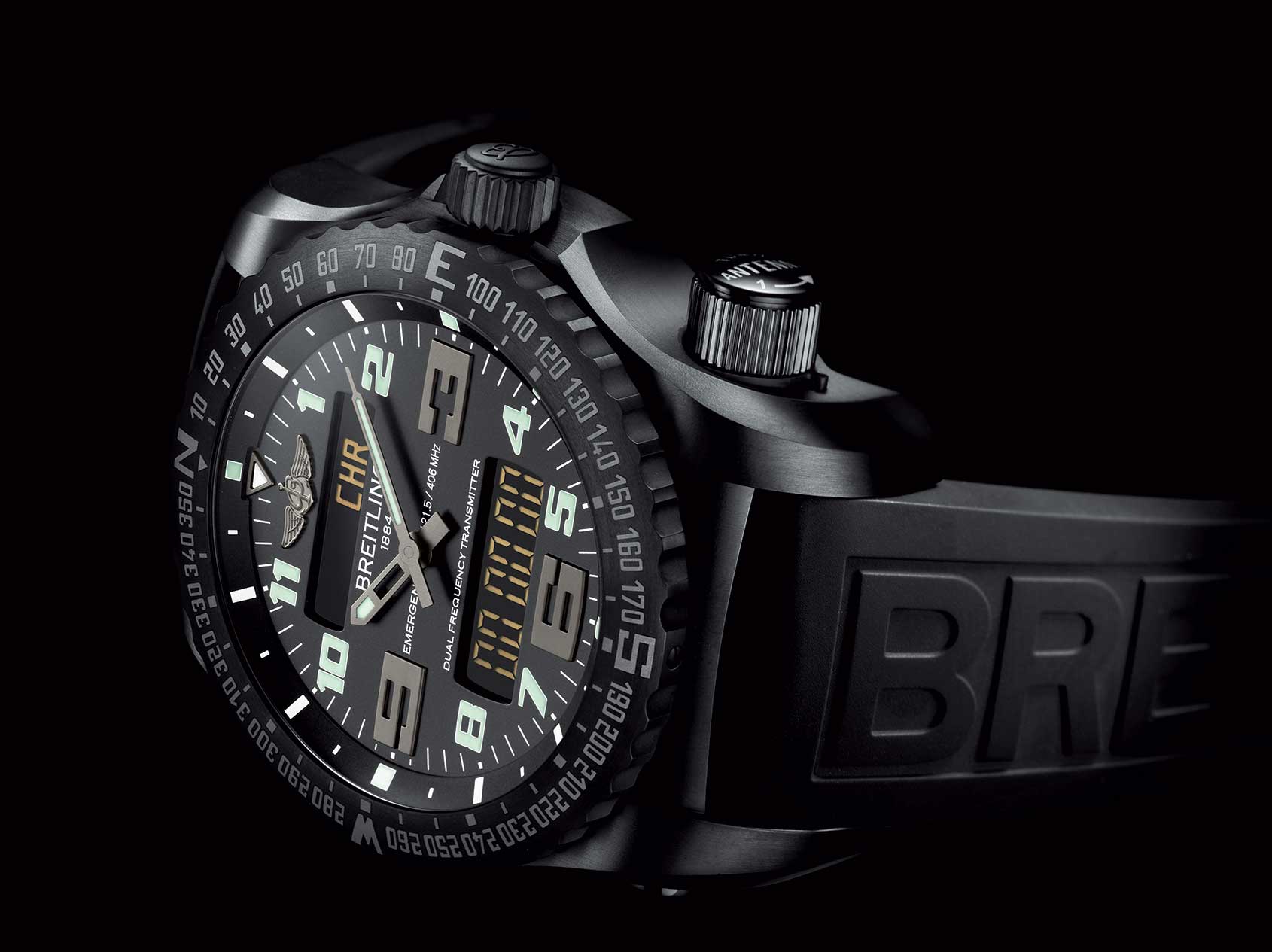 The story began with Ernest Schneider, the man who acquired Breitling in 1979 when it was on the verge of collapse, and kept it afloat during the quartz crisis, thanks to a new generation of iconic Breitling models. An officer with the Swiss Army signal corps during World War II as well as a passionate pilot and engineer, he was involved in discussions at a NATO conference in the mid-1980s about emergency beacons and the high incidence of false activations that cost the relevant authorities significant time and money. It was at these talks that the idea of a watch with a personal locator beacon was born. Following the meeting, Breitling began working with Dassault Electronique to create reliable beacon technology that could be built into a wristwatch, and after a decade of development, the Breitling Emergency was announced.

Released in 1995, the Emergency featured a beacon that, when activated, transmitted a signal on the international distress frequency of 121.5MHz (for owners in the military, the microtransmitter was changed to operate on the military distress band). This transmission could be received up to 167km away and was directional, allowing authorities to locate the beacon with great accuracy. Initially, the Emergency was available only to licensed pilots, but eventually the titanium watch was offered to the general public once a document was signed acknowledging their responsibilities in paying for rescue attempts in the event of a false alarm. Some military units even gifted the watches to their pilots as an unofficial insurance policy, with unconfirmed reports that the Emergency complemented official beacon systems and contributed to successful rescue missions. Meanwhile, if the transmitter was utilised during a true emergency situation, Breitling offered to replace the watch at no charge to the owner. 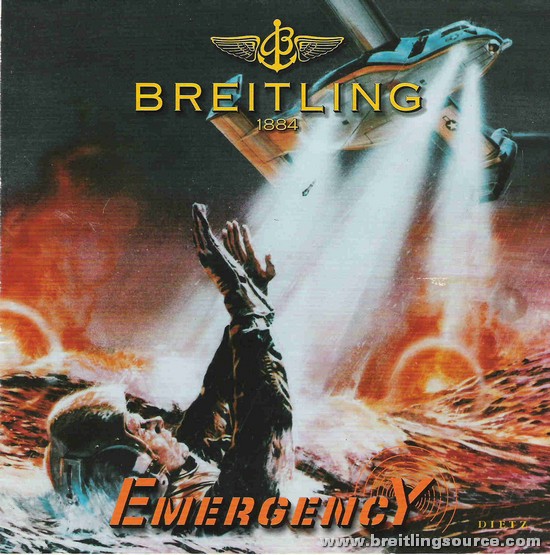 Between 1995 and 2010, when the first Emergency model was eventually discontinued, 40,000 units were sold, reportedly helping save dozens of lives — and according to Breitling, not a single false alarm was ever reported as having come from an Emergency watch. However, false alarms in general were on the rise, and in 2009 the old 121.5MHz frequency began being phased out as the primary distress frequency for international search and rescue, which meant it was time for Breitling to begin work on a new model.

The plan was to come back, bigger and better than ever, and four years later the Emergency II was released. Along with the original 121.5MHz homing signal, the watch — which was now technically classified as a personal locator beacon (PLB) by authorities — now also transmitted on the digitally encoded 406MHz frequency. The new frequency is monitored by the international search and rescue program known as Cospas-Sarsat, with the 406MHz band able to be received by low-level satellites and ground antennae. The digital encoding allows for fewer false alarms as well as a far greater range, but tends to lack the accuracy of the original 121.5MHz. The 406MHz transmitter also requires a much bigger battery to be powered effectively. 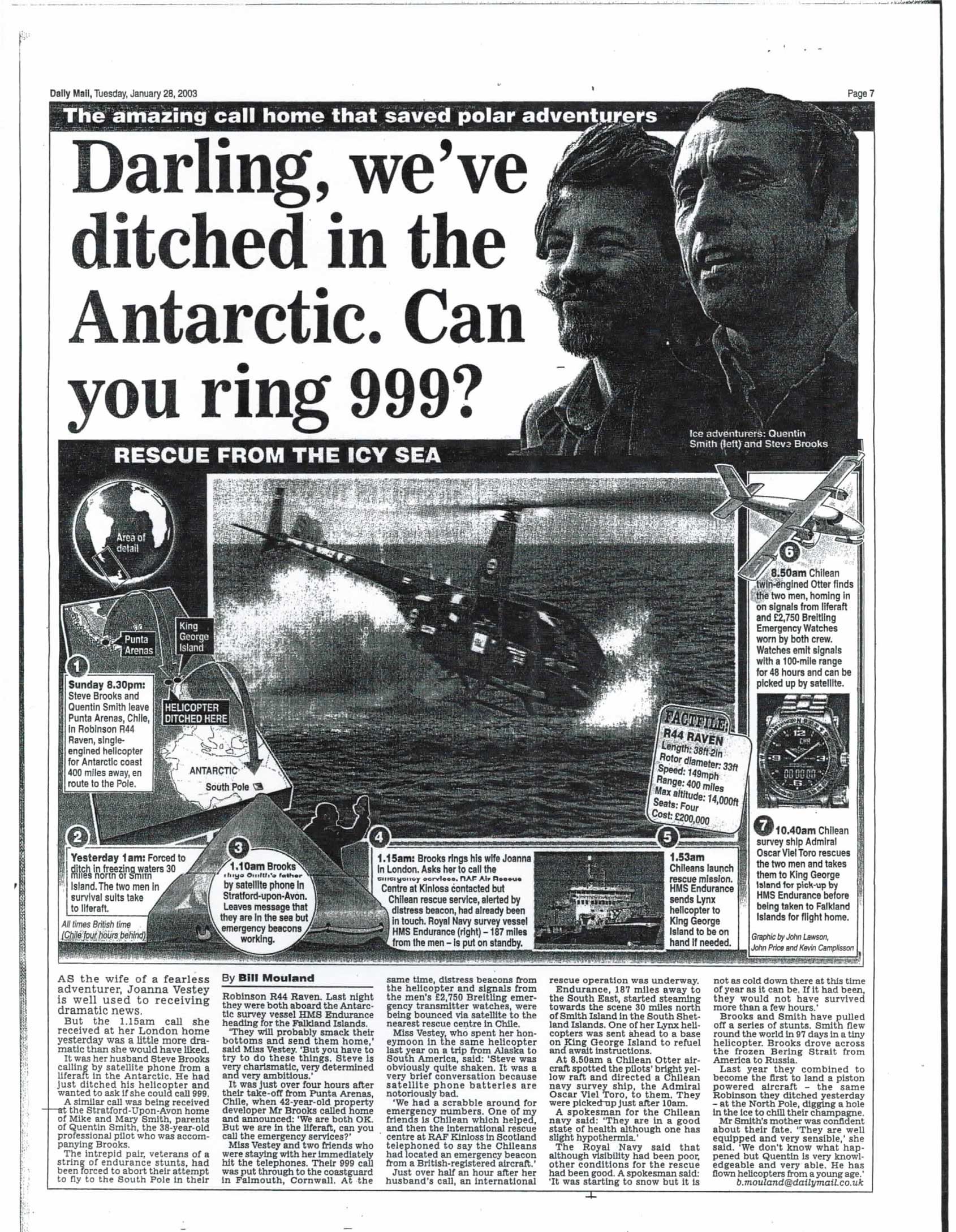 Daily Mail article from 2003 detailing the Emergency being used in a rescue.

The Breitling Emergency II lays claim to being the first wrist-type dual frequency personal locator beacon, boasting truly impressive feats of engineering miniaturisation — particularly when you consider most current PLBs are the size of a packet of cards while the Breitling’s day job is to be a proper, fully functioning watch. It can also effectively transmit within a temperature range of -20°C to 55°C over a course of 24 hours, and has a rechargeable lithium-ion battery system that works independently of the watch movement, with the charger also doubling as a tester unit. 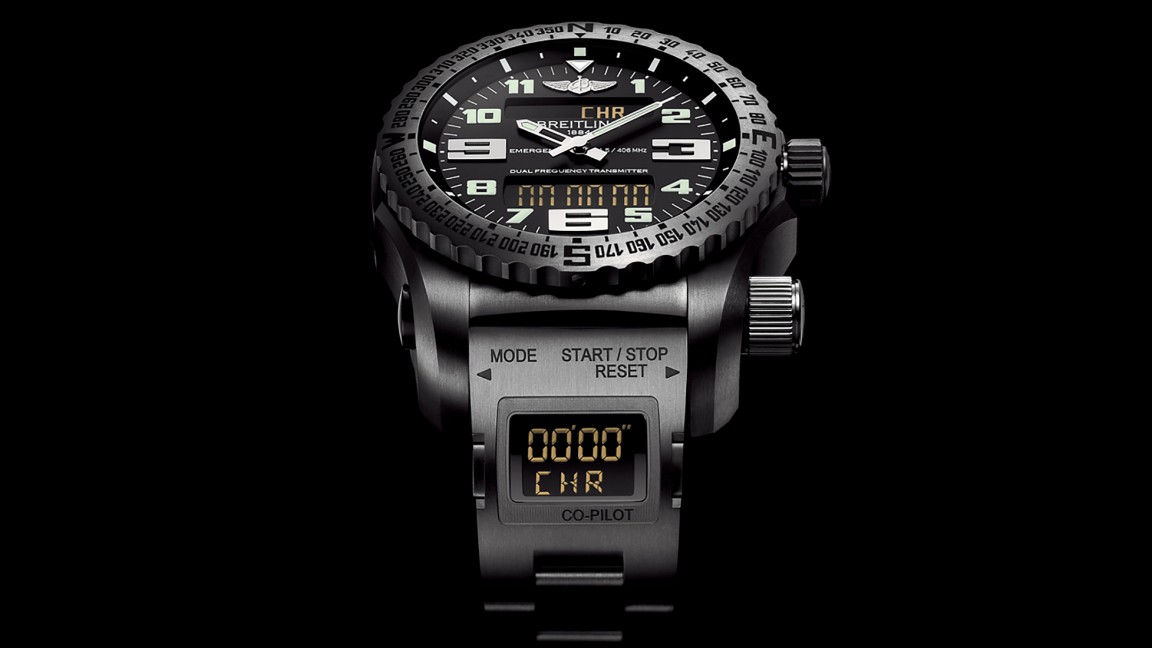 In spite of the PLB’s impressively compact design, as a watch the Emergency II is imposing on the wrist, clocking in at 51mm across and 21.6mm high. That said, it weighs a comparatively slight 144g, thanks to the extensive use of anti-magnetic titanium throughout. The Swiss COSC-certified Caliber 76 SuperQuartz movement provides both analogue and LCD digital displays, as well as all the bells, whistles and alarms that come standard with a digital watch these days. Water resistant to 50m, the Emergency II is certainly no diver’s watch, but is more than sufficient for the majority of users. The dial comes in a choice of black, yellow or orange, and for those who aren’t a fan of the titanium Professional bracelet, a rubber Pro Diver III strap is available.

Satellite beacon technology aside, the biggest difference between the watch’s first and second incarnation is the price. With an Australian retail price expected to be around the $19,000 mark , the Emergency II is significantly more expensive than the original, which sold for around a quarter of that 20 years ago. Still, while it may be pricey for a quartz watch, most adventurers would consider it cheap insurance. Not that you can buy one in Australia yet. Despite being released two years ago and our country enjoying some of the most remote locations on earth, Australian authorities have yet to approve this potentially life-saving watch. We hope the new version gets the green tick soon, because the Breitling Emergency possesses one of the most unique and practical complications ever worn on the wrist.