Editor’s note: Next week, Breguet will unveil its 2019 releases to the world, and we can’t wait. So, in preparation, we thought we’d have another look at Justin’s piece on the fundamentals of Breguet’s approach to watchmaking and watch design … 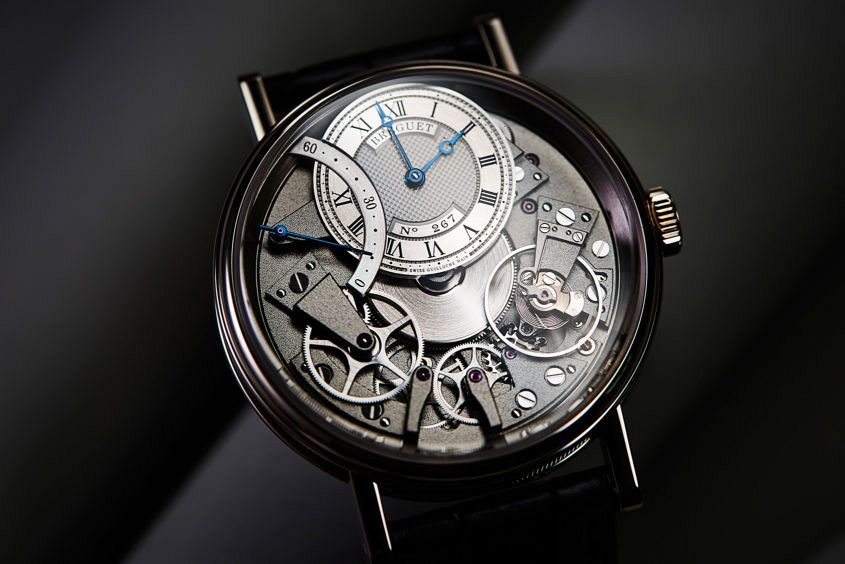 With a brand so rich in history, the origins of what can only be called typical Breguet design cues date a fair ways back into the archives. Contrary to the case of countless other brands on the market, the components that make up Breguet’s core design mantra could hardly be accused of being derivative, and each element has its own origin story of sorts rather than the typical “we put that there because we wanted to make a dive watch”. Breguet has been busy perfecting their craft since 1775, and have consistently survived the industry’s ups and downs including the quartz crisis. Of course, the brand changed hands a number of times between its origins and landing in the firm grip of the Swatch Group in 1999, but this length of continuous operation, combined with some fairly impressive innovation through the decades and centuries, is nothing to sneeze at. For the sake of brevity, we’re going to stay on the design side of the fence this time around.

Dem hands tho … (and them digits) 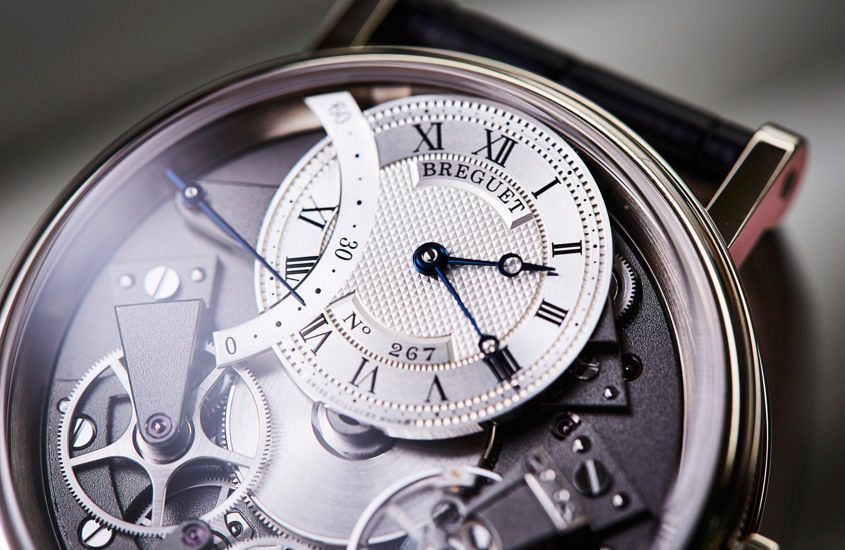 It’s hard to say which Breguet design cue is the most easily identifiable of them all, though few would argue if the classic blued Breguet hands were listed at #1. Elegantly slender, and featuring an eccentric moon-shaped tip with a fine protruding point (or simply a round tip with an offset round cutout), they were penned by Breguet in the late 1700s. It wasn’t long before the style of hands was adopted by other watchmakers of the period, forever being cemented into the horological history books as “Breguet hands”. Abraham-Louis Breguet also developed a particular script for his numerals and indices that the brand continues to reference on enamel dials in its present-day collections. These numerals have a very fluid, romantic flow to them, appearing similar to fine calligraphy rather than the more austere and matter-of-fact printing seen in other designs. While these are cleverly done, it’s the attention to detail in the minuscule minute markers that’s particularly impressive — if not a little over the top. If you look closely at one of these enamel dials, you’ll see that each minute marker is in fact a small star rather than the conventional dash or dot, and the 5-minute indices are also unique in design. In the case of the modern 7147, depending on the orientation you’re viewing them from, they could be interpreted as a small letter V above an O that is flanked by two dots. Viewed in the other direction, they could almost pass as a stick person with dots for hands (once you’ve seen it, it’s hard to unsee). 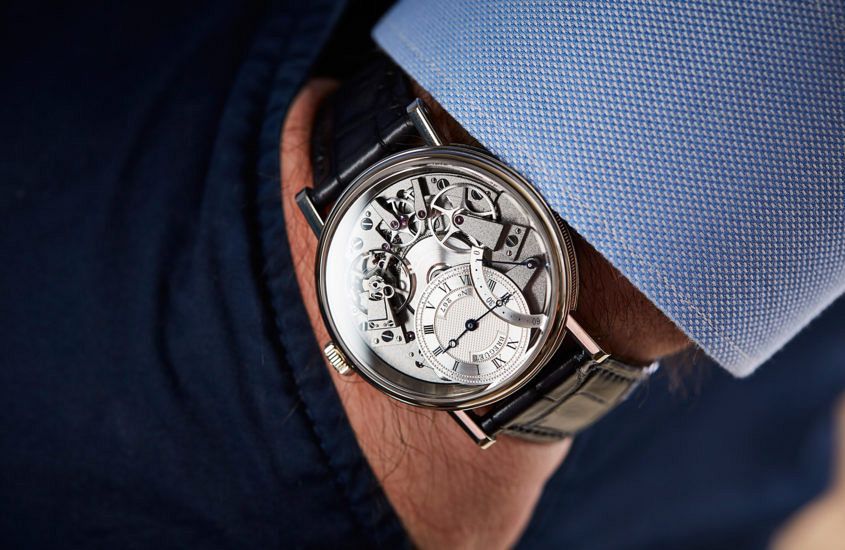 Once again, a treatment that traces its origins all the way back to the early days of Breguet, the way Breguet works with engine-turning/guillochage is different from what’s more commonly seen within the industry. The brand has long mastered more textured techniques like Clous de Paris and barleycorn patterns, as much as they have turned the dial craft technique into a more artful form, creating rich wave patterns or subdials that radiate like small suns. The best part is that the brand refuses to concede to modern technological advancements. In their ateliers in the Vallée de Joux, artisans use traditional engine-turning lathes, which date back to the late 1800s/early 1900s, to produce these long-lost techniques in the most faithful way possible. With decades upon decades of experience within the workshop, this is precisely why the brand has been able to master elaborate guillochage on soft materials such as mother of pearl. 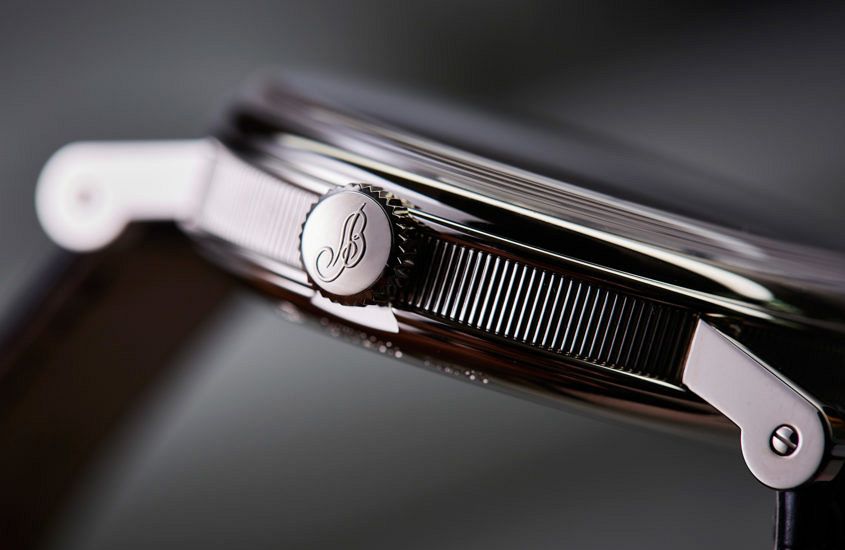 A modern Breguet case is hard to mistake for anything from the competition as well, primarily on account of the decorated nature of its caseband (the outer perimeter of the case, viewed at 90 degrees from its dial). This ribbed pattern — dubbed “case fluting” — is a unique pattern that involves quite the laborious process to achieve. You see, it is not simply a larger block of metal machined down to this pattern, but instead the basic form is created during the manufacturing process called cold rolling, and then the fine edging and polishing is completed by hand. While much more laborious, this technique ensures far greater structural integrity than could be achieved from a machined block finishing. This past year, the brand tweaked this case design feature with their update to the Marine 5517. This titanium-cased release features a wider and more angular fluting than what is seen on cases made of steel or precious metals, giving it a slightly more angular or architectural aesthetic. 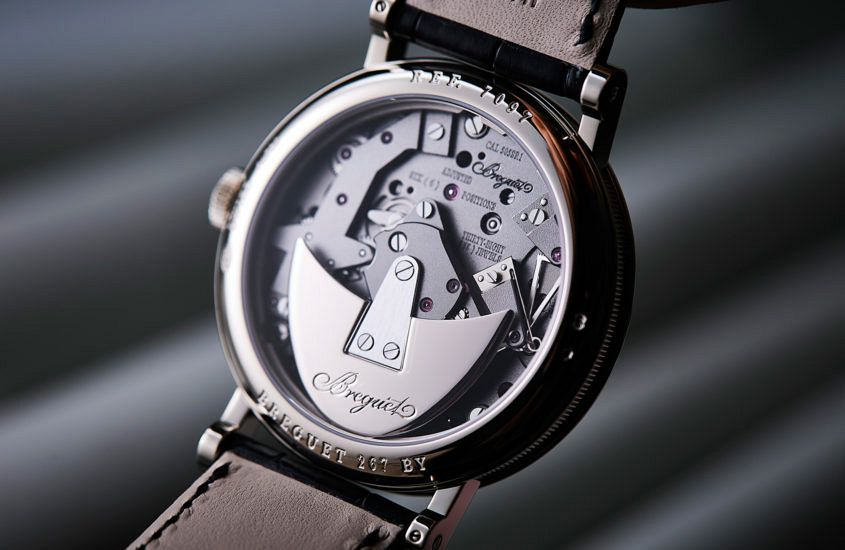 Another particularly charming element of Breguet design present in the Tradition collection is how they carry forward so many interesting design cues from the early days of watchmaking into their modern calibers. Exposing elements of its gear train above a sturdy baseplate, details like the shape and construction of bridges, a large balance wheel (albeit fitted with a very modern silicon balance spring), and the application of a unique textured finishing to all exposed components, give the Tradition pieces a very distinct aesthetic that is unrivalled in its class. In the case of the self-winding Tradition 7097, even its anchor-shaped rotor design is a throwback to their early self-winding pocket watch calibers from the late 1700s.