Editor’s note: Dive watches tend to be simple affairs, but not always. Justin embraces complexity (and calendars) in his review of the Blancpain Bathyscaphe Quantième Complet Phase de Lune. Read on …

The story in a second: A classy calendar for the life aquatic. 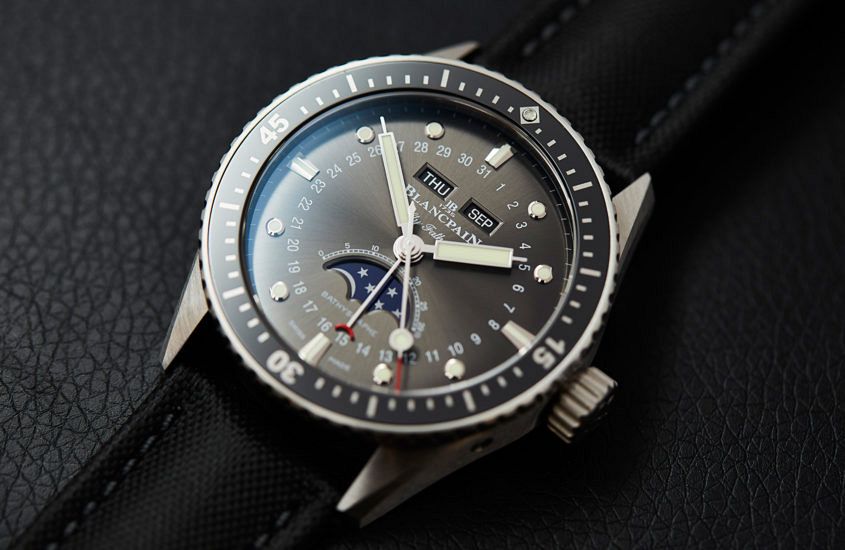 Expanding on a dive watch collection — especially one with such a rich history as the Blancpain Fifty Fathoms — is a challenge at the best of times. Do you stick to classic tool watch roots? Do you step outside the box with a complication or design with more commercial appeal? Do you start toying with unorthodox case materials? There are a lot of ways to go here, and as we’ve seen year after year, the results can be fantastic, just as easily as they can be questionable. We’ve seen Blancpain take some interesting approaches with the Fifty Fathoms Bathyscaphe collection recently, including the blue ceramic-cased flyback chronograph Ocean Commitment II, but for 2018 we were presented with a couple of very unexpected dive watches from the longstanding brand. The most curious is the complete calendar moonphase (Quantième Complet Phase de Lune, per the brand), taking the classic 43mm satin-brushed Bathyscaphe case, and fitting it with a very vintage-y dressy-feeling triple calendar moonphase complication. It’s weird, it’s confusing, it’s the first and only diver with this complication, but it also makes the mind roam to the much-loved phrase: “That’s so crazy, it just might work!” Will it? Let’s find out. 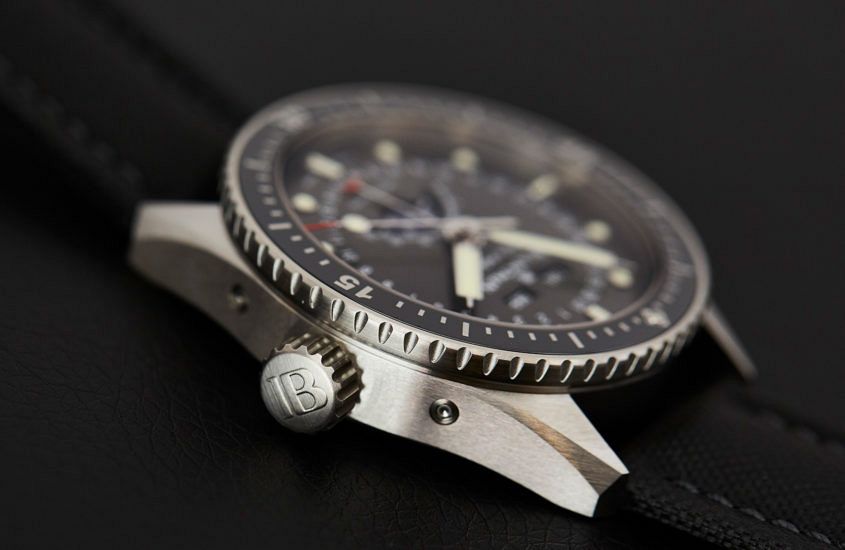 Of the many details about this latest release, its case design is the least altered when compared to prior Bathyscaphe watches. Entirely brushed in finish, as would be expected of a proper tool watch, the only noteworthy change to the 43mm steel case of the Complete Calendar Moonphase is the addition of a pair of corrector pushers located on the case barrel around the 2 and 4 o’clock position. On one hand, the idea of adding pushers to a 300m dive watch sounds a little sketchy, but in practice we don’t suspect they will cause any issues with water resistance. For one, these will not (we can say will not, and not just might not) engage in serious diving, and flyback chronograph variants of the Bathyscaphe already use non screw-down pushers, at this depth rating, so there’s really nothing to be concerned about here. 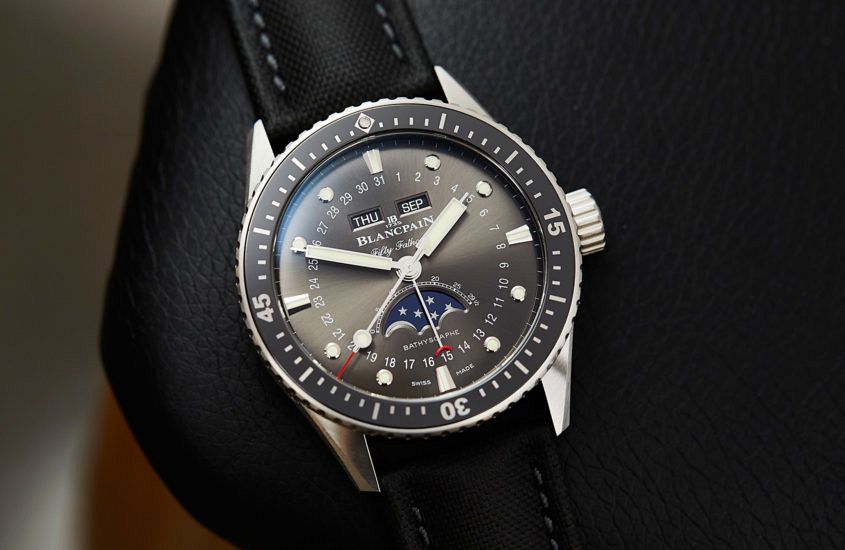 Here’s where we get to the good stuff, as there’s a lot going on on the Complete Calendar Moonphase dial. Compared to a conventional 3-hand Bathyscaphe diver, the slate grey sun-brushed dial is definitely a little busy, though it kind of works. Blancpain stuck with the traditional triple calendar moonphase configuration, with the day and week near 12, a pointer date indication, and a large moonphase indication at 6 o’clock. This is a configuration the brand has been using for some time now in the Villeret, though to make it work in the Bathyscaphe is a relocation of its pointer date track. Rather than having this indication at the outer perimeter of the dial, it has been moved inbound of its hour indices. This helps ensure that its minute track is free of clutter when its timing bezel is in use. 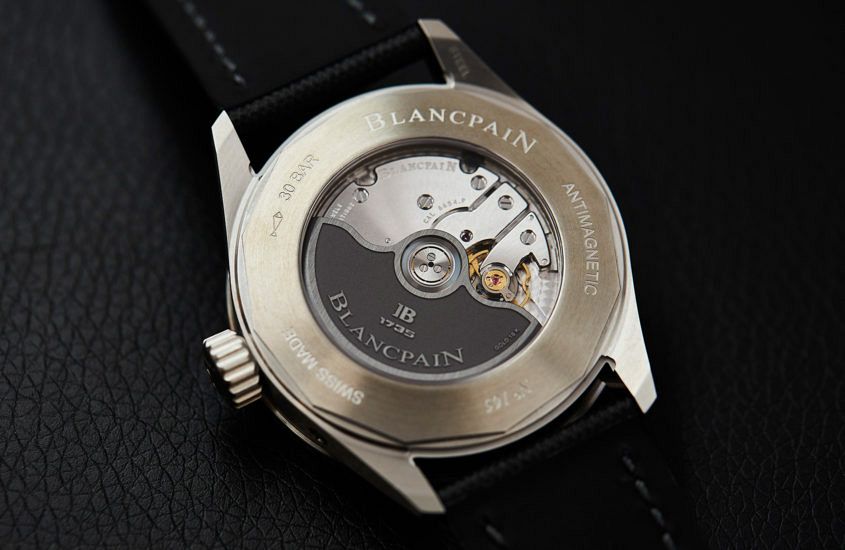 As we’ve mentioned, this is a complication the brand has been using for quite some time, and the caliber 6654.P is by no means a new addition to the brand’s repertoire. That said, it’s a well-executed caliber, good for a power reserve of 72 hours, and fitted with a blackened 18k gold decorated rotor. A minor tweak was required to relocate its corrector pushers to the side of its case (rather than between the lugs, as we see in the Villeret line), but otherwise this is a case of grab a caliber from the shelf and find it a new home.

The Fifty Fathoms Bathyscaphe is one of those watches that quickly reminds its wearer that case diameter spec is not a good benchmark of how a watch will be on the wrist. At 43mm across, I wasn’t expecting it to be quite as chunky on the wrist; however (thankfully), it still wasn’t overpowering. The piece was launched on bracelet, NATO, and a sailcloth canvas, the latter of which has consistently proven very comfortable. Its bezel action is as expected from one of the most well-respected dive watch manufacturers out there, and the same can be said for its brightly glowing Super-LumiNova indices. 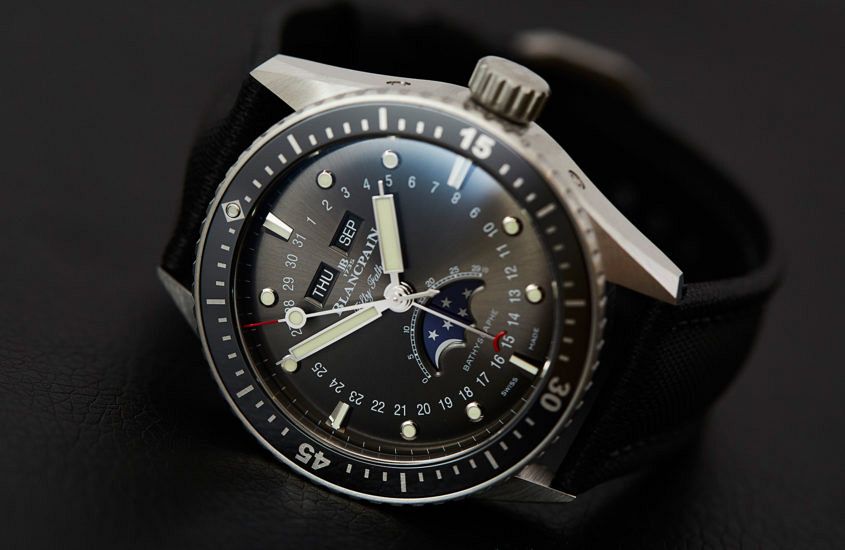 Spending some time with the Complete Calendar Moonphase, to be frank it took some time for me to warm up to it. Aesthetically, it’s a mighty sharp looking piece, and I’m a fan of how well executed the calendar complication was integrated into a dive watch. At its root, the hangup is entirely the melding of a dress watch complication and a tool watch case. That said, I soon realised how foolish the hangup was. Crossing design codes is something I’ve often encouraged in other categories, and once again acknowledging that this new Blancpain is not meant as a pure tool watch per se … where’s the real harm, right? It’s a sharp-looking watch, it has practical complications, and it’s built to Blancpain’s exacting standards. This is certainly worth a second look if you’re in the market for an out-of-the-ordinary diver from a legacy brand.