Editor’s note: For years, Bell & Ross has stuck safely to the skies. Then, in 2017, they came for the oceans. And we could not be happier with the switch up. The Bell & Ross BR 03-92 Diver is a smooth evolution of the brand’s famous form …

The story in a second: The Bell & Ross BR 03-92 Diver transitions smoothly from the sky to the sea.

In the time I spent with the Bell & Ross BR 03-92 Diver I came to think of it as an armoured car. Not the conspicuously bulked-up and blinged-out vehicle beloved by the A-list, instead this diver is more akin to the subtly strengthened Land Cruiser, one that looks significantly like the regular model, but can handle IEDs and assault rifles. To me that’s what this Bell & Ross is — a super tough take on the brand’s famous instrument watch. 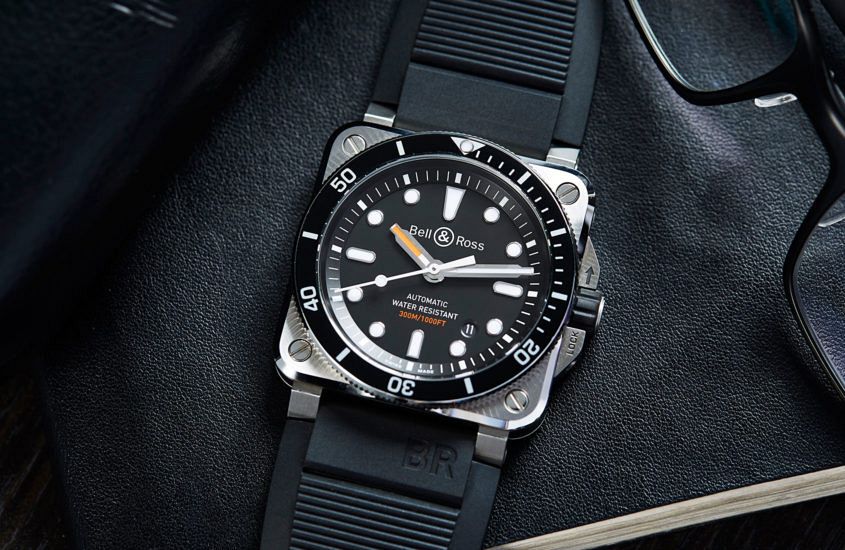 It’s the case that really earned the armoured car analogy. From a quick glance, the BR 03-92 Diver shares the same 42mm steel case, but look closer and you’ll notice that quite a lot has changed to earn that 300-metre water resistance rating. The sapphire crystal is significantly super-sized, at 2.85mm thick, and the caseback, with its four screws, is a millimetre thicker than regular, non-diving models. And while these modifications would go largely unnoticed, the block crown guards and solid unidirectional bezel give the dive watch game away. 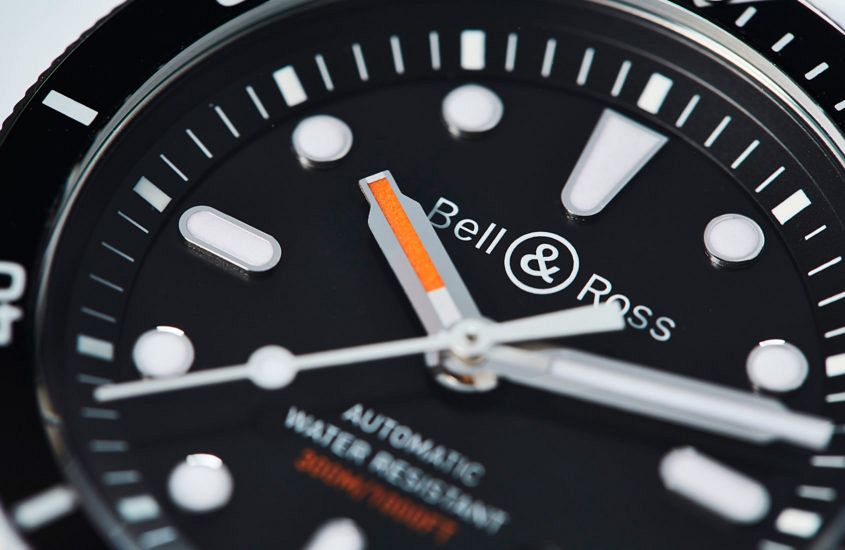 Bell & Ross dials have always prioritised function and legibility, and this diver is no exception, even though the execution is a little atypical. Instead of the more traditional Arabic hour markers, this watch has the system of dots and dashes that is fairly stock in trade for the diving genre. Similarly, the hands are relatively simple and straight, with ample lume. The hour hand is distinguished in orange, to avoid any confusion underwater. There’s a lollipop pip on the seconds hand — another requirement of the ISO standard for dive watches, allowing you to quickly see that your watch is functioning in low visibility. That subtle date at four isn’t required, but it is handy. 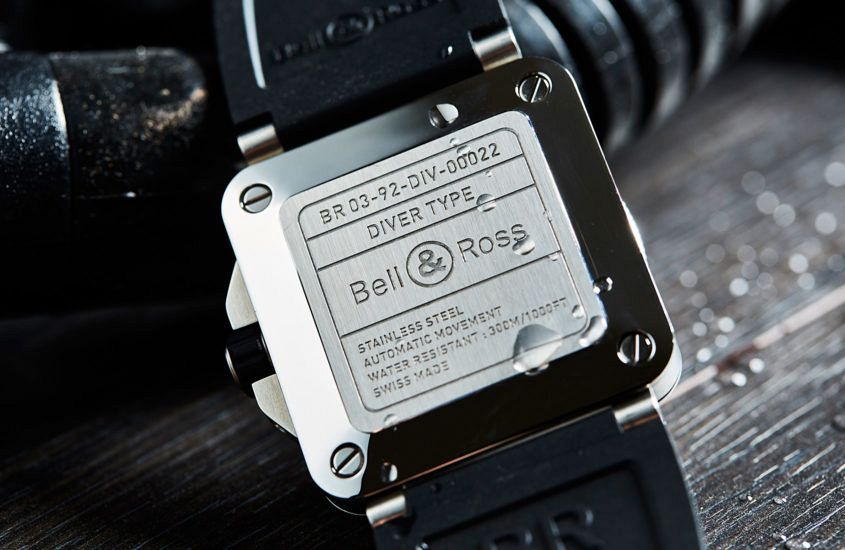 The theme of tried, true and tough extends to the movement, as Bell & Ross has opted for the SW 300 to power this watch. Given the price, and the fact that the movement is hidden away, it’s an absolutely understandable choice. The movement is shielded from magnetic influence thanks to an iron cage. 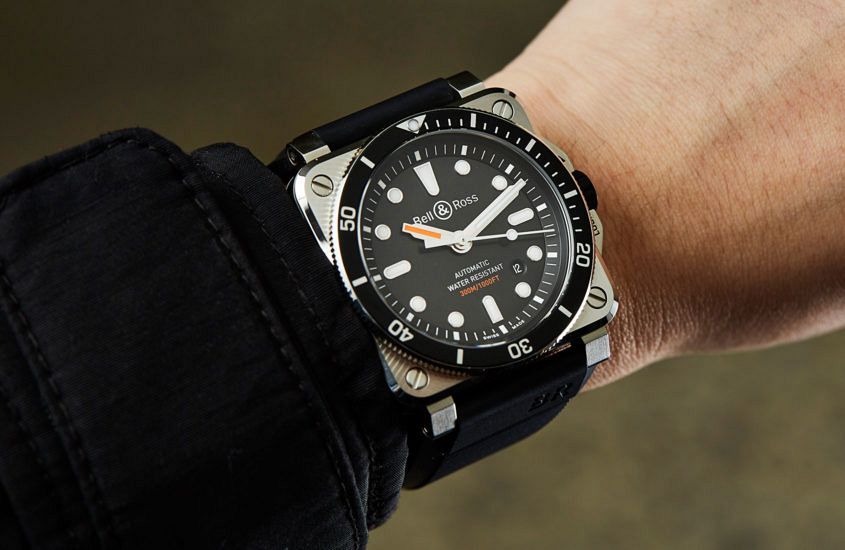 Heavier than you’d expect. Bell & Ross’ instrument watches have never been delicate on the wrist, but this diver really amps up both the weight and the visual impact. The stubby lugs and wide rubber strap make it a comfortable wearer, and not too top-heavy. 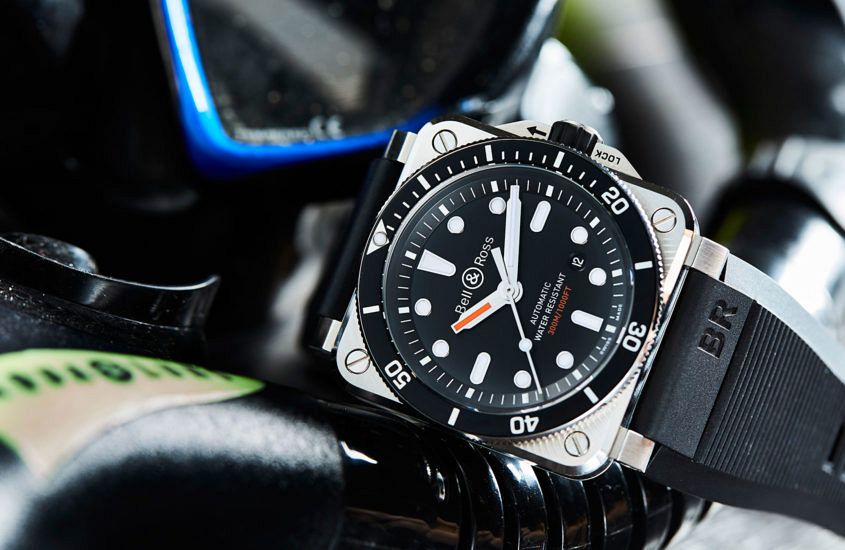 As I said in my video review, my initial surprise at a Bell & Ross quickly transformed into surprise that we hadn’t seen a square diver earlier. Square divers are pretty uncommon, and offer a nice alternative to the parade of circular models that we usually see. I think it’s a really strong move from the brand and one that opens up some interesting new doors for future collections.

Oh, you thought Bell & Ross only did dive watches?

Looking for a square diver in a round world? Say hi to B&R.

I do think that ‘Lock’ text on the crown guard is a little unnecessary.