Audemars Piguet’s Royal Oak Concept line can easily be not just confusing, but confounding when you first come across it. The case shape is so alien … who is it even made for? When the first Concept was released in 2002, it more resembled a piece of lab equipment from a sci-fi movie than a watch, which is a topic Andrew discussed with Michael Friedman, Head of Complications at Audemars Piguet, recently in a lively Zoom call. Over the last 18 years, the Concept has undergone many changes, and, in the process the Concept enigma has deepened rather than crystallised. However, the collection slowly begins to make sense once you understand its purpose.

The watches, which truly represent the pinnacle of modern technology and design, are few and far between, often acting as a compromise between new-world manufacture and old-word principles. The Concept is for the now, and now we have the latest addition — the Audemars Piguet Royal Oak Concept Flying Tourbillon GMT in blue. 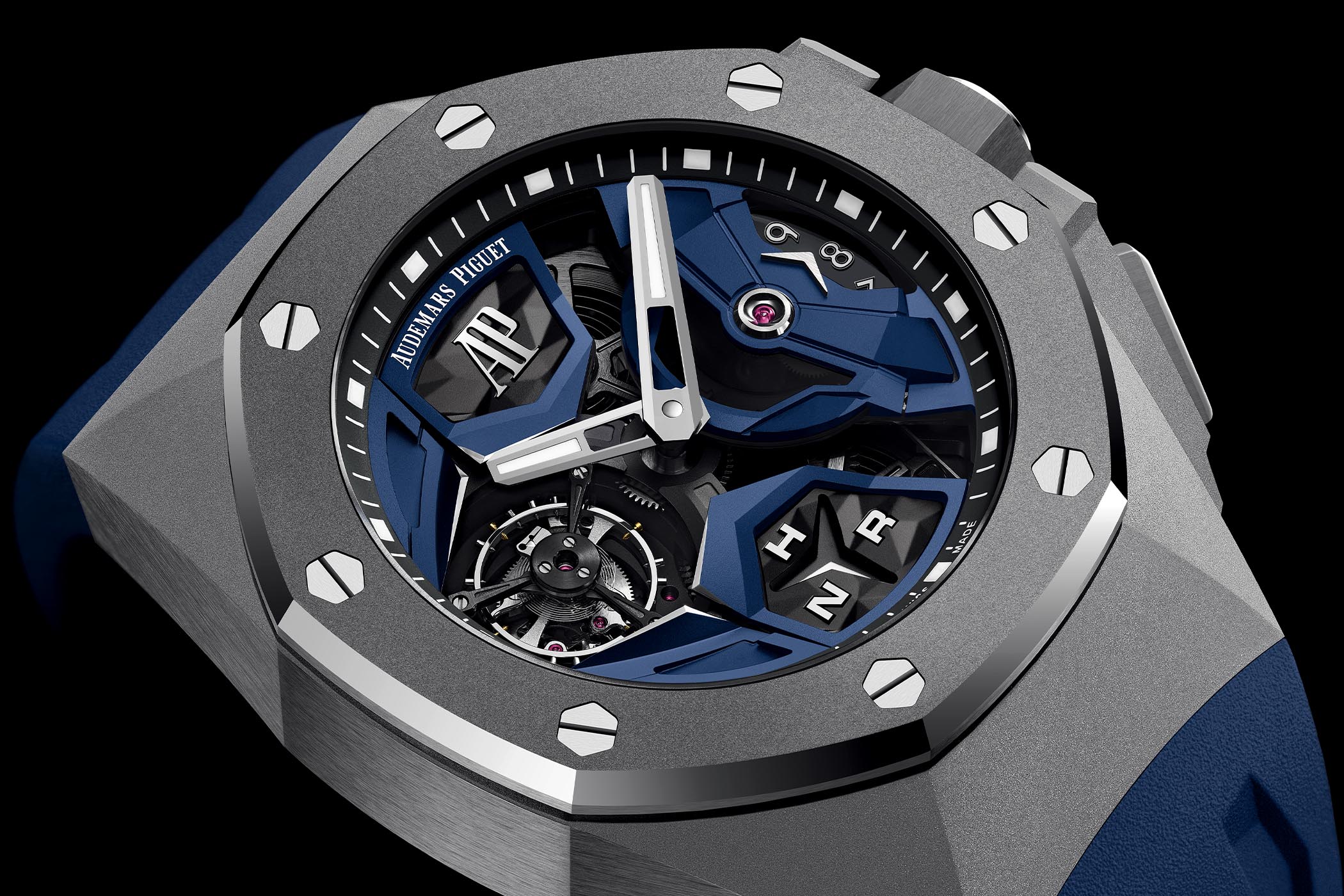 Calling what encapsulates the watch a ‘case’ feels like a massive disservice. Its architecture is so deliberate and sculpted that it deserves something a lot closer to ‘fortress’, or ‘eighth wonder of the industrial world’. The material is a dark charcoal titanium, with sandblasting on its front-facing surfaces giving it a texture reminiscent of a PVD coating. The mirror-polished bevels on the perimeter of the bezel distinctly reaffirm the lines of the watch, ensuring that its brutalist architecture isn’t lost within a flurry of detail.

Refreshing contrast comes in the form of the lighter-shaded bezel screws, also acting as a stable reminder of the Royal Oak roots. The case sides are aggressively brushed, deep grooves leading your eye across to the intricately stepped chunk of hardware which is the crown and pusher guard. A huge part of what cements the Royal Oak Concept as a modern watch is its tactility, and you certainly find that here. 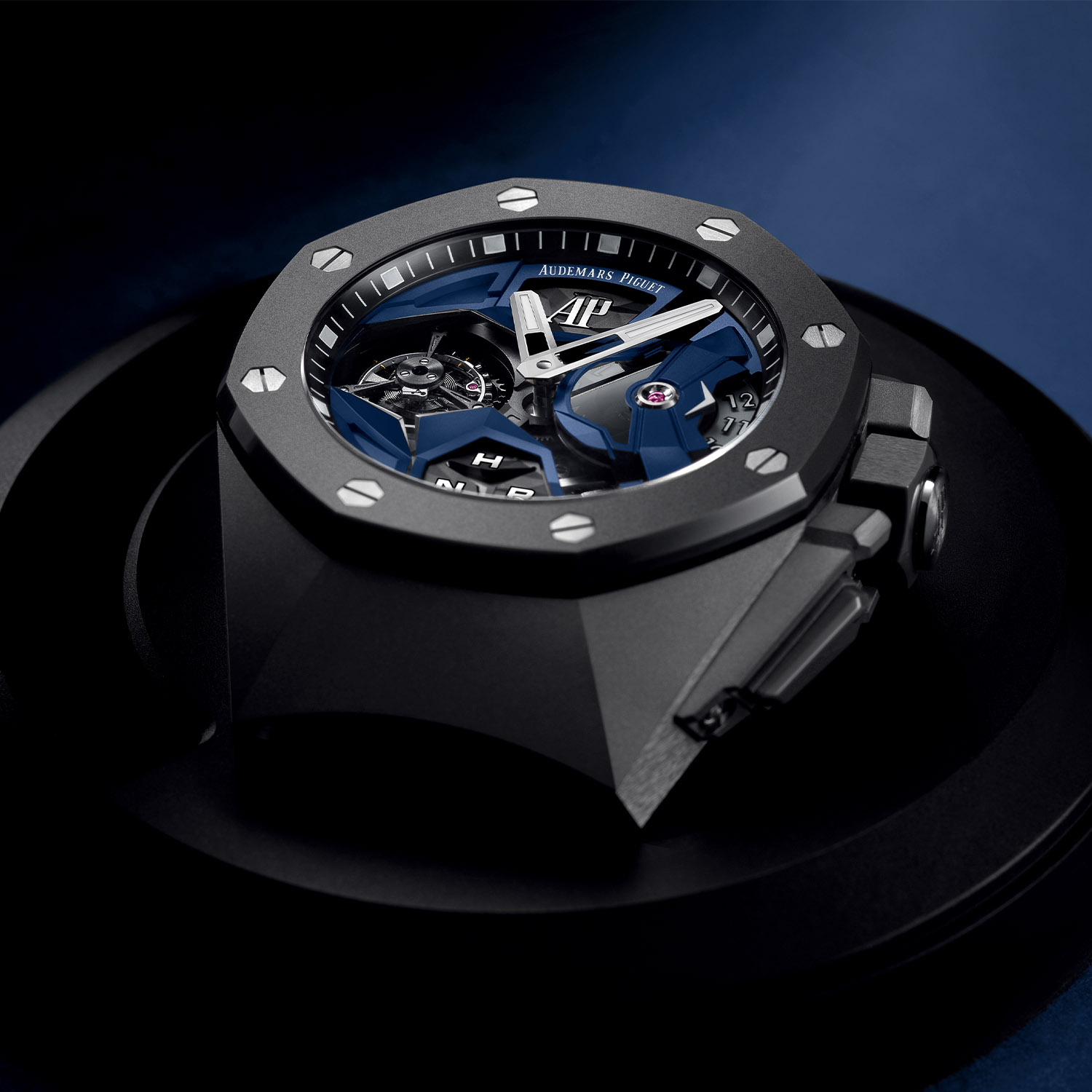 It’s hard to imagine something so asymmetrical appearing so balanced, but the Concept’s openwork dial hits the nail on the head. Part of the Royal Oak Concept’s ethos is tearing down the barriers between the case, dial and movement, and that’s absolutely achieved. It’s a far cry from what was once the sci-fi spectacle of the original 2002 Concept, yet somehow still captivates the viewer in a similar way.

Firstly, the tone of the blue complements the smoky titanium perfectly, and sharing the same sandblasted finish helps keep the eye undistracted from the large, legible handset. Beneath the futuristic beams and platforms, the workings of the movement twitch and flicker away, giving the impression of a living and breathing machine. Small pops of symmetrical colour are introduced, with the reddish-pink bearing jewels at the centre of the tourbillon and GMT display wheel, a key example of form meeting function. 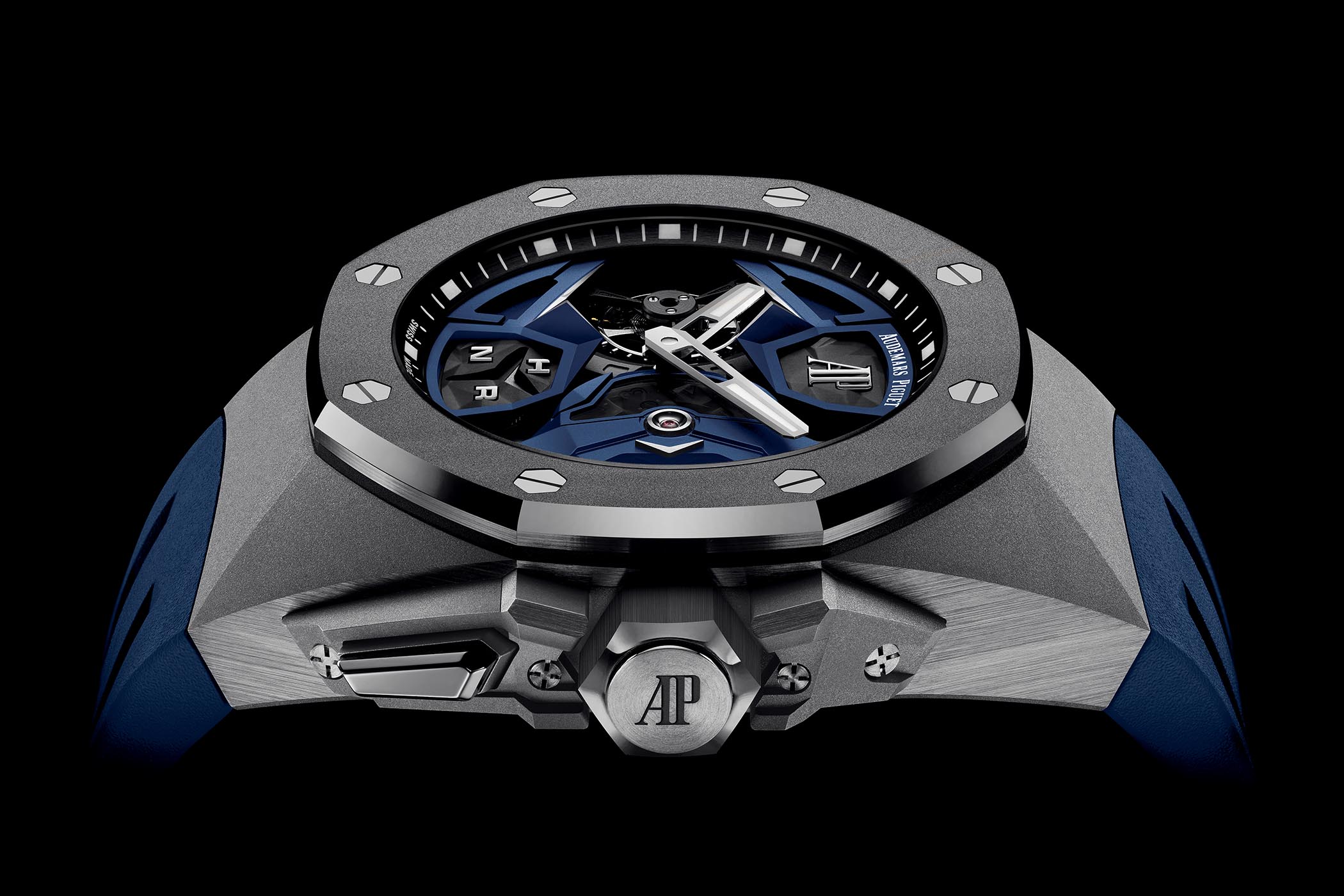 The elephant in the room is the matter of size, and why a 44mm diameter hunk of metal needs to take up so much presence when most of the market is currently returning to a 38-40mm sweet spot. There are two main reasons for this — one emotional, and one technical.

The technical reason is not just that the complications take up a lot of space in three dimensions but that, with more space, a watchmaker has more opportunities to flex their talents. When everything is bigger, it’s so much easier to appreciate all of the detailed hand-finishing, and more chances to get a glimpse into the impressive movement.

Emotionally? The Concept’s personality is not shy — it demands to be seen. It doesn’t matter if the highly curved case and lug design doesn’t quite fit within the confines of your wrist, or if the 16.1mm thickness can’t slide beneath a dress cuff, because subtlety has never been in the Royal Oak’s vocabulary, nor should it be. 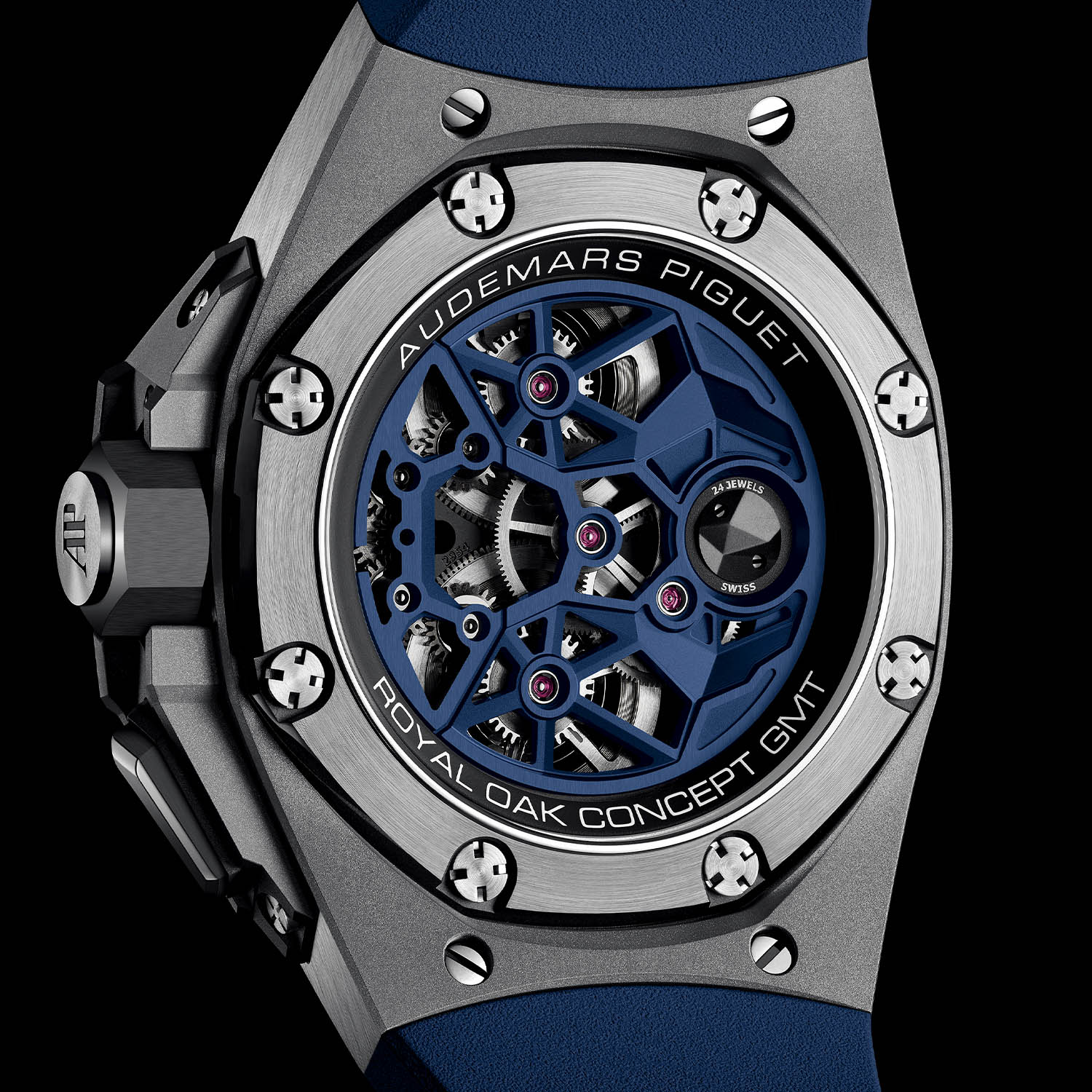 In terms of the movement, the Calibre 2954 is just as much an engineering feat as it is an artistic one. The GMT 12-hour wheel at 3 o’clock is printed on a sapphire disk, which rotates and allows you to read the hour of another time zone. Two gigantic mainspring barrels work together to create a large pool of power reserve, which the escapement translates into 237 hours of running time at its slowed-down 21,600vph beat rate. Probably the most mysterious part of the dial, and the furthest away from traditional watchmaking, is the crown position indicator at 6 o’clock. The push-button adjacent to the crown acts somewhat like a car’s gear shifter, as it flicks between letters representing the French words for different functions: ’N’ for Neutral, ‘R’ for hand-winding, and ‘H’ for setting the time.

As impressive as the Royal Oak Concept Flying Tourbillon GMT is, there’s almost nothing you can say about it that it doesn’t exclaim itself. You could mention how well the textured bracelet integrates into the sandblasted case, and you could hark on for weeks about how advanced the movement is, with its 237-hour power reserve and display caseback that is almost as attractive as the dial, but nobody is spending $198,400 USD just to know what time it is in New York. This is a big watch with a big personality, and if there’s even the smallest grain of doubt in your mind as to whether or not you could pull this off, then it’s probably already sold out. 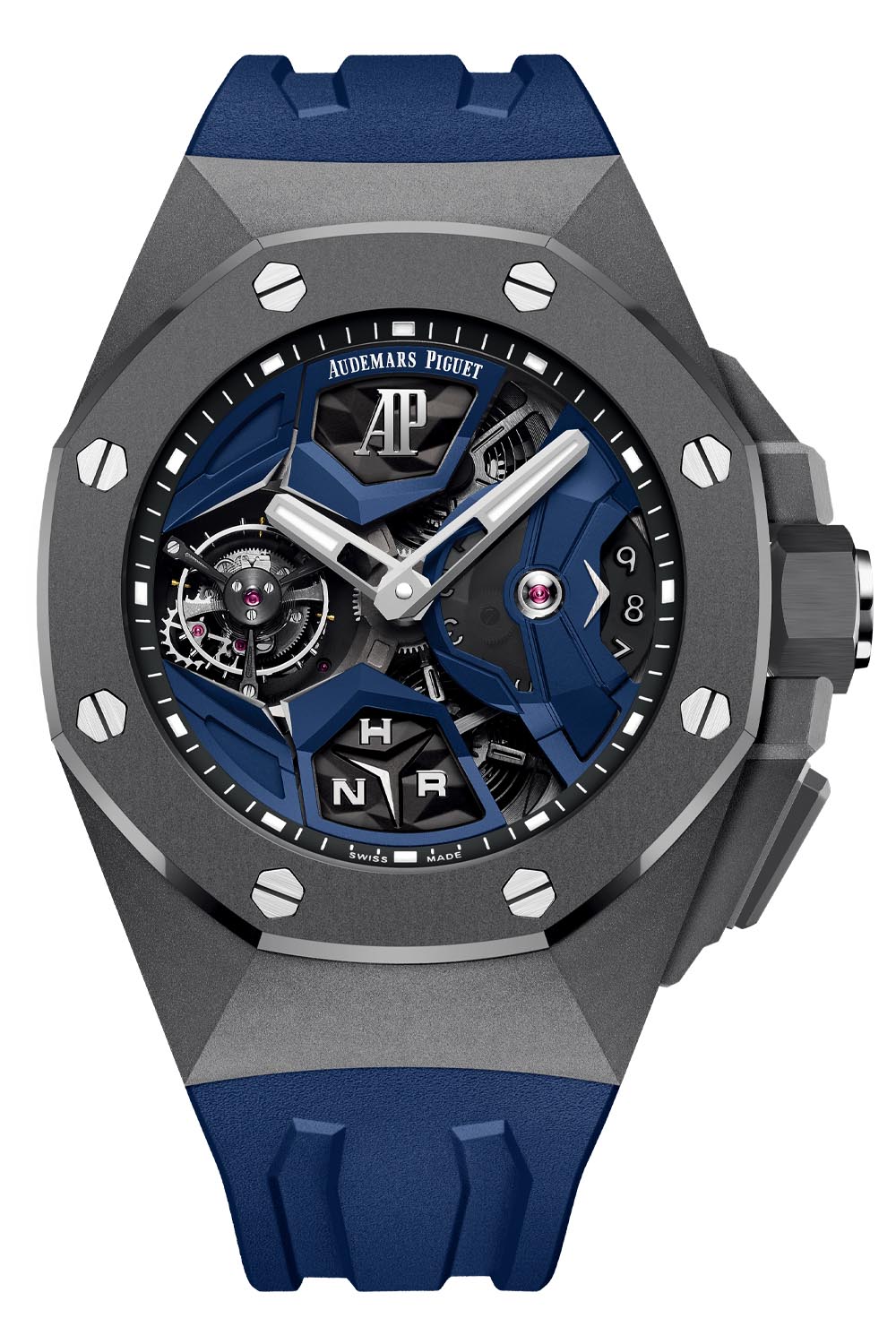