Editor’s note: ‘Modding’ a watch is not a trend in watchmaking, it is a trope. It has, and always will be, a part of the watchmaking and watch-wearing world as companies and individuals seek to personalise and individualise watches. A uniquely modified watch becomes more of a statement. And it offers an alternative to a ‘Piece Unique’, one-off watch. This story is the first in ‘The Modifier’s Series’, which looks at the main players in the modding game. Coming up, MAD, Bamford and more…

For so many of us, Rolex — for all of its flaws — remains the pinnacle of the watch world. While inflated prices may be making the barrier to entry higher, the dream of slaving away for years to finally reward yourself with a hallowed five-pointed crown is still very much a thing, and a universal marker of success. To those who have already achieved this dream, maybe even multiple times, the question becomes: what next? Sure, you could go for some precious metal, haute horology, minute repeater, dual-axis tourbillon which costs as much as an average Monaco apartment. Or you could have the timepiece of your dreams personally crafted by Artisans De Genève. 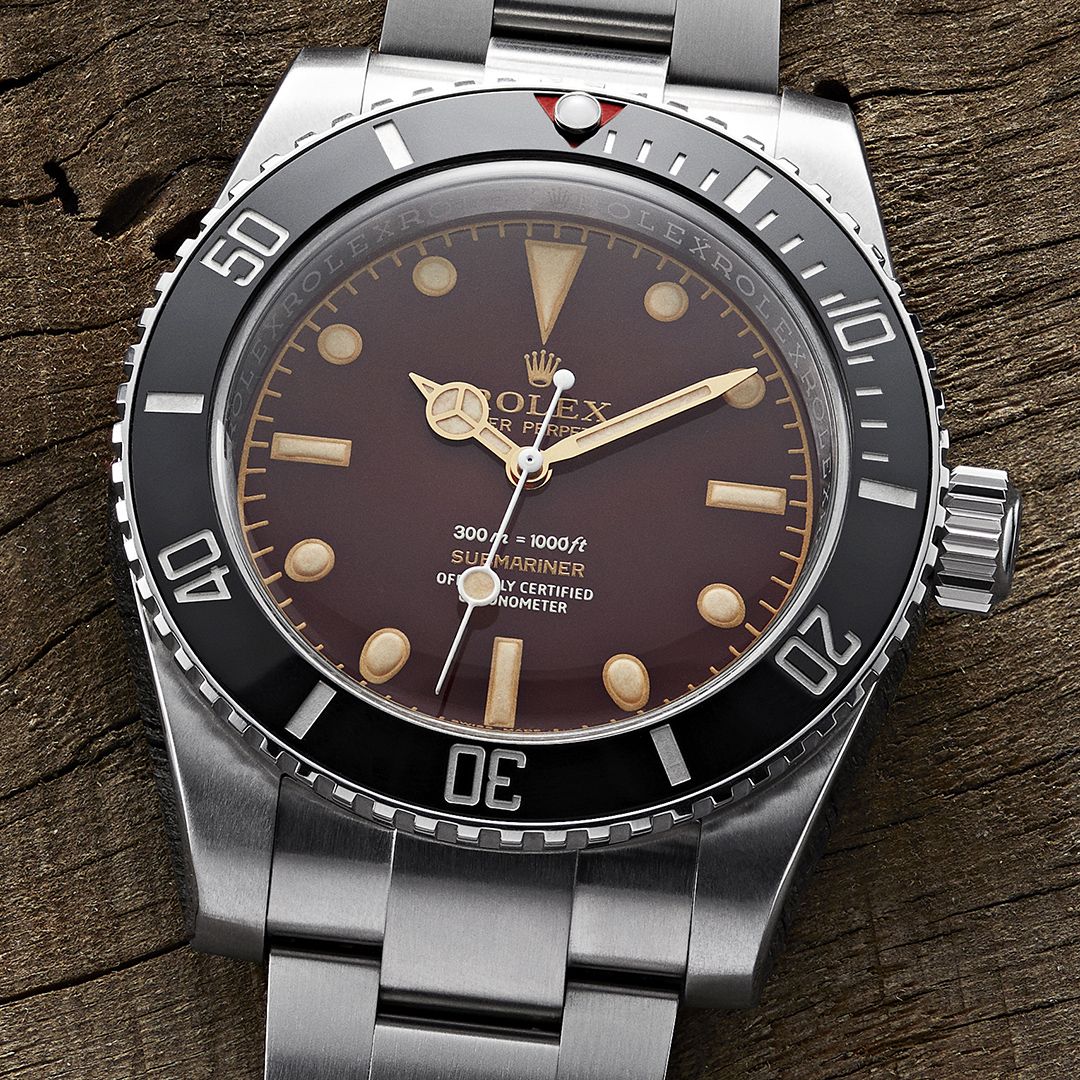 Since 2005, Les Artisans have been cautiously avoiding Rolex’s infamous litigious gaze by customising pieces for individual clients, rather than selling them in a store. Favoured by sporting stars and artists alike, the bespoke watchmakers combine traditional Swiss techniques with modern technology’s latest and greatest, to strip, remodel and transform standard Rolex bases. Whether as an homage to some particularly rare and un-buyable references or to create a unique skeletonised marvel, Artisans De Genève are guaranteed to stun even the most staunch Rolex traditionalists. 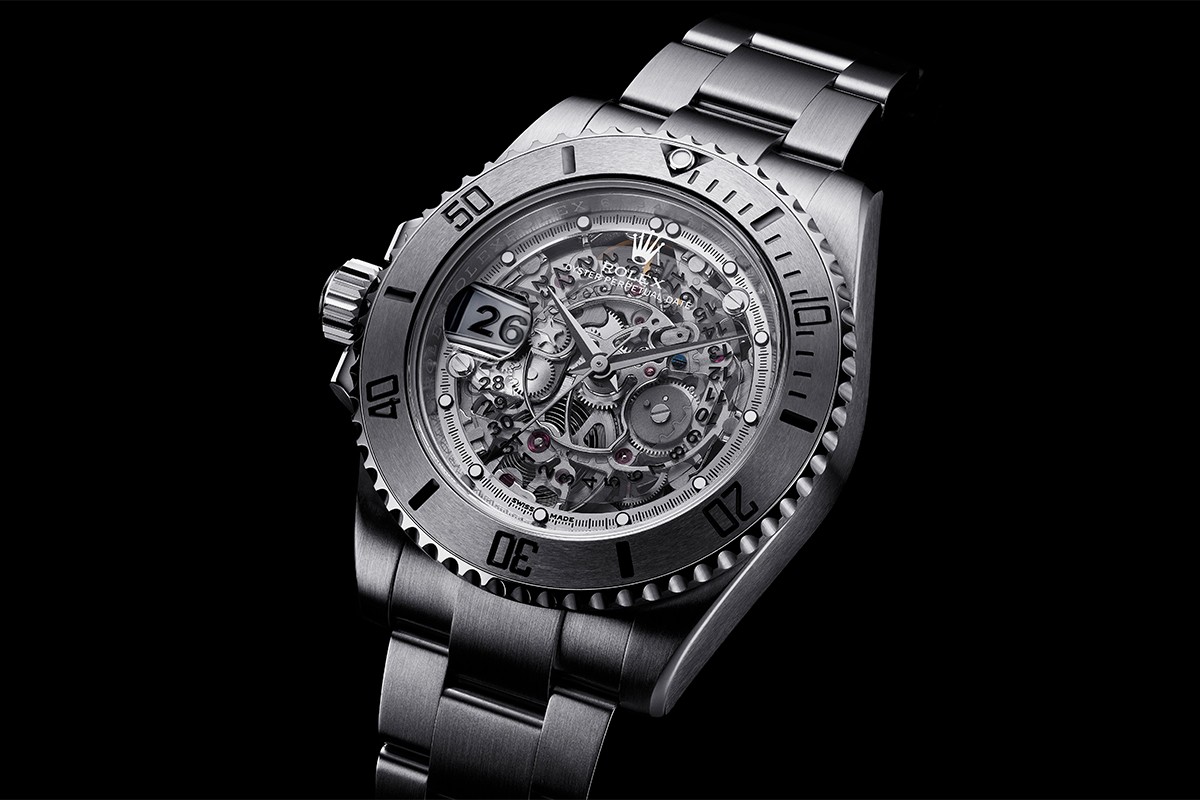 The Swiss workshop’s latest publicised project is an outrageous watch for one of tennis’ most outrageous figures, John McEnroe. Not only has the reference 116610 Submariner Date been entirely skeletonised, but the watch has been rotated 180 degrees so that it can be worn on the right wrist, with the crown still easily accessible. The secret to this technique? Simply turn the watch upside down. Compared to their ‘standard’ skeletonised Subs, the dead giveaway is the mainspring, which has moved from the top right quarter of the ‘dial’ to the bottom left. Of course, it’s not as easy as it sounds. A reversed sapphire date-wheel has been installed to both let more of the movement be seen as well as having the numbers the correct orientation, and the dial inscriptions and crown logo have been relocated to the underside of the crystal. The new brushed-tungsten bezel insert and thin chapter ring, with miniaturised luminous pips, replace all other dial information which otherwise would have betrayed the flipped diver. Don’t worry, John, your new watch is without doubt on the line.

The Tribute to 6163 Albino Project 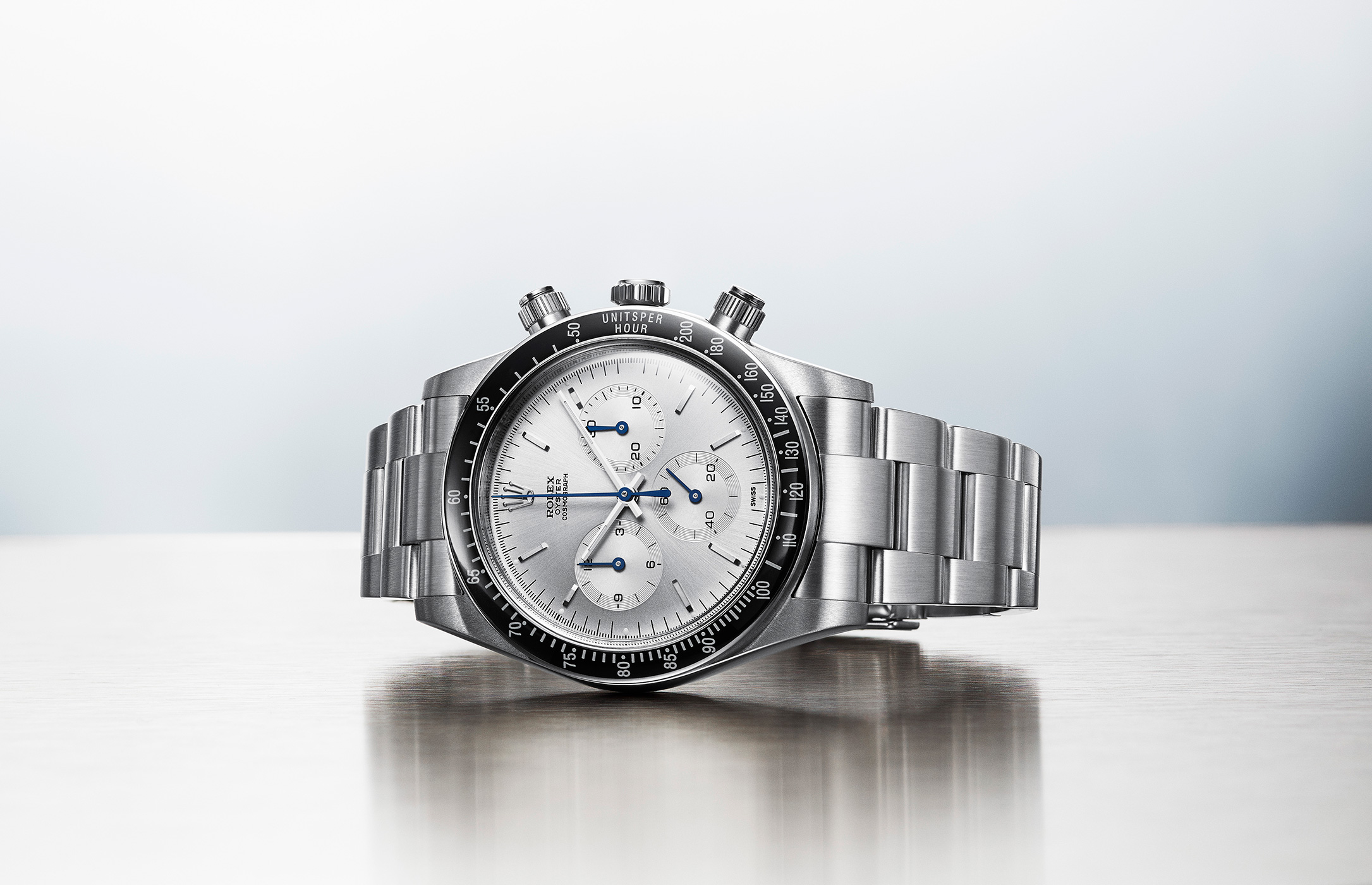 When hearing the term ‘modified’, it’s easy to assume complexity is at the heart of the operation. Whether it’s removing chunks of the dial to reveal the busy balance wheel dancing away, or even just adding hacking seconds to that beloved affordable Seiko, the last thing you expect a modification to do is to make a watch more simple. The Albino — of which five, or fewer, are believed to exist — is a breath of fresh air in comparison to the modern 116520 reference from which the Tribute is made. The wide teardrop indices are replaced with thin brushed batons, relegating the mass of Super-LumiNova to elegant pips around the minute track. Four lines of text distract you from the time on the plain white enamel dial of the modern Daytona, while the Albino’s simple ‘Oyster Cosmograph’, printed upon silver sunburst, lets the heat-blued and subdial-specific hands speak for themselves. The final touches of a bakelite bezel and removal of the caliber 4130’s automatic winding solidify the vintage charm, although the modern luxury of a display caseback lets you bask in the craftsmanship lovingly applied. 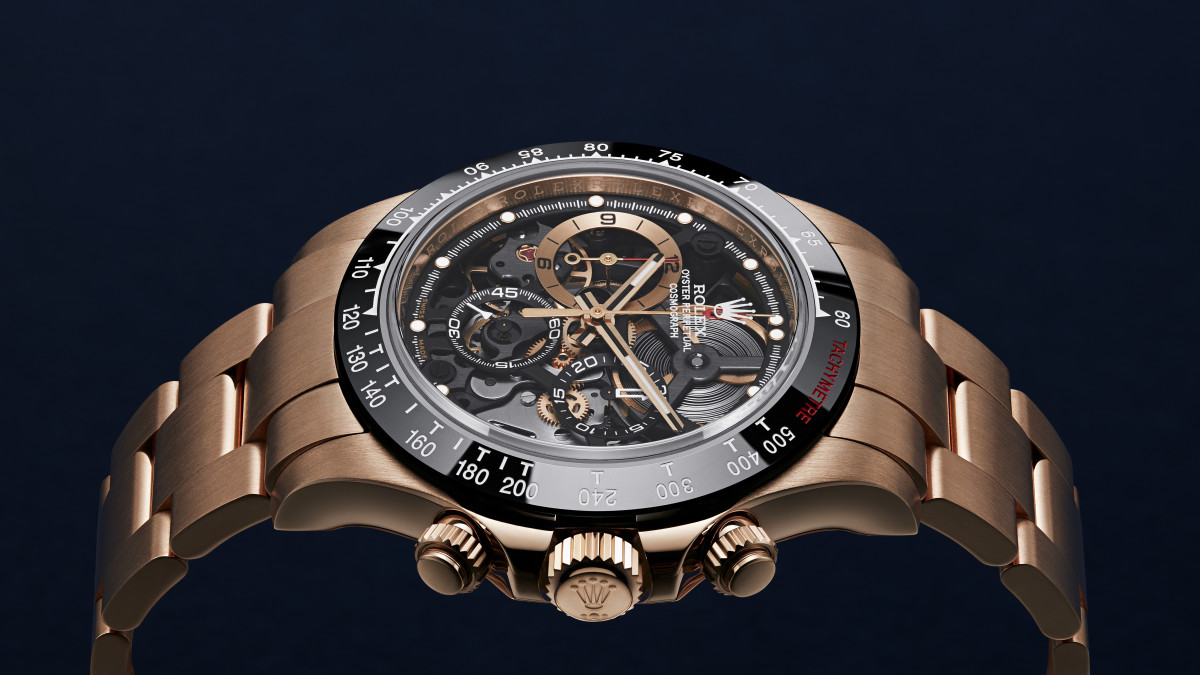 Having already completed one custom Daytona for racing legend Rubens Barrichello, Artisans De Genève were tasked with another in 18-carat rose gold. Well known for his prowess in the technical side of motorsports, Barrichello wanted his watches to express the same level of highly finessed engineering to which he was so accustomed from the cars in his extraordinarily long career. To stop the parts in the automatic chronograph caliber 4130 from blurring together, contrast was added in the form of black diamond-like coating. From the back, two red wheels can be spotted, surely a nod to Barrichello’s hallowed time at powerhouse marque Scuderia Ferrari. Mismatched sub-dial rings from different variations of the original reference 116505 Daytona, and a new ceramic bezel with a dash of red text, all add to the project’s evocation of motorsport’s cutting-edge machines.

The Tribute to 6536 Brown Project

Vintage tributes are nothing new in the watch world, however the Tribute to 6536 is truly breathtaking, if somewhat bizarre. The most glaring difference is of course the completely reworked dial, having been aged in both luminescence and lacquer, giving it that brown hue as though left out in the tropical sun for years on end. Chunky white-gold indices have been ditched for more flat, yellow gold print the same as the minute track, which really accentuates the depth between the dial surface and the crystal. The bezel has been replaced with a less aggressive knurling and red 12 o’clock marker, while the crown guards have also been unceremoniously shaved away to let the crown stand proud. The oddness comes into things with the base reference 114060’s ‘maxi-case’, and although 40mm is by no means too large for a modern wearer, it is incredibly strange to see that Rolex-engraved rehaut on a watch that otherwise embodies the 1950s. 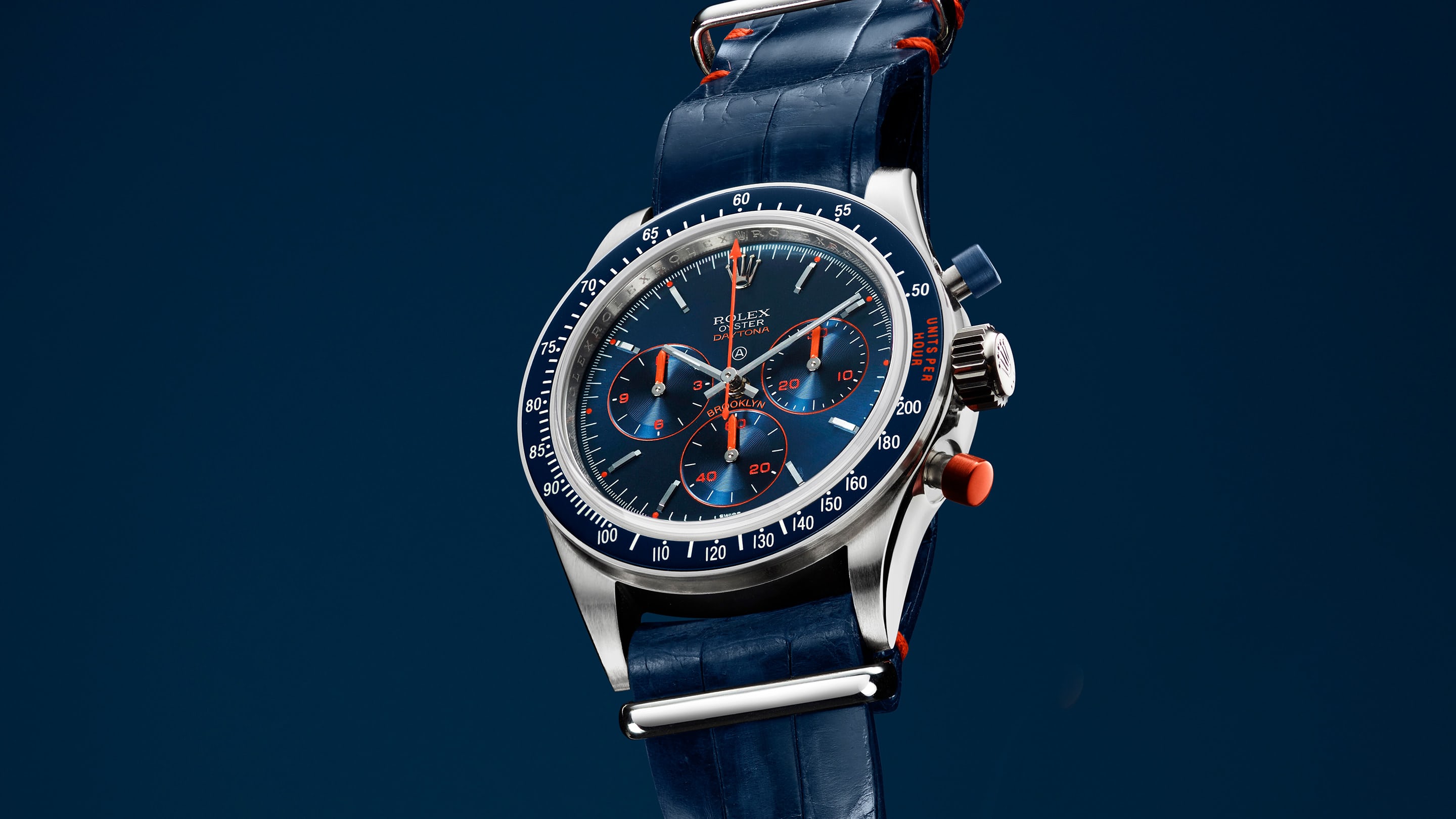 Few of the Artisans De Genève collaborations reflect the character of their owners as much as Spike Lee’s Daytona. Absolutely awash in the orange and blue of New York City, lifelong Paul Newman fan Lee wanted to combine his deep love of film, Rolex Daytonas, and hometown Brooklyn. From the base 116520 reference, gone are the metal bezel, white dial and chunky indices, making way for a deep blue bakelite bezel and dazzling sunburst navy dial spotted with red accents. The red Daytona script, too, has been replaced with the Brooklyn which means so much more. Perhaps the most unique aspect of this piece is the ‘Cool Hand’ strap, a handmade NATO entirely crafted from gloss-blue alligator leather. Artisans De Genève made sure that this project stands out from afar, by any means necessary.