Tudor S&G this, Patek 5172G that, but wouldn’t you rather have something … different?

Year after year it’s the same story. News breaks in January and March, and all you hear about are these “hero watches” from brands X, Y, and Z time and time again. Sure, that’s cool, and there’s a reason there is immense buzz around certain pieces (another limited edition Speedmaster, oh my!), but this hype is precisely why so many cool watches wind up going unnoticed and underappreciated. Once again, that’s why I’m here. My tastes consistently run somewhere out in left field, leaving me to consistently appreciate those watches that seem to be either missed or simply unloved by the horological media machine. With that in mind, here are the pieces that have been on my radar so far this year. 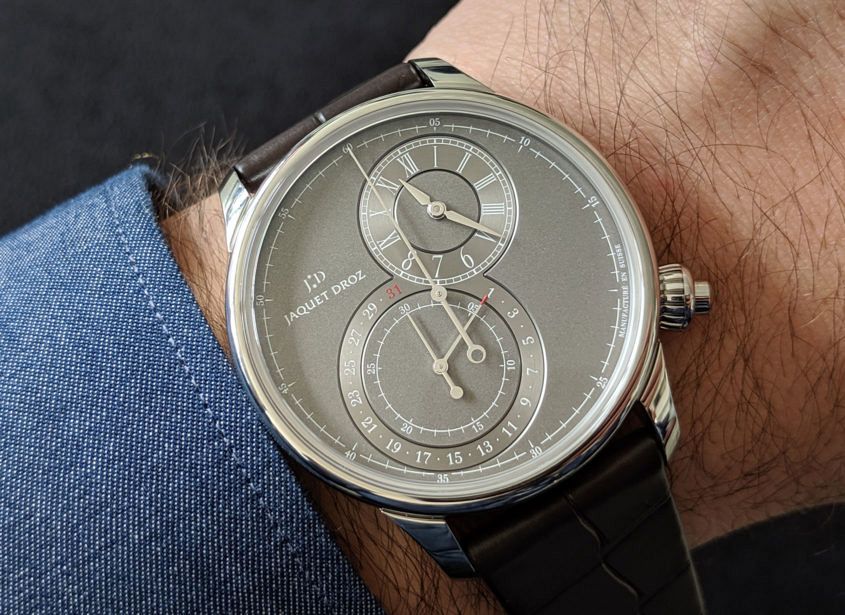 Why this watch got no attention this year is still beyond me. Though there have been other chronographs in other collections over the years, this is the first monopusher, as well as the first time in recent years that the complication has landed in their dressy Grande Seconde collection. At 43mm, she’s a bit chunky for a dress watch, but it’s still one of the more interesting releases from the brand in years. A keen eye will notice a retrograde date function that works around the time subdial, as the date ring was pushed outward to account for its 30-minute timing register. 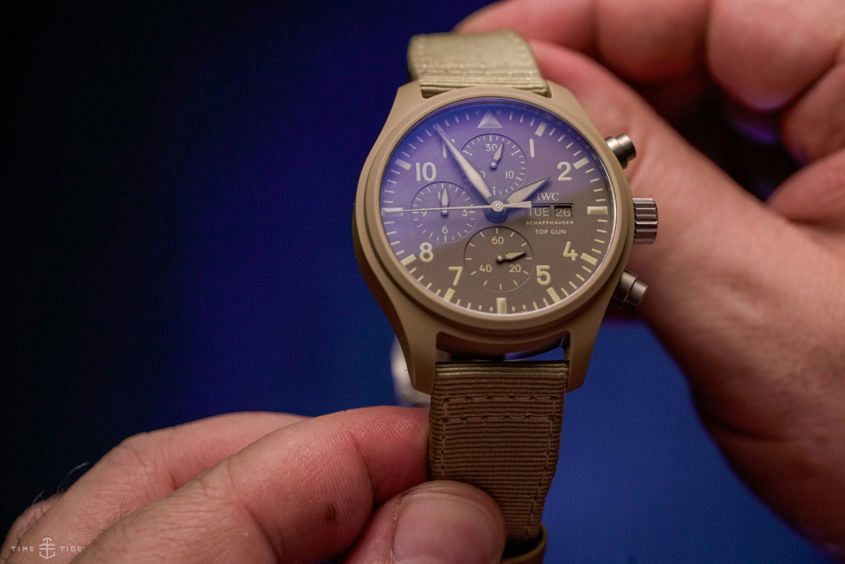 There were a lot of Pilot models on offer from IWC this year, but there’s something so different about the monochromatic military vibe of this Top Gun (ref. 3981) that it caught my eye the second IWC’s SIHH announcements came out. Sure, it’s not quite as legible as their more traditionally designed pilot’s watches, but it’s also miles more unique on account of its ceramic case not being the usual boring black so often seen from IWC. Personally, I’d argue it’s the most badass Top Gun to surface in years. 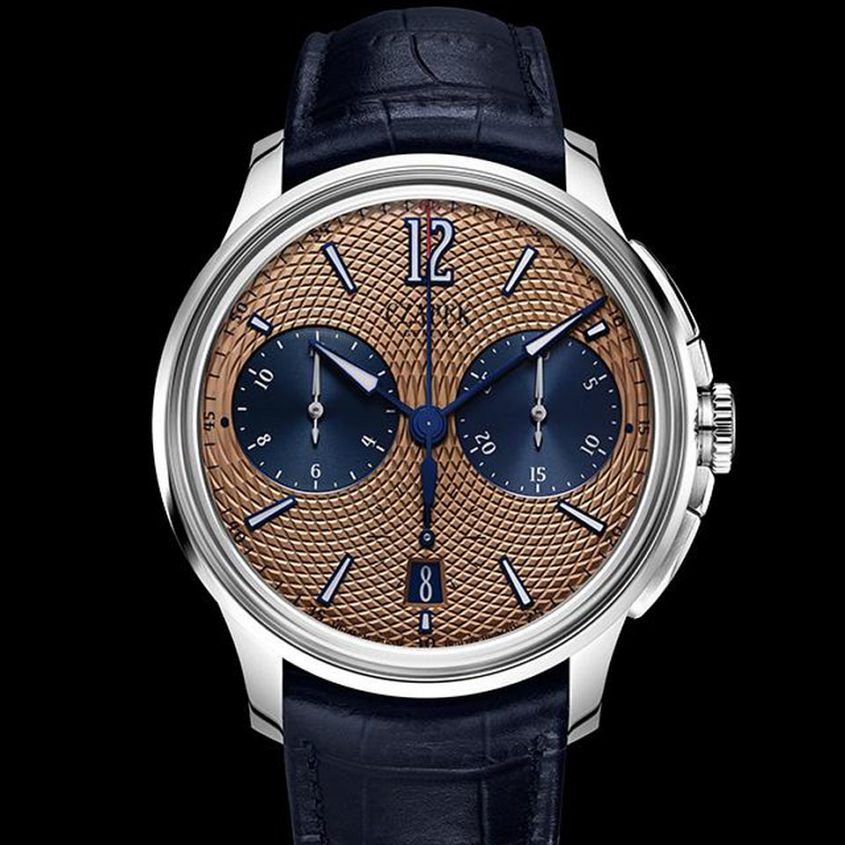 Czapek further expanded on its Faubourg de Cracovie chronograph line this past year, and though my initial intent was to include the enamel Panda dial in this list (sold out now, sadly), my inner horologeek couldn’t resist including one of their series of Salmon dials. Four variants were launched for 2019, all named after different salmon species — King, Coho, Chinook, and Sockeye — each limited to an 18-piece production run. Sexy hand-guilloche dials aside, these chronographs run a very high-spec self-winding movement produced exclusively for Czapek by Vaucher (a variant of their VMF 6710). Running at 5Hz (à la El Primero), the calibers uses a linear reset hammer (a single slide that resets all chrono functions simultaneously), and a vertical clutch. Fun fact: none other than Peter Speake-Marin refers to the VMF 6710 as the most sophisticated chronograph produced today. At a specs and finishing level, this is one of the coolest chronographs out there right now, and this coupled with its limited availability easily justifies its 24,000 CHF entry price. 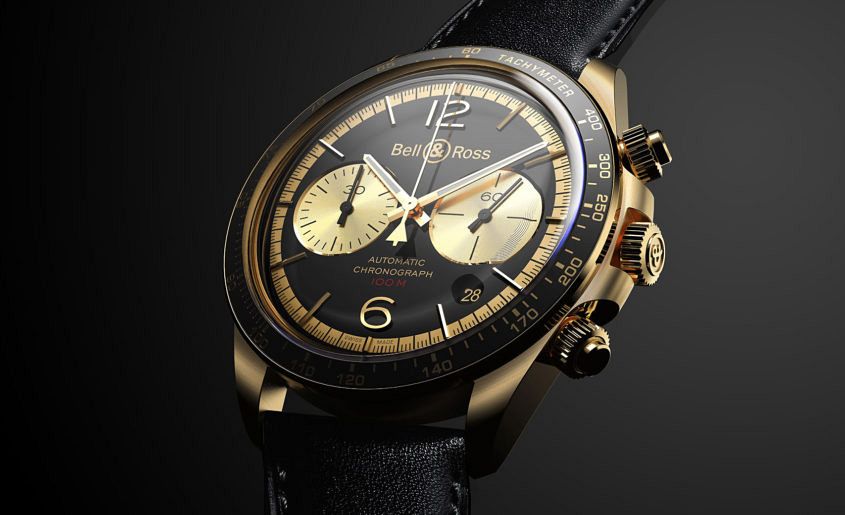 Taking things down a notch, not all underrated chronographs have to cost an arm and a leg. Timing at Baselworld was funny for me this year, which played a minor role in my increased appreciation for this bronze Bell & Ross. I went straight from Tudor, who were busy waxing poetic about their “motorsport inspired” Black Bay Chrono S&G, into the much quieter Bell & Ross booth. This piece wasn’t the first that they rolled out, nor even the third or fourth, but nearing the tail of my appointment it landed on the table in front of me, and I was sold. First off, the slimmer 41mm case of the V2-94 hugs my wrist better than the BB ever will, and second, the combination of a contrasting 2-register chronograph, screw-down pushers, 100m water resistance, and a bronze case for about a grand less than the Tudor makes this a no-brainer for me. Sure, it’s not running Tudor’s in-house chrono caliber, but at this price point it’s meant to be a daily wearer/beater, so serviceability easily trumps the “cachet” or novelty of an in-house movement. 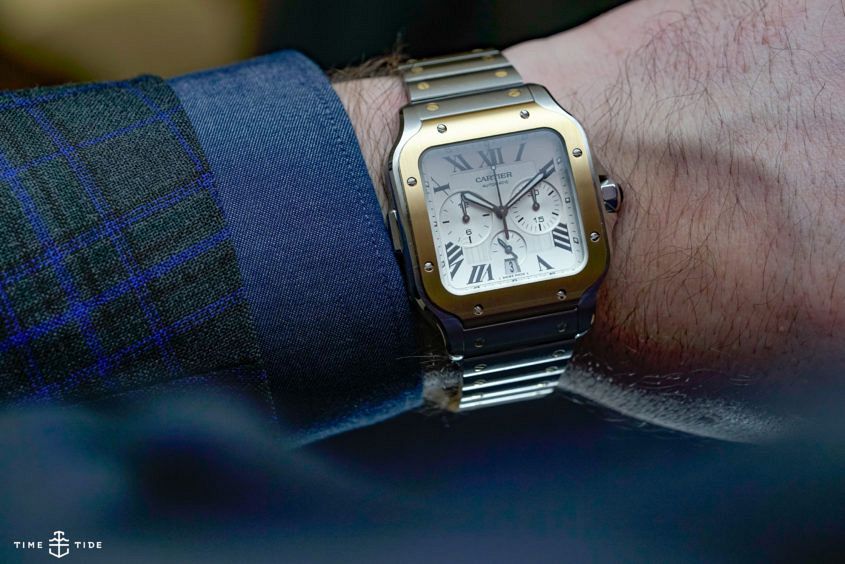 Across the board, Cartier has been cooking up some hot watches in the last couple of years, and I was especially surprised at how much I enjoyed the new Santos Chronograph when I tried it on earlier this spring. While it follows the typical classic/conventional Santos design codes overall — case design and proportions, Roman numerals, and sapphire crystal in its crown — this new version, with a grey ADLC bezel and matching rubber strap, gives the piece a more casual and edgy feel. Adding further uniqueness to the occasion, its 1904-CH MC caliber has been modified to reconfigure its pusher positions. The start/stop pusher is on the left side of the case at 9 o’clock, whereas resetting is completed by pushing its crown. 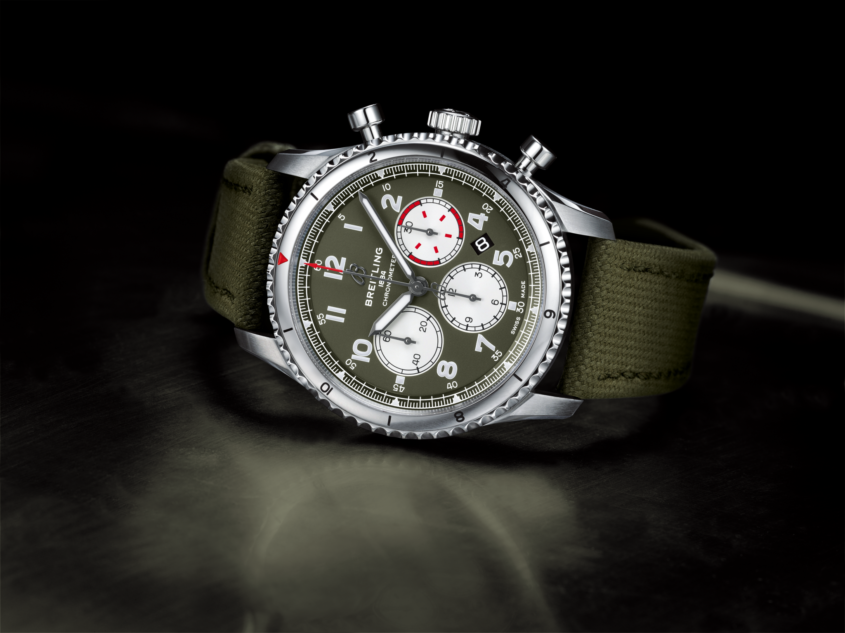 Breitling has been rolling out a ton of new product in the nearly two years since Georges Kern took over, some of which is damn cool, and some of which is a little confusing. In one statement, Kern mentioned a plan to limit the number of models and collections to come from the brand, but the actual product releases say otherwise. Either way, I developed a bit of a spot for the very “military chic” B01 Curtiss Warhawk chronograph when it launched. An olive drab dial, matching canvas strap, contrasting white subdials with red accents, and steel 12-h timing bezel work beautifully together as much visually as they do at a practical level. At 43mm across it’s also got some significant wrist presence without feeling oversized. You might notice that I didn’t note the full name of the B01 Curtiss Warhawk; here’s why: The entire collection that it lives in was launched less than two years ago under the name “Navitimer 8”. Clearly having taken flak for confusing nomenclature, the line now flies under the “Aviator 8” title. Until I know they’ve made up their mind, B01 Curtiss Warhawk gets my point across well enough. 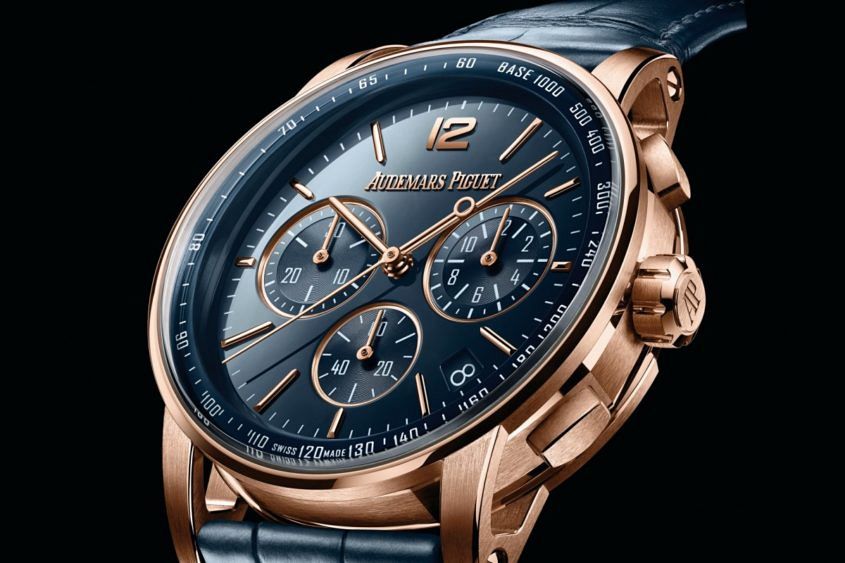 OK, OK, stop screaming at your computer screens and hear me out here … As a single watch on its own and without context, no, I would not be writing about the CODE 11.59. I still believe that AP did need to diversify, and also that they could have done better in terms of overall design aesthetics. That said, what really matters about the CODE 11.59 chronograph is that this is AP’s brand new integrated chronograph caliber, and one that we have to assume is going to work its way (likely in modified form) into the Royal Oak soon enough. Love it or hate it, it’s going to play a pivotal role in the brand’s future, and that on its own is a big freaking deal. 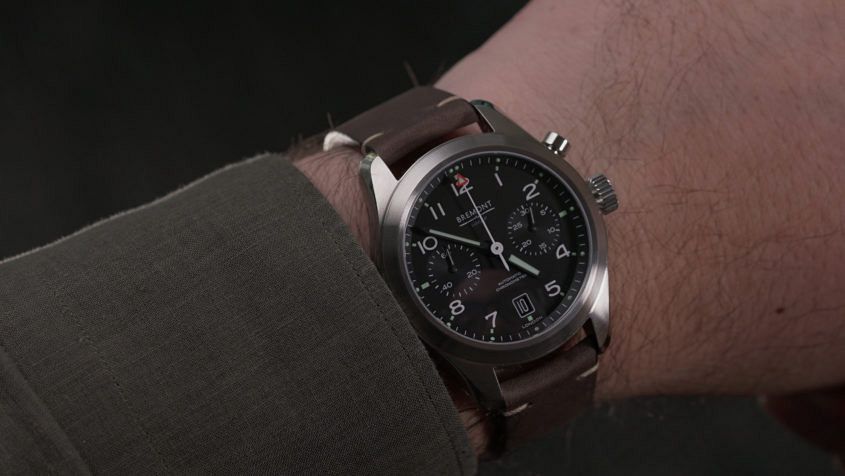 I’ve had a soft spot for Bremont for a while, and even though their new Air Forces collection forgoes their usual unique and much-loved multi-piece Trip-Tick case construction, the fact that they’re offering a rugged 30-minute monopusher chronograph for around 6000 AUD is kind of fantastic. Monopushers are few and far between these days, typically priced significantly higher than standard chronographs and seldom offered in a tool watch. Off the top of my head, Hanhart is one of the only other brands out there offering a watch of similar specification, though apples-to-apples I’d side with Bremont any day of the week. Launched earlier in the year, the Arrow is just starting to hit the market now. 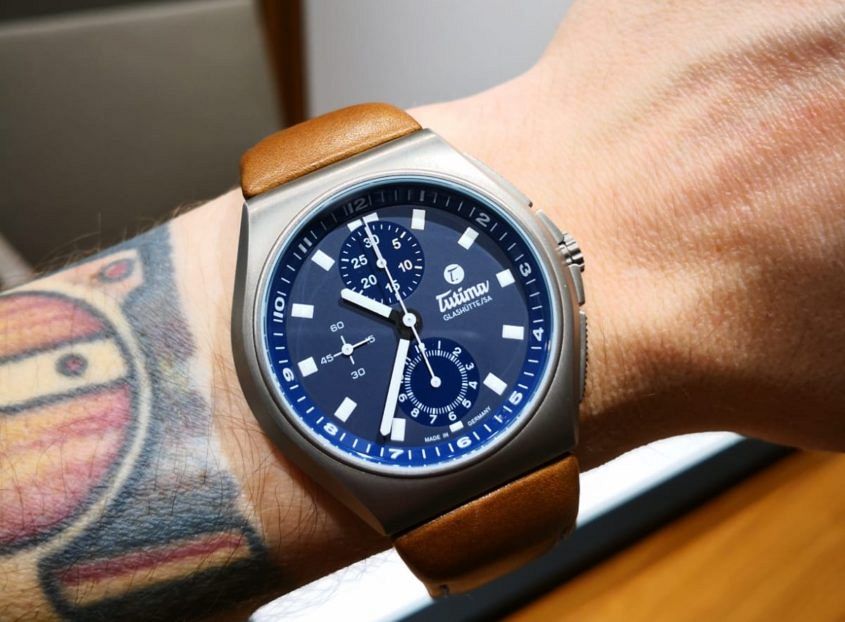 Tutima is yet another brand that always seems to fall under the radar (from whom I personally own three watches at time of writing), and this spring I was given a sneak peek at a watch that I’ve been waiting to see return to their collection for years now. Based on their “NATO Chronograph” — a watch first designed in 1984, and still the service watch of German army pilots — this new Coastline Chronograph marks the return of more compact case proportions to the M2. While recent models have all remained around the 45mm mark — still wearable on account of a shorter lug-to-lug size — this chronograph comes back down to 43mm. Sure, this doesn’t sound like a lot, but as someone who has spent a lot of time with their entire model range, trust me when I say this makes a significant difference in terms of fit and wearability for those with smaller wrists. In addition, the use of a matte dial with darker glossy subdials gives the dial extra character all while improving legibility (a trick they learned with their rare red 85th Anniversary Grand Classic Power Reserve Chronograph from 2012).