Editor’s note: If we’re being completely honest, there’s one clear hero on this list. And it’s the old guy and his Rolex at the end. So if you’re time-poor, scroll on down to the bottom and have a look. Yes, even if you’ve seen it before. It gets better every time. Bless you, Antiques Roadshow.

I have a not-so-secret love in my heart for Antiques Roadshow — specifically the UK version, but the US version is pretty good, too. If you’re not familiar with the concept, it’s a show where random members of the public show up and have their junk/priceless artefacts evaluated by a range of hilariously eccentric antiques experts. 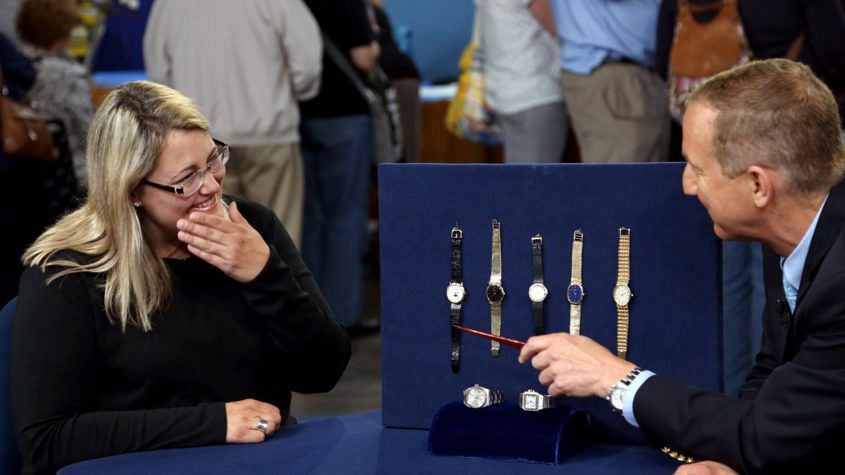 And while a great part of the joy for me is finding out that creepy dolls can be crazy expensive, really it’s all about that moment they reveal the price and the owner of said crazy dolls (or carpet once owned by someone famous) either hides their sadness at not being sudden, surprise millionaires, or — equally as good — when they’re suddenly in possession of something really valuable and they pretend they’re not planning to sell it as soon as the cameras turn off.

And while everything about Antiques Roadshow is pretty great, I especially love it when someone brings a watch on. So, in the interest of sharing my love, I scoured YouTube for five of the best. You’re welcome.

Let’s kick off with some classic Roadshow — there’s a lot to like here. The exceptionally dressed appraiser, the quite lovely watch, the entry-level insights into a fascinating period of horological history. But really, it’s all about that tourBILLION.

I don’t know about you, but for me this video was a glimpse into the future. A future where my descendants find my prized possessions stuffed into a shoe box, and have no idea what they are. I just hope there’s still Antiques Roadshow in the future to help them out. And I’ve got to say, for a watch collection that’s pretty dated in style, old mate had solid taste.

As you might expect, Rolex is pretty well represented on Antiques Roadshow, and this appraiser does a great job of the slow build-up, and telling the story of the watch. Sure, the video quality is terrible, he’s talking in pretty broad brush strokes and glosses over some important details (those aren’t sword hands, mate), and the pricing isn’t even close to accurate anymore, but the ‘wow’ moment is pretty great.

While there’s no single element about this clip that makes it stand out, the whole package is still pretty great. The appraiser is super British (sadly, he’s not wearing a natty sports coat), the watch is quite nice, with a good story, well told. But really, though, it’s the looks of not-quite-innocent-and-a-little-bit-eager on the owners’ faces that get me.

And finally, the big gun. The fella from the first video is back (he’s toned down his jacket though), and he’s chatting to an adorable veteran about his not-so-ordinary Rolex. You’ve likely seen this video before, but it’s worth a rewatch. We can guarantee you’ll still tear up at the end.