The Les Cabinotiers experience in Singapore, which combined lots of quality time in the company of Vacheron Constantin’s Style and Heritage Director, Christian Selmoni, with a stunning tropical plantation style residence as a setting for the big watch reveals, really brought home one of the ‘Holy Trinity’ brand’s key points of difference. It is exclusive to the highest degree.

Vacheron Constantin is not increasing production, despite wait lists and shortages for key models

Vacheron Constantin embodies the notion of less watches, better watches. Even if they wanted to – and perhaps in the process reduce the wait time for those on the list for blue dial Overseas 3 models! – they are unable to meaningfully exceed their yearly quota of 30-50,000 watches. And they’re cool with that. Several conversations with the Vacheron Constantin team – the CEO and new Managing Director of South-East Asia and Australia were present — reinforced the fact that exclusivity is alive and well here. One might ruefully add, ‘whether Vacheron Constantin like it or not’.

The Les Cabinotiers department reflects the essence of Vacheron Constantin

On a similar note, the Les Cabinotiers department embodies the notion that haute horology is an exclusive field by its very nature. The watches on display here are either commissioned by the world’s elite, or entirely intended for them. This a connoisseur’s world.

But, popping our heads above that rarefied air for a moment, the Vacheron Constantin timepieces unveiled here also tend to remind you that watchmaking should, at its heart, be playful, questing and, most importantly of all, personal. The playful part is what Selmoni calls ‘the twist’. “Vacheron Constantin,” he says, “is quite like that English gentleman in London, who dresses in a classic fashion, but always has a twist to his outfit. Whether it’s vibrantly coloured socks, or a flamboyant pocket square. Patek is serious with what they release, always. We are serious, obviously, but we can present a twist in our watches. A little ‘Sprezzatura’ as the Italians say.”

The playful part is what Mr Selmoni calls ‘the twist’. “Vacheron Constantin,” he says, “is quite like that English gentleman in London, who dresses in a classic fashion, but always has a twist to his outfit. Whether it’s vibrantly coloured socks, or a flamboyant pocket square. Patek is serious with what they release, always. We can present a twist, a little ‘Sprezzatura’ as the Italians say, in our watches.”

Les Cabinotiers is not a new concept

The tradition of personalising watches for clients is not a new development for Vacheron Constantin. The practice dates back to the 18th century, when master watchmakers were called cabinotiers. Their workshops were located on the top floors of Geneva’s buildings to ensure the maximum amount of natural light. The timepieces created by cabinotiers, many of them still unparalleled in the modern world, especially considering the technological limitations, were inspired by astronomy, mechanical engineering and the arts. This expertise has continued in an unbroken line since 1766, and it was pulsing in the five watches that truly stood out at this Les Cabinotiers event. 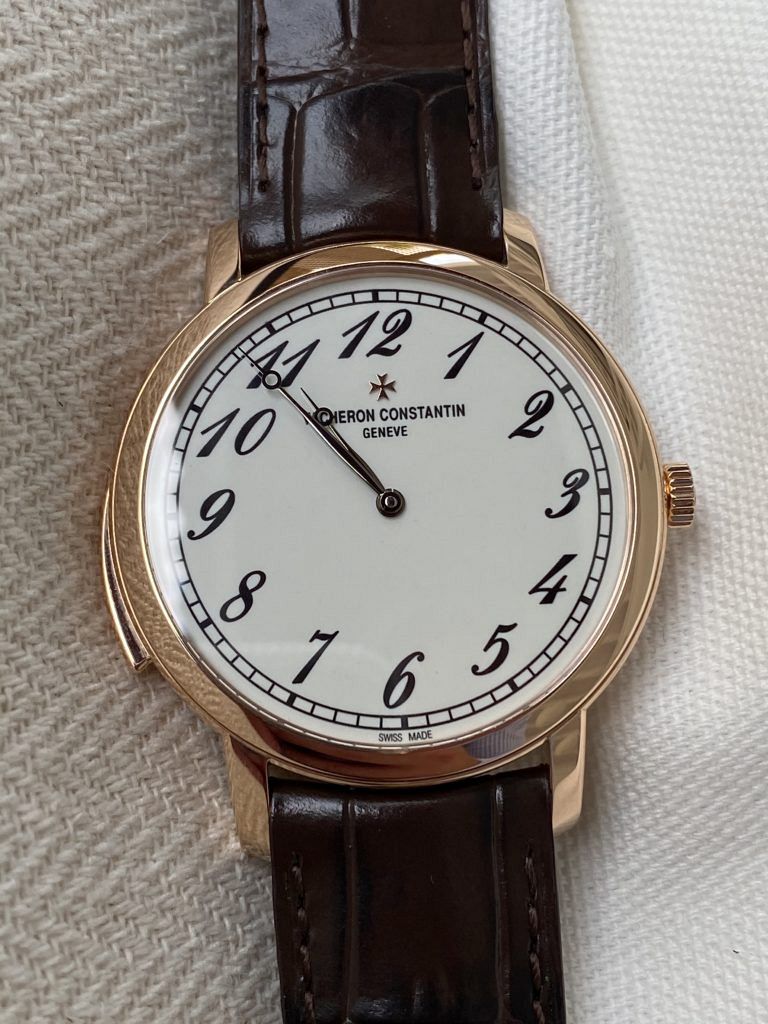 The challenge: Create a striking movement that is slim (3.9mm for the movement, and 8.5mm case), make sure that the tone is pure and house it in an aesthetic package that is ‘romantic’. This was achieved with various breakthroughs in the creative and technical process.

The solution: In terms of its acoustics, the 41mm case in 18k 5N pink gold, has been designed to allow the air to circulate between the movement and the case. The dial is crafted in Grand Feu enamel in an eggshell tone.

The twist: The romance of the package is turned up to 11 with the font, commonly used on railroad-related timepieces. It is clearly the hero here. The slightly larger than expected, and heavily leaning, Breguet-style numerals give the piece a one-of-a-kind personality, to match its official one-of-a-kind status. And the slide piece on the left side of the case shows that its charms continue beyond its very pretty face. 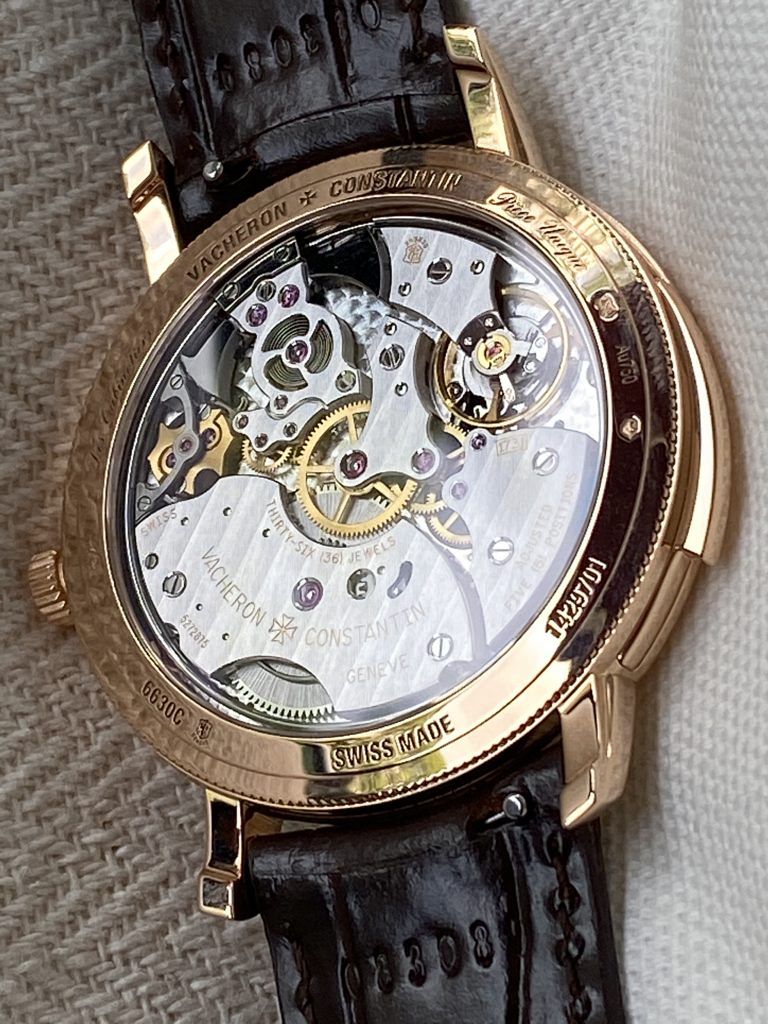 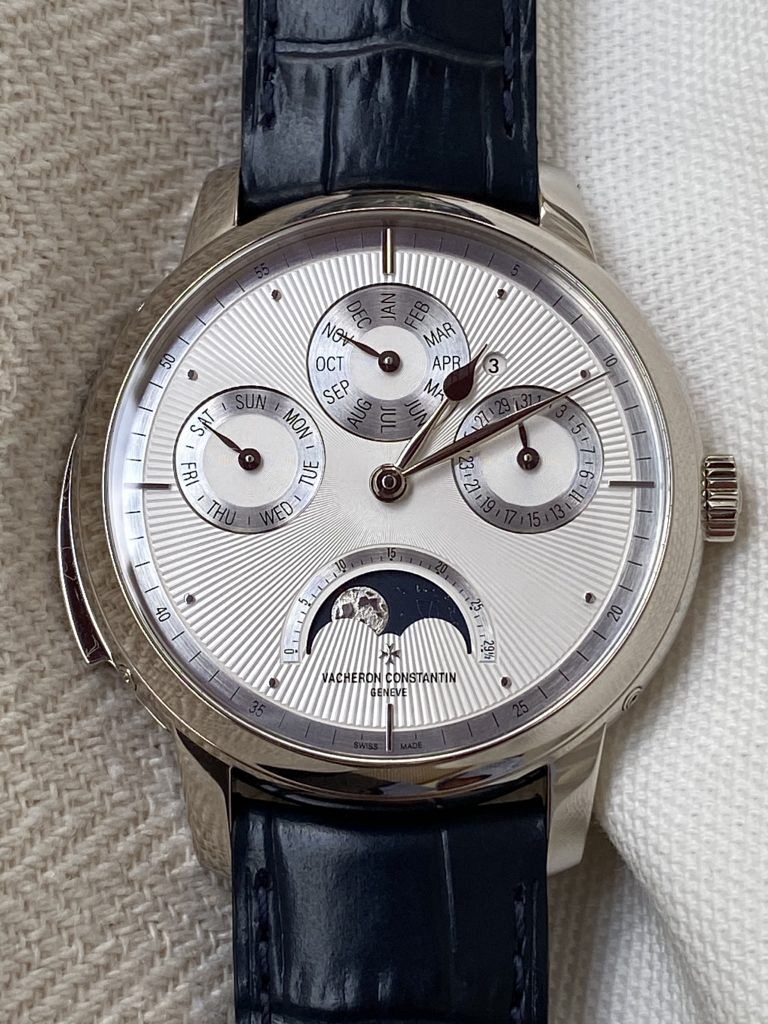 The challenge: Once again, make it complicated and make it slim! Taking two of the most sophisticated complications – a minute repeater and a perpetual calendar – altogether comprised of 438 components, and fitting them within a slim movement (which measures just 5.7mm thin) to be housed in a white or pink gold case is no beginner brief. And, of course, this had to be achieved without compromising precision, reliability and user-friendliness.

The solution: Watchmakers were able to add a perpetual calendar movement to the existing 1731 QP calibre. The ‘1731’ is in reference to Jean-Marc Vacheron’s birth year. This minute repeater movement is renowned for its extreme slenderness. The resulting layout is as classic as it gets; there are calendar indications of days, dates and month, positioned at the top of the dial, which has a sunray guilloché motif.

The twist: Frankly minimal here, this is a buttoned-down classic in all possible ways. Perhaps the leap year indication, a little aperture between the month and date sub-dials. Note also the subtle minute circle in the chapter ring. 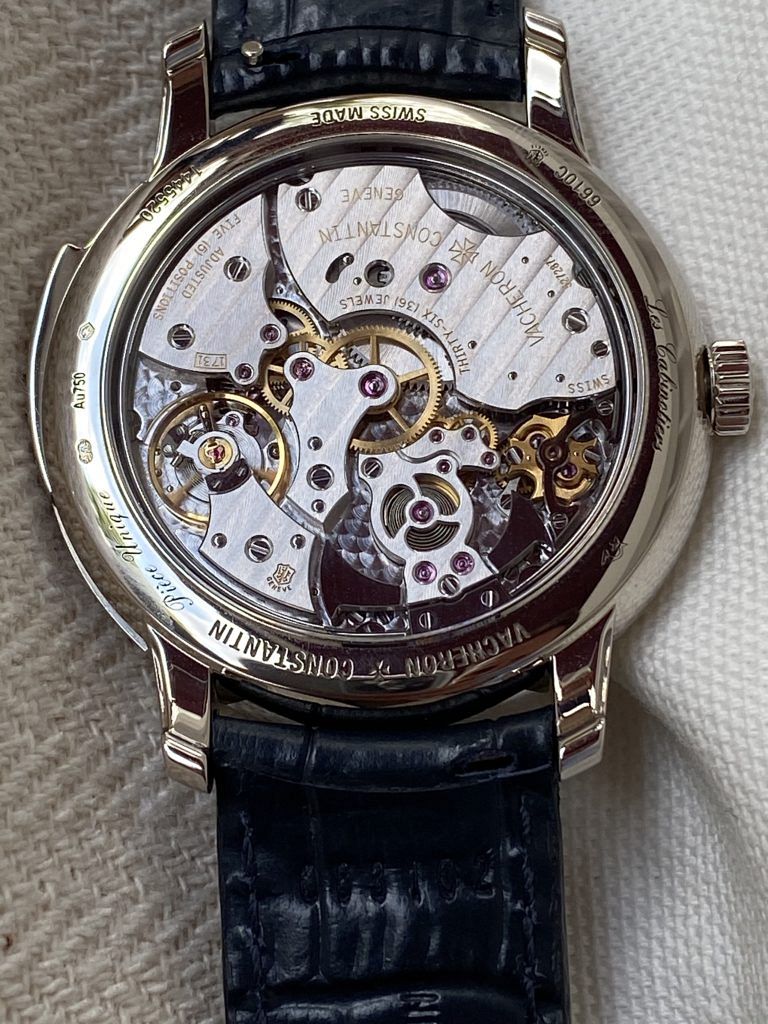 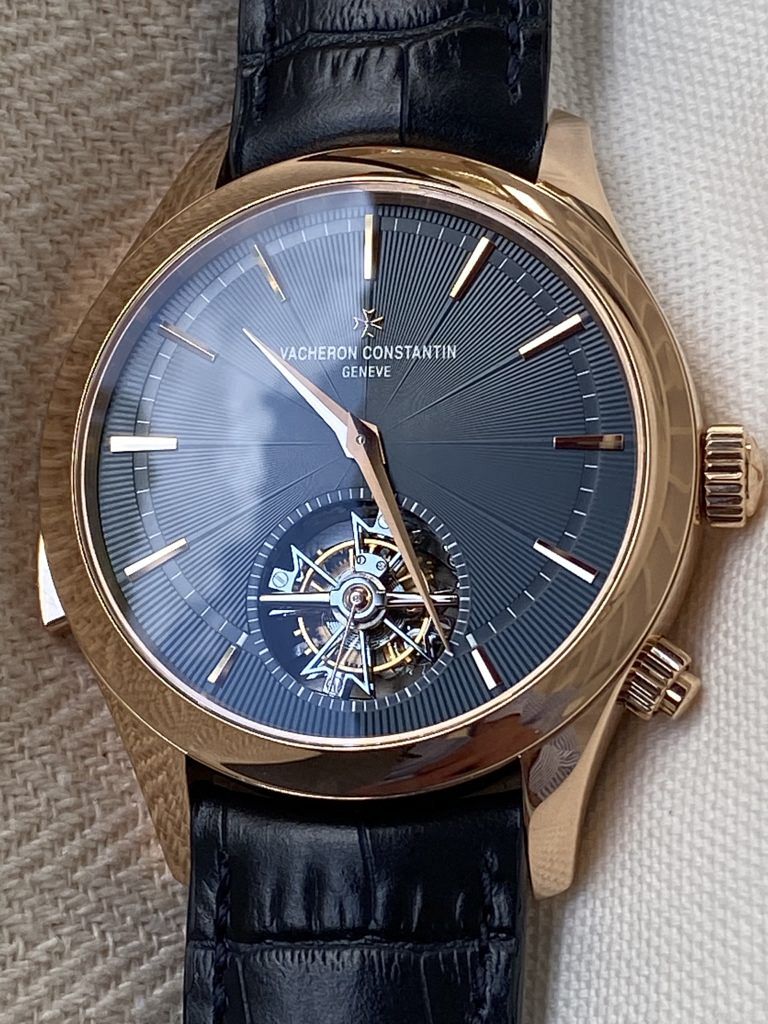 The challenge: Give people the time, as well as their spatial bearings in the galaxy via a rotating map of the celestial vault above us (well, those in the northern hemisphere to be exact), all in a chiming watch with a tourbillon. Too easy, right? No, it was absolutely as crazy to integrate in one wearable package as it sounds.

The solution: The creation of the Calibre 2755 TMRCC, with no less than 413 components. It is derived from the 2755 calibre, a Vacheron Constantin signature movement found in particularly complex models. This manual-winding, 45mm version with a 58-hour power reserve is equipped with a one-minute tourbillon with the small seconds hand installed in alignment with the Maltese Cross tourbillon cage. The jaw-dropping blue dial features both guilloché and a sunray finish.

The twist: Takes this watch from amazing to somewhere else altogether. Because the sky chart visible through the caseback is not flat. It is not flush with the sapphire viewing window. It is, in fact, a concave construction designed to accentuate the depth effect. It tricks your eye into thinking it is looking at a scene akin to a real sky. This vaulted viewing window offers a striking aspect of the Milky Way and the constellations that appear in all their brilliance, truly as if through a telescope. This celestial table performs a complete rotation in 23 hours and 56 minutes corresponding to the sidereal time which is displayed on the periphery, accompanied by the indication of the day, month and cardinal points. A clear ellipse portal drawn on the sapphire crystal highlights the exact position of the constellations at the moment the watch is viewed. 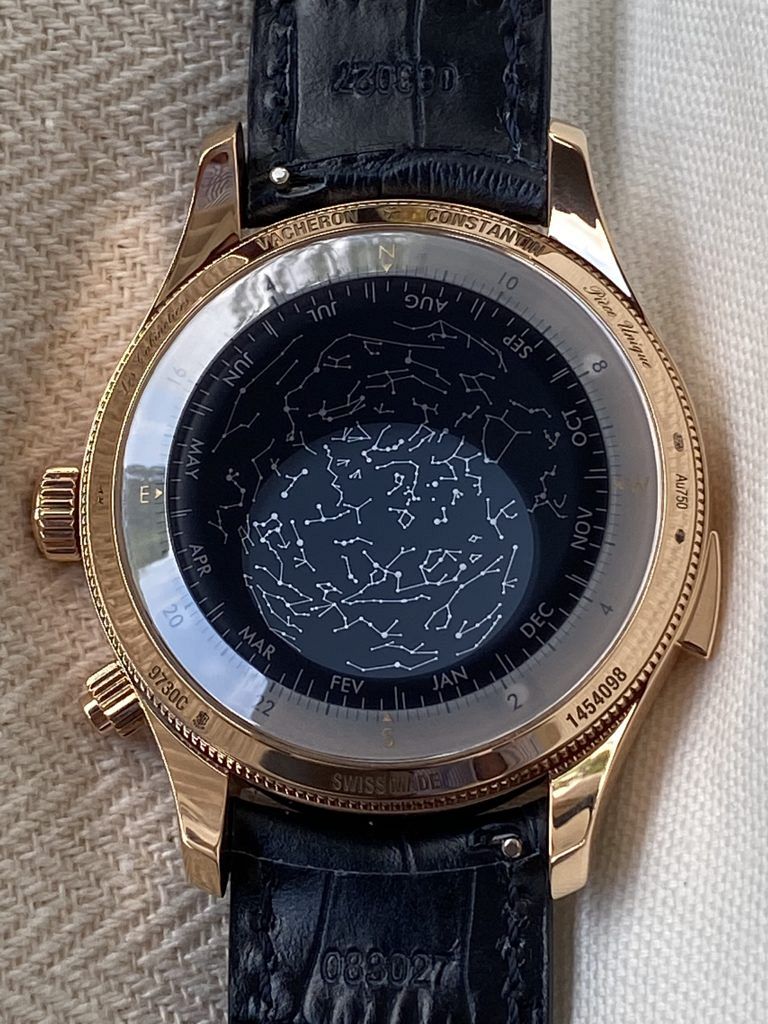